Safe and sound in Santa Fe.  Now that the trip is over, I can talk about it.

The Escape From Red Dirt was something else.  I don't know if I can really convey what that was like without you being there.  I started with this... 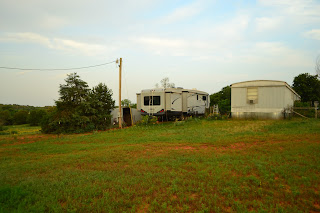 Before I could even start I had to remove a fence from in front of the RV, from behind the RV and then through the intended plan of travel in the left of the above picture.  And all with temperatures in the mid 90's.  Once the fences were down, we came upon the second problem. 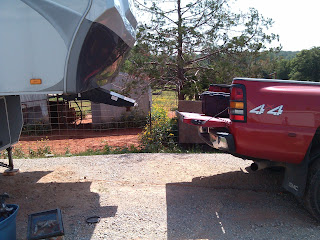 The rains accompanying the last rounds of tornadoes washed away large swathes of the gravel that made up the RV pad.  So the truck was tilted nose down. booty up.  So I used rocks the kids had dug out of the ground and some pavers to lift the front end of the truck.  I had to get out and move the pavers and rocks every time I had to adjust so that the hitch would line up.  Eventually, we got hooked up.  Time for a break.

After a snack and some water, I started backing down the steep dirt hill.  We almost bottomed out in two places, but some quick shovel work fixed it.  It was a slow process of move two feet, get out and look, move two feet, get out and look.  But we got down.  Then we had to go up and weave through a few obstacles.  Eventually we got to the gate.  Continuing the theme of making us work for it, the angle to get out of the gate was acute enough that we couldn't make the turn.  So we had to drive out heading the wrong way, back back into the driveway and then exit again later...after another break.  All told, the exiting portion of the adventure took probably 4-5 hours.  Then we had to drive to the other RV park, set up and then drive back to Miche's to fix the fence.

A pain in the butt, but all told it was less work for us than for Miche.  I still can't believe she was nice enough to build an RV pad on her land and let us use it.  I mean, I can believe it because she is nice, but...I'll just stop talking.  Thanks Miche.

That was just the exit.  The next day the drive started.  sheesh.  More tomorrow.