For that one guy.

There was one guy on the Duramax Forums who wanted to know more about the valve adjustment because he was going through the same thing.  I hate for him to go uninformed.

I woke up today and felt like crap.  But, the weather is going to take a turn for the frigid soon and that makes work suck too.  So either way.

I went down to the garage today armed with some papers.

This link explains it better than I possibly could right now. It is what I used coupled with a list of torque values I found on The Diesel Place forums

It took a couple of hours. That included cycling the engine by hand a few times and rechecking clearances. I will probably do that again before I put the valve covers back on just to be sure.

There was still daylight, so I kept going. I put in the glow plugs and thought about injectors, but decided the exhaust manifold needed to go on first.


The exhaust manifold defeated me for the day.  I couldn't get the top back bolt past the gasket and threaded.  There is a nut that I needed to adjust to get the head in place and again to line up the manifold.  I got literally every nut in pace, except the top back one.  In frustration, I went to the driver's side, which was worse.

When the kids came in to see if I was alright, I should have quit.

When the snot was dripping down my face because I was using both hands, I was shaking and cramping, then I quit.

I'll deal with the cold weather.

Posted by Adventure Nickel Farm at 7:20 PM No comments:

Putting it all together

Or, at least the pieces I can find.

So, I didn't get a lot done over the holidays. Now, I have three days off and that means truck work! Except for this cold we all came down with. That says get in bed and stay there.

Now, let's put some pieces back on.

Armed with the sequence, I took the 17mm socket off of the regular ratchet and put it on the small torque wrench for the first step. The directions call for three equal steps to reach 125 ft/lbs. First step was to 42.  Life, the Universe, and Everything. I lubed up everything with the supplied pooky and went after it.

But, when I started on round three, a problem appeared.

First bolt, around the second turn, the wrench slipped off.

That isn't good.  Not at all. The nut seemed to be fine. The socket showed a little damage.  Maybe I had it crooked.

Nope.  Second pass at it went the same.

Maybe it's the nut. I decided to try the number one nut on the other side. Same result.

Maybe it isn't the same 17mm 12 point socket.  Maybe these bolts are different.  Let's see if a 16mm fits on there better. There was a little play in it, after all.

Crap.  Another run to the store for a new 16mm 12 point socket. That's nearly an hour round trip.

But hey, had to happen.

Worked like it was meant too.  Add that little nugget to my knowledge base. The ARP stud nuts are 16 mm.

Step three torqued fine.  Then it was off to chop some firewood.  It's cold and our house has many drafts. What kind of jerk put the walls up on this place?

Today I went out and installed more stuff.


Then I put on the rocker arm assembly.  I went to look at the torque values on the sheet I printed, I don't have reception down at the garage, and it said some number in in/lbs.  Well, my wrench is only in ft/lbs. How do I convert that?

I don't.  I go home and look it up.  And, when I got home, there was hot coffee waiting and my lovely wife and son were reading the book I wrote.

My head cold is making me feel all weird and fuzzy headed.  I think I'll get back at it tomorrow. 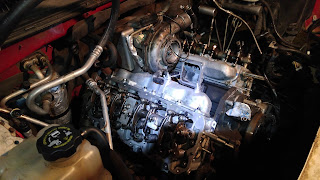 Posted by Adventure Nickel Farm at 6:15 PM No comments: