No matter how often you do it.

What's that you say?  Change is hard for the cast and crew of the Adventure Nickel?  Balderdash!  Poppycock!  You guys change everything up all the time!

We move locations around every three months.  We change addresses, grocery stores, entertainment venues, running routes, everything.  This is change we are good at.  We have done it so long now that this change is normal.  It barely counts as change.  OK, so it is still an obstacle, but a known one.

All of these things are part of who we think we are and it is scary to change who you are even if it is sometimes good for you.

True change is hard...and scary.  Going from a suburban homeowner and staff nurse to a RV living travel nurse was identity level change and it was scary and stressful and worth every bit of it.

Going back to a stationary life with a regular job is scary too.  I don't know what we will do, how it will work out or whether there will be a continuing blog, but we have decided it is time to try this idea out and see what comes of it.

Just like the cruise ship, the escape hatch of traveling as an ER nurse will still exist, but we want to give this an honest try.

Oh yeah, about that ER nurse thing.  It may be time to give that a rest for a while.  I don't talk about it on here much, we try to keep it upbeat and family friendly, but working ER can be hard on a person.

All that being said, we plan on settling down in Washington with me working as a nurse in a correctional facility for a while.  You didn't expect me to go completely normal did you?

It's been a while

Hard to believe it has been over a month since I last posted something on here.  Shameful.  Go ahead, dock my pay.  I deserve it.

We went to Houston to visit the world famous Papa and Grandma.  That was awesome fun, but I forgot the good camera.  Most of it would have just been pictures of me sitting on a couch with food stuffing into my face and a drink nearby.  Great times, just not particularly photogenic.

So...to make up for the lost time - come back big or don't come back at all...I present to you.

We have a friend, Annika, who lives not too far from Yosemite.  She graciously agreed to watch Satchel while we were visiting in Houston.  Yep, she was willing to dog sit for three weeks.  We noticed that she only lived about 90 minutes away from Yosemite.  You do know that is one of the bestest national parks out there right.  This is bucket list level stuff.  We had to go.  It was a beautiful weekend and we were off.

There were a couple of things of note, prior to our arrival at the park.

California is in a drought.

This is very similar to what Lake Shasta looked like when we drove through that way.  Water is a precious commodity, please don't waste it.  This story is the same all over the state.


There is another side effect of the drought.  We got our first taste of it on our way out to the park when we stopped at ... 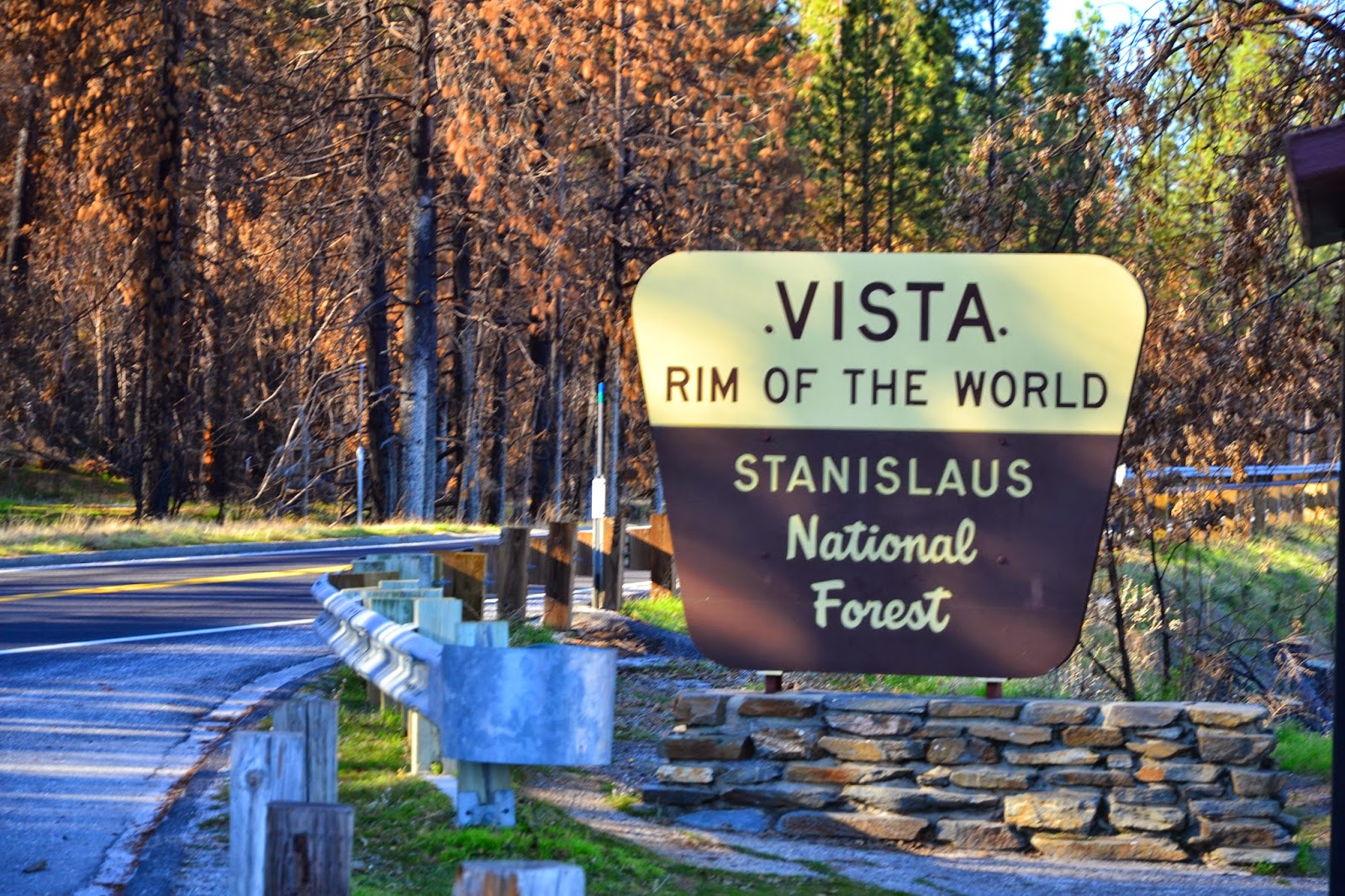 This overlook was where they derived the name for the Rim fire which burned 257,314 acres in late 2013. 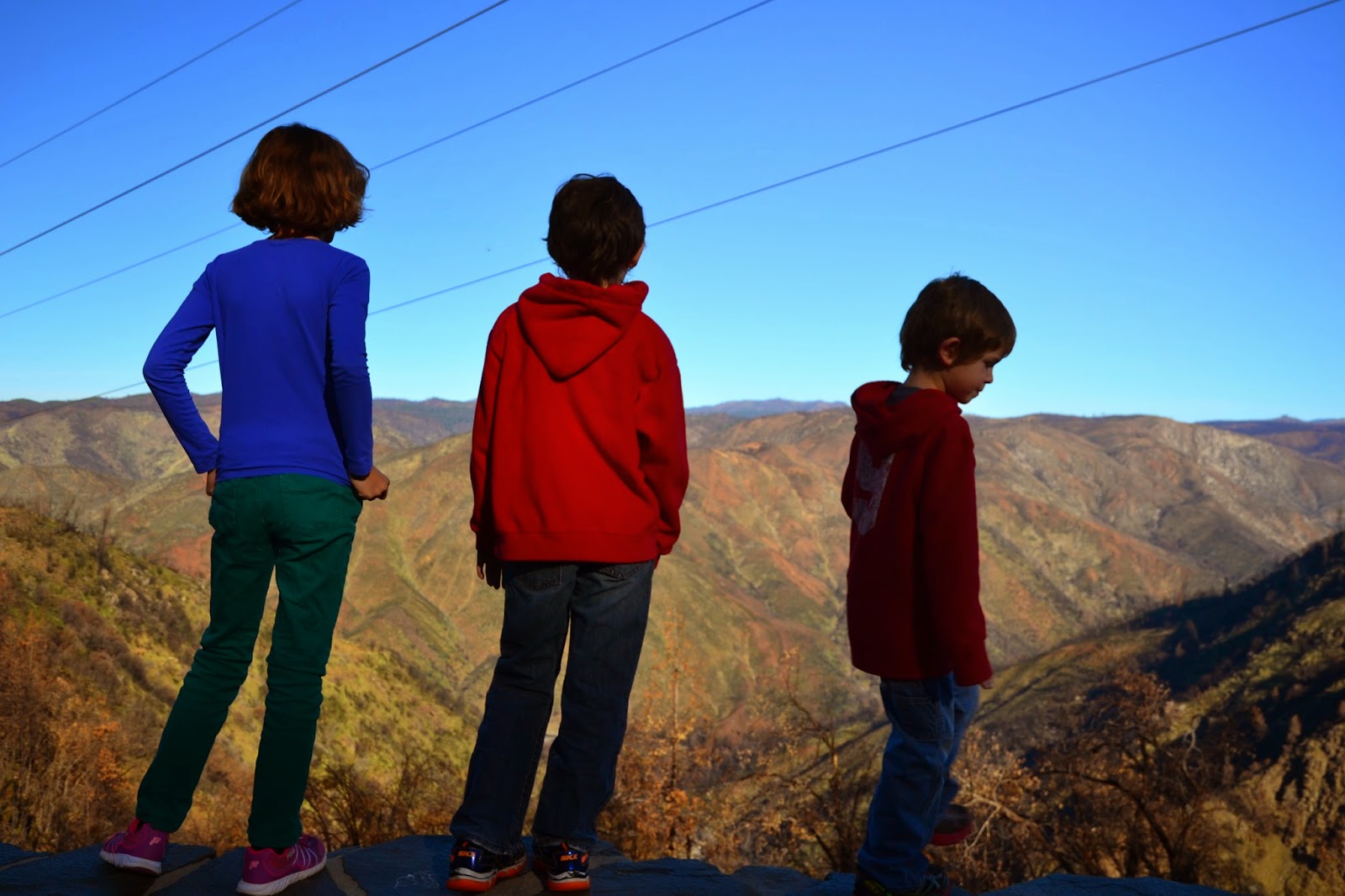 But, enough depression, we came for the pretty stuff. 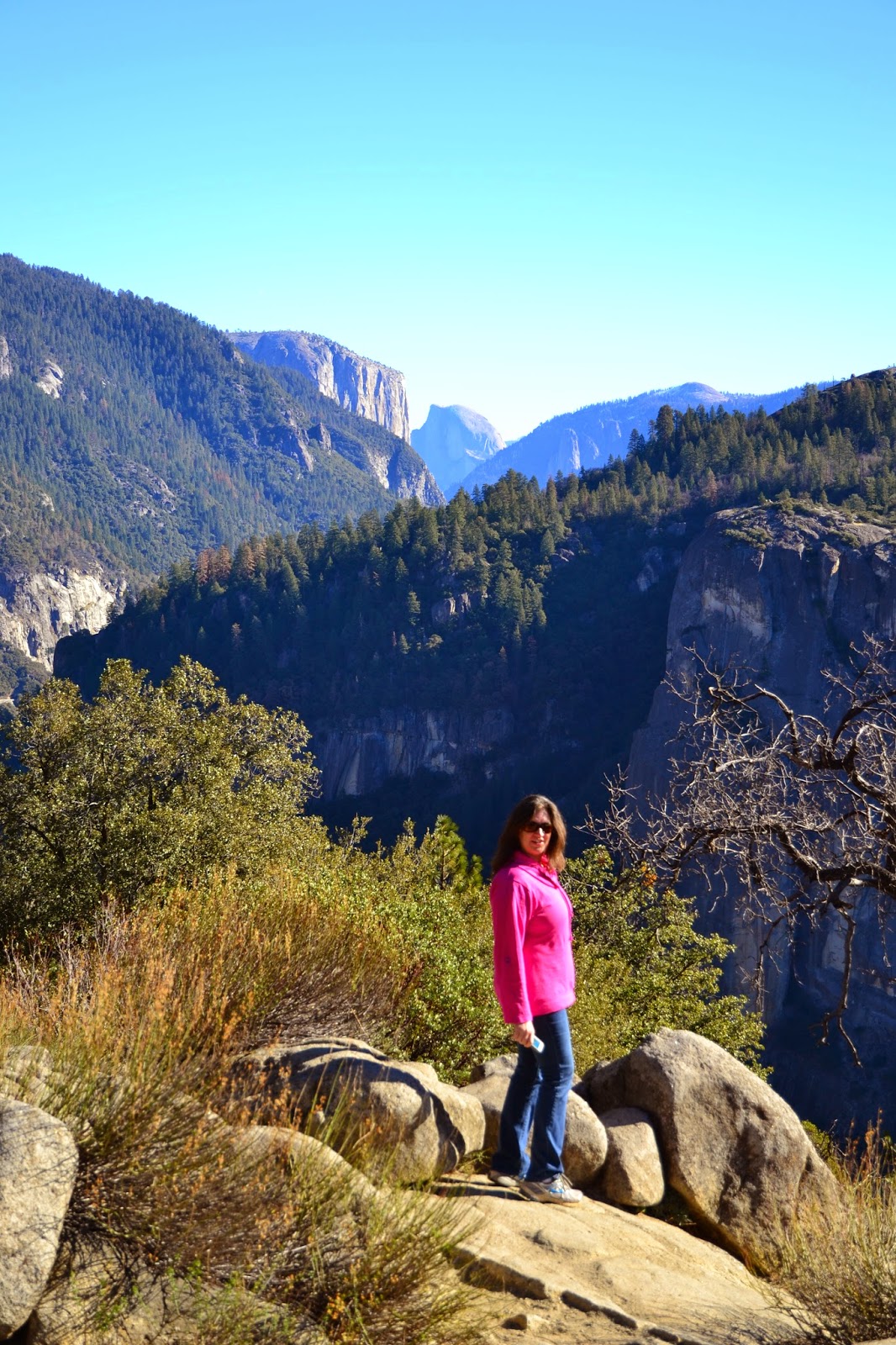 Driving deeper into the valley, we encountered some superlative examples of one of our favorite things.

At this point, I was reasonably overwhelmed with awesome.  Then there was this guy.

There was so much going on.  I don't really know the layout of the park either.  I hadn't even seen a map, really.  You could see half dome off in the distance, but everything else was just pretty.  Like this.

Then we got to a spot that I recognized.  As something of a waterfall aficionado, I knew that the tallest waterfall in the continental United States is right here in Yosemite. 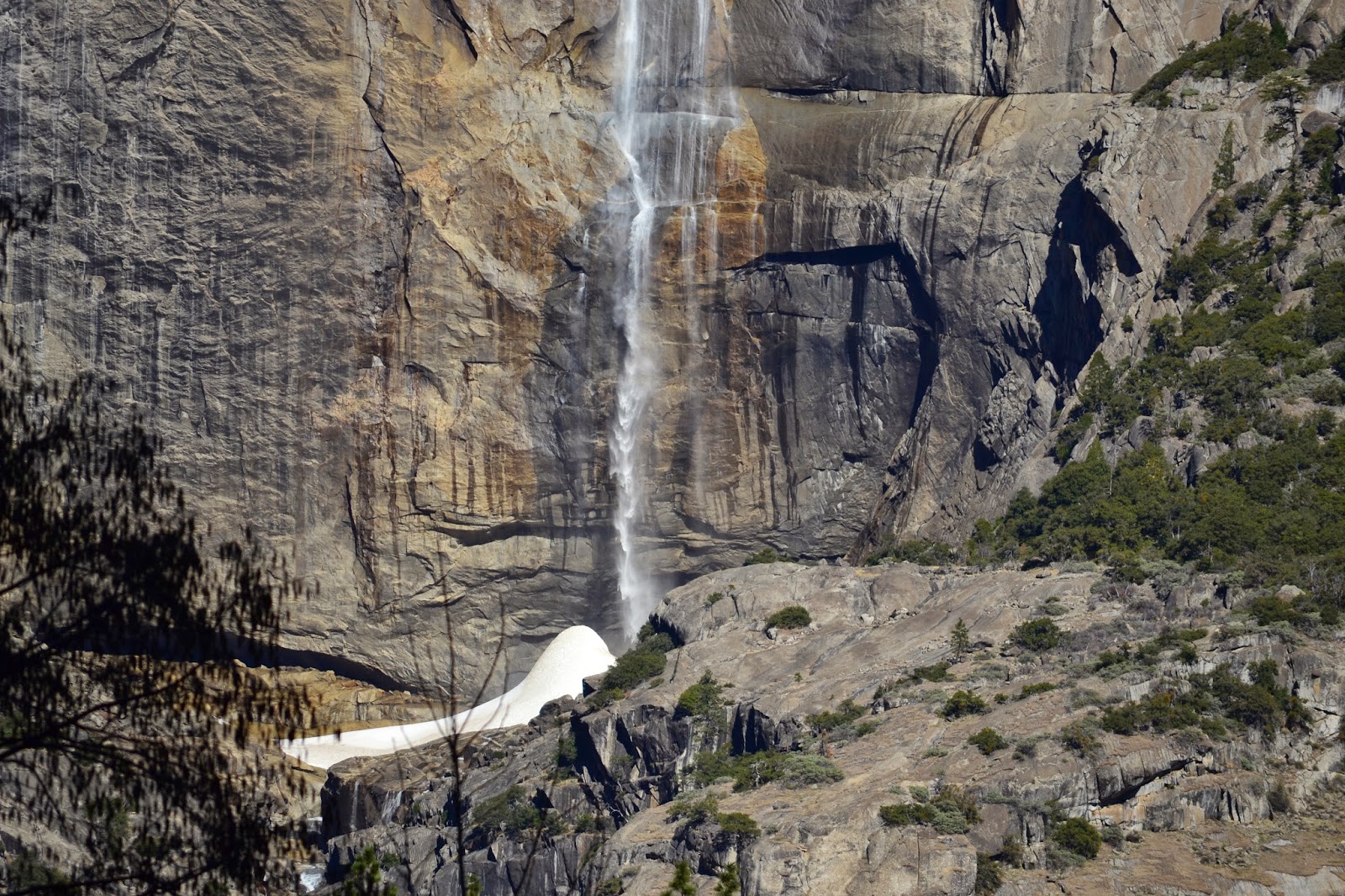 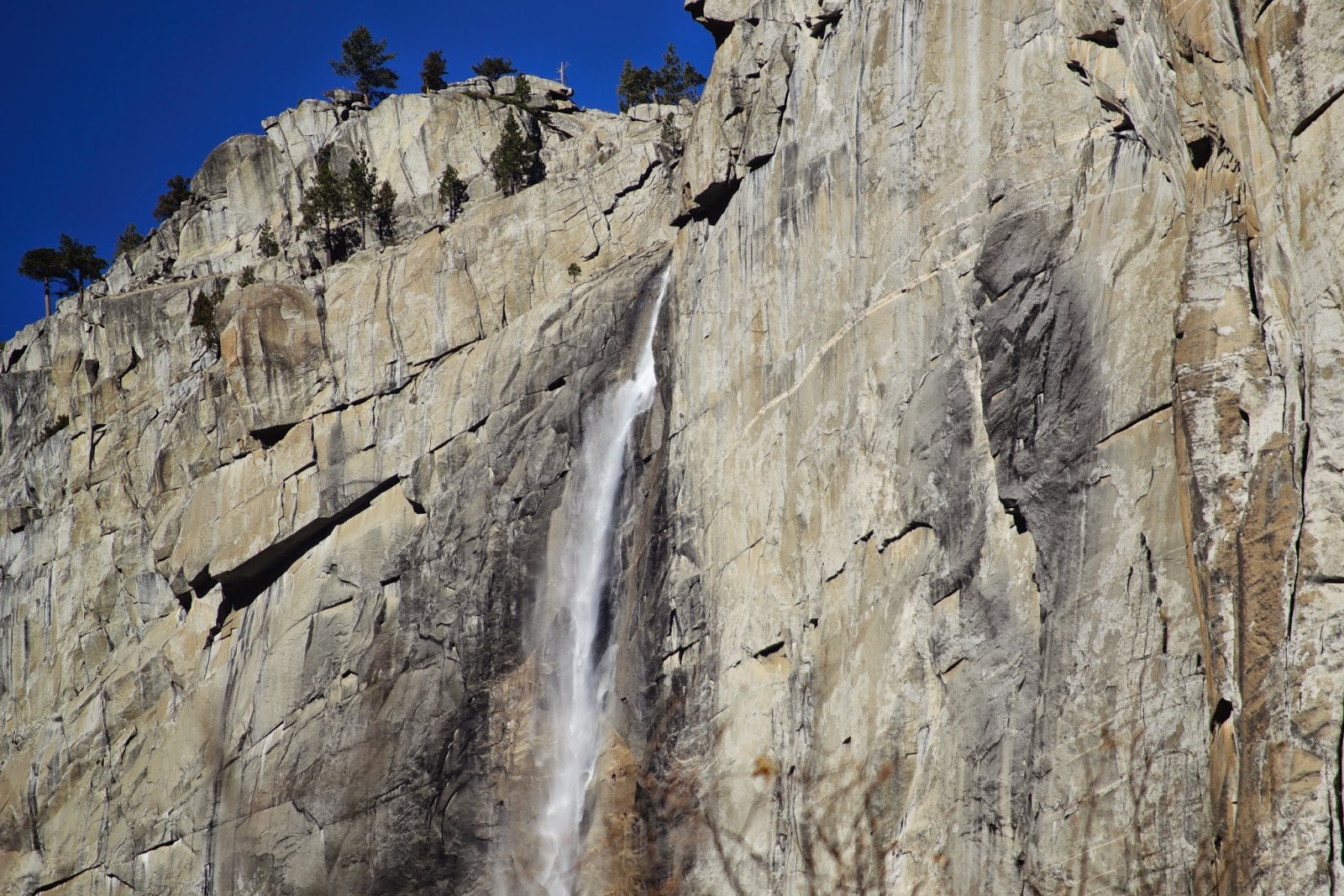 We hit the visitor's center for some education and then it was time to get out on some trails.  There are enough trails out on Yosemite that we could hike there for an entire season and never repeat a trail I'm sure.  We had but one day. 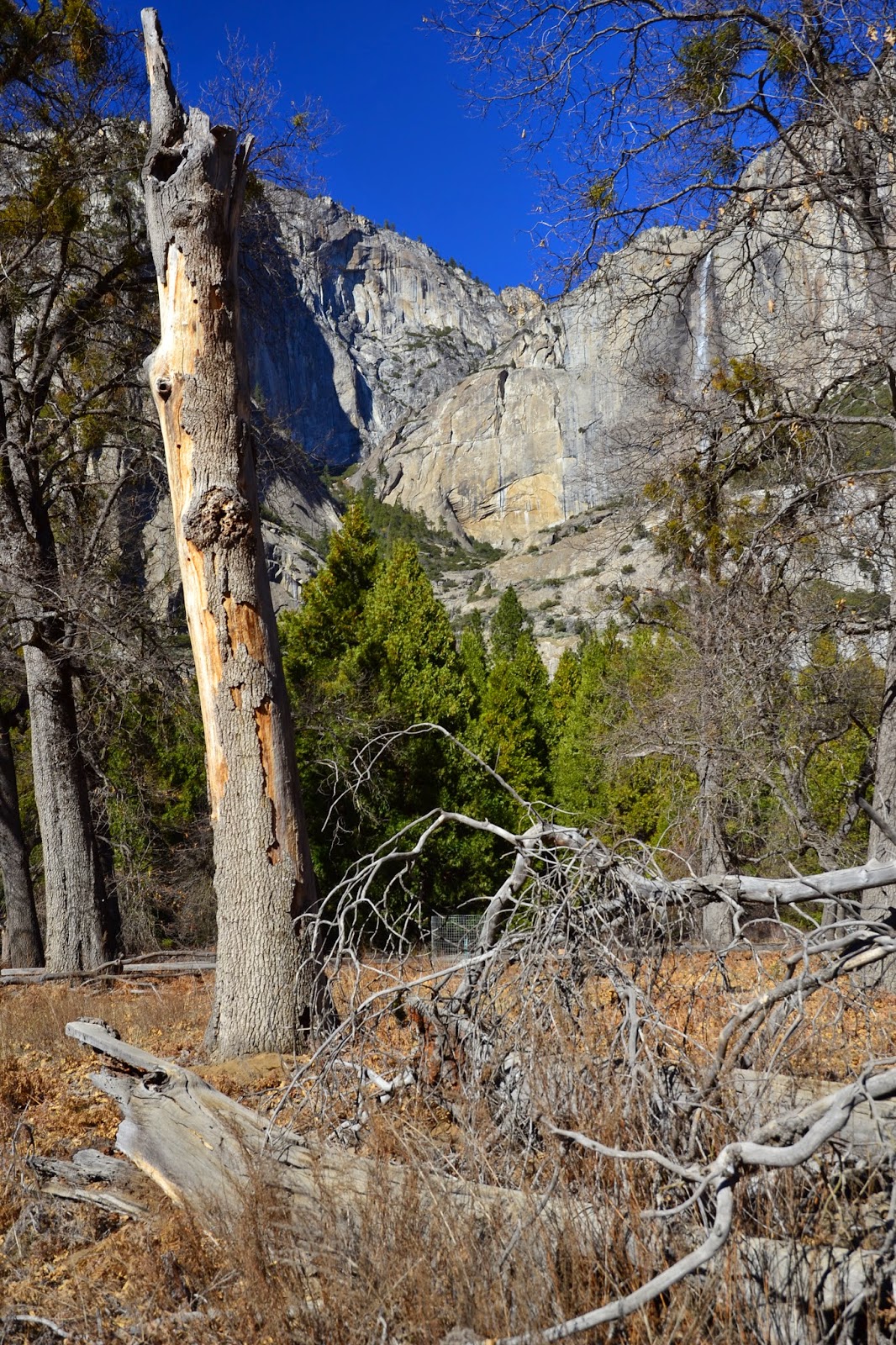 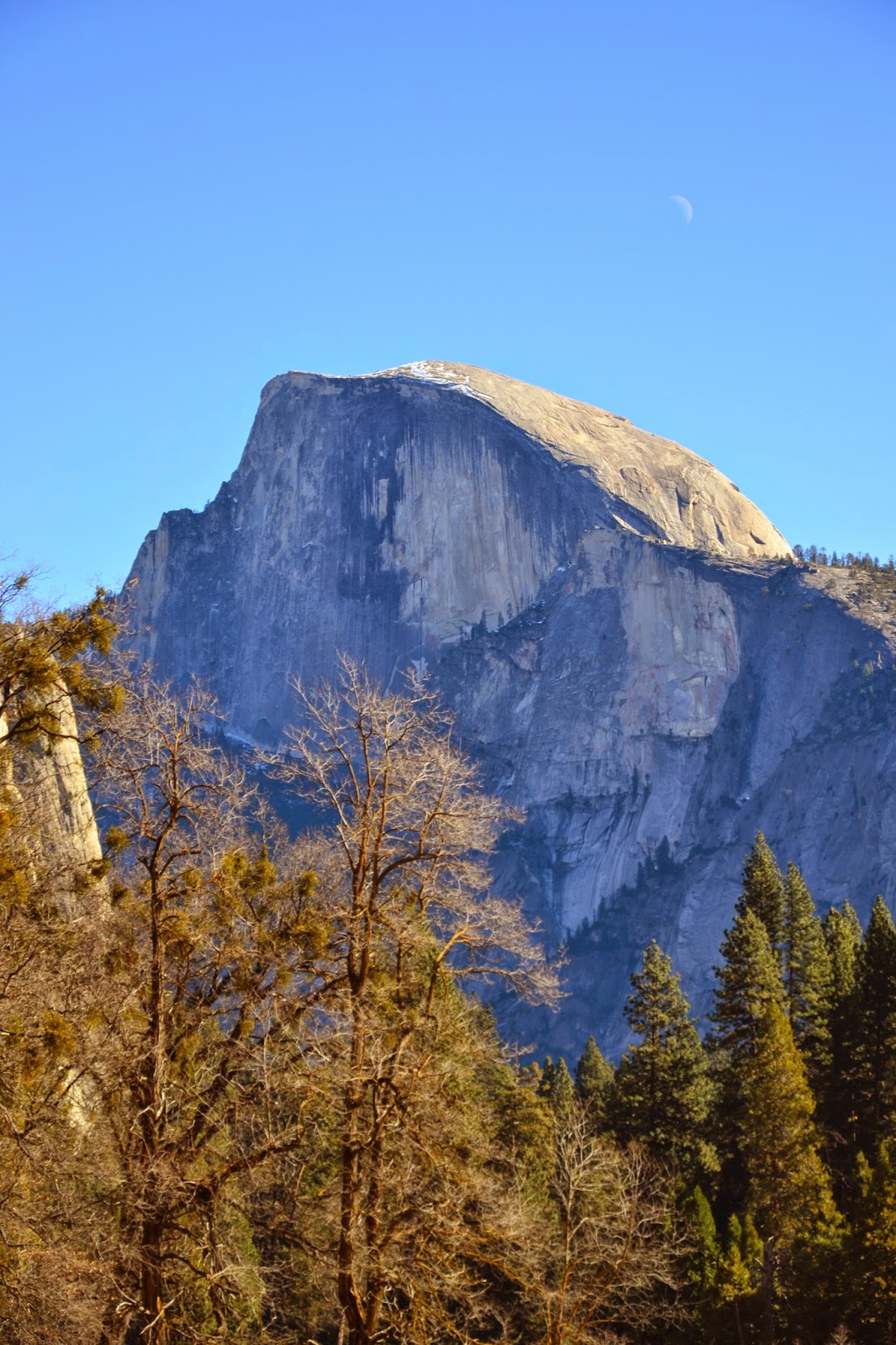 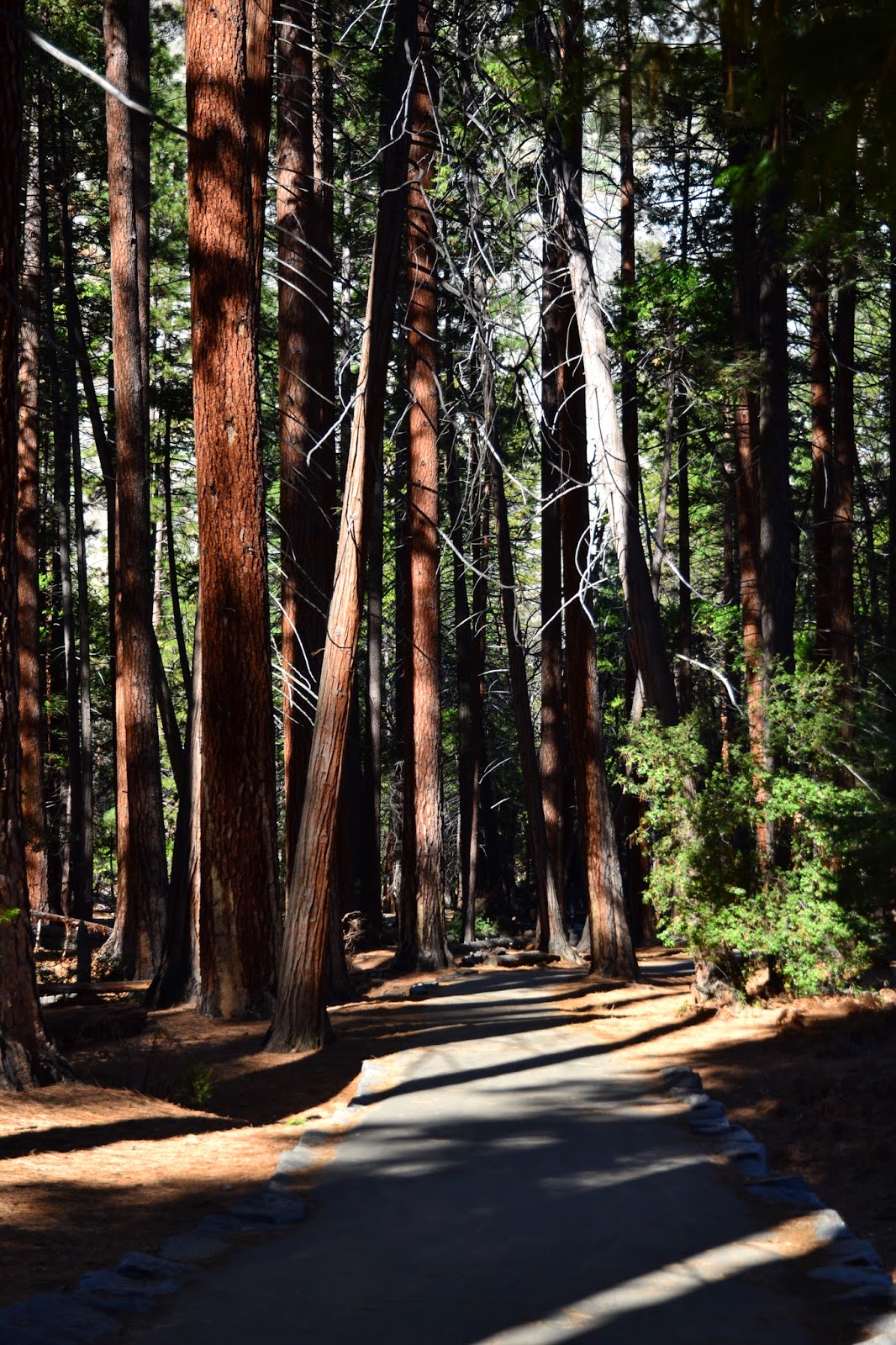 And where, oh where, would our hike lead us?  Someplace, perhaps, near water.  Someplace we can scramble around on slippery rocks?


We saw some climbers while we were up there.  I really need to get out and climb more.  It looks so fun.

Of course, we were doing some climbing of our own.


Unfortunately, we had to go.  There was still a decent drive back, food, and the realities of real life that had to be dealt with.  It was amazing to go and see even a little bit and we really wanted to go back for more.  We need to get up close with Half Dome.

And oh yeah, El Capitan.  Shouldn't we have seen it somewhere?

Annika, and the maps, informed me that we passed it coming in.  Somehow I hadn't noticed what I had seen.  Even though I took pictures of it.  So, we had to stop on the way back because... 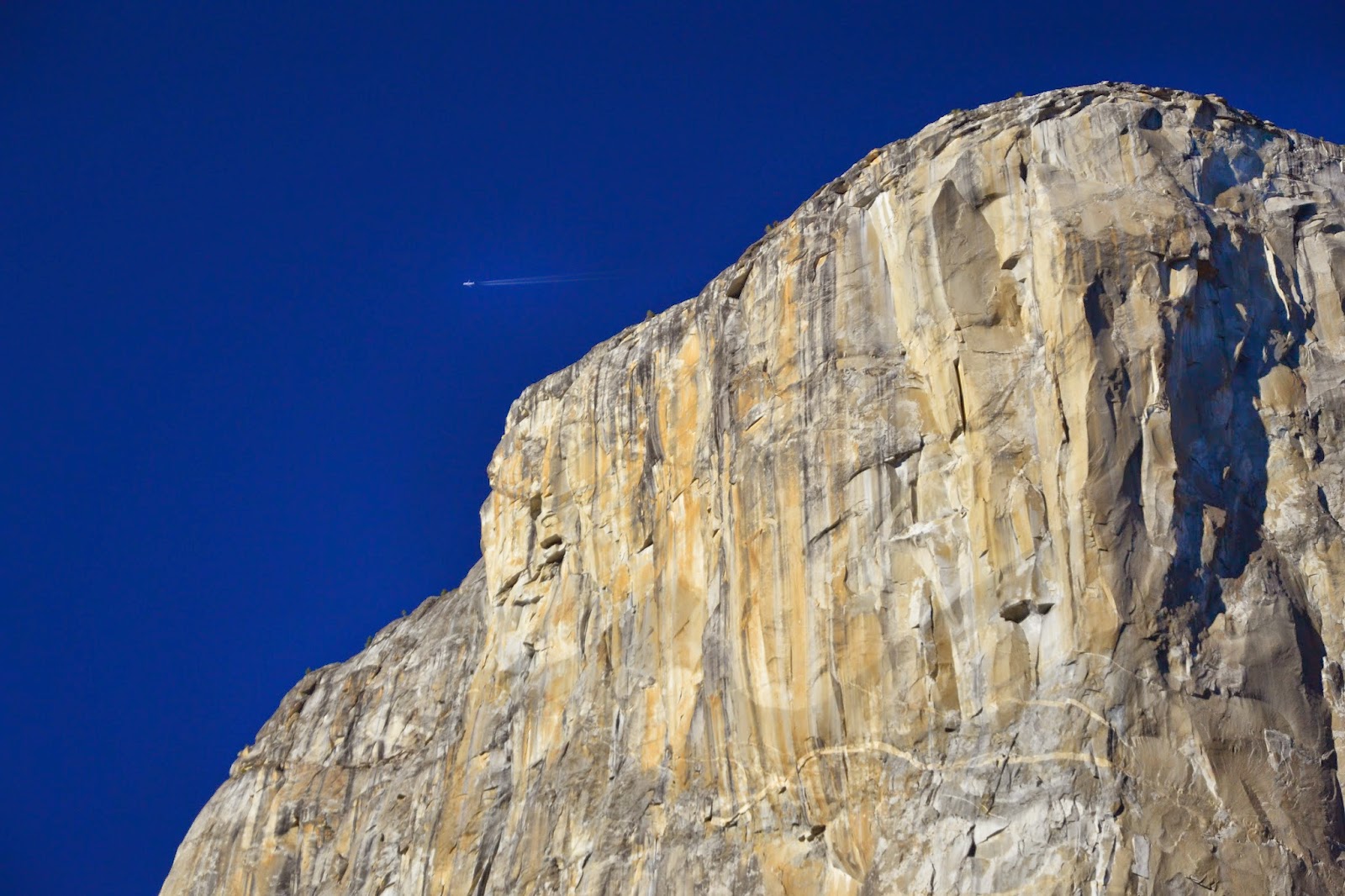 And all of this happened by the most remarkable coincidence.  A chance encounter a few years ago.  Where, oh where did we meet the lovely Annika and Miss Muffler? 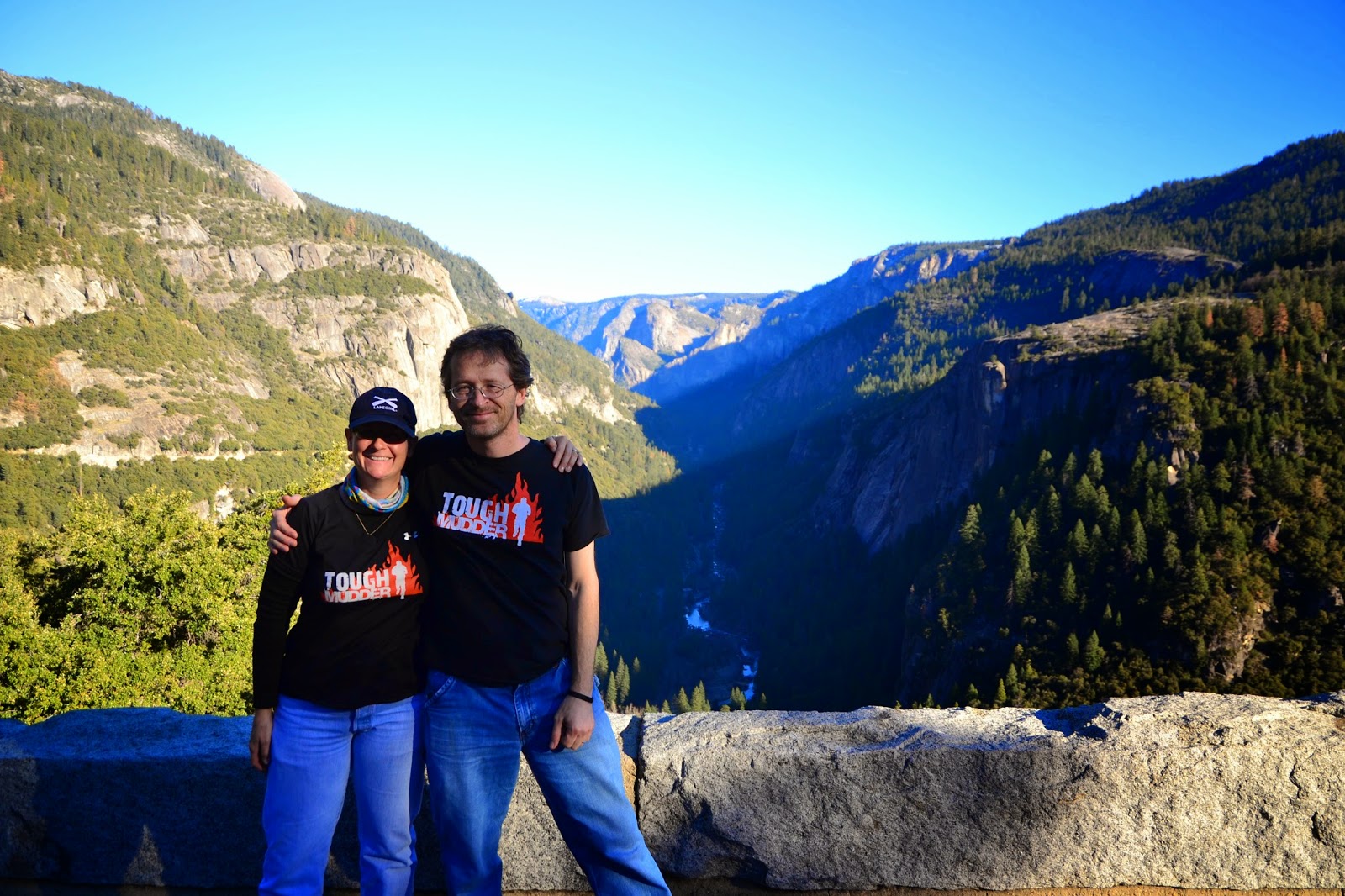 Loved the trip, loved the visit, can't wait to get back.  Thanks Annika, Arianna, and Robert for everything.  We meet the coolest people.
Posted by Adventure Nickel Farm at 9:05 PM No comments: