Changed tires around on the house today.  We had the bubble tire on the trip out and replaced it with the spare.  Finally got around to having a new tire put on the rim so I pulled the spare off and put the new tire on.  Then I took a tire off the other side and put the spare there.  The other tire had some damage and needed replacing.  I'll get to the other two soon I guess.

While I was working I heard Sarah admonish the kids to, "Stop jumping around, Daddy has the house jacked up."  Isn't that what ever little girl dreams of saying?

Also got the tool today I need to repair the slide out cable.  Now I just have to order the repair kit.  Probably will buy two and then be ready when something else breaks.

The salt and marine air is hell on the exposed metal parts of anything around here.  I need to figure out a good way to stop that and repair some of the spots that have appeared.


Posted by Adventure Nickel Farm at 9:05 PM No comments:

Today, like any day I am not working, Max started bugging me immediately to go outside and play catch.  He would do it all day, every day, if given the opportunity.  So, a few times every day I will go out and play catch with him for 20 minutes or so.  He catches pretty well, but he throws very well.  Of course, I am biased.

While I was washing the dog, Max saw some new neighbor boys visiting one of the RV's here.  They were 8th graders from Davis, CA.  Max noticed they were playing catch with a football and somehow got their attention.  Then they started playing catch with Max.  They, and eventually some other neighbors all came out to watch Max throw.  They asked Sarah his name so they could say they knew him when he was just a kid.

After dinner I went out with Max and played catch and I got to witness some of this first hand.  All I heard was how awesome Max was.  Apparently several people have taken notice of us playing catch out there and they are impressed with Max's skills.

Now, another interesting thing happened here.   Michael came out and wanted to play too.  He had been hearing all this adoration of Max and wanted to get in on some of it.  I think he is really used to being the star of the show with his big brain, language and reading skills.  It became obvious pretty quickly that Michael isn't much at catch.  And I'll quote Michael at one point after missing an easy catch, "You have probably noticed that I'm not the best football player in the park."

I was impressed with his ability to assess himself and most of all his ability to let Max shine.  He didn't belittle or try to minimize what Max was doing.  He wasn't exactly doing PR for him or anything, but he seemed to realize that it was Max's turn to shine.

It made me feel like Sarah is doing a great job raising the kids.  :-) 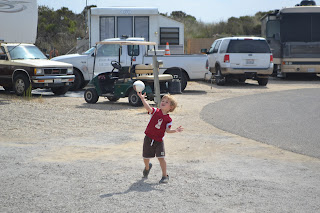 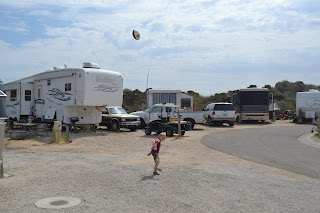 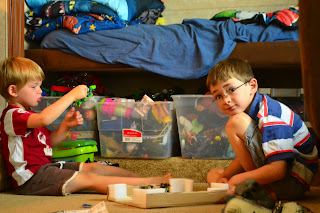 Posted by Adventure Nickel Farm at 10:48 PM No comments:

We got up and did the morning routine as usual.  Then we cleaned the lizard cage.  All good so far.  Then we decided to go into Santa Maria to get some tools I will need to finish a few projects around here.  It was lunch time so we decided to check out a local eatery in Nipomo that I had heard good things about.  It looked like this hole in the wall dive, which is a good start in my book.  Turns out they wanted $9 for their hamburger and up to $17 for their steak sandwich.  Uhhh....no.  So we went to In and Out burger instead.  We hadn't been there before.  When we pulled into the parking lot we noticed the temperature guage was pegged high.  Not good.  As we stopped and shut it down we got a strong whiff of antifreeze. Another not good.  I opened the hood to a cloud of sticky sweet steam for the not good trifecta.

We went inside to get food while the car cooled.  Pretty good burger really and for a good price.  Simple ordering system too.  It was nice to see them making fries from real potatoes there while you watched.  Not a bad deal.  Too bad we didn't find them before we decided to eat a more vegetable based diet.  Actually that is probably a good thing.  After we finished I walked over to Trader Joe's and bought some bottled water. I went back and filled the radiator so I could find out where it was leaking.  The water was seeping out from the entire top plastic portion of the radiator itself.  It was slow enough that I thought we could make it home.  So we filled everything up and drove home.  On the way Sarah called a local auto parts store and lo and behold...they had a radiator for a 99 Honda Civic in stock.  I drove the truck to the store, picked up the radiator and spent an hour or two putting it in.  The old radiator was a crumbling mess.  The fitting for the radiator hose broke off when I tried to pull the hose off.  Nice.

Got the new one off and drove the car to Wal Mart to buy a new coffee pot.  Everything seemed fine.  Heck...with the truck poser steering hoses, the RV toilets and water heater, the Civic's brakes and radiator, if I'm not careful I could end up Handy.

Posted by Adventure Nickel Farm at 9:27 PM No comments:

My never ending battle with procrastination got put off for yet another day.

I did get a run in.  3.78 miles in 30:45 in the Vibrams.  No worse for the wear really.  We will see how I feel tomorrow.  Cowboys preseason football on television tonight.  They looked awful, but hey, football is back.  Still trying to decide if I want to play fantasy football this year.

Found out today that Sarah's parents are coming to stay for two weeks and they will arrive in roughly ten days if I understand the plan correctly.  That puts them here squarely during the time we are supposed to go to San Marcos to see Dad and Julia.  Since we are planning on heading much closer to her parents for the next contract we asked if they would mind us going to see Dad and Julia while they stuck around here and had a mini vacation of their own.  They seemed amenable.  We will see how that goes.

Looking into the possibility of doing the Austin Tough Mudder with my brother Brian in October.  Final decision will rest with the details of our next contract so there is still some play in that plan.  Good day.


Posted by Adventure Nickel Farm at 8:53 PM No comments: