I know you are all waiting to hear about my stupidity.  And, in time, you will.  For now though, you will have to settle for a continuing narrative of the trip before I forget it.  You see, I type this from our campground in Ashland, VA.  We have arrived and are going through our process of figuring out where we buy groceries and take the dog potty.


So, back to Tennessee.  I'll skip the actual driving to Knoxville.

We arrived and started setting up in time for my dad to show up and give us a hand.  We got settled in at the Soaring Eagle RV park before Dad and I went out for a wine run.  Dad has a tendency, on infrequent occasions, to purchase a touch more wine than is technically required for the number of people present.  This might lead to over-consumption of the part of his guests.  Of course, theoretically speaking, this could lead to long and incoherent philosophical debates for some parties involved while other pass out on the couch.

We had originally planned to leave the next day and go to the Great Smokey Mountains national park.  What with the park shut down, we decided instead to stay an extra day at the beautiful Soaring Eagle and recover. 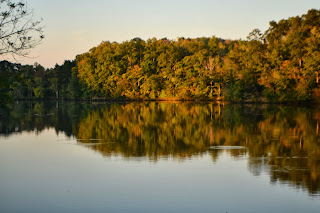 We needed it.  Lunch the next day was a little later than usual thanks to some uncharacteristically sensitive children who decided to just sit in their room and play instead or rousting their parents first thing in the AM.

We didn't do much the next day, watched the Sooners play a close game.  Then it was bed time.


After an alcohol free night (well, except for just a little scotch) we woke the next morning refreshed and ready to hit the road again.  It is always great spending even a little time with my dad.  It was really neat to see his motor home and where he spends so much time.  Pretty place.  It is surrounded by some really pretty places too, as we were to find out the next day on our drive into North Carolina.


Posted by Adventure Nickel Farm at 3:10 PM No comments:

The trip out East. Tennessee, pt 1.

Good grief we do a lot of stuff.


Last we left after our arrival in Little Rock, AR. The RV park there is the North Little Rock RV park which is a city owned and operated park situated on the bank of the Arkansas river. Just above, and I mean almost looming above, the park is an old drawbridge which has been converted to a pedestrian bridge with the transom always raised. The bridge leads over the river to a park near downtown where the William Clinton Presidential library resides. Of course, thanks to the government shutdown, is closed.


Oh well, who needs a stinking presidential library anyway?  It is a pretty bridge though. 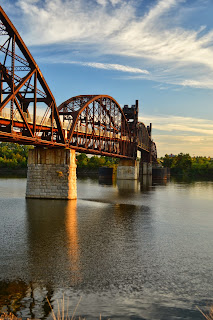 And that was about it.  Just a simple overnight visit, nothing fancy.

Our next day took us across the state of Arkansas and stopped just before we left.  We had to stop though, because it was the Tom Sawyer RV park and it was on the banks of the mighty Mississippi river.  I mean literally a stone's throw from the water. 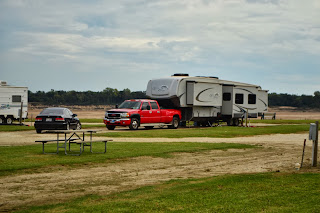 They also had fishing ponds on the property that were occasionally stocked by the flooding river.  That meant that you could catch anything in there.  I caught a small gar and Max caught two turtles.  Mostly it was just relaxing for the kids and changing bait, tying hooks and lures for daddy. 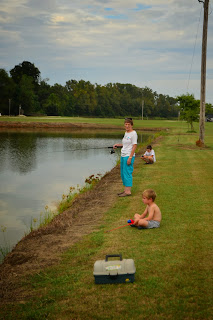 Eventually Nana decided just relaxing and watching the river traffic glide by was good enough for her. 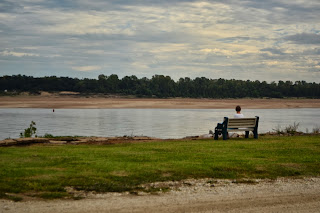 The next day was back on the road with a destination of Lebanon, TN.  We were staying in a state park there, Cedars of Lebanon.  No phone, no wifi, no TV.  It was a pretty park though.  And I am glad Sarah made reservations because the government was shut down.  That meant that all the national parks were closed and the campers who would be staying there flooded into the state parks.  Sarah made reservations a week or so before, so we had a spot.  The initial spot we chose was too tight of a fit, but they were able to shift us before the crowd arrived. 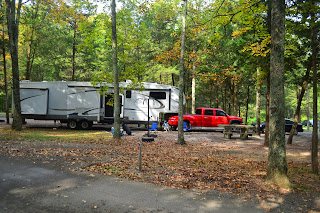 Before long, we had a visitor. Our friend Ken lives in Nashville.  Sarah has known him since high school and I met him when I met Sarah.  He is a great guy we don't get to see often enough and we spent the night laughing.

The next morning presented a challenge or two that we hadn't really expected and I almost made a colossal, unforgivable, idiotic mega mistake.  Luckily and innocent bystander was there to prevent catastrophe.


Posted by Adventure Nickel Farm at 4:27 PM No comments: