When we arrived in Aberdeen, not too long ago, it was as though the place was begging us to love it.  Heck, we woke up our first morning there and were greeted by river otters and bald eagles.

Bellingham has been a bit more coy about its affections.  We arrived in rain and have dealt with rain almost every day here.  We have been here almost a week and I still don't think we have had a good view of Mt. Baker.  Aberdeen was throwing itself at us.  Bellingham has just been flirting.

Don't get me wrong, Bellingham is pretty stinking cool, but there are a few things.  First, you know what you call people from Bellingham?  Bellinghamsters.

We have to pass it every time we want to go into town.  Scary.

We have found our bearings around town a bit and even ventured into some nearby towns.  With the weather not cooperating, we haven't ventured out too far though.  We decided, weather be damned, we were heading out toward the mountains today and that was it.

So, we woke up to another cloudy and cool day.  We loaded up and headed out to the Mt. Baker Scenic Highway.  It didn't take long for us to find our first diversion.  The highway parallels the Nooksack River.  When we saw the sign for Nooksack Falls, we had to stop. 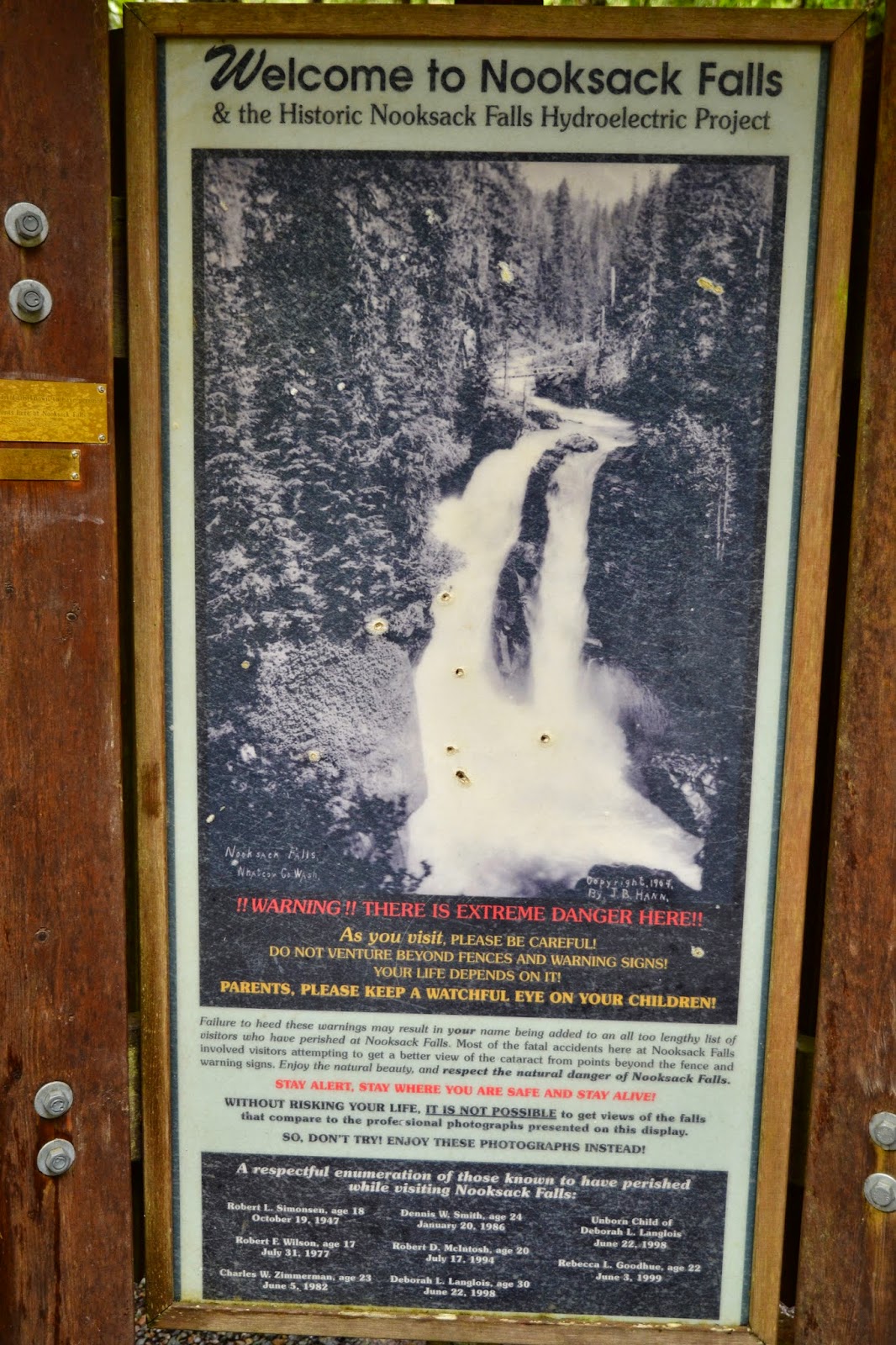 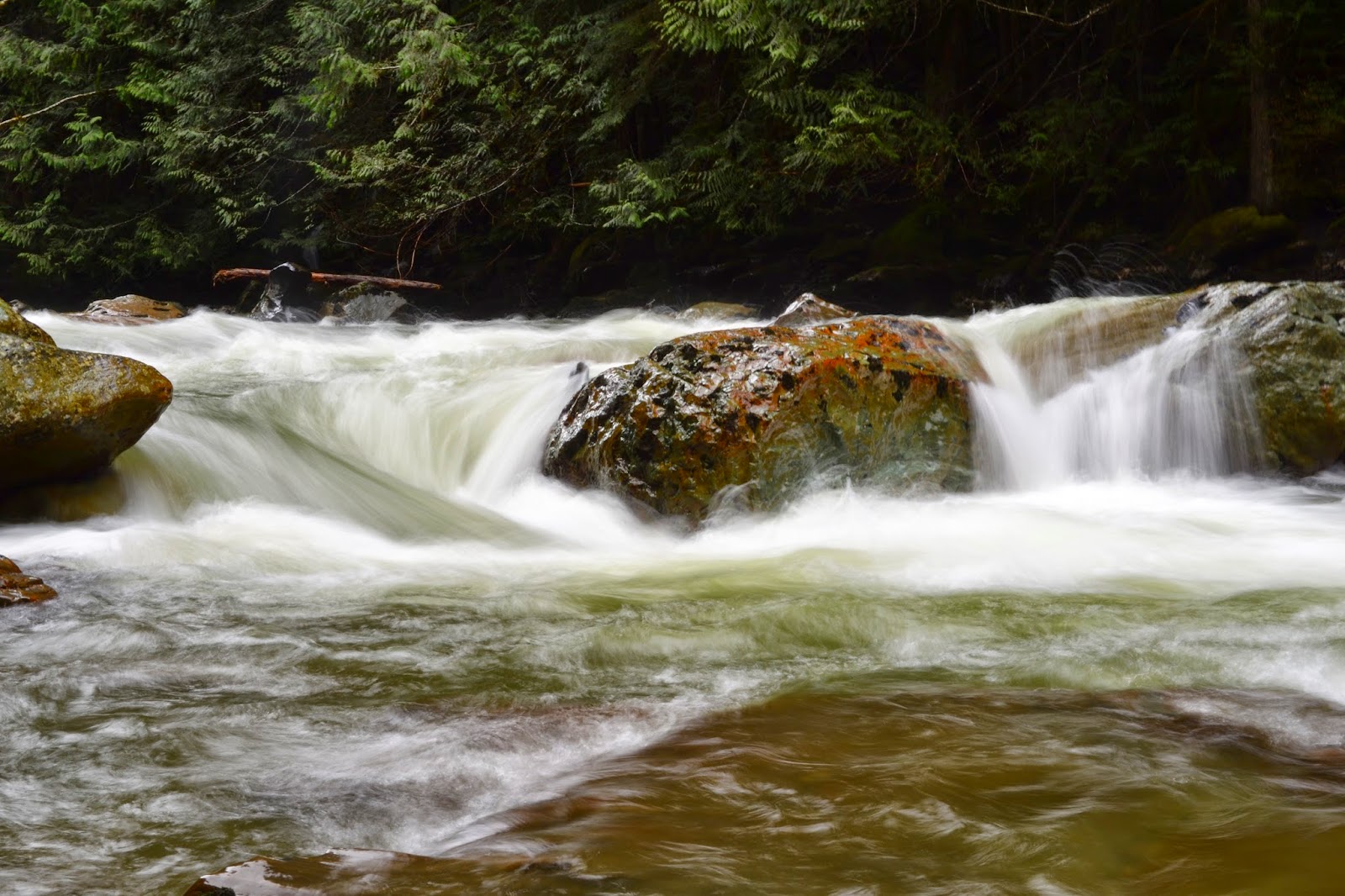 But, we weren't here just for pretty waterfalls.  We came here for more than that.  We wanted electric green spring forests.

The road was too narrow to stop at the really cool mossy groves of trees, but as soon as the shoulders widened up, Hondo disgorged a photographer for some pictures. 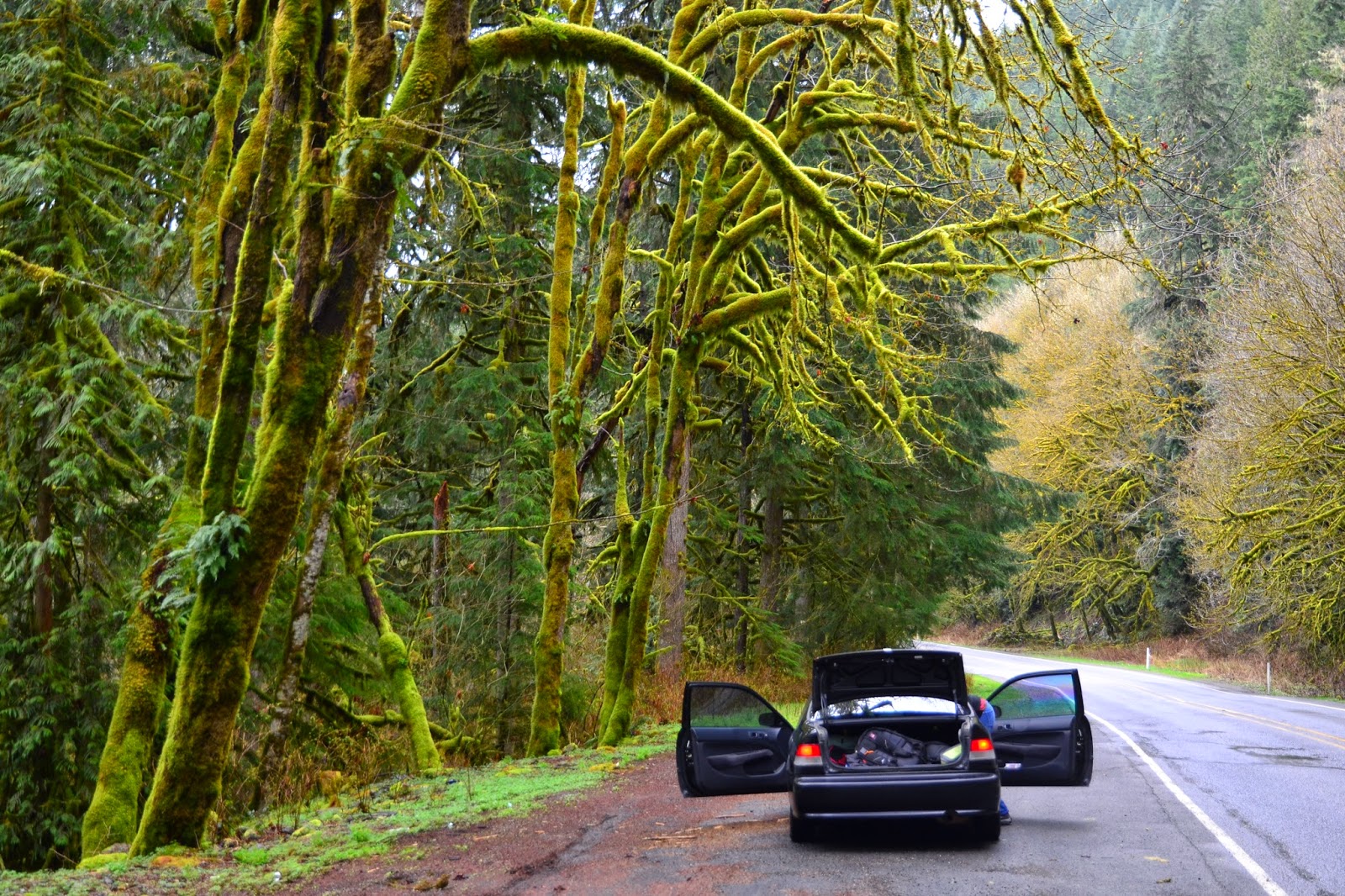 Oh yeah, we also wanted some snow and some mountains. 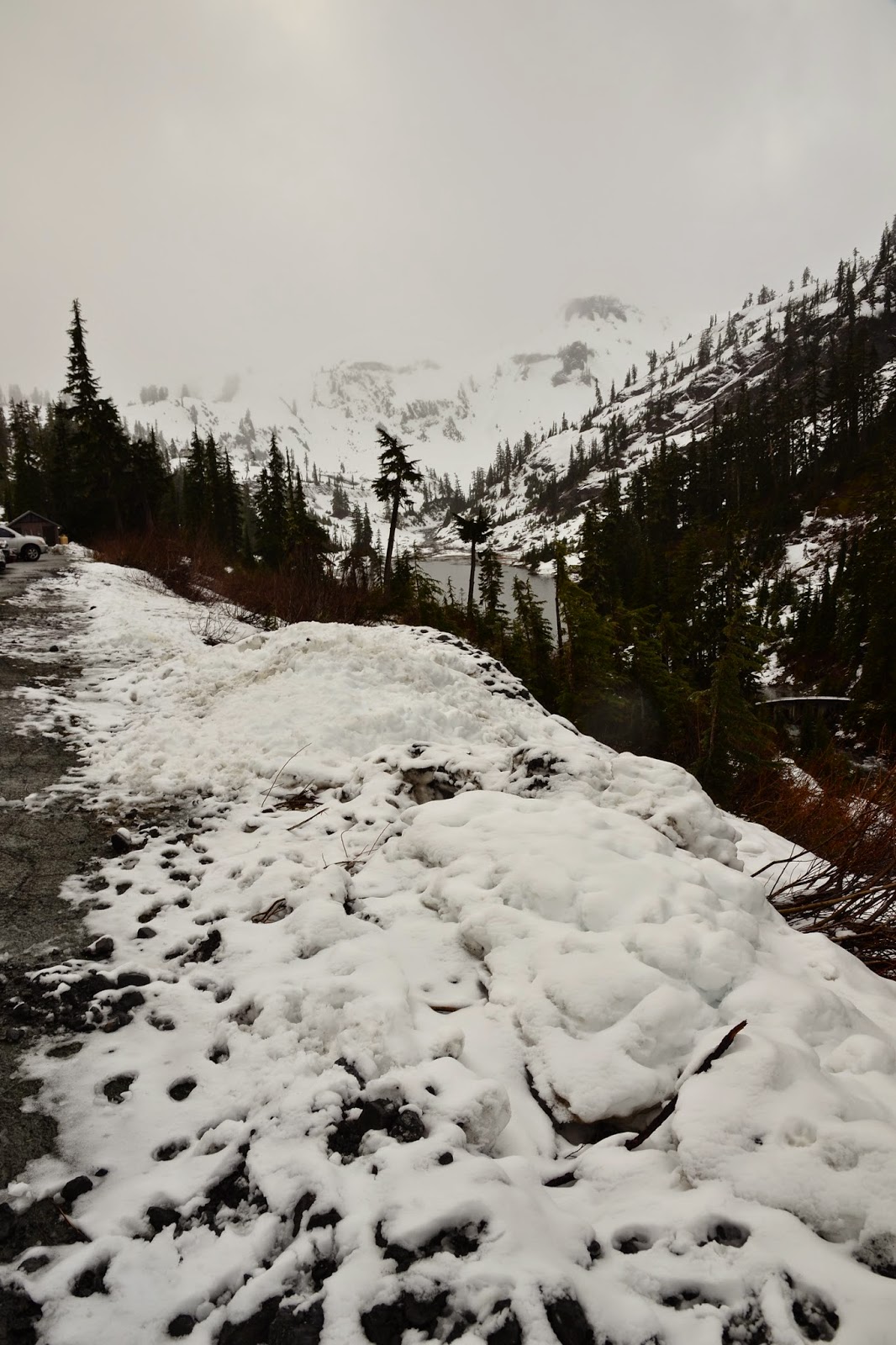 We initially were going to drive all the way to the end of the road at Artist's Point, but alas, it was not to be.  The road was closed.


So, we spent some time playing in the snow near the Heather Meadow basin ski area. 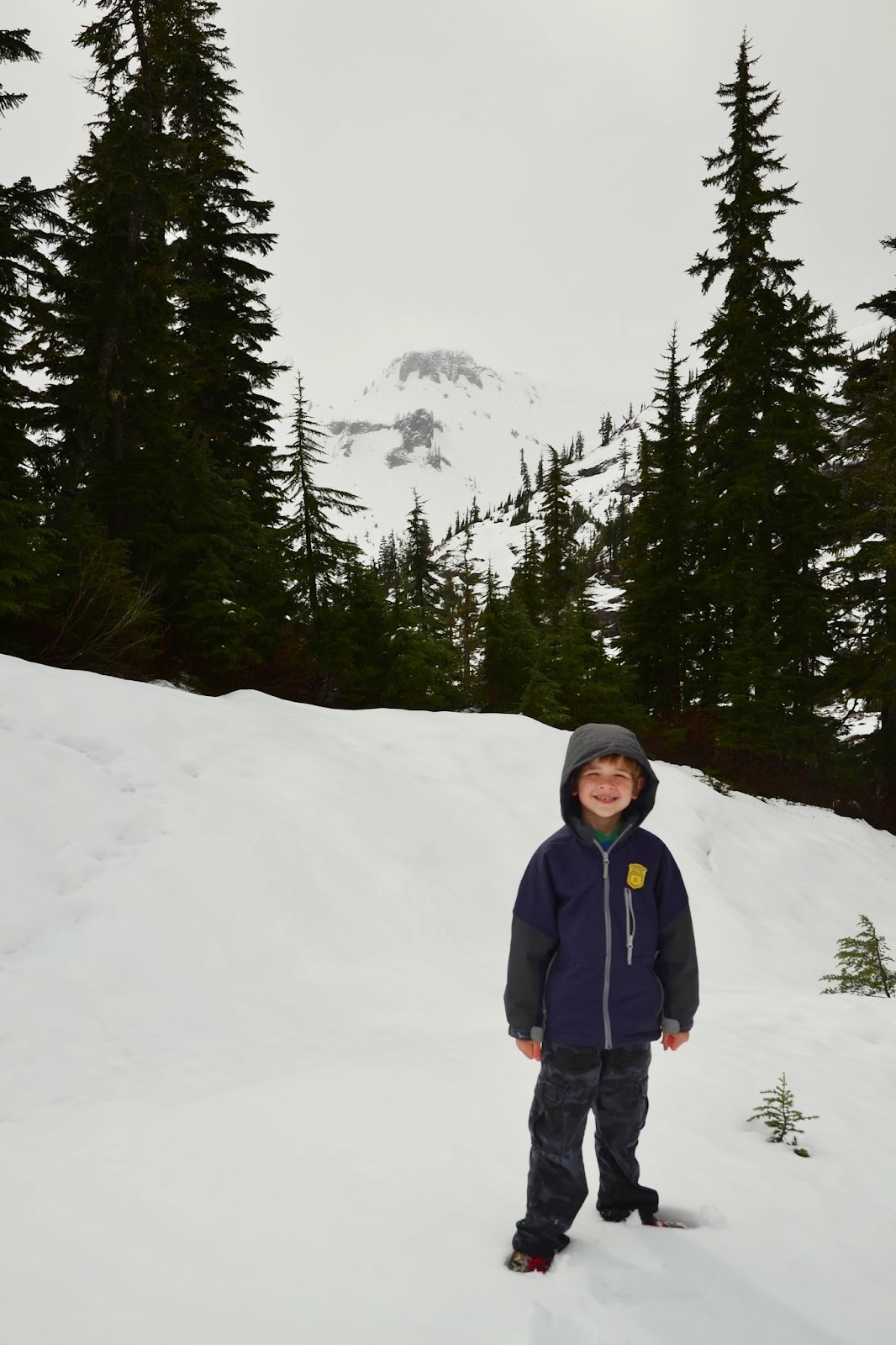 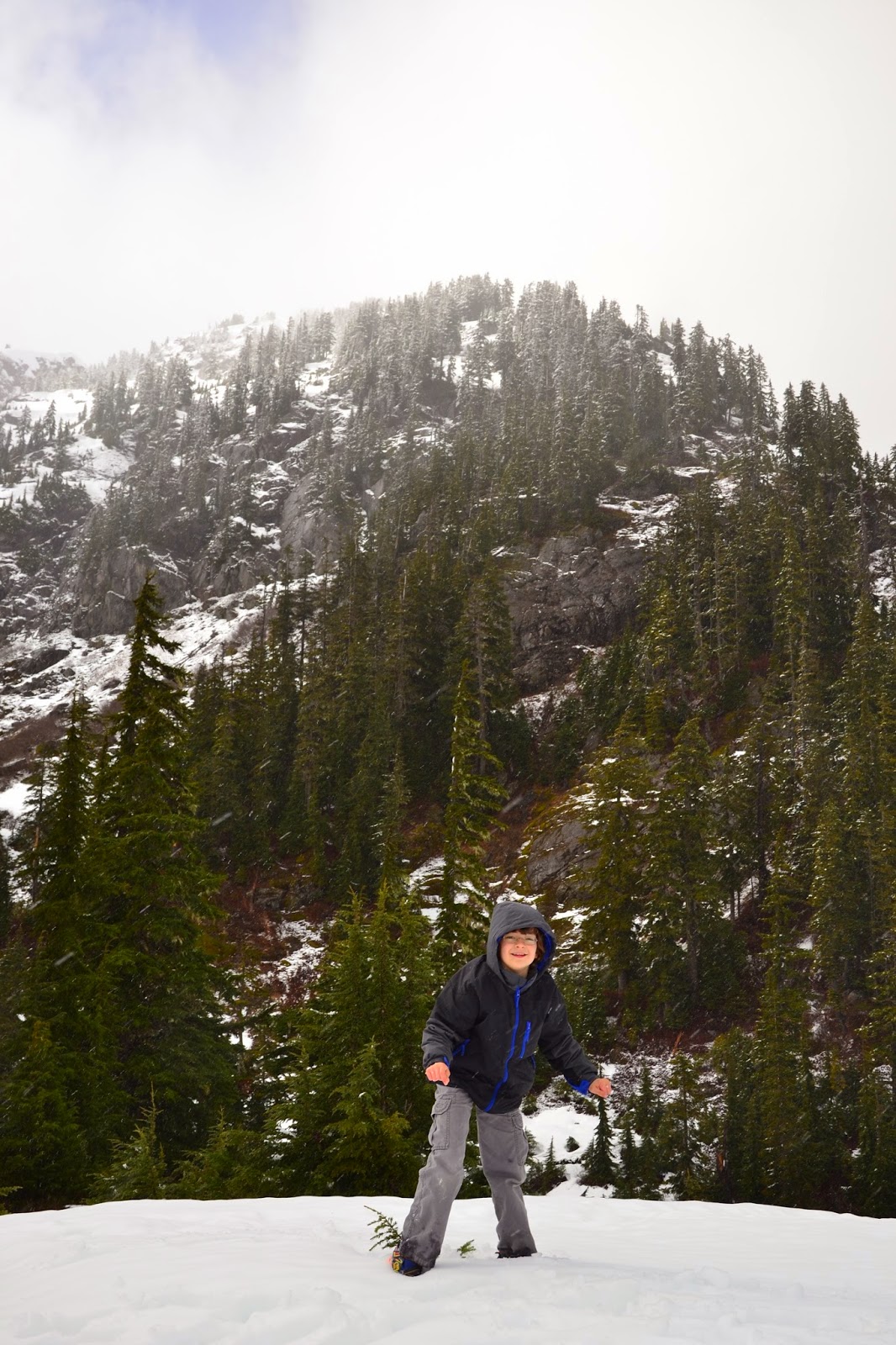 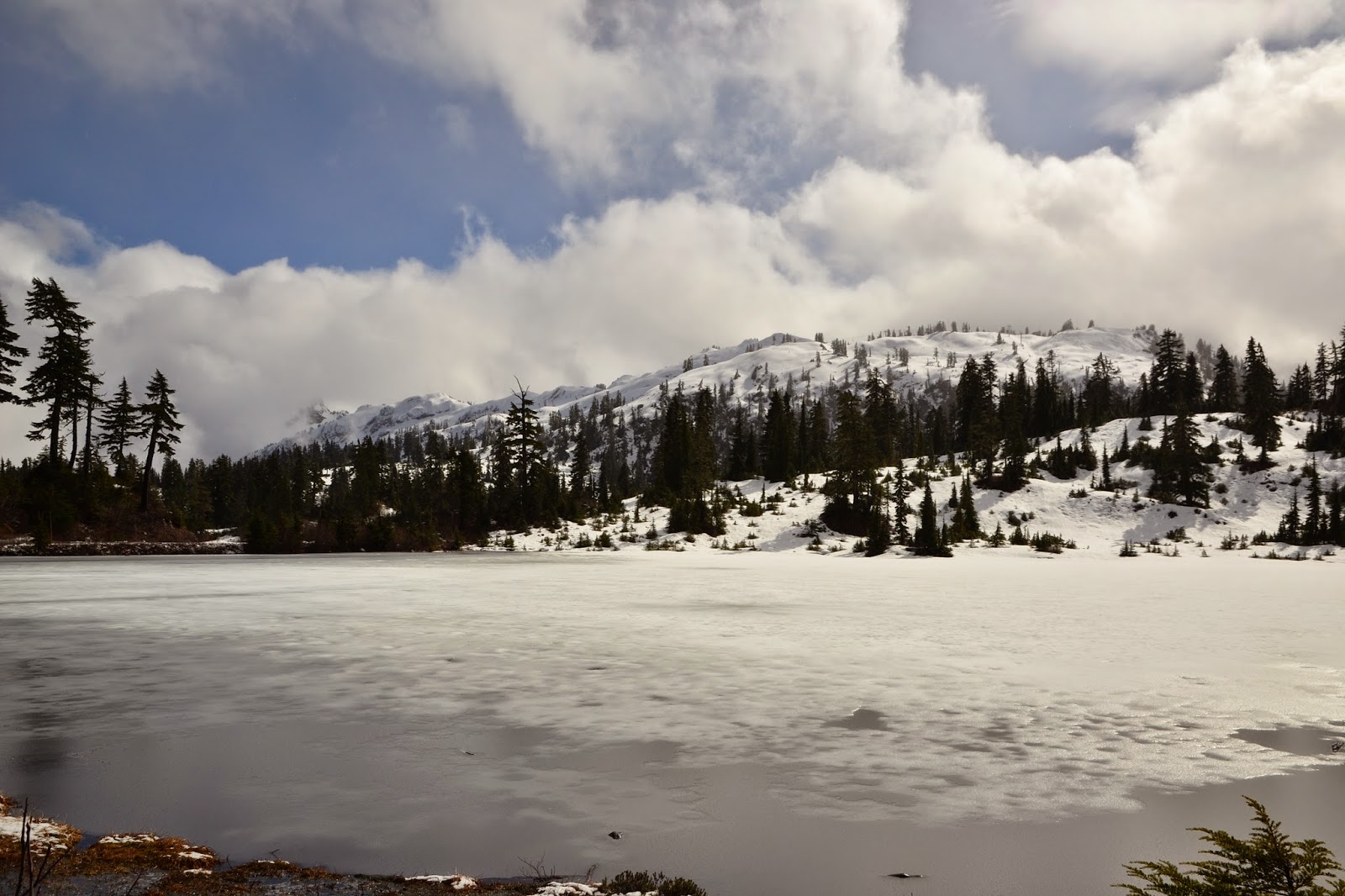 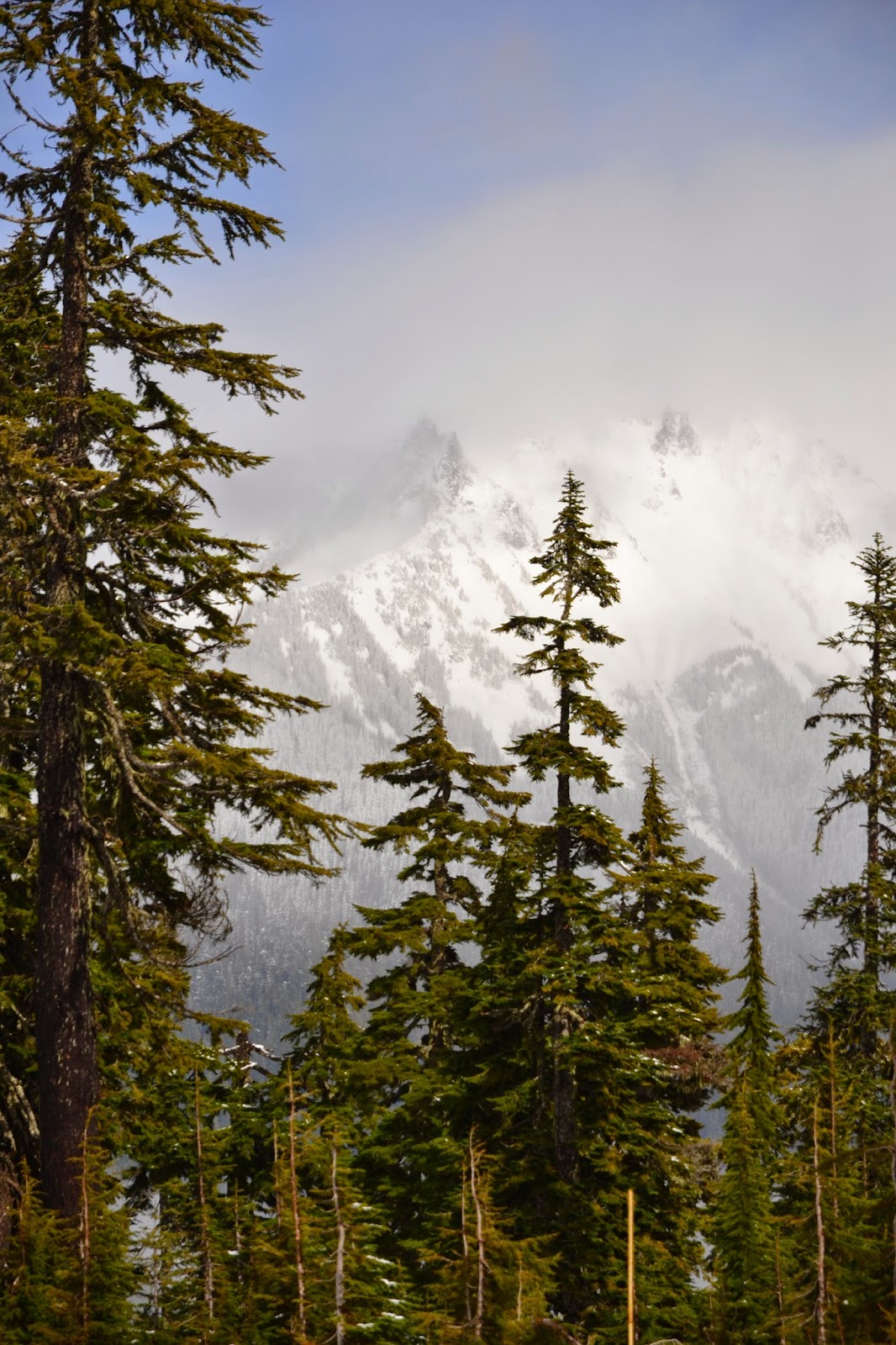 We couldn't stay forever though.  We had a good time mucking about the snow.  I got an opportunity to show Michael and Max a tree well and explain how dangerous they can be when they learn to ski later on.  Max, of course, said he would rather learn to snowboard.

On the way out, we had to stop to see another roadside waterfall.  Yeah, I'm an addict. 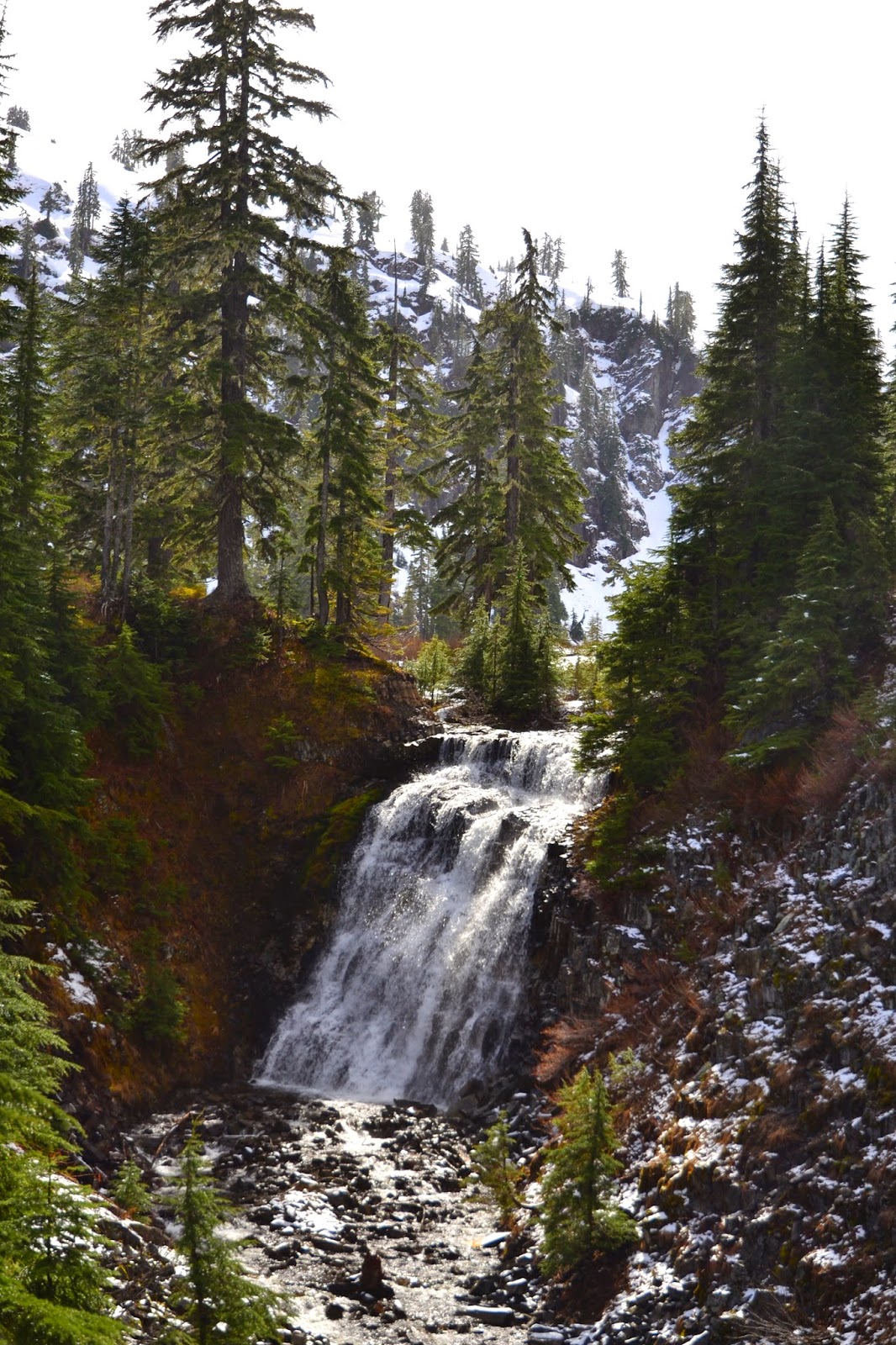 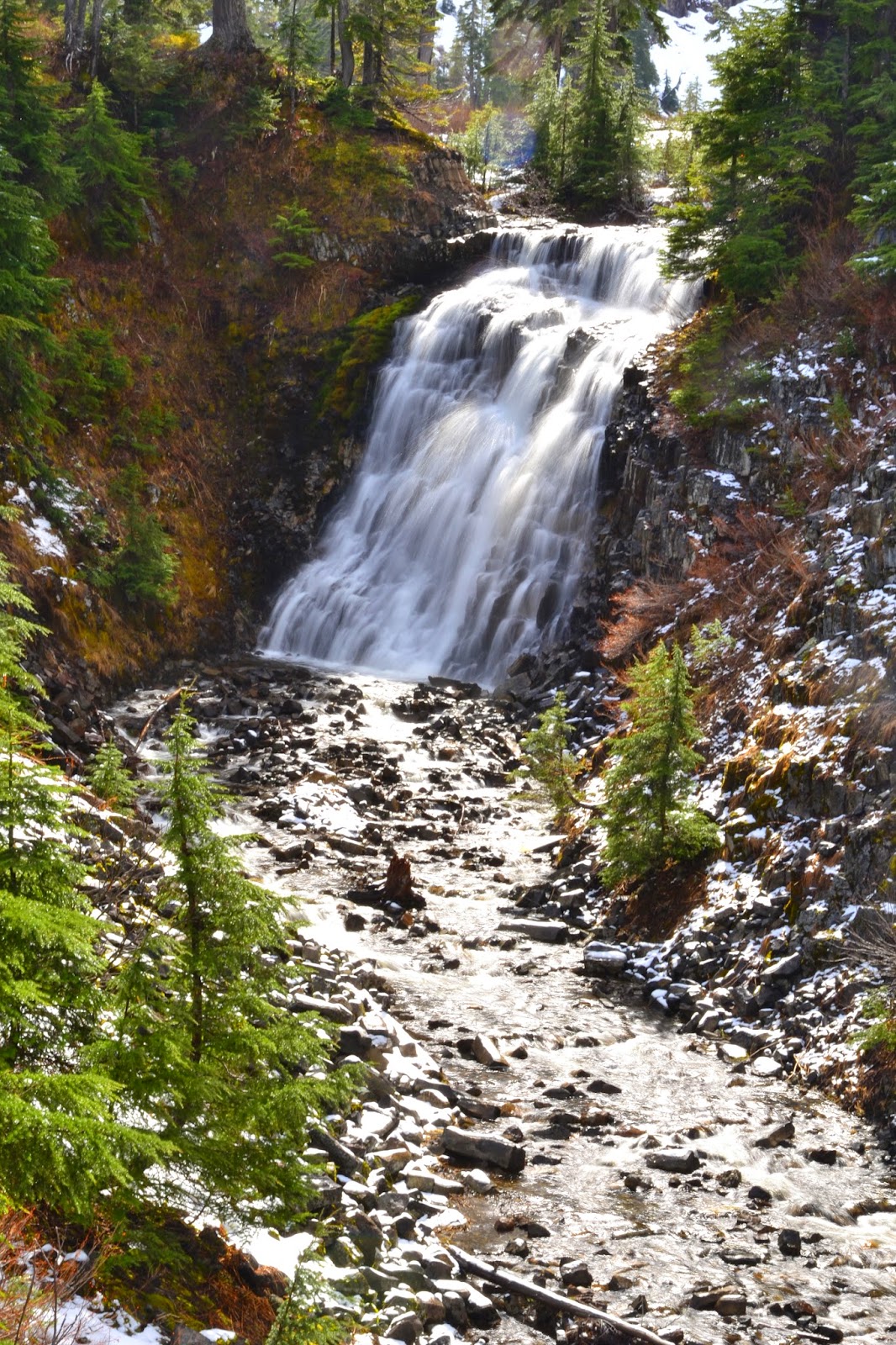 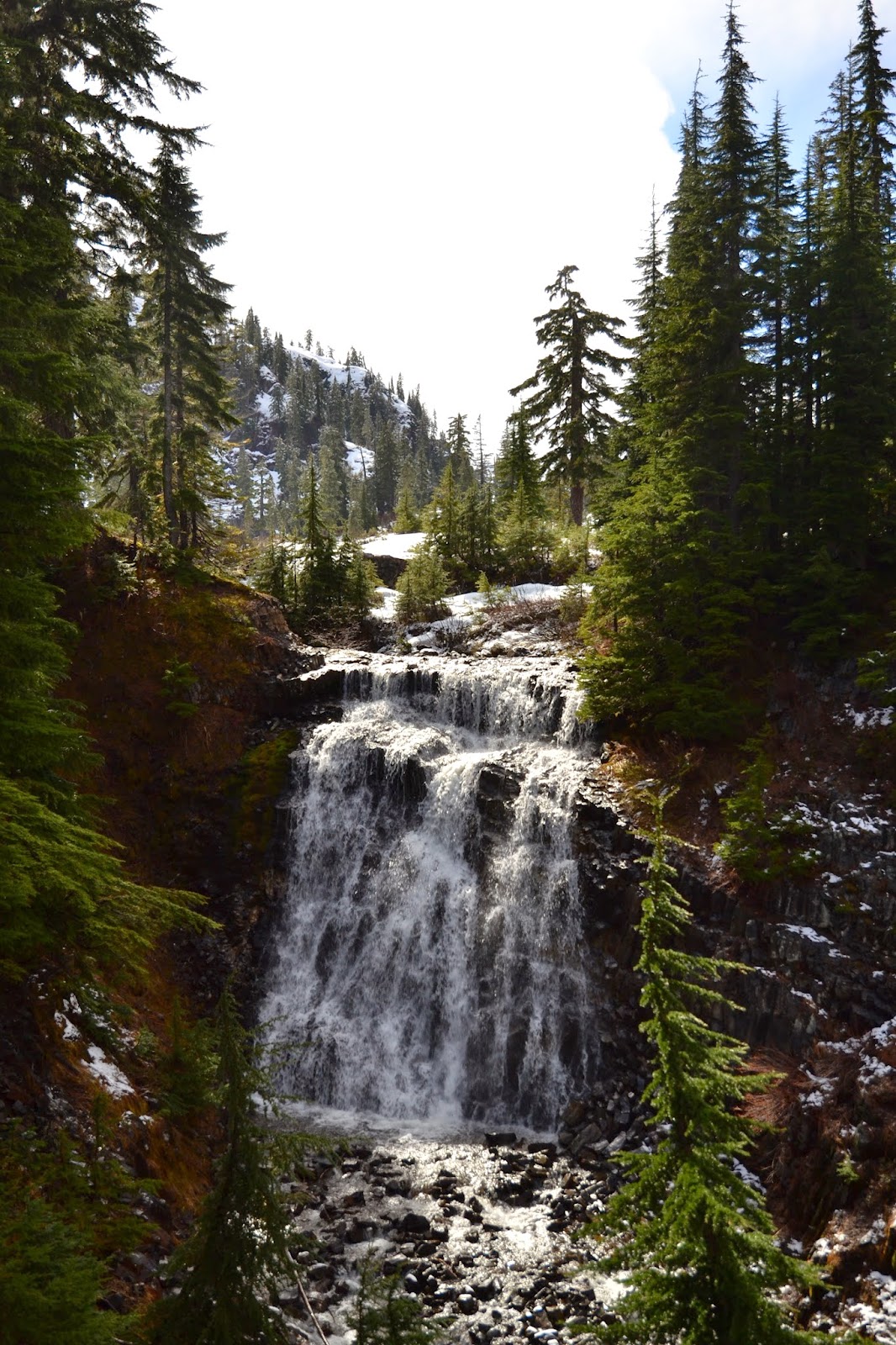 And that was that, as far as adventures were concerned.  We drove down the mountain and back into Bellingham for some serious good burgers and then a short exploration of downtown.  There is a gaming place Michael and Max loved and flyers posted for all sorts of cool activities. This place has a lot going for it.  And, if you stick with it, this area will reveal its charms.  On the way down the mountain, we may have gotten this area's version of bald eagles and river otters. 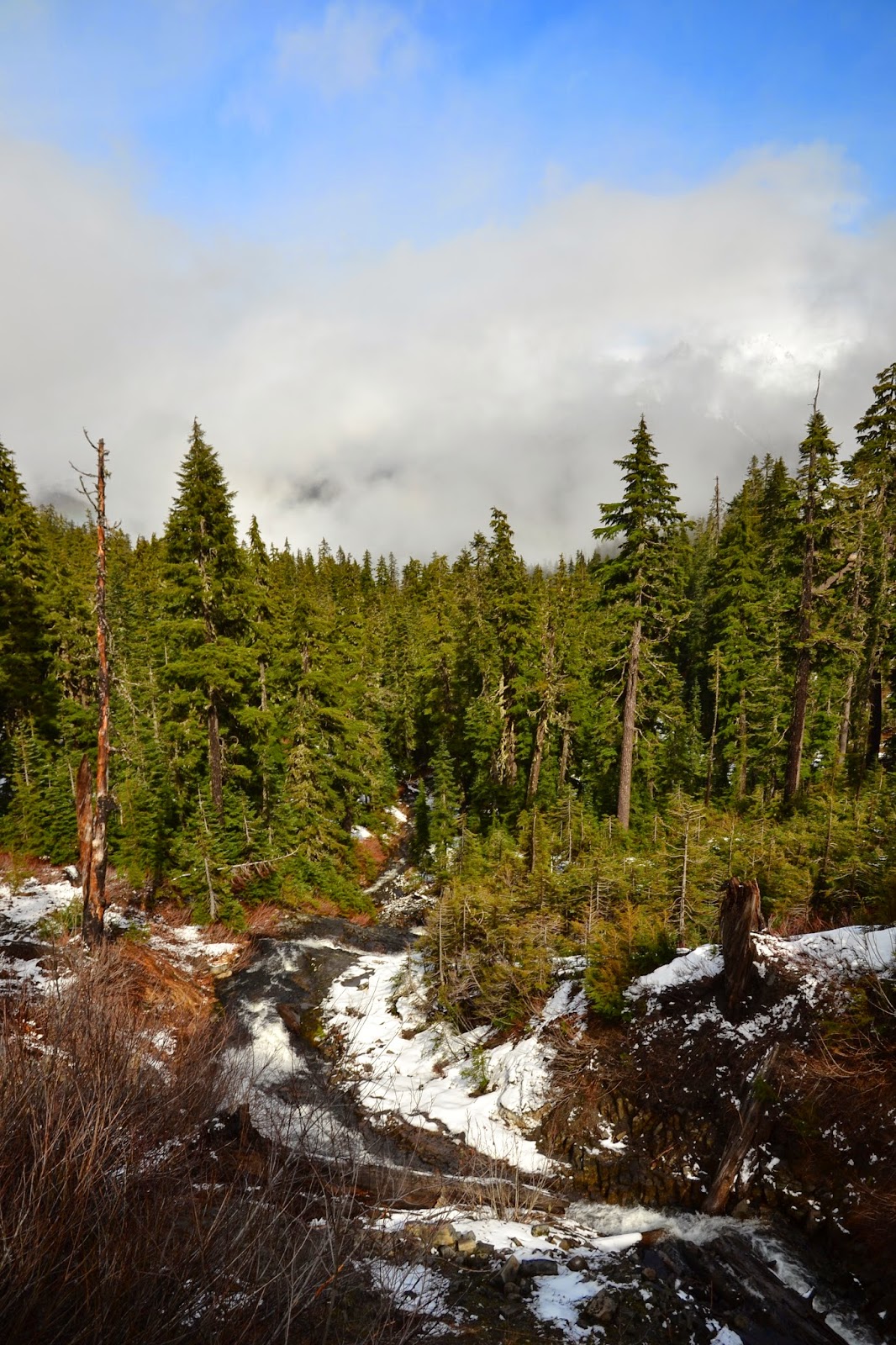 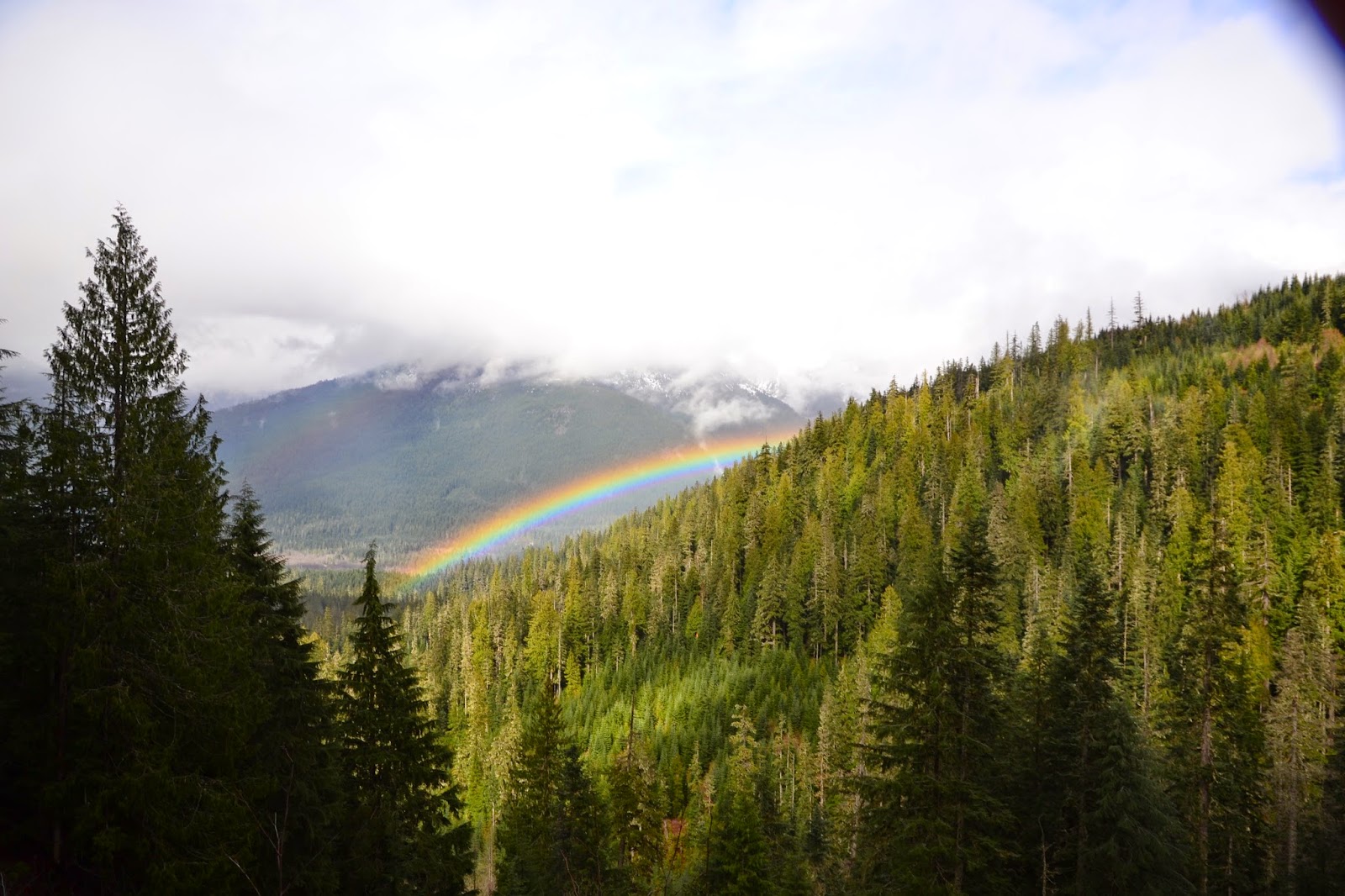 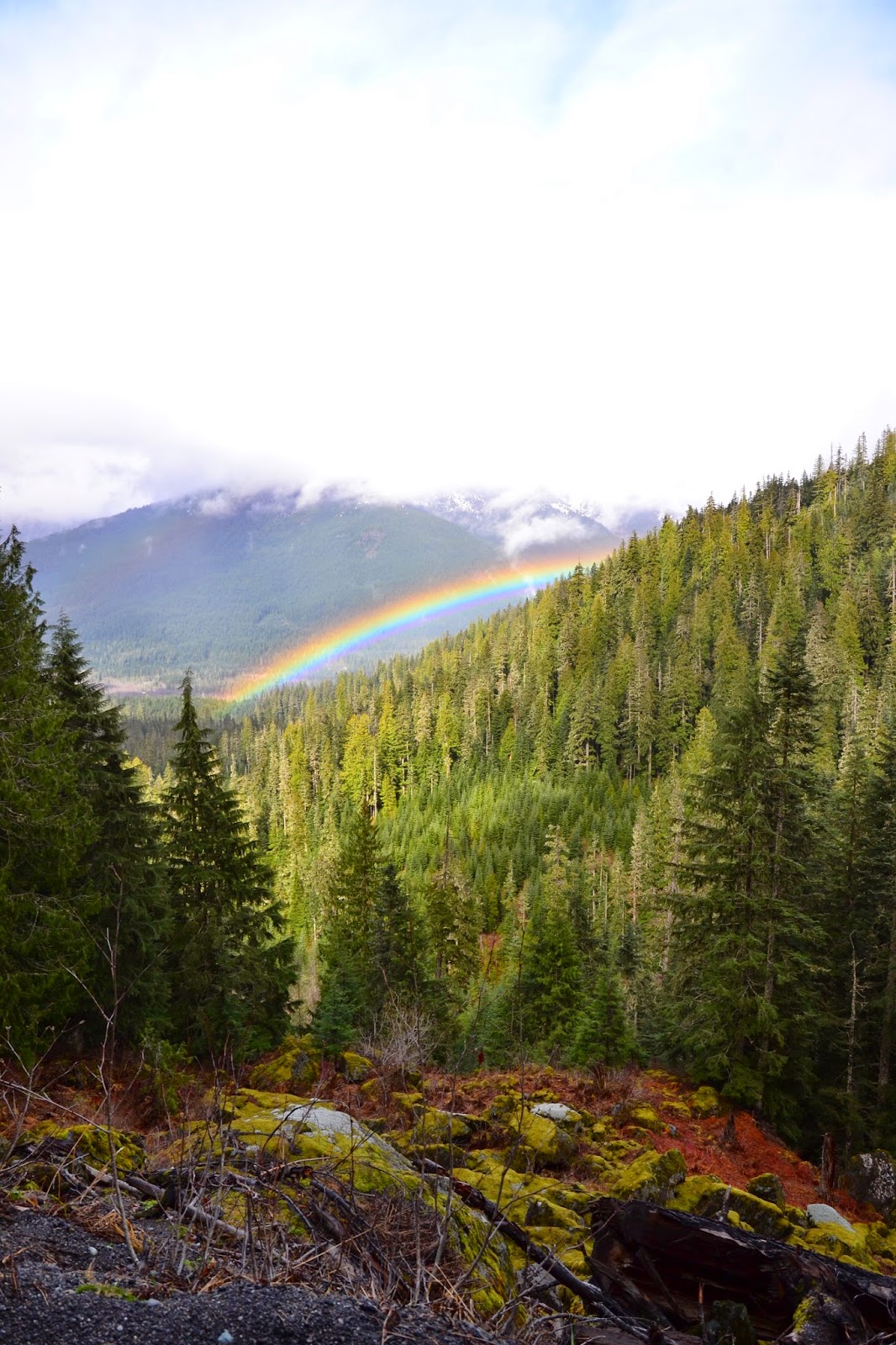 Posted by Adventure Nickel Farm at 10:51 PM No comments:

Finishing up here in Aberdeen

Not a bad weekend.   Finished up my last day in prison and walked out a free man.  I didn't even have to crawl through a sewer system or anything.  We had the weekend with no real plans other than heading up to south Canada on Monday.  Sure, there are things we need to do to get ready, but it really hasn't been that long since we last traveled and we aren't going very far.  So we decided to do a couple more things before we left.

Ocean Shores was having a razor clam festival.  Sounds good, we're in.

We aren't big clam-ivores and don't know the first thing about how to hunt or gather or catch them, whatever you are supposed to do.  We do know what to do on a beach though.


Sarah searched out someone who looked like they knew what they were doing and asked them about digging for clams.  Turns out you look for indentations and air hole looking things in the sand and then dig down and get the clam. You can use a shovel or one of these special made clam digging tubes that you drive into the sand.  It pulls up a core that contains the clam if you aimed it right.


We didn't know exactly where the festival part was being held, but we're at the beach.  Let's frolic! 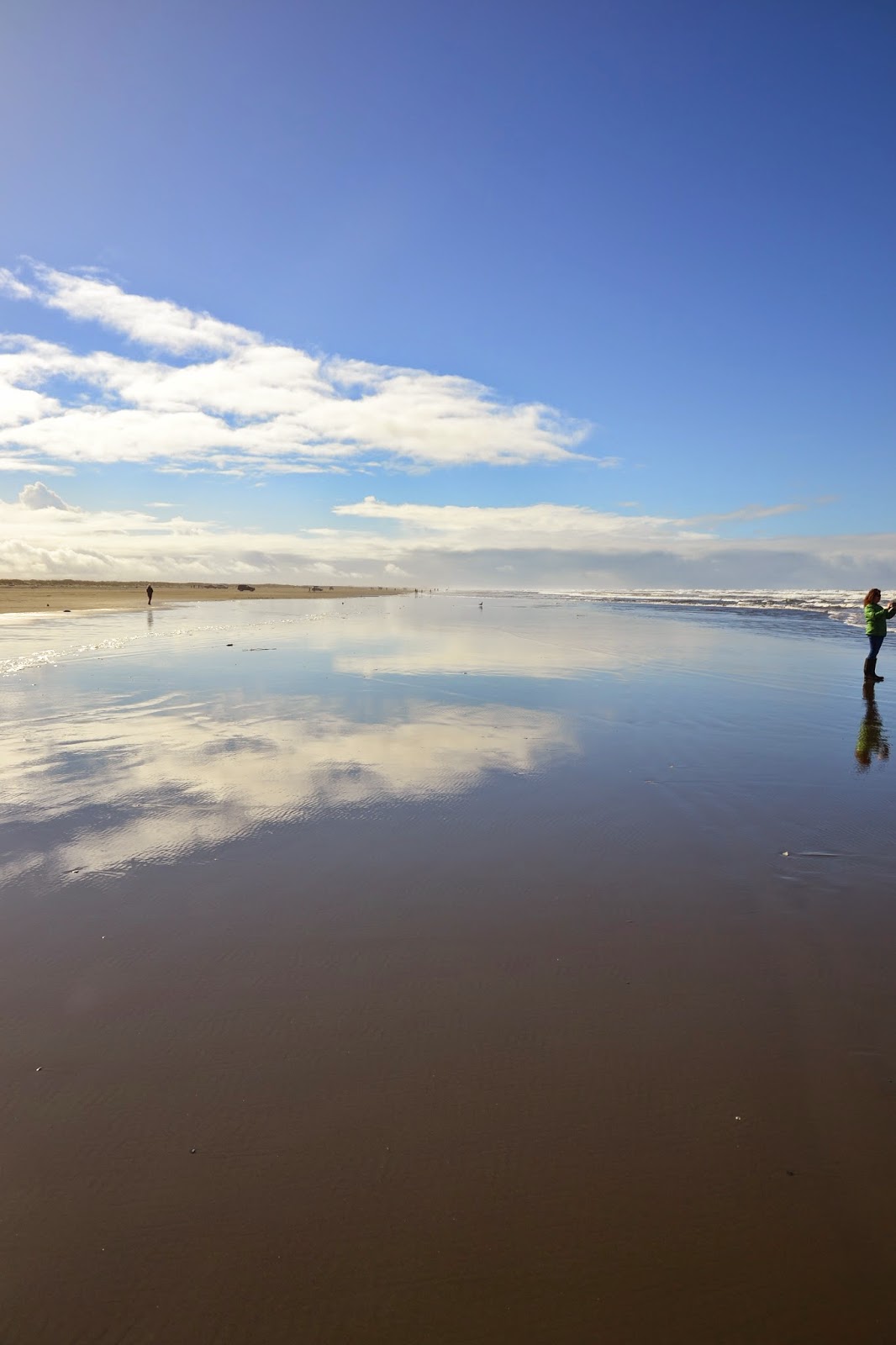 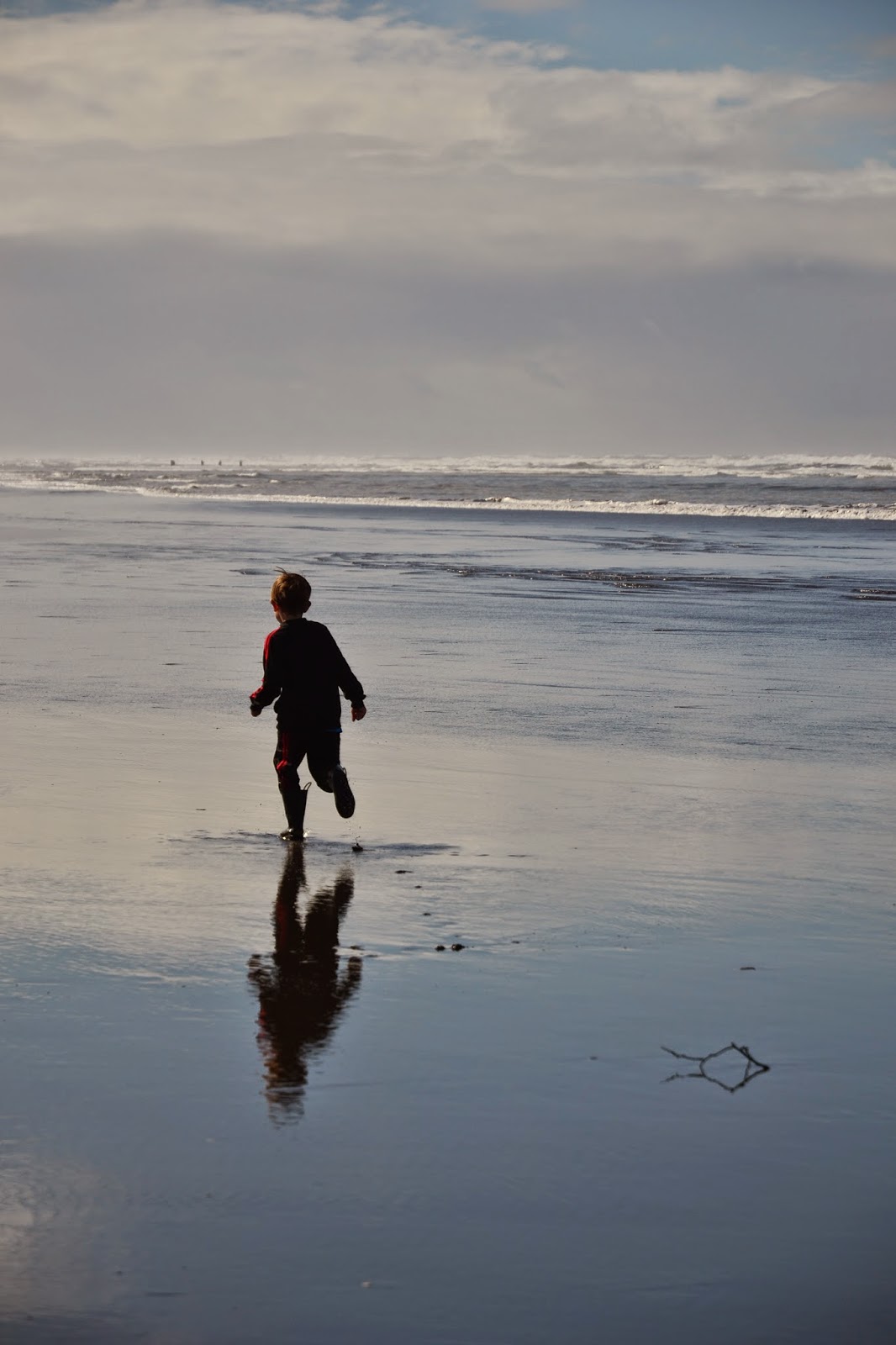 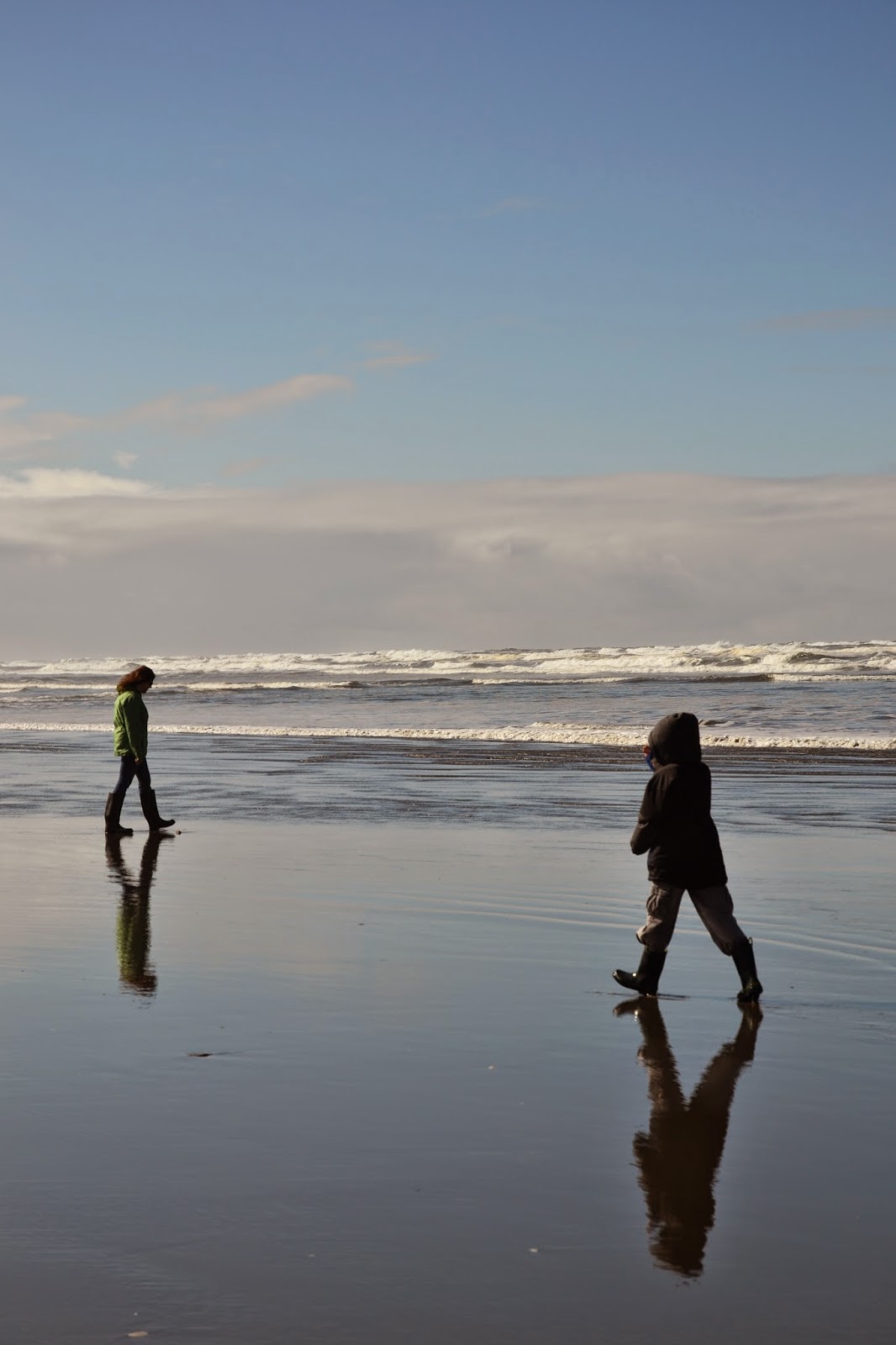 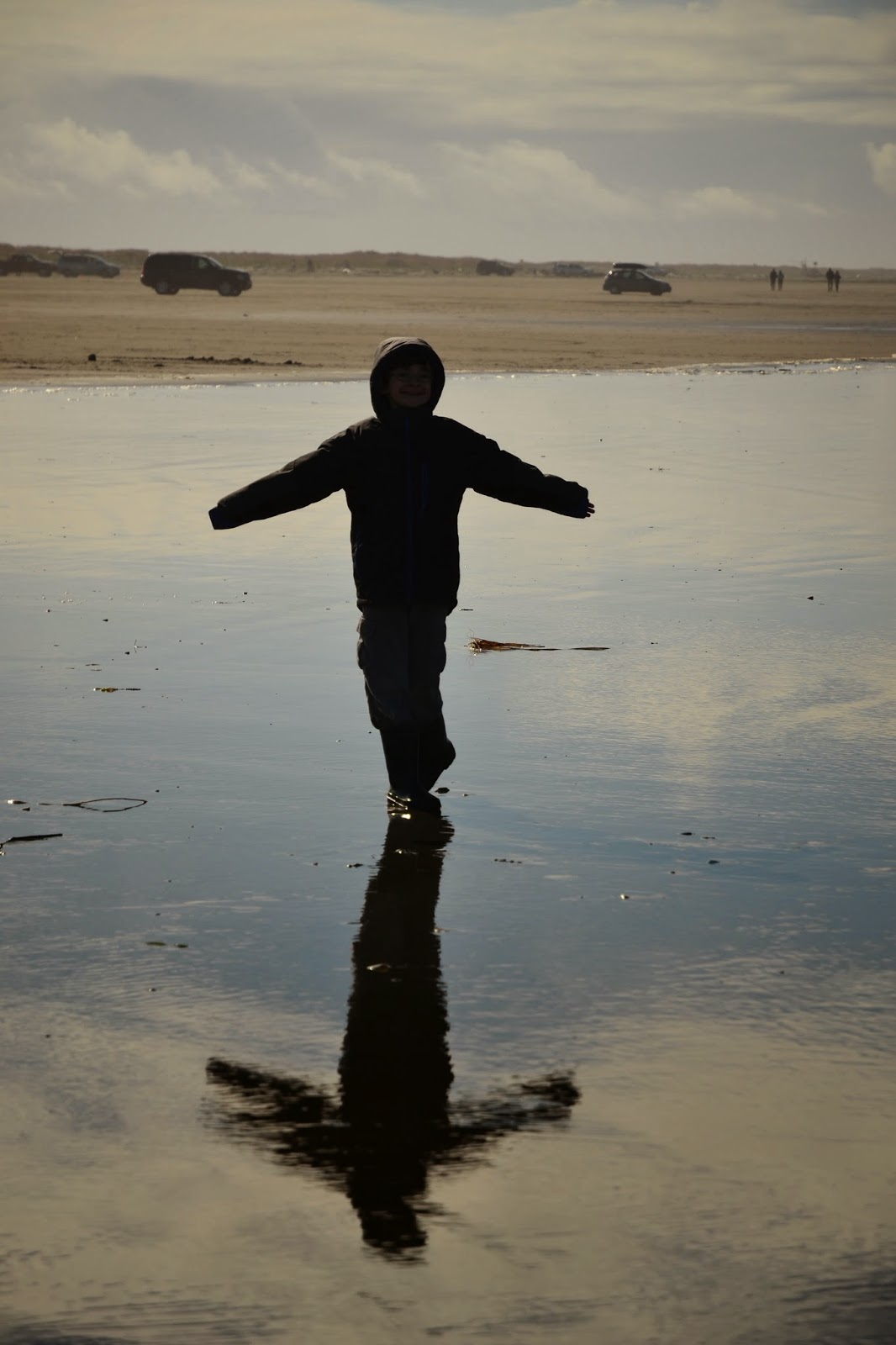 Of course, when you mix young boys and ocean surf, there is bound to be some mess.

Gravity gets us all eventually.


It turns out that soaking wet and sandy isn't as much fun as it sounds.  That didn't stop us from heading out to the breakwater and letting the kids traipse about the rocks though.  We were just done frolicking for the day.

Then we went home.  And on to the next day.  Our plan was to go to the Hoh rainforest. There is a problem though, I think we already explained it.  It's two hours away and there are tons of distractions along the way.  Not only that, but it seems like the thing to do there is a 17 mile trail leading up to the shoulder of Mt. Olympus.  Sounds awesome, just not right now.  So we decided to head back up to Quinault.  It is a rainforest too and there are tons of trails.  Also, it is only 30 minutes away.

Yeah, let's do that.

We found a likely looking trail that was not too short and not too long.  It was a rainforest, so of course it was raining.


As we were walking along I spotted this place. 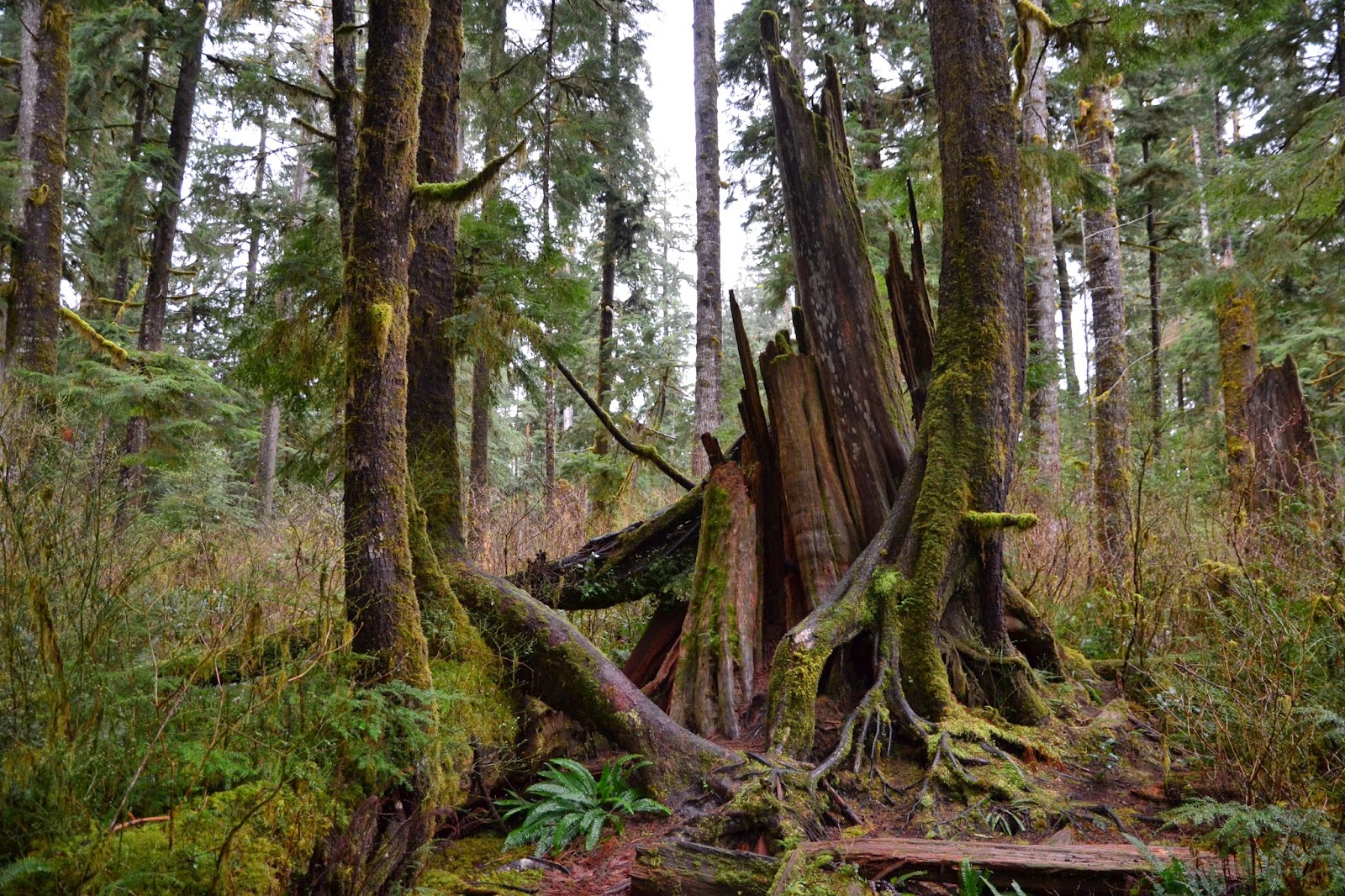 I love this scene.  It has everything.  It has life, death and rebirth.  It shows the function of the forest where everything is in balance.  Something lives, then dies and gives birth to more life.  That which isn't needed isn't used and falls to another.  Trees, fungus, moss, grass, homes for animals, all there.  It is an entire community all by itself.  You don't see the ego.  There is no insecurity here.  It is life and it is beautiful. 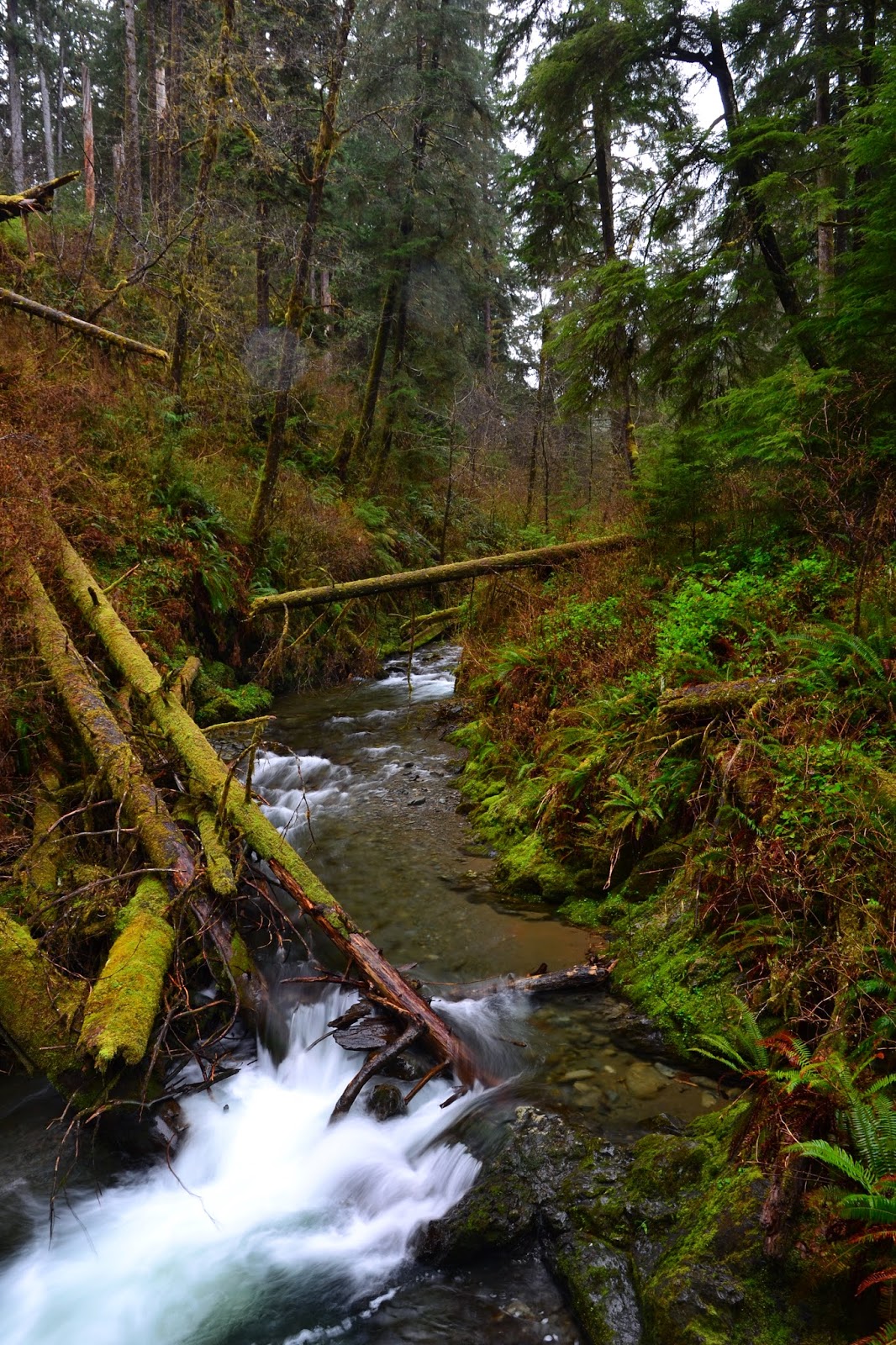 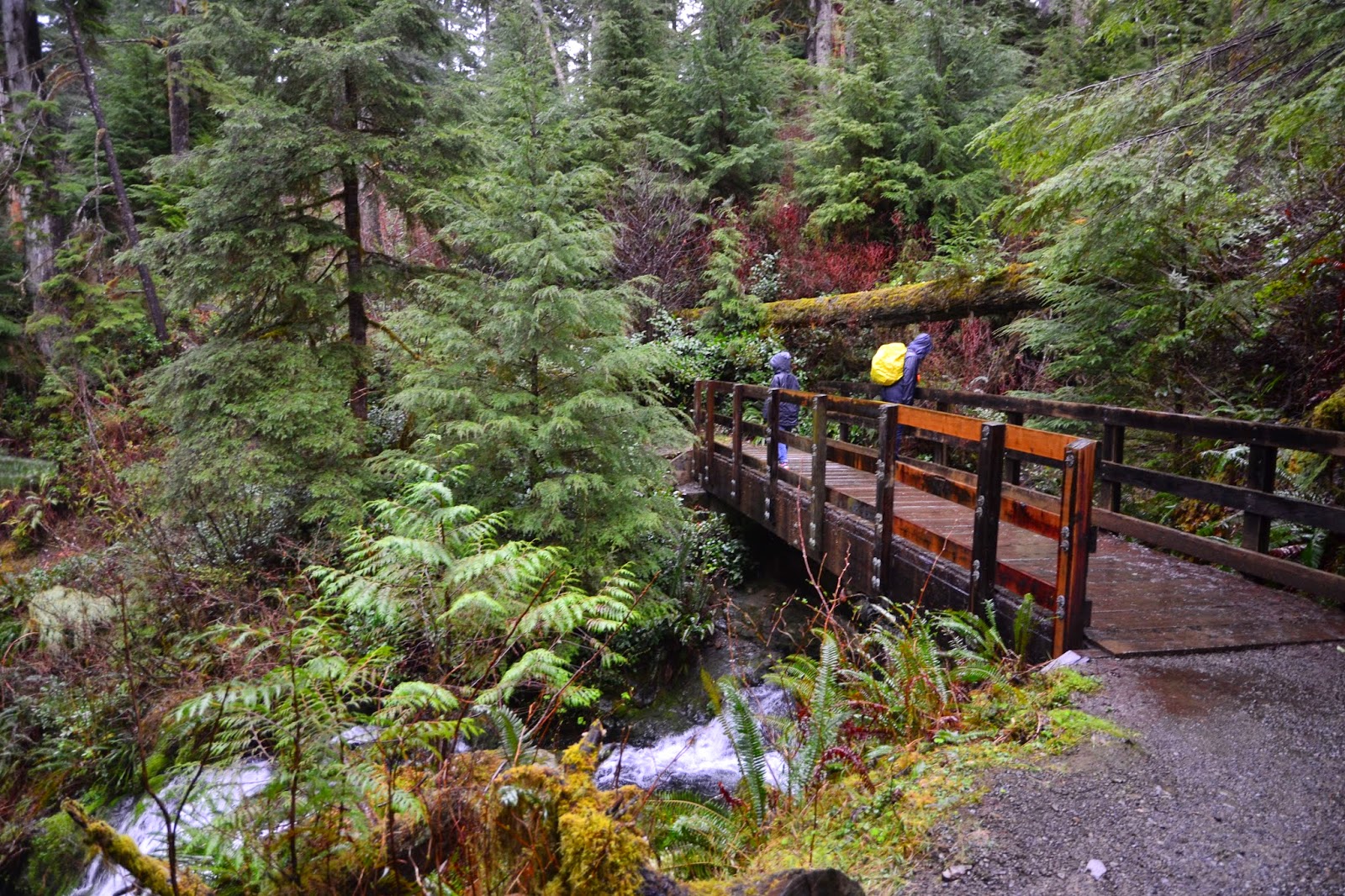 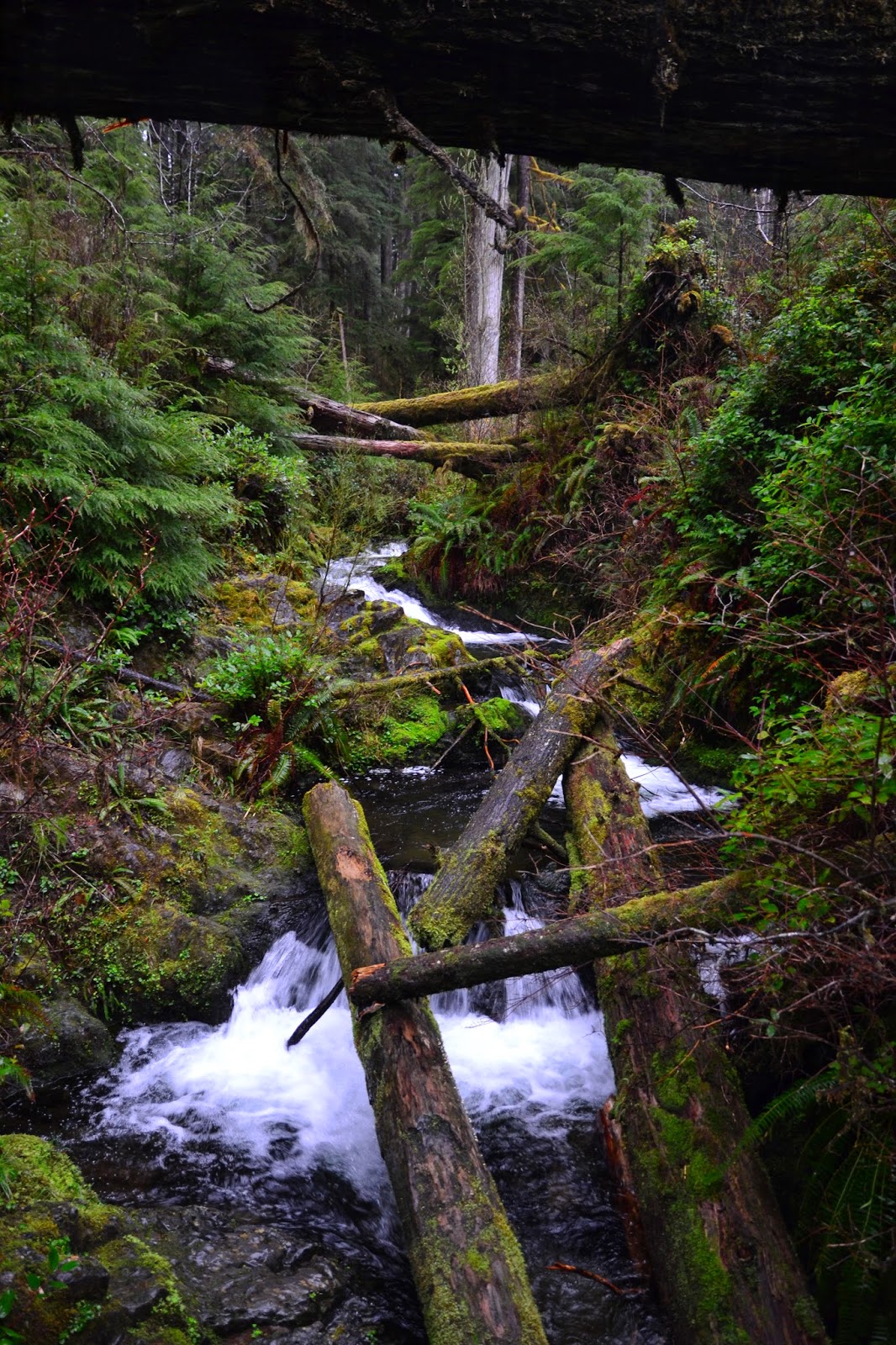 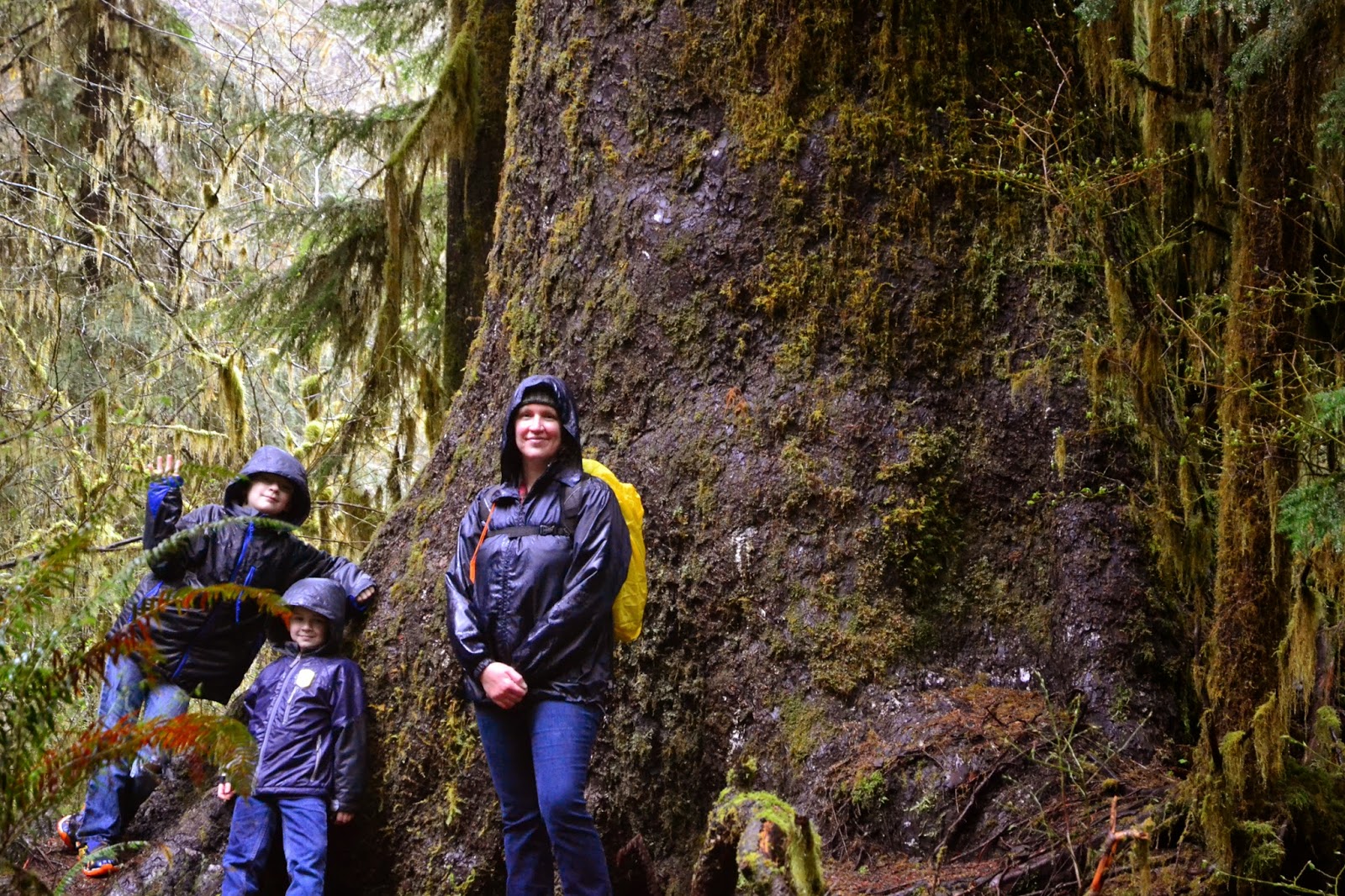 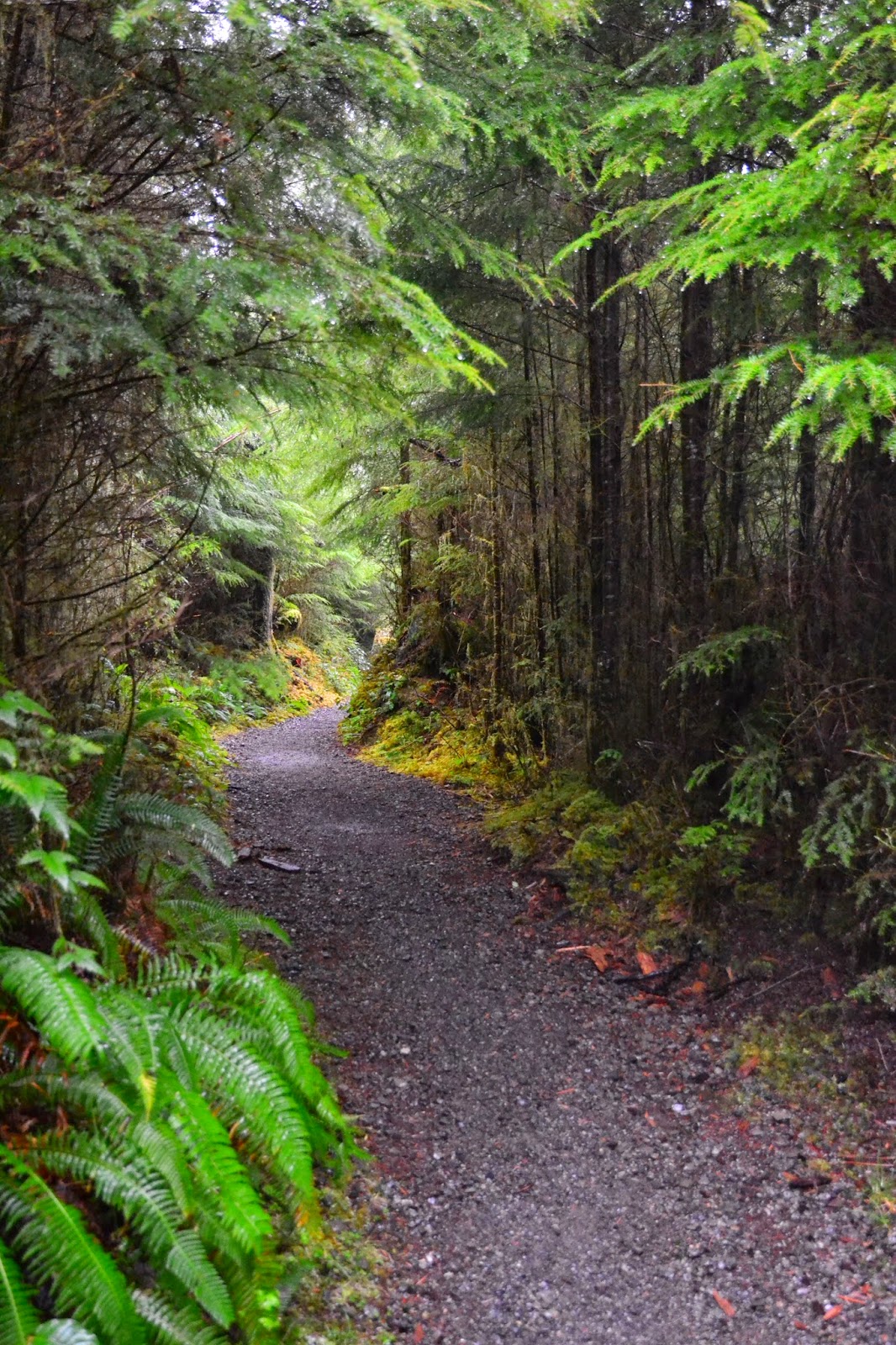 That trail was pretty cool.  But it didn't have enough big trees.  There was that one, of course, but I thought we could do better.  After all, Quinault is the "Valley of the Rainforest Giants"  I needed a tree so big it had its own sign.

And it was a short trail too, only about 0.2 miles.  Once we saw it though, I think we wanted it to be longer. 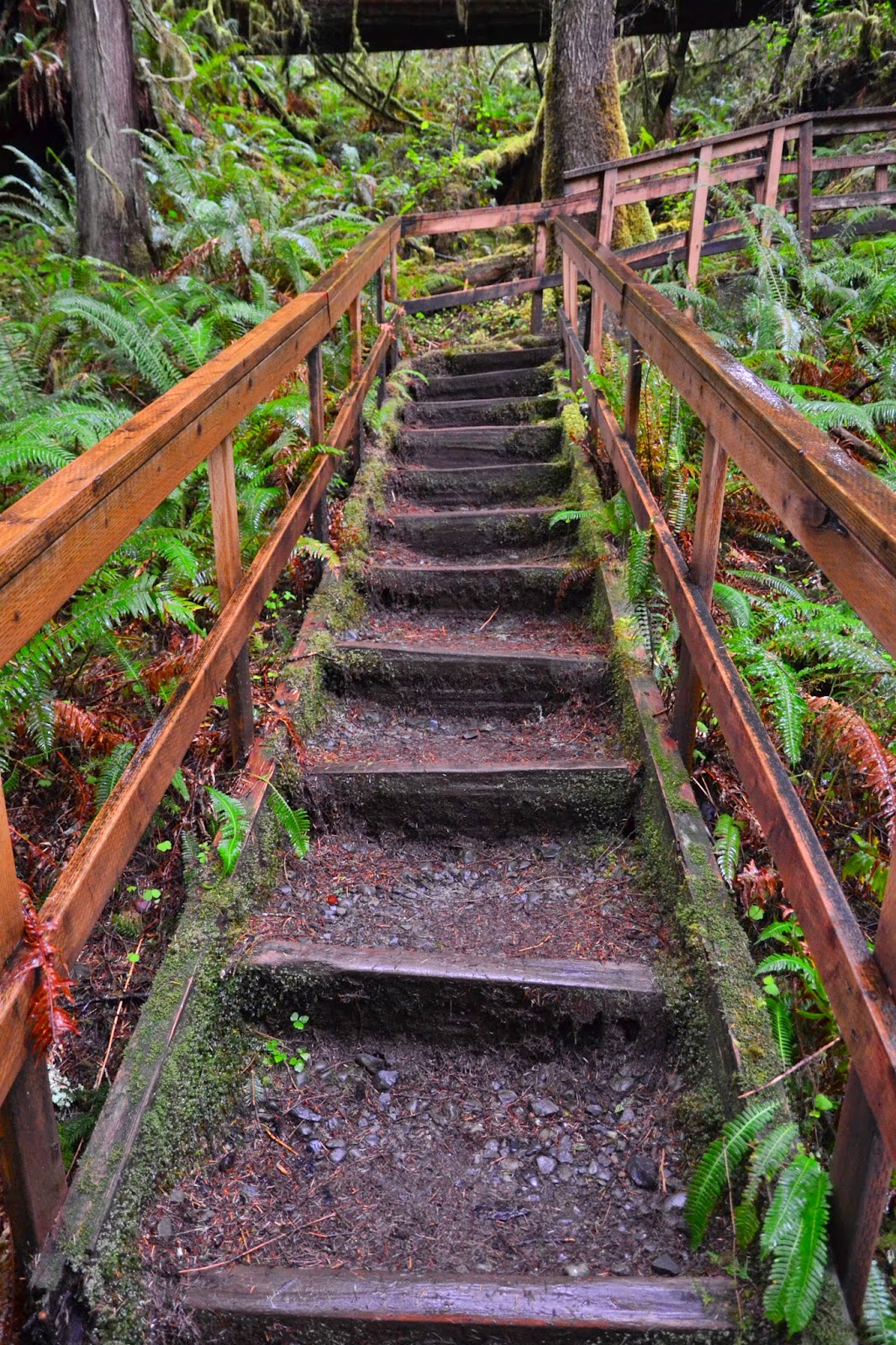 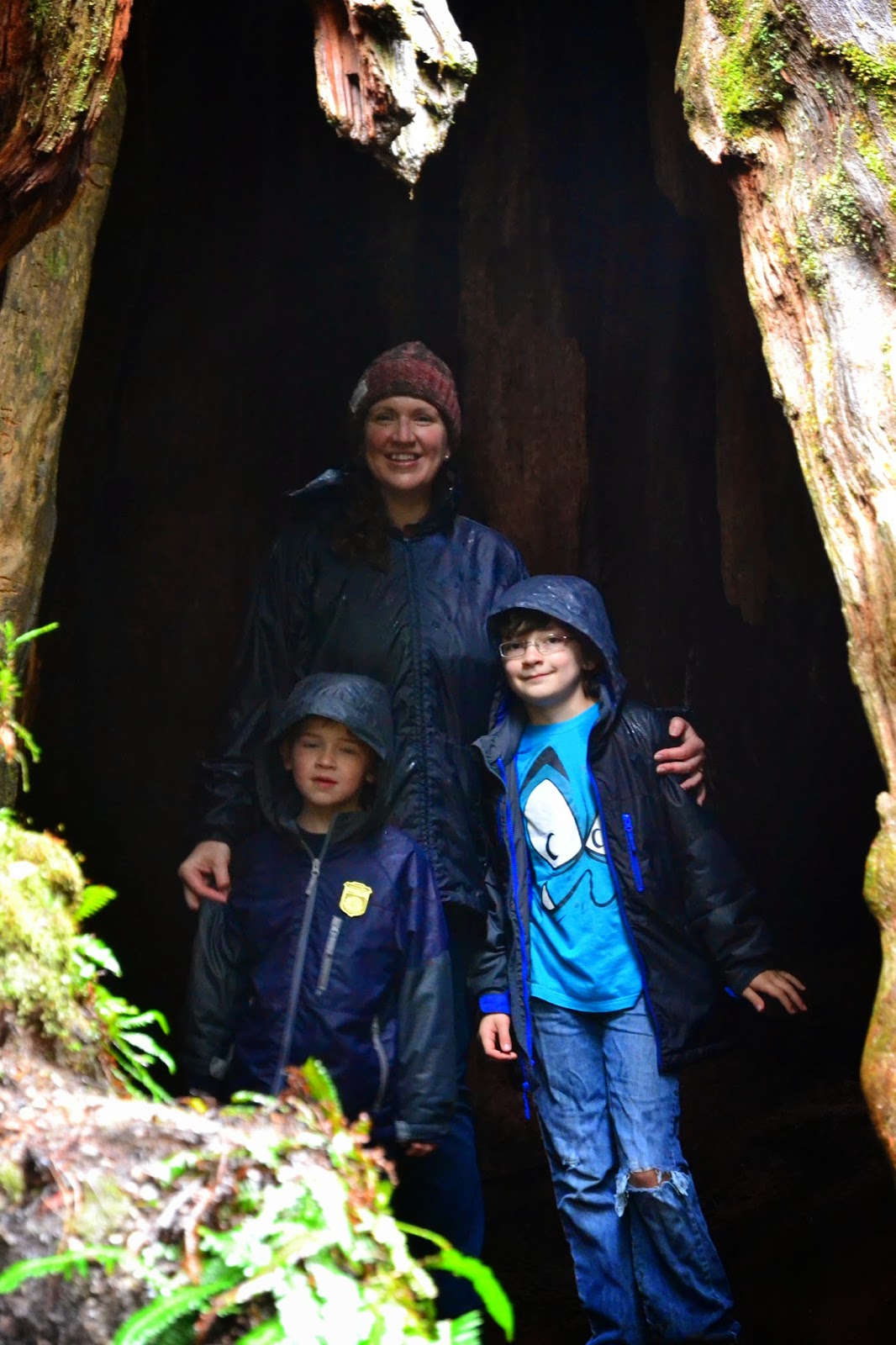 Finished with hiking for the day we drove home.  Along the way I stopped to snap a picture or two of the Lake Quinault area.  It is pretty stinkin' beautiful.  All in all, the west coast of the Olympic peninsula has a lot to offer, even from the little we got to see of it.  We have enjoyed our time here quite a bit.  I hope we return.  But, for now, we head to Bellingham tomorrow.  I hear it is like Tijuana for Canada! 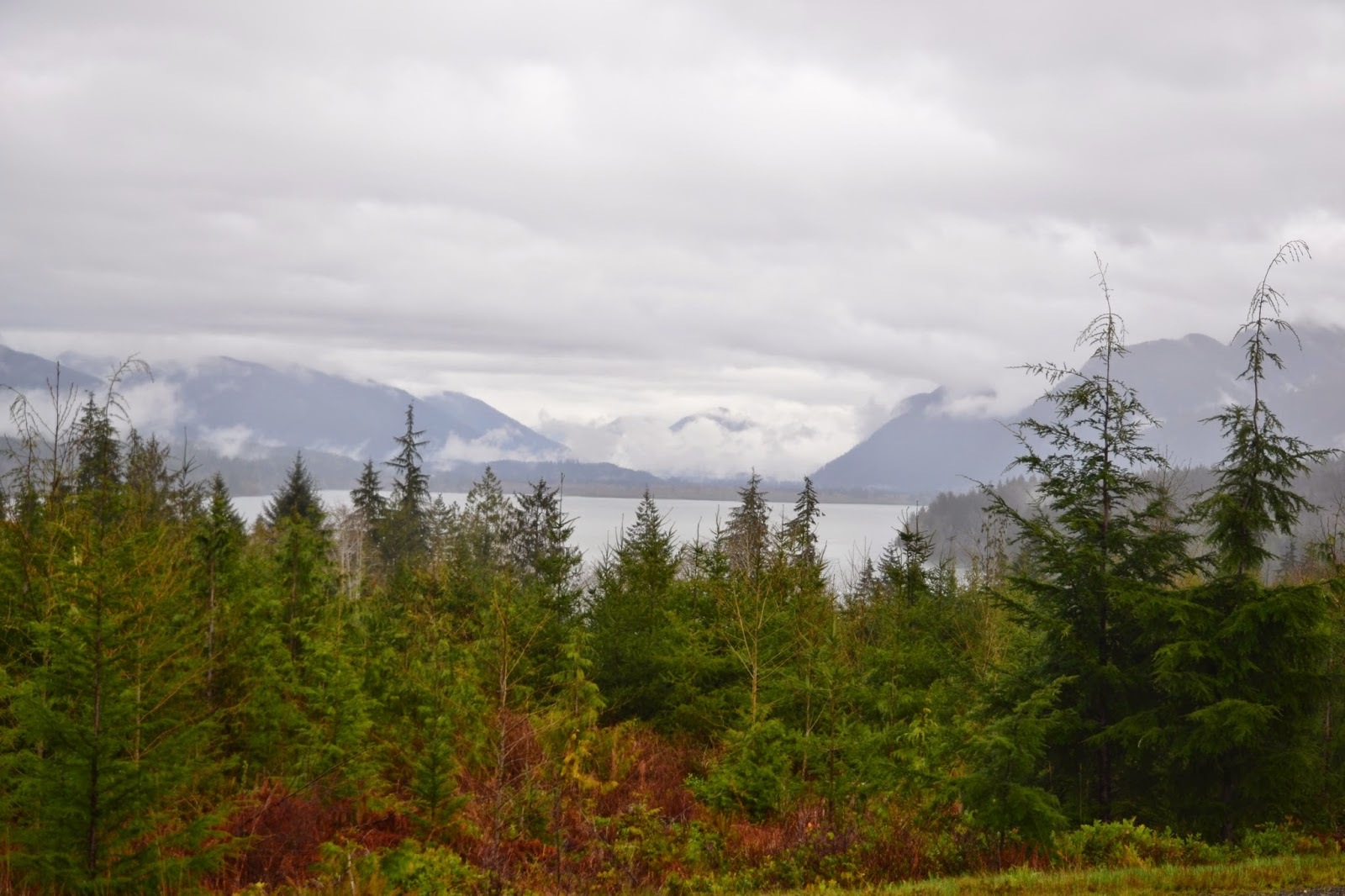 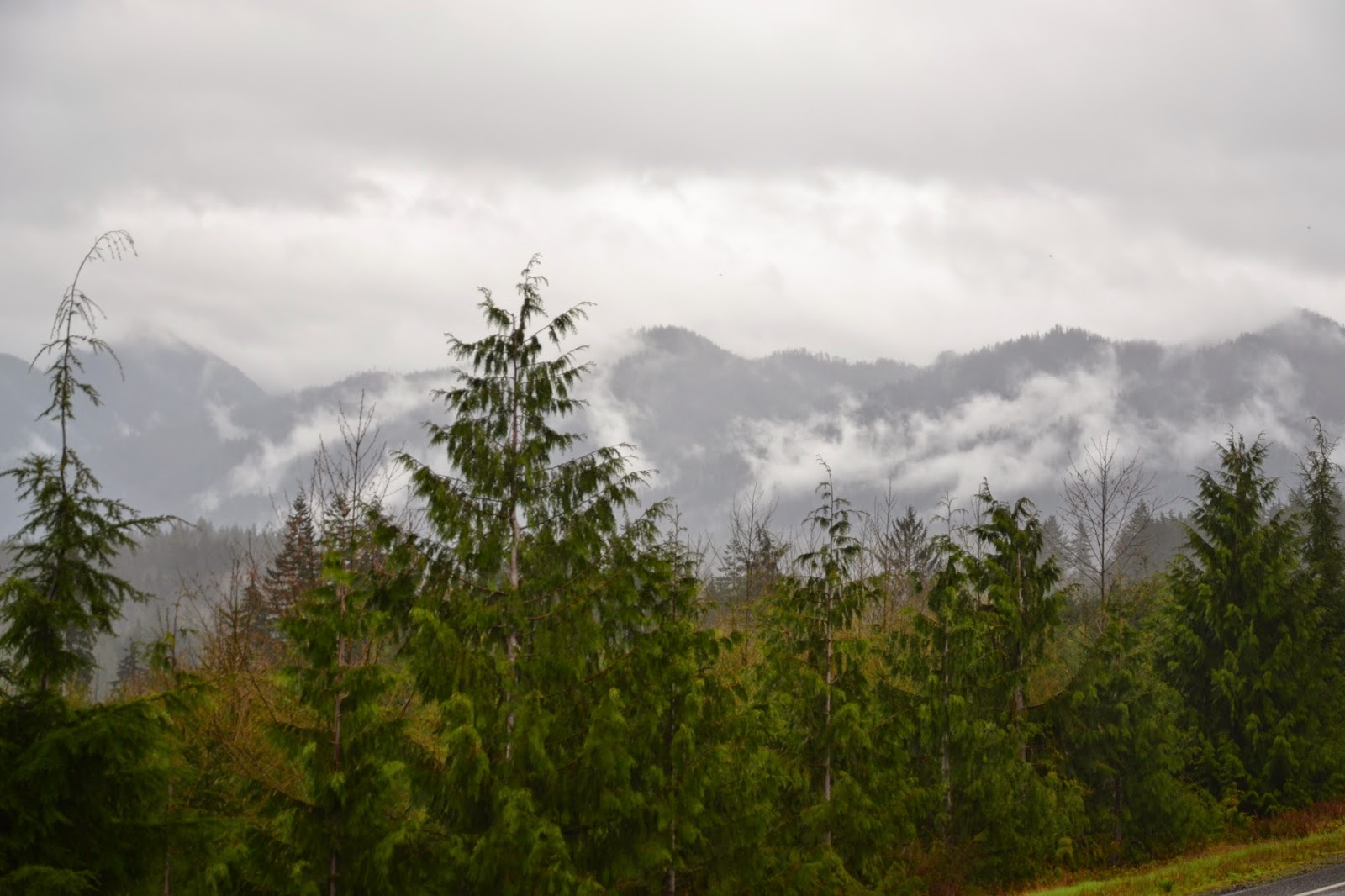