Oh wow, where were we?

Lots done, lots to talk about. Progress is being made.

Weird. These first pictures are so far back, they look strange to me.


I love that picture because it shows Sarah hard at work. She's out there with me every step of the way.


To be fair, it only looks better because Sarah vacuumed it. Yeah.


And then, suddenly, everything is black.


Honestly, I kind of liked the dark cave we created. But... Sarah is a creature of the sun. And there is so little of it up here sometimes that you must revel in every photon when you can.

Remember, the old way this was done? How they just nailed the siding up right on the studs and had no flashing or weather-proofing on the windows or doors? Yeah, not this guy.


When we went inside for the night to sleep, the windows felt really weird. I mean, we had blue tarps for a couple of weeks, then black tar paper for a few days. The clear windows left us feeling really exposed. I know there was no one out there looking, but still. Especially since I left the ladder right outside where I stopped working. Nothing like looking out your bedroom window and seeing a ladder.

So Sarah made curtains... Out of sheets.  It amazes me how she is able to take whatever, wherever and make it feel like home.


OK, time for a break.  Lots of work getting done. Time for some fun.

How about a concert at the George Gorge?

Dave Mathews? I think we will. 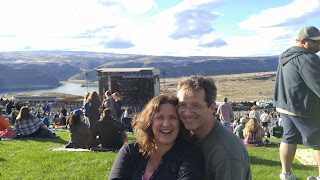 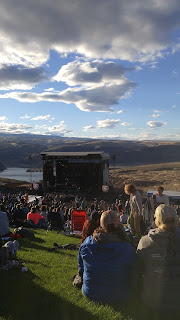 But, after a long day of fun and driving, it was back to work.

Those windows didn't put themselves in.


Posted by Adventure Nickel Farm at 8:26 PM No comments:

We made the turn around the corner and started working on the door-side of the house.

Speaking of doors.  Anybody want to guess what is wrong with ours? Sorry for the poor pictures. I'll give you two.  The first one doesn't show it well, but the second one does. Try your hand at the first one and then move on.

What important element is this house missing?


Apparently it isn't a load bearing area of the wall. And, I get it. It is supported by the marriage line studs to the right, but I sure would feel better with a nice header to support the wall and the door. The whole door frame was held in place by two screws.

So I made one.

Oh yeah, and this horror show got fixed too.

The lack of flashing rotted out the joist under the door and the floor.  So, we fixed it.

The brown stain you see on the left is a wood preservative. I couldn't get out every little piece of less than perfect wood without literally ripping down the whole wall. We do the best we can. And I added a little extra flashing tape.  Because.

We finally fixed one of our little details.

Let's play spot the difference.  What is different between the two photos? 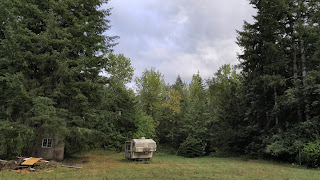 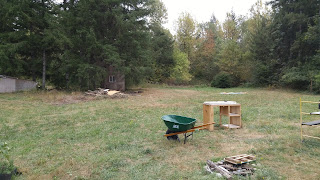 Yeah, we got rid of the nasty fifth wheel out back messing up the view.

And we found an old, children's hospital bed underneath it.

Gee, that's not creepy at all.

Speaking of creepy, the spiders here are just out of control. There are billions of little ones in the grass, in the house, all over. It's like it's the hottest spider dance club in town. Well, we've met the bouncers. These guys are huge. I think one played linebacker at the local high school.

I finally got a picture of one of the larger ones last night when I came home at two in the morning and was getting ready for a shower.

He had to die. I can't have that crawling on the ceiling above me while I'm naked.

He was big, but not bright enough to recognize the natural enemy of the spider: The Shop Vac. Another one, a little smaller, was hanging out in the bedroom, and he had to go too.

Maybe walls will help keep the spiders out. Gotta get those walls up.