I decided against doing a full write up like last time about the mudder.  Just don't have enough time right now to do it. I will do a quick run through. (Edit:  And then I wrote it anyway.)

When we started, it was around 50 degrees.  That sucked right there.  It sucked just getting undressed to shorts and a t-shirt for the run.  But we got registered and numbered and ready.  There was a little unfinished business from the last that I hoped to take care of.  There was a song they played while loading the paddock at SoCal and I forgot to ask what it was.  This time, I asked.  I love the song and it really helped set the tone for the event for me.  It was the Dropkick Murphy's 'Shipping up to Boston.'  So that alone was worth about half the day's discomfort.

The countdown finished and we set off.  The first obstacle was The Kiss of Mud.  Crawl on your belly through mud under barbed wire.  The cold added a degree of suck, but it wasn't too bad.  Everybody is still smiling.  Then, about 3/4 mile later is Arctic Enema.  Drop into ice filled water and then duck completely under while going under a plank they placed there to force you all the way under.

Already being cold made this one suck even more.  Once in the water your whole body stiffens.  Duck your head under and your brain follows suit.  Coming up on the other side it is disorienting and even easy to forget you are trying to get out of the water.  Once I got out though, it was the only time in the day that the air felt warm.

Then, back moving again.  Now all the smiles are gone and everyone seems to get the idea that this isn't just fun and giggles.  There will be pain.

After a short distance we got to Dirty Ballerina.  This is a series of mud filled trenches carved perpendicular to the path.  It could be described as a thin mud or very thick dirty water.  Gritty and about waist deep.  I had fun jumping up and splashing in the water.  And oddly enough, the mud seemed warm.  When it dried on your skin it seemed to protect from the wind a bit too.  The cold was an ever present obstacle made worse by the fact that we were unable to run due to an injury on the team.

Up next was cliffhanger.  Kind of a joke especially when compared to the SoCal version.  About a 20 foot tall steepish incline up a loose dirt slope.  Made it up no problem.

Obstacle 5 was Walk the Plank.  Tall platform you jump into the water.  It is amazing how much taller it looks from the top.  Still, don't think, just jump.  Again the water seems so warm compared to the air.  Pull yourself out and head to the next obstacle.

Trouble.  I did the course with my sister and my dad.  We got to the first set and Miche tried to get over.  Didn't make it.  So Dad and I boosted her and then she made it over.  Well, I tried to boost Dad and he missed his grip.  I probably didn't boost him high enough.  The end result is that my 66 year old father fell flat on his back from a height.  That sucked.  Immediately the other mudders came over and helped him up and then UP AND OVER THE WALL. Kudos to him for pressing on and to them for helping out.  We then repeated the process on the next wall minus the falling part.  Mudders are good people.

Logs stacked up with barbed wire and signs that tell you to go over some and under others.  Good obstacle.  The guy attending this one was pretty annoying though.  He kept playing Fur Elise on his bullhorn and shouting at us.  The Marines at SoCal were better motivators.  Go figure, right.

A series of trenches dug into the ground.  Each member of our team expressed the idea that it would have been nice to stay in there, out of the wind, where it was kind of warm.

King of the Mountain.

A pyramid like stack of round hay bales.  Climb up and over.  Not tremendously difficult, but not overly easy.  By this time we had met some other mudders and the conversation was going well.  Speaking of conversation, I have to add this conversation I overheard while on the course.

Guy: Got one of the shocks coming up next.
Girl: Shocks! Like electricity?
Guy: Yep.
Girl: I'm not doing it...why on earth would anyone do that to themselves.
Pause
Guy: Because there is a very small chance it might give you super powers.
Girl: Oh, yeah, that would be cool.

This obstacle could have been harder if it weren't for the help of your fellow mudders.  These are cargo nets strung up between trees.  If your fellow mudders are anchoring the nets, it is a reasonably easy climb up and over.  If they aren't it is a swaying unsteady mess.  We were anchored and then anchored one side for the next wave.  One group went to the other side, where there were no anchoring mudders and tried that.  It didn't look fun.  They had a part of their group then split off and anchor for the others.

Don't really remember this one.  Maybe it was a mud pit.  Maybe.

These are the tubes angled down into a mud/water pit.  The water was deeper this time than at SoCal.  Deep enough that you had to partially submerge your head in it while exiting the first down tunnel and then again to enter the up tunnel.  Good, thick mud that stays in your eyes for a while after you get it in there because you didn't expect it to get that deep that fast.  Oh well, live...learn.

Just like the Kiss of Mud, only with the added delight of electrified wires hanging down.  This one sticks in my brain.  I just sucks and the cold didn't help.  By this time the cold had stiffened me up enough that flexing joints weren't working as well as I would want them too.  And the mud had completely obscured my eyes and glasses.  Good times.

I really liked this obstacle.  Physically and mentally challenging enough.  Here the built the obligatory mud pit and then a series of floorless corridors over it.  To cross you had to traverse along the walls a series of 2x4's nailed along the side.  These are only...duh...2 inches and they are muddy and slick as hell.  I managed across with a few slippery moments.  Good one.

Another good one.  The approach just looks like a large 50 foot square box rising a few feet off the ground with some ominous rumbling issuing from within.  Barbed wire forces you on to your belly as you drag your self along and past some dangling flaps of carpet which are the entries into the box.  Beyond, it is some electric wires dangling down and another carpet flap.  Beyond that you enter a really dark chamber.  You can hear the tell tale zap of the electric wires accompanied by the squeal and curses of your fellow mudders.  Then lights flash and there is a loud thunder sound.  For a brief moment you can see the wires dangling from above you randomly placed in the compartment.  There are also sprinkler heads spraying water on you.  Still, it was warmer than outside.

Now this is what I was expecting.  A long series of trenches filled with various viscosities of mud.  Some thin and watery obscuring the holes and hills underneath.  Some is thick and tries to suck your shoes off your feet.  This lasted for a hundred yards or so and was fun.  Also, mud=warm.

Another one that doesn't really compare to the SoCal counterpart.  It was nice and the extra weight of the wood helped warm up the muscles and felt pretty good actually.  It wasn't carrying a log up a ski slope, but it was still good.

OK, having completed this one at the other mudder, it didn't intimidate me anymore.  It probably should have.  The bars were much muddier this time which means they were slipperier.  Add the cold and you the subsequent difficulty closing your hands and it was a very tough obstacle this time.  I made it, but I was slow and constantly worried I was about to fall.  My shoulder still hurt.  Classic Tough Mudder.

Same walls, but higher and with the 2x4 kick step at the bottom.  After the first incident, my dad wisely chose to go around.  I was thankful for that.  I managed to get over, but it was harder than I remembered.  A combination of the cold and not training for this one as hard as I had trained for the last.  Dang cross country moves.

Another Tough Mudder classic.  I like this obstacle.  Again a little more trouble than the last time.  Thankfully they didn't have the water cannon going this time.  That might have been the end of poor old me.

The classic obstacle at the finish.  Lots of mud and lots of hanging electric wires.  With the finish line in sight, and the prospect of being warm and dry again a real possibility, we went for it.  I thought of linking arms and running through as a team, but I had been shocked so hard last time that I fell and I didn't want to cause my teammates to fall with me.  Michelle had been thus far impervious to the shocks.  So we went.  I cleared the last line after several strong shocks only to hear the emcee say, "Get in there and help him out."  I turned to look and see dad face down in the mud.  He then had the presence of mind to get to his hands and knees and crawl perpendicular to the flow of the box to get out as quickly as possible.  I watched this obstacle at the last mudder and can't count how many I saw that just lie there in a daze when they fell getting shocked over and over until a fellow mudder grabbed and pulled them out.  Not Dad.  When he went down he was up and out before I could turn and make the three feet back in to get him.  Michelle just stood at his side trying to help and getting zapped over and over.  Again, she didn't seem to mind with the shocks.

They were handing out the reflective shiny blankets at the end with the headbands.  The cold sucked.  We didn't stick around for the party and it didn't look like many did.  Too cold and miserable.

Both Michelle and Dad have expressed interest in doing another Tough Mudder.  I cam going to concentrate on next year's goal; a marathon.  I purposely left out much of the narrative of Dad and Michelle, I figure if they want to tell their experience, they will.  I will however, share a few pictures. 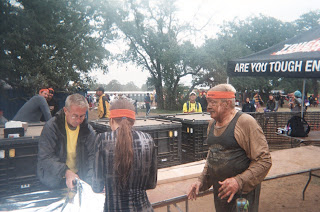 Collecting their blankets at the finish line. 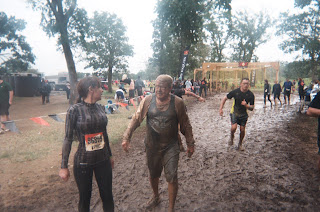 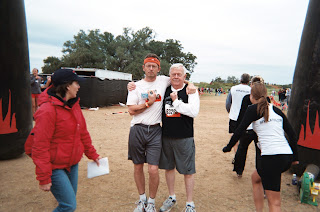 At the start.  Wow, what a difference a mudder makes in shirt colors. 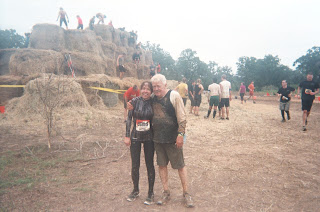 Father daughter bonding after the King of the Hill 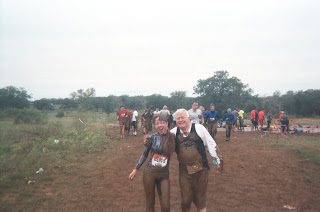 Posted by Adventure Nickel Farm at 7:21 PM No comments:

Lot to talk about and very little energy with which to talk.

Worked three days and then went to Austin to do the Tough Mudder with my Dad and Sister.  I am debating with myself about writing a full course report like last time.  Just don't know yet.

Got home today, so glad to see the family.  Tonight, right at bedtime, Max had a glowstick and managed to break it open and pour it into his eyes.  Had to dump him into the shower and flush him out.  I do believe he will be fine.  Just a little more excitement than I wanted.

Posted by Adventure Nickel Farm at 8:23 PM No comments: