Believe it or not, I voluntarily went to a place called Spider Lake.

But, before all of that, there were more cute river otters this morning when I went out to take the dog for his morning constitutional. 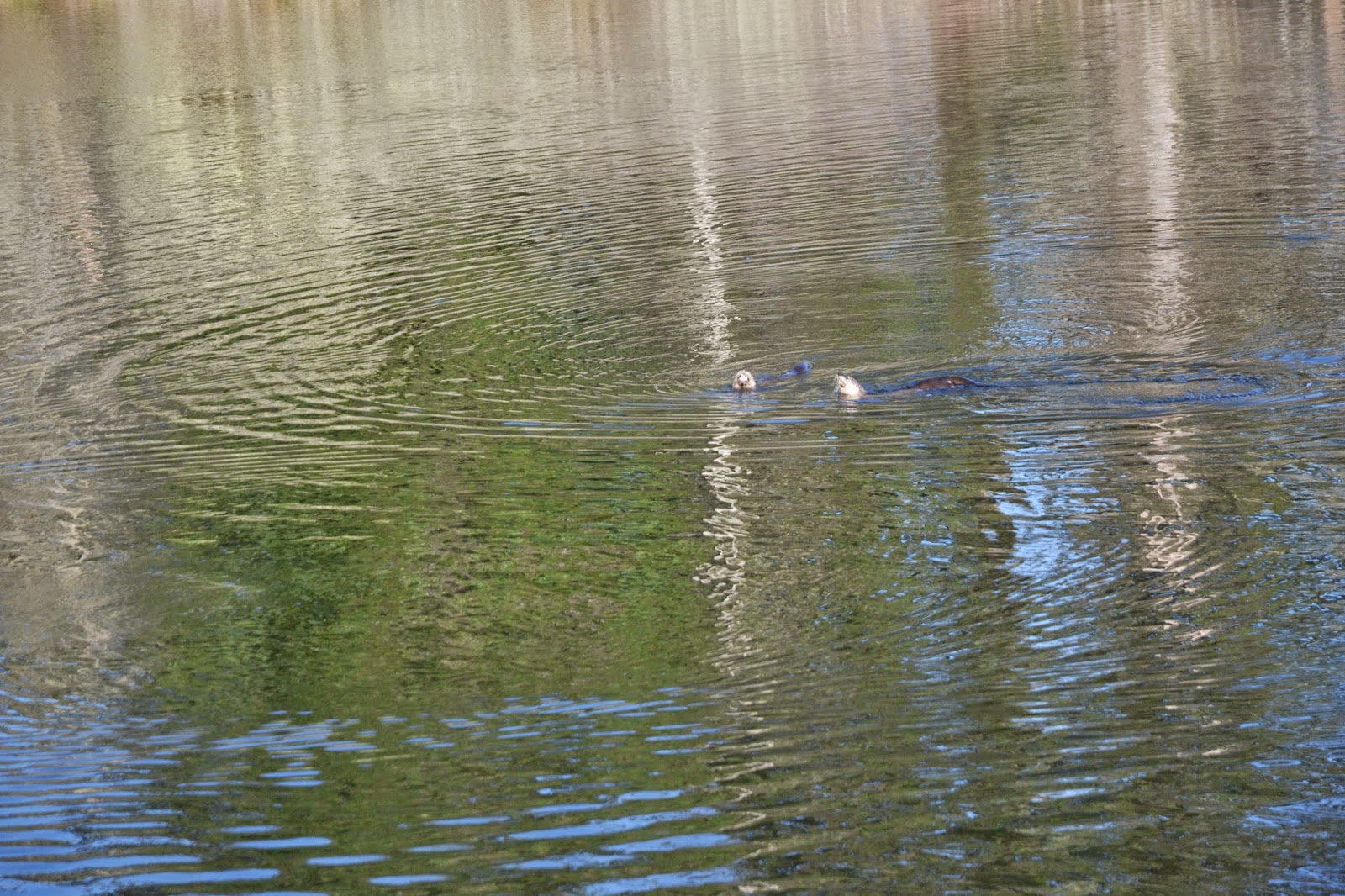 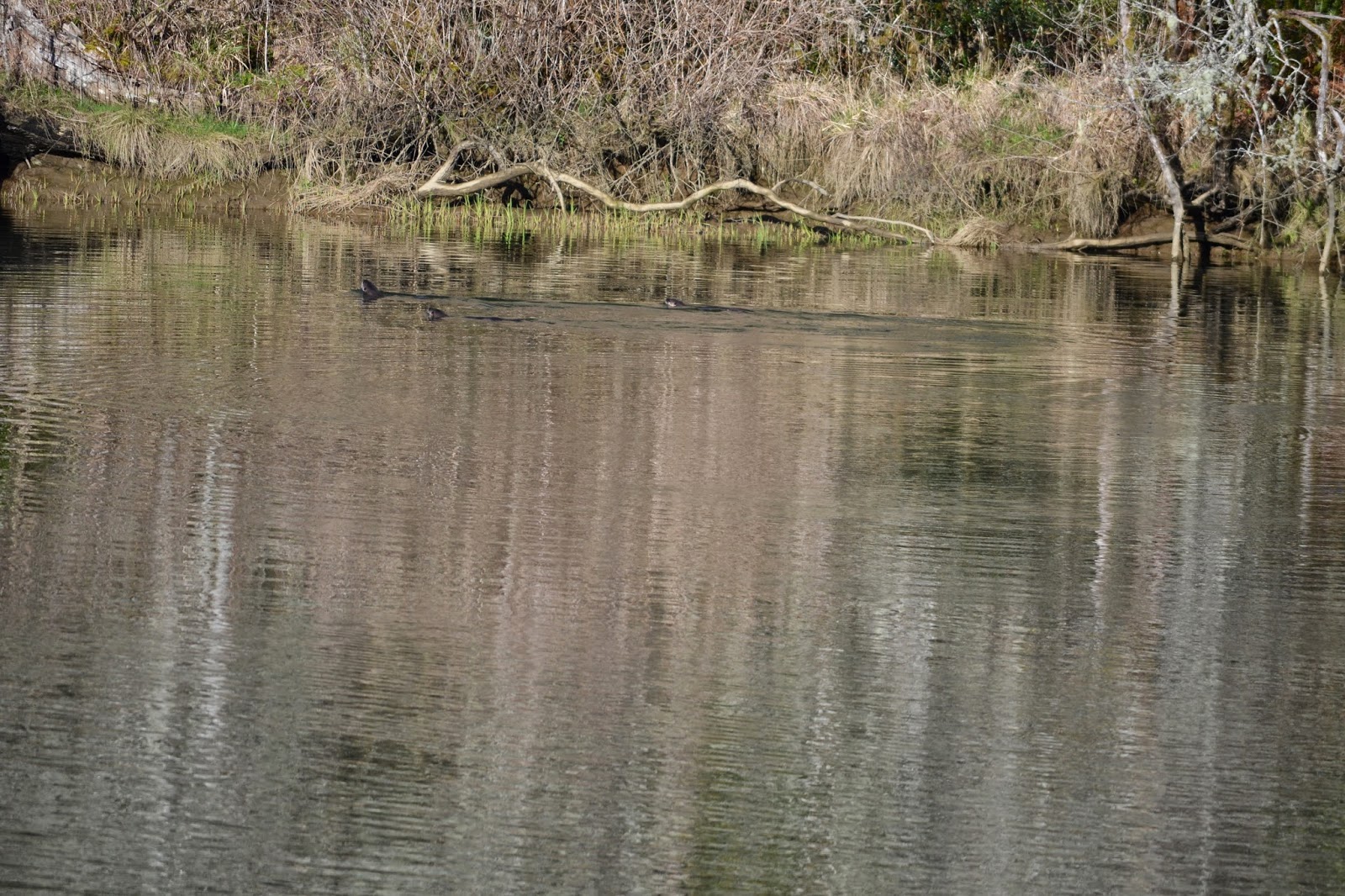 But, no time for frivolity.  We only have a couple of days until I have to go back to work and we must use them wisely.  Not only that, but you have to do something cool on a February day that looks like this.

Sarah arranged to meet up with our great friend Ruthie and her gang for a hike and some scenery somewhere somewhat equidistant from us.  After some debate and Googling, they hit on Spider Lake and the High Steel Bridge.  We decided to meet there around 11:30 and then hike around the lake before heading over to the bridge. Consult with Google Maps and (doot, deet, doot, deeeeee.)  That will be about a two hour drive.  Fine, plan on leaving around 0900.

Up and at it, saw the otters (which verified the camera worked...I learn slowly, but I do learn.)

We were off.  And about the time we wanted to leave, awesome.  We set out with the directions written down.  The first turn doesn't make sense.  Why did we have to drive so far on a parallel surface road?  If we had stayed on the highway it would have taken us there a few exits later and likely much faster.  Hmmm.  Whatever.  Then we turned on the designated road.  This road twisted and turned through pretty, pastoral scenery.  Gradually it grew smaller and less well maintained until it turned into a gravel road.  Then, something unexpected happened.  It ended.

Yup.  The road, which Google Maps assured us was the Forest Service Road 225something, abruptly terminated at someone's driveway.  Check the map and the bold blue line ran right through that guy's house. Well, now what?

Not to be deterred, we backtracked and found another road which appeared to parallel the projected track for a while and joined up again later.  So, we tried it.  It was a rough logging truck road pockmarked with 50 gallon potholes.  This wasn't so reassuring, but sure enough, it curved back around and we were back on the right road.  It was slow going.  Aside from the huge holes all over the place, the ruts in the road were made by high clearance vehicles.  For those that aren't sure, the 99 Honda Civic is not a high clearance vehicle.  It is, however, Hondo the Adventure Car.  So he was totally up for this.  So what if we scraped all the loose wires and pointy metal things off the underside of the car?  It was probably extra anyway.Things were going well, if a little slow, until the road ended again.  This time the end came in the form of a large, orange, metal bar across the road with some signage saying something like crossing this border will unleash the Sasquatch Army.  Regardless, Hondo doesn't come equipped with a battering ram attachment.

However, there was another little side road that looked like it might be going in the same direction we needed to be going.  We were far enough out that we didn't have cell service and Sarah's phone had the original map on it, from earlier.  What the heck?  Let's go.  So we took the side road, and in a few short minutes, Google Maps reported we were driving through the wilderness.  Hey, what's an adventure day with working maps? We kept orienteering and driving until we started climbing this mountain.  As we broke out into a freshly cut area at a higher elevation, cell service returned and we updated the map.  The good news was that we were out of the wilderness and back on a road.  The bad news was that the map showed the road ending soon.  Oh well, we were off the map a minute ago.  It was at least worth the check.  It was now 11:30.  We weren't going to make our scheduled meeting time.  Since she had service, Sarah called Ruthie and texted her trying to let her know what was going on.  No answer.  Figures, she was probably just as far out as we were.

Then, it happened.  The road ended again.  Except this time, it ended.  I mean, ended.

The view was awesome.  Might as well get out and have a look.

As nice as the view was, it was time to get back on the road.  We loaded back up and started driving, with no maps or GPS to speak of.  We turned around thinking we might be able to find our way back the way we came.  This time we decided to keep the camera up in the front with us to capture some of the adventure.  If we weren't going to make the Spider Lake hike, this was our adventure. 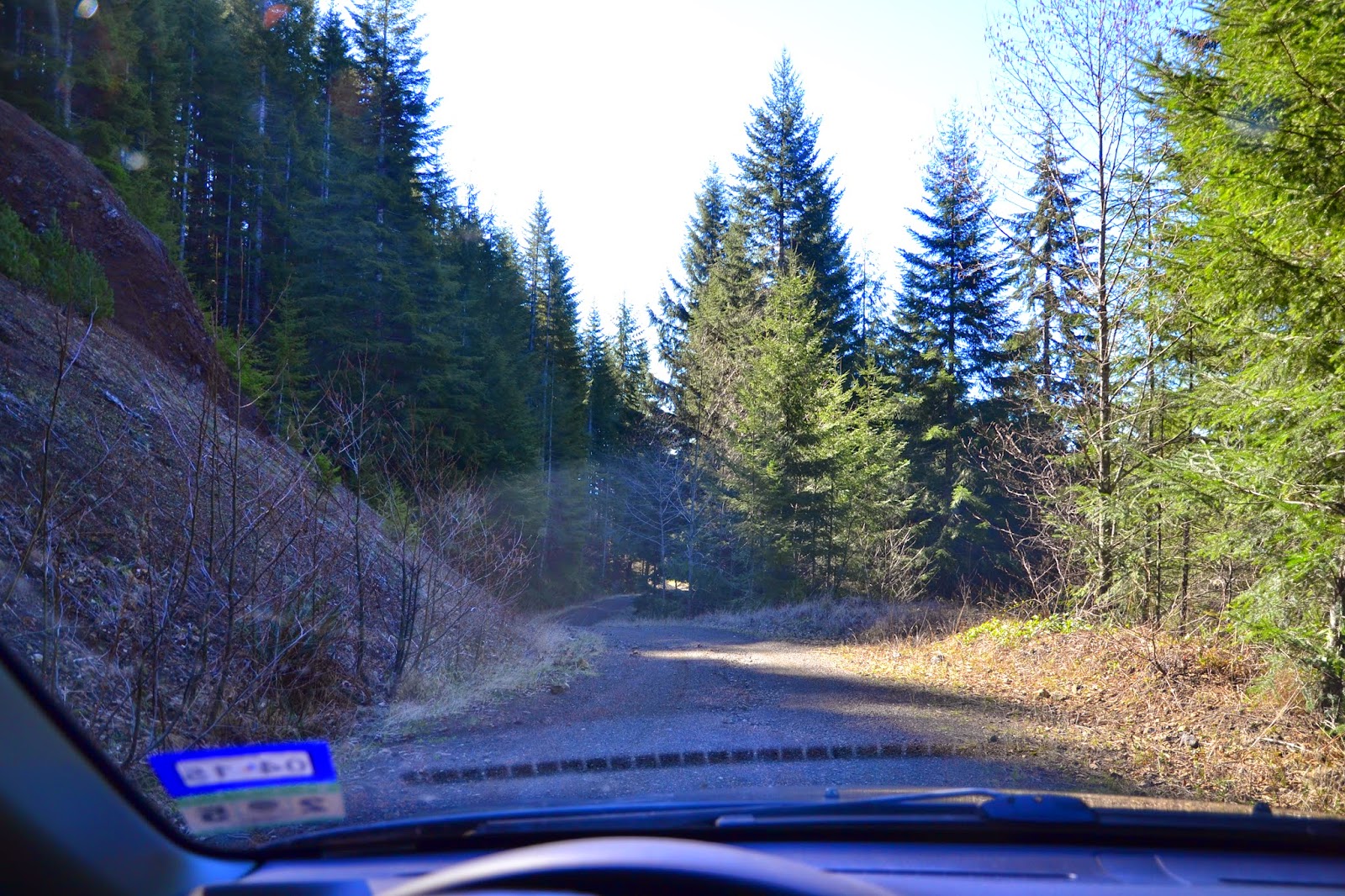 When we passed back through the area where Sarah had service, she was able to load the map again and plot us a course to Spider Lake. If it could be believed, we were 14 miles and just over an hour away.  Well, we had come this far.

No way we were going to make it though. 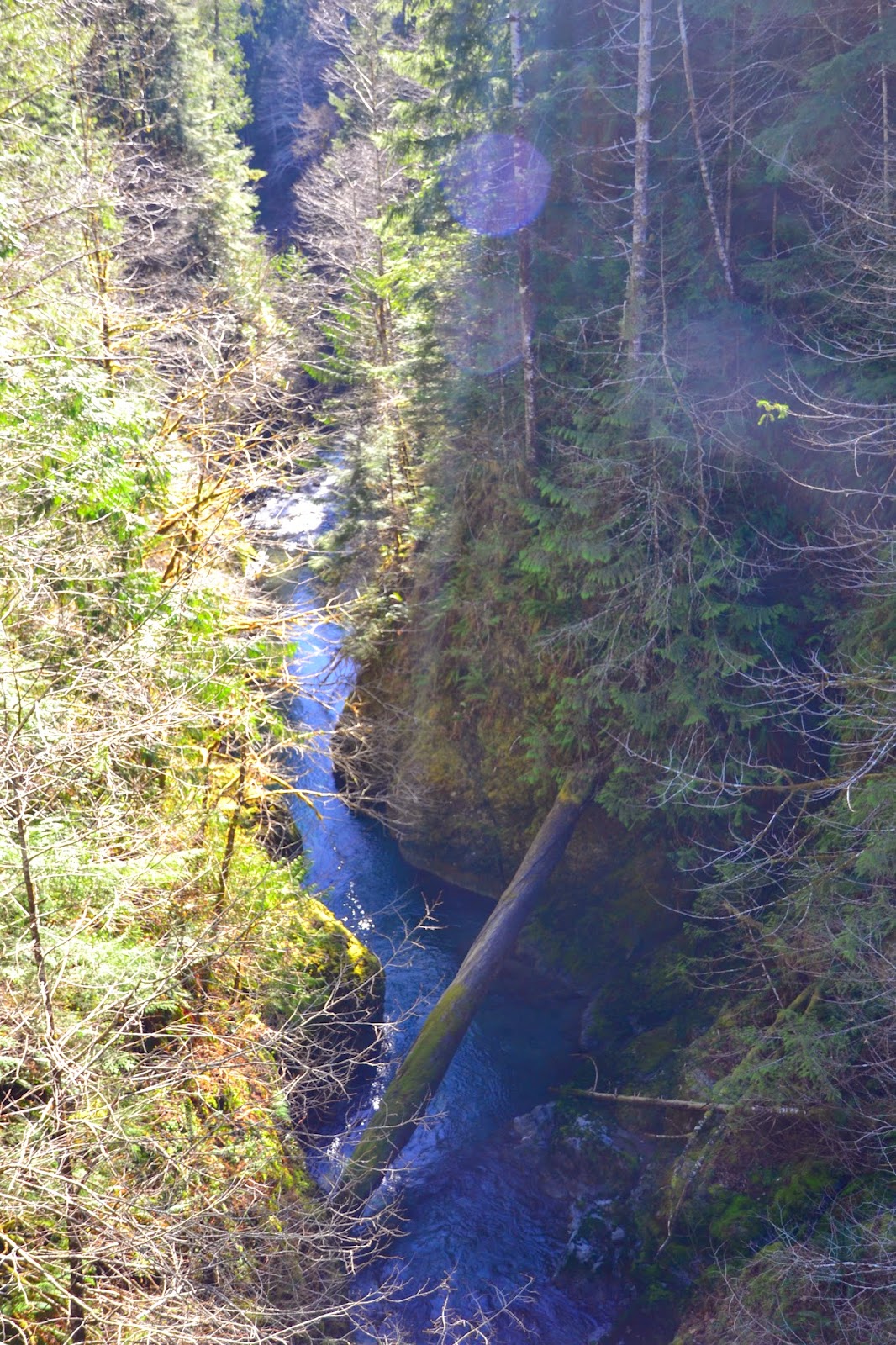 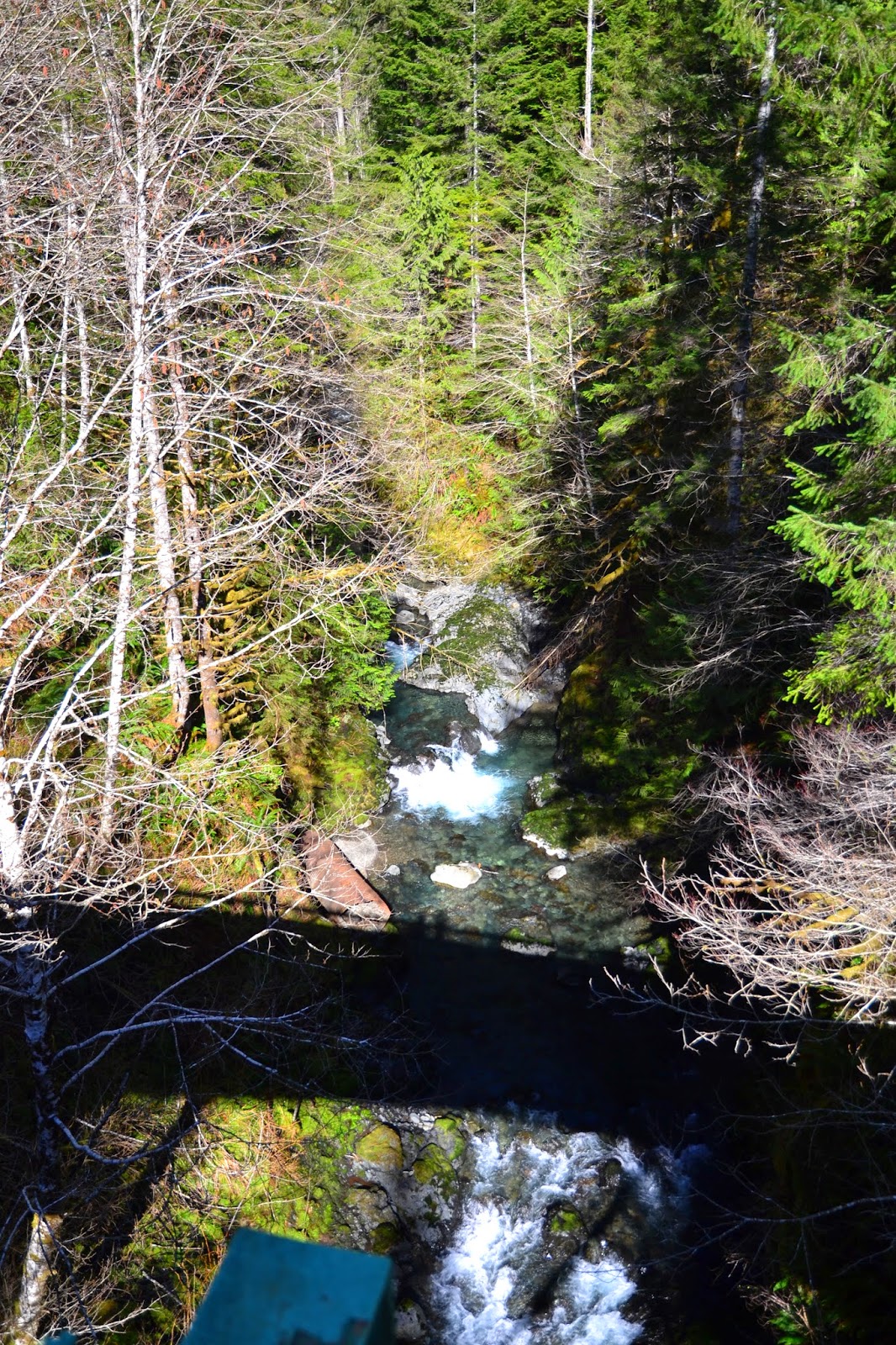 Amazingly enough, we found it.  There were 4-5 cars parked at the side of the road and a sign saying Spider Lk.  Taped to it was a sign telling some family called the Gadens that Ruthie and co. were out on the trail.  We went out and decided to hike fast and hopefully catch them. 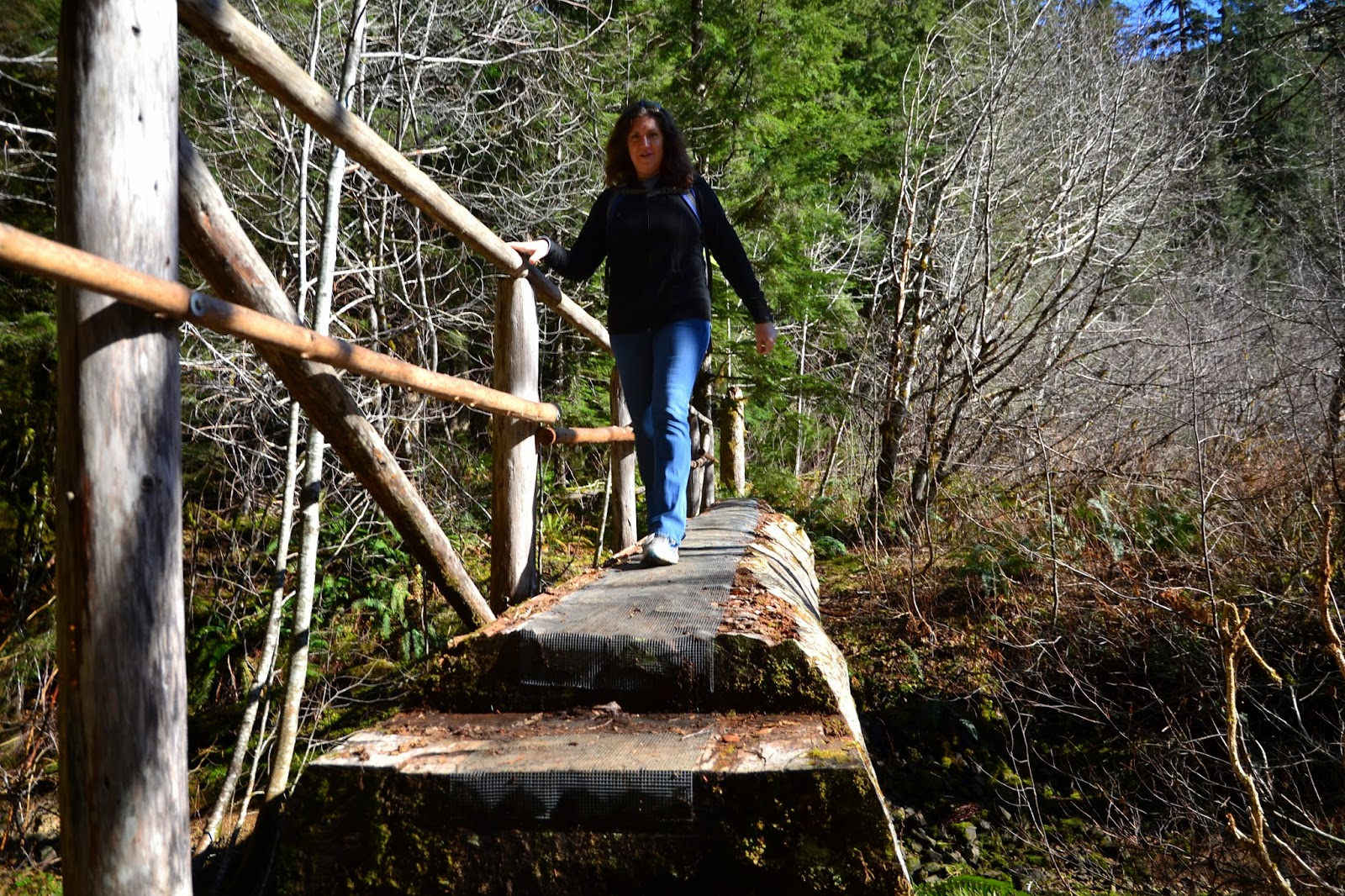 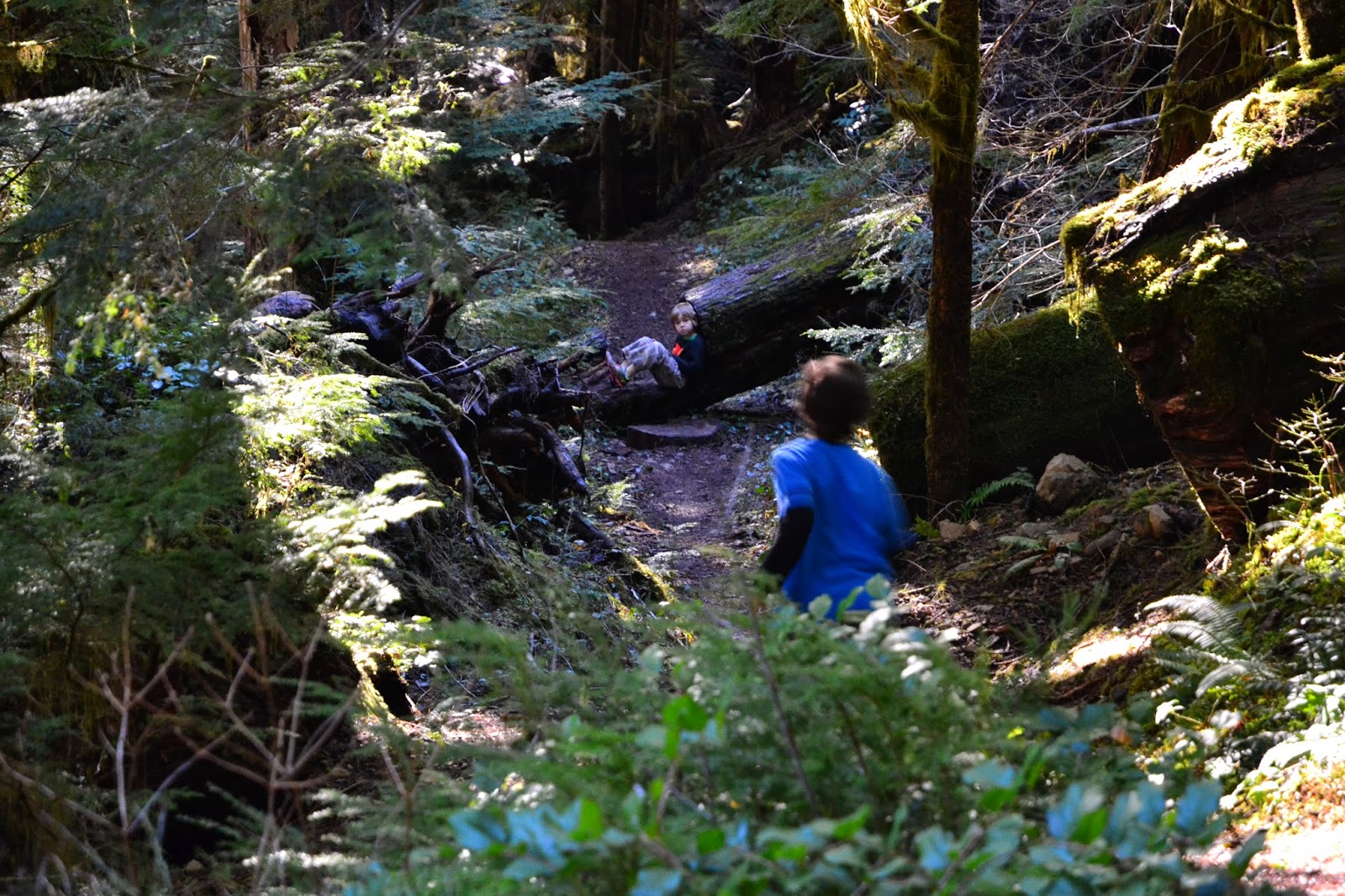 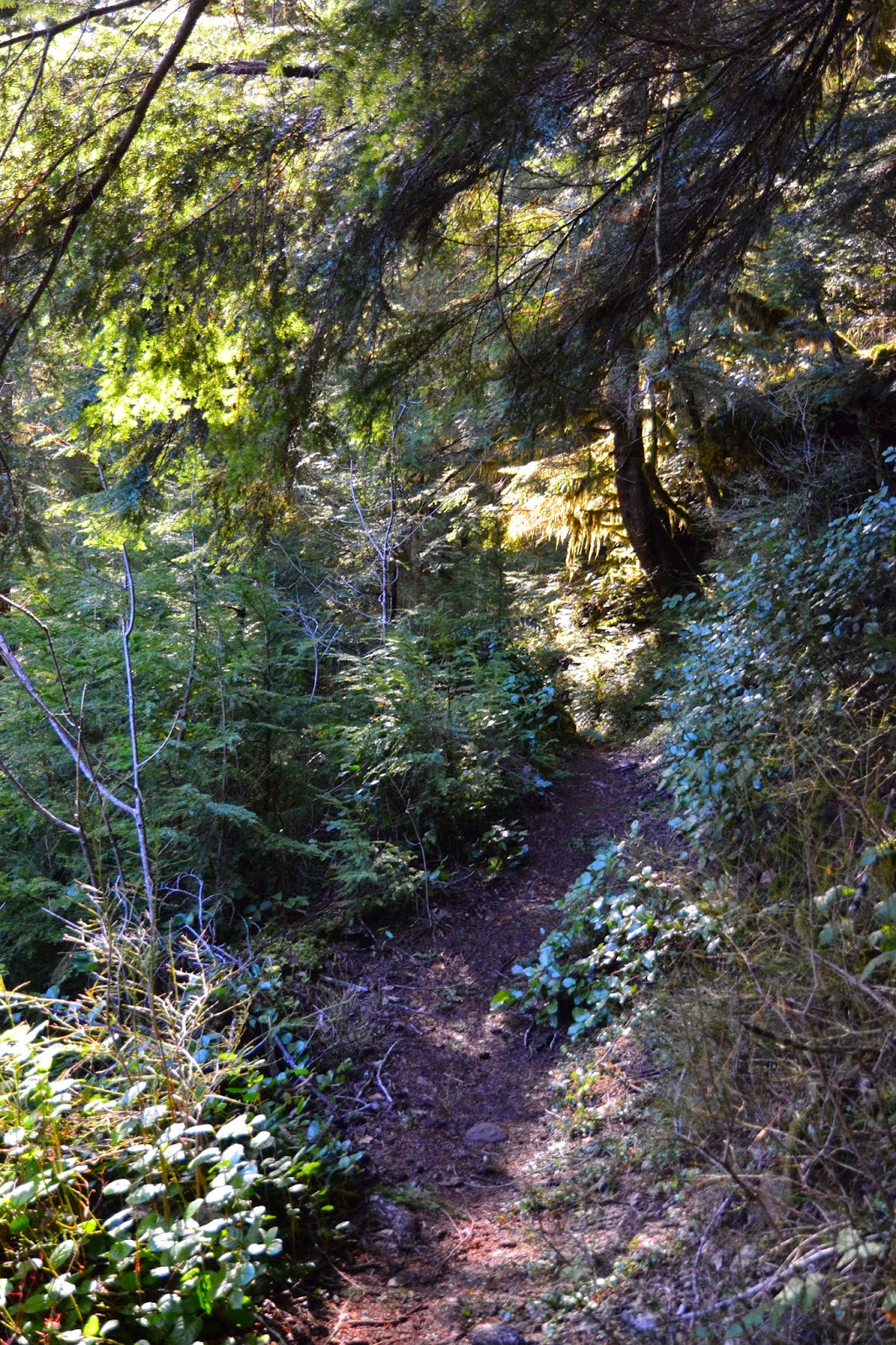 On previous hikes with Ruthie, she told us of this call she made when her kids were far enough ahead that she couldn't see them.  If they answered, she knew they were OK.  So, when I heard someone that sounded familiar, I made the call.  Sure enough, I heard a squeal and looked across the lake. 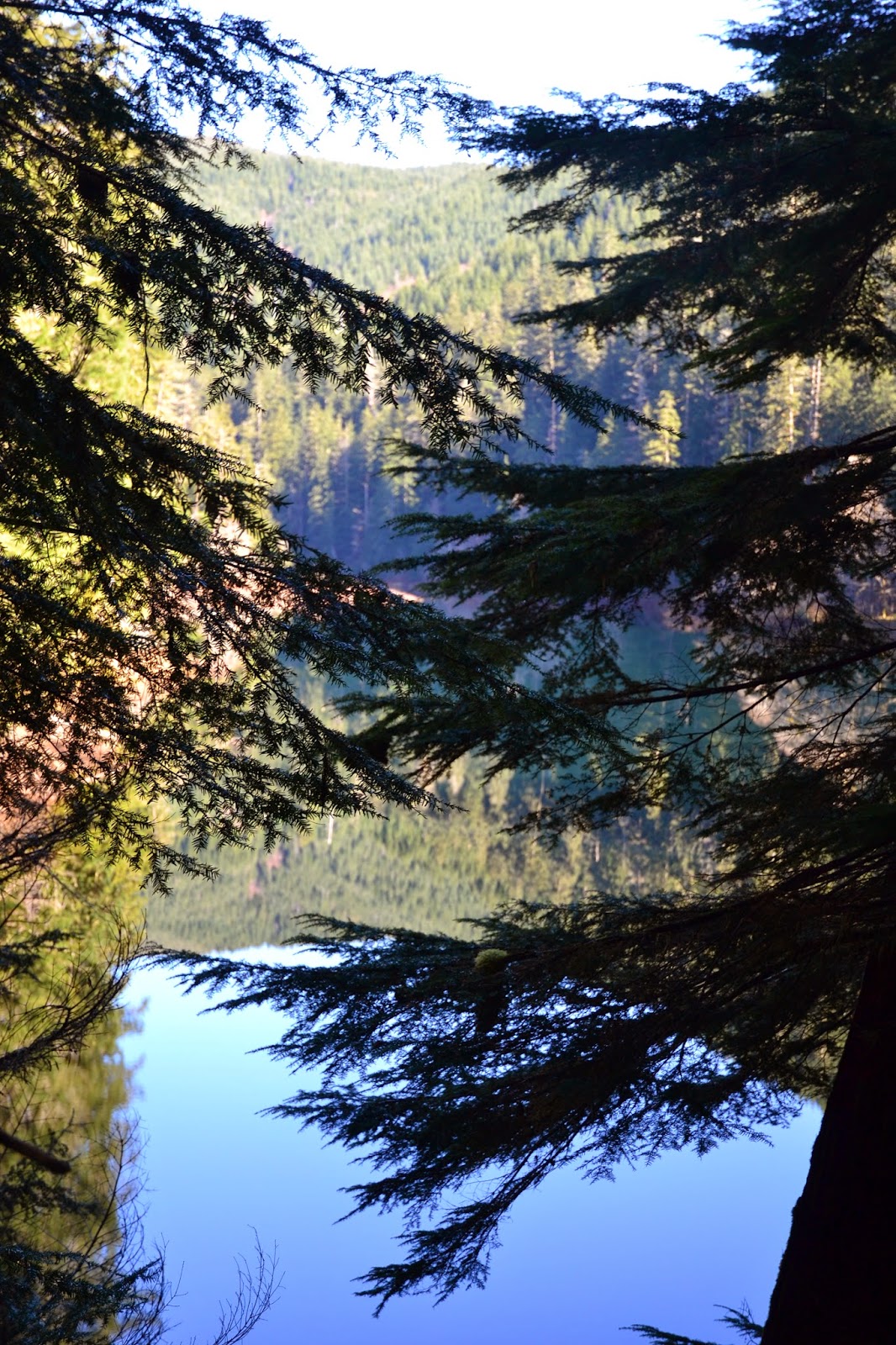 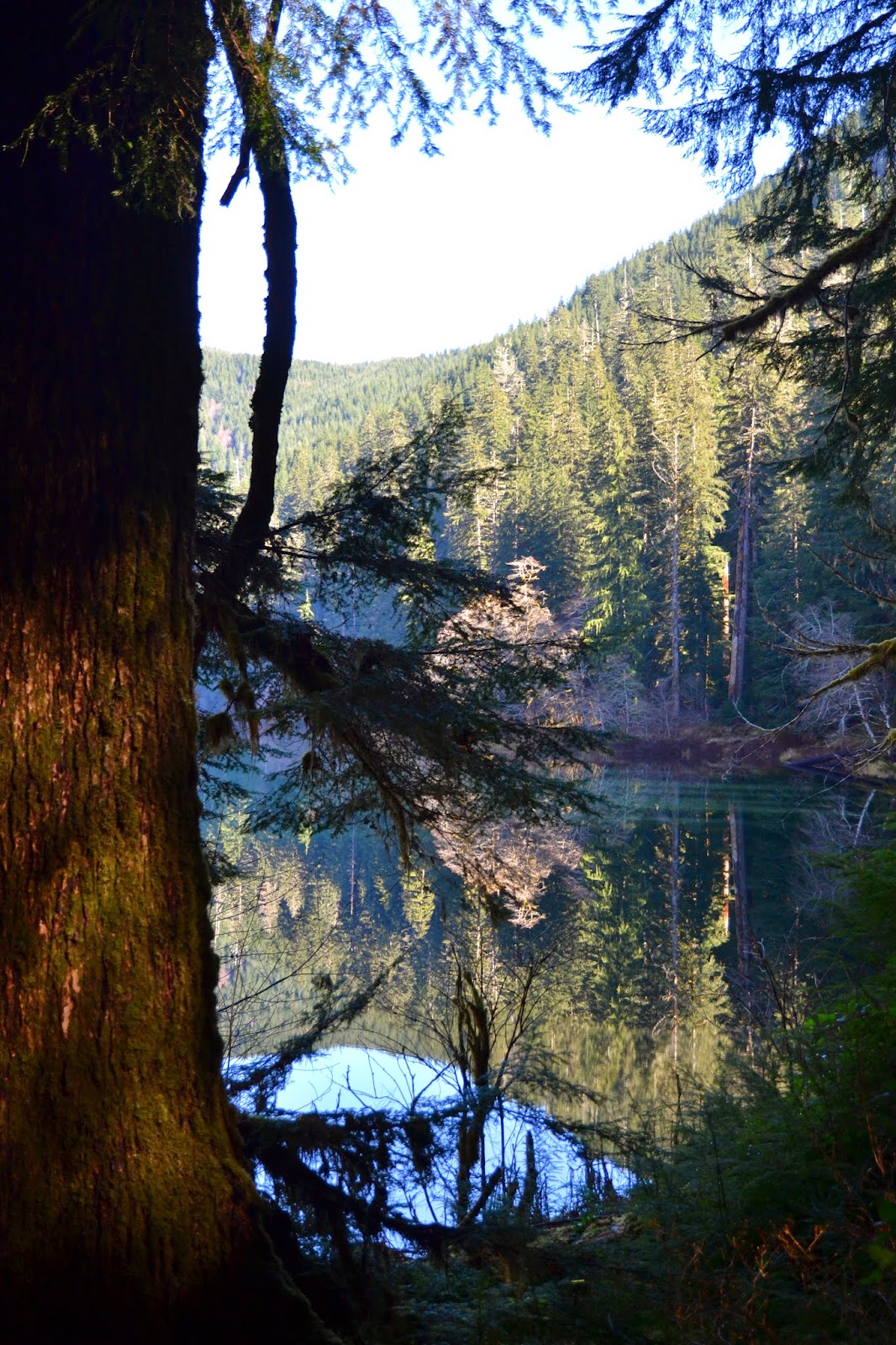 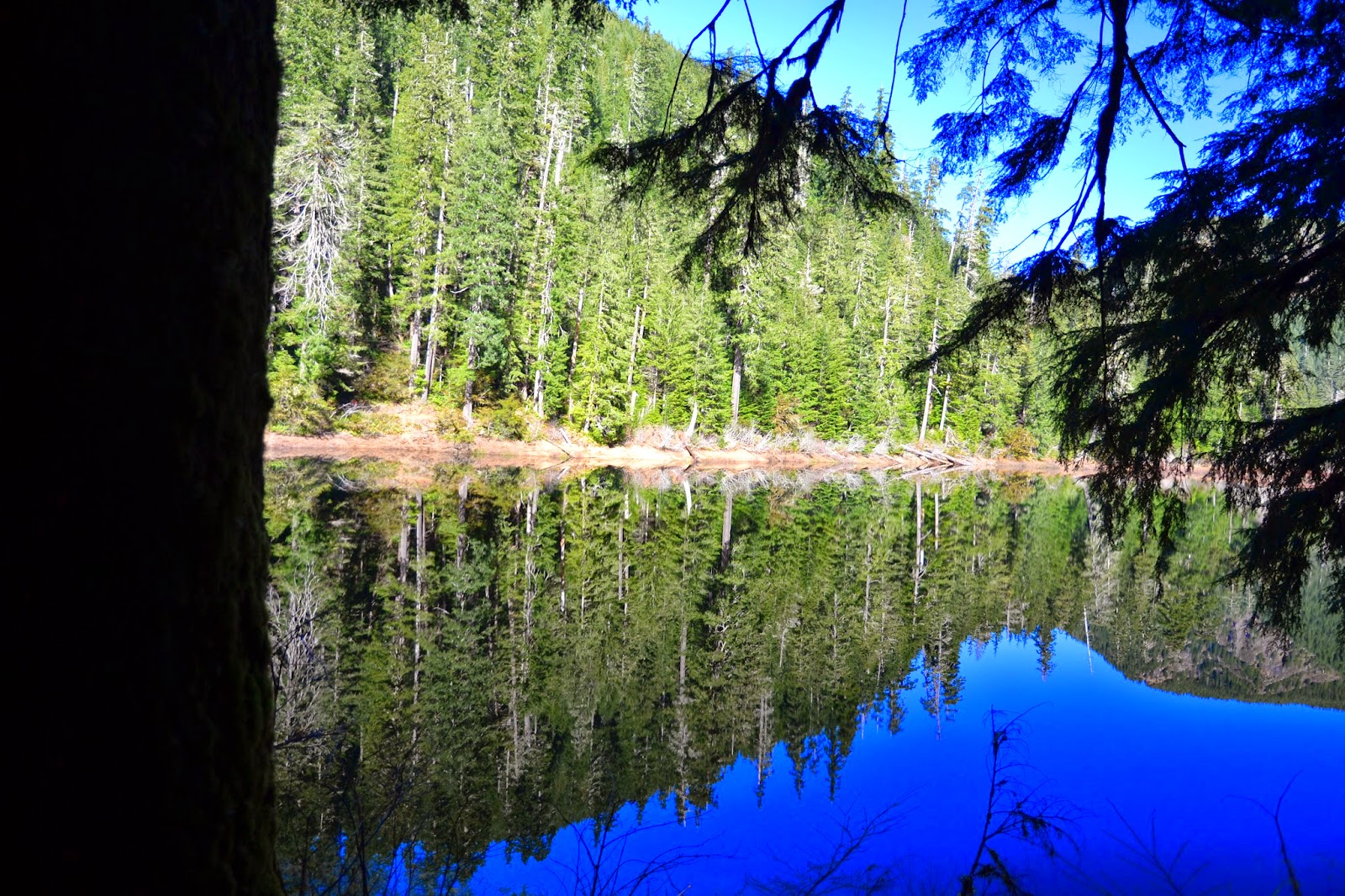 They turned around and ran back to us.  We hiked faster and caught up.  It was a joyous reunion on the trail.  The kids started right where they left off and so did the adults.  We got back to hiking and taking pictures. 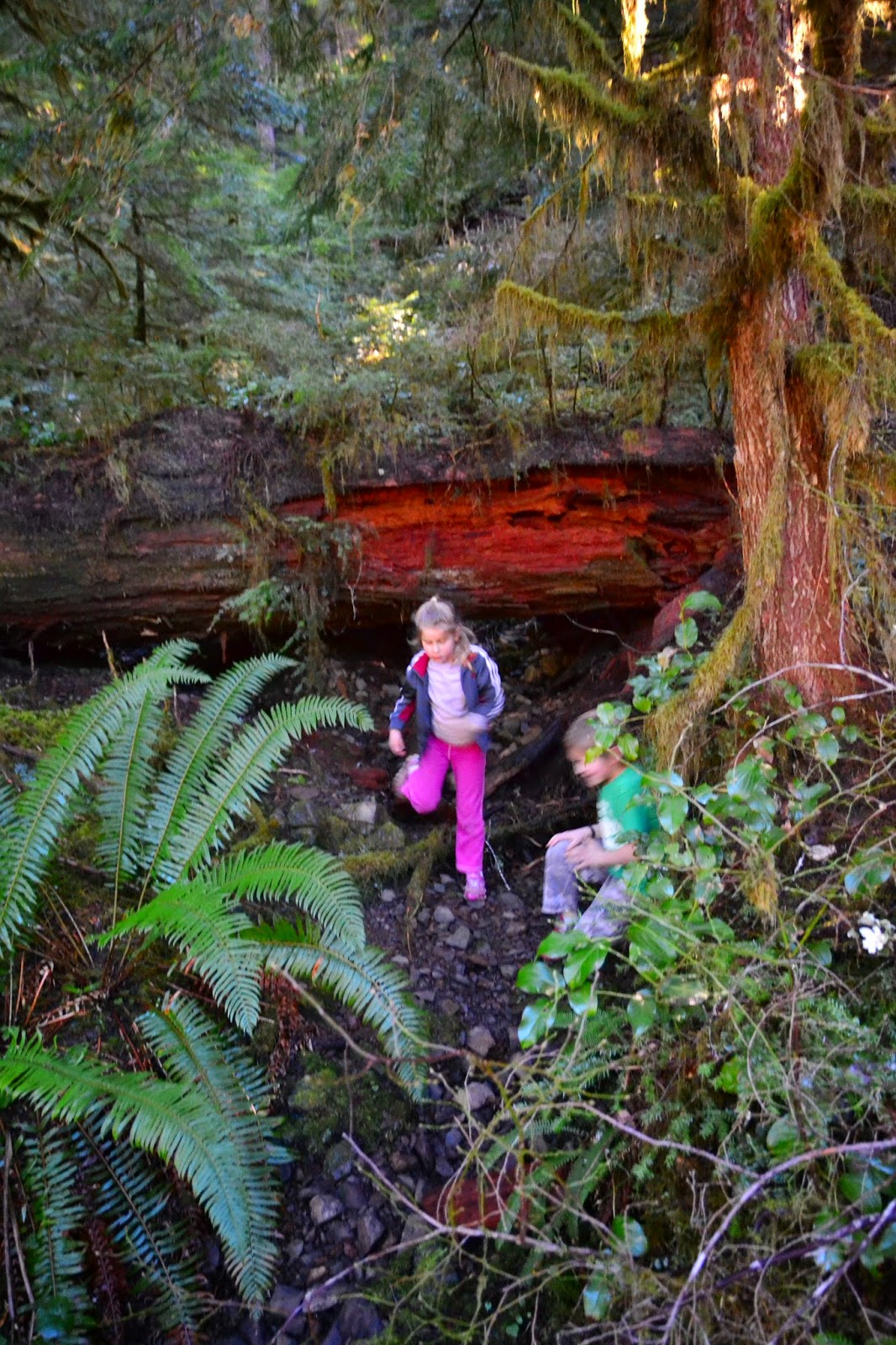 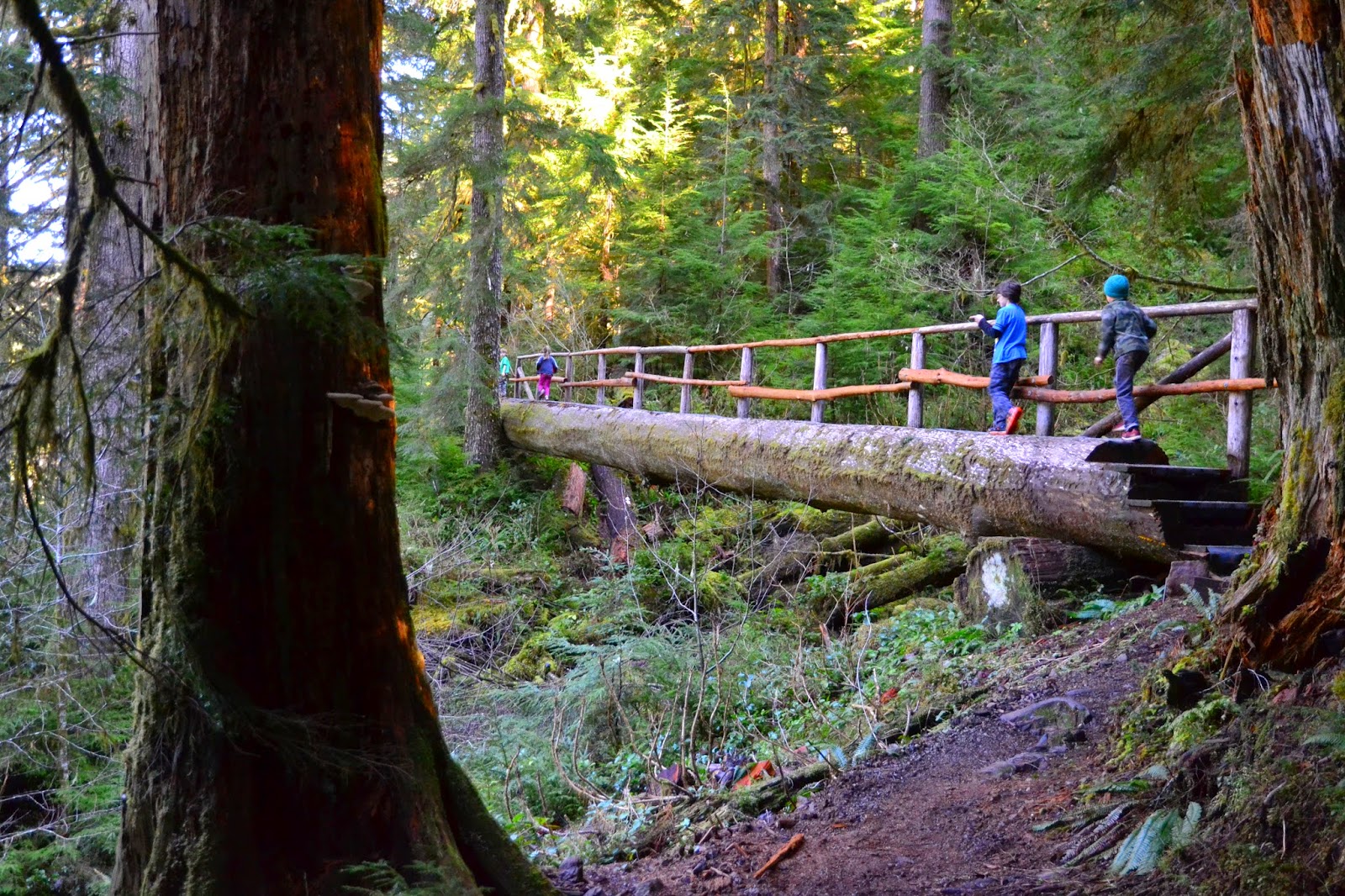 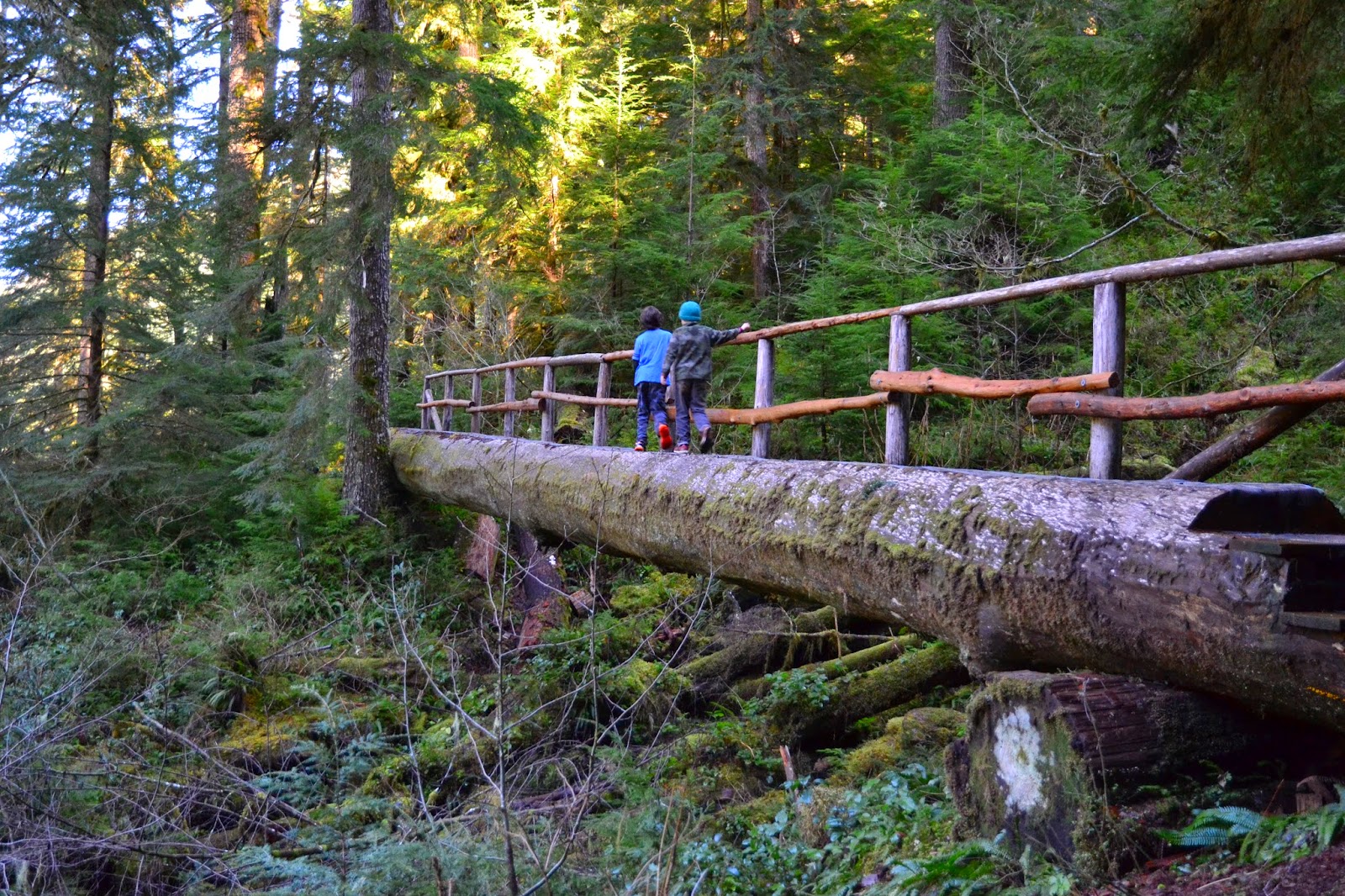 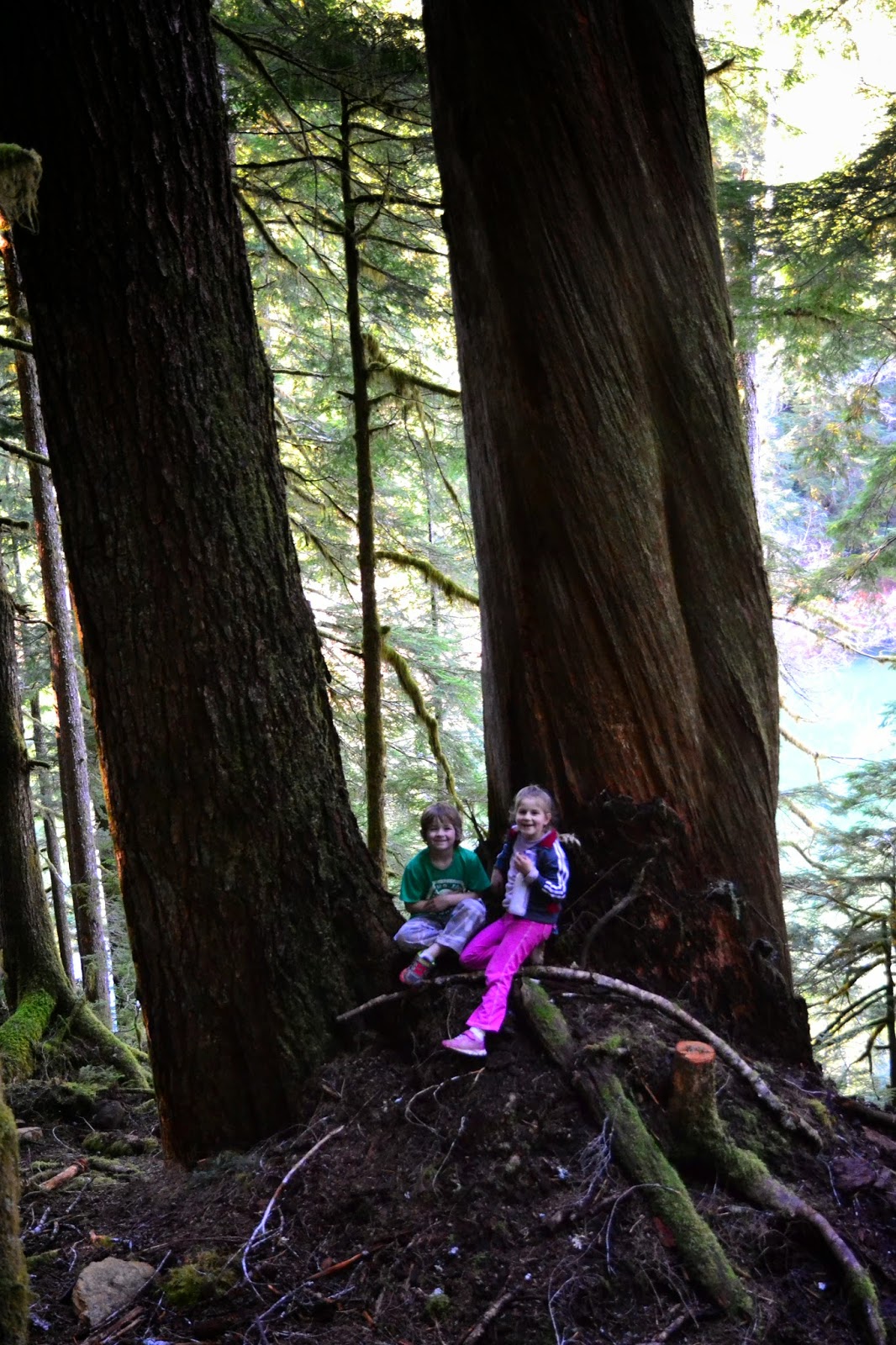 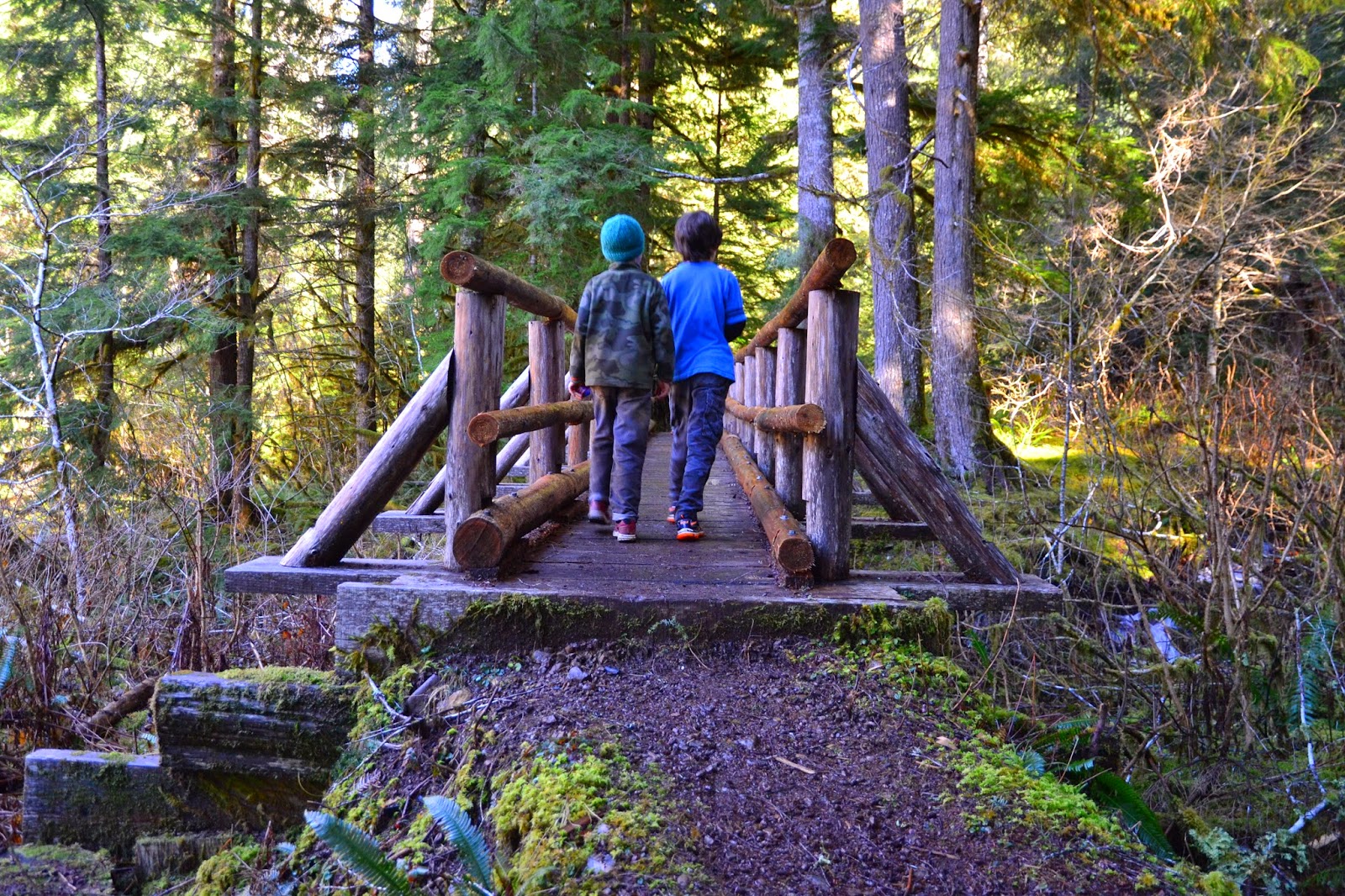 We finished the loop trail and loaded back up into the cars to go to the High Steel Bridge.  There is another older, probably cooler bridge that you aren't supposed to go to.  We would totally have gone if the kids weren't with us, but alas.  This was pretty cool though.

We hiked around and goofed off for a while.  Then I saw this sign. 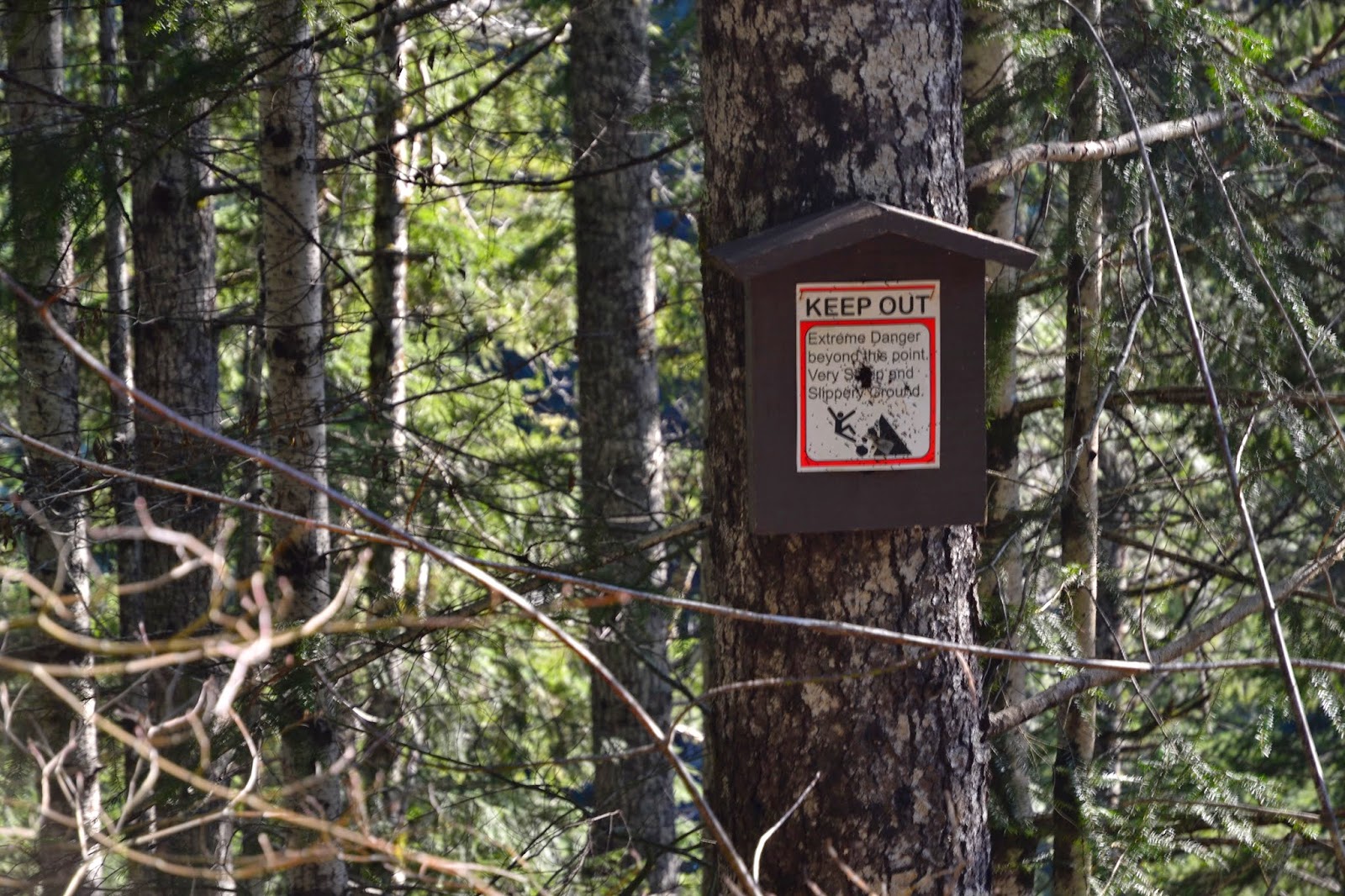 So, I had to give Sarah the car keys before I went over the side and got this picture. 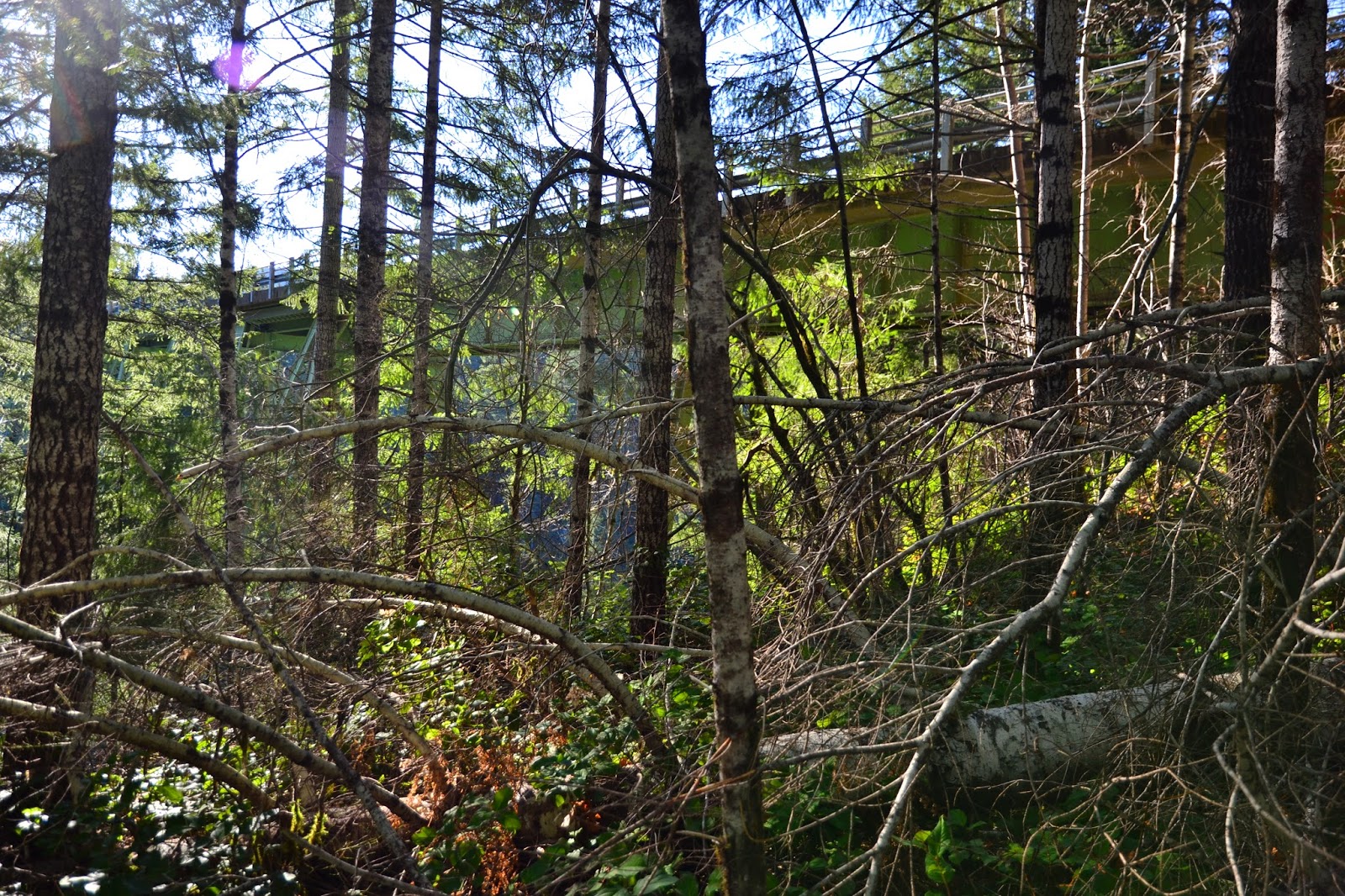 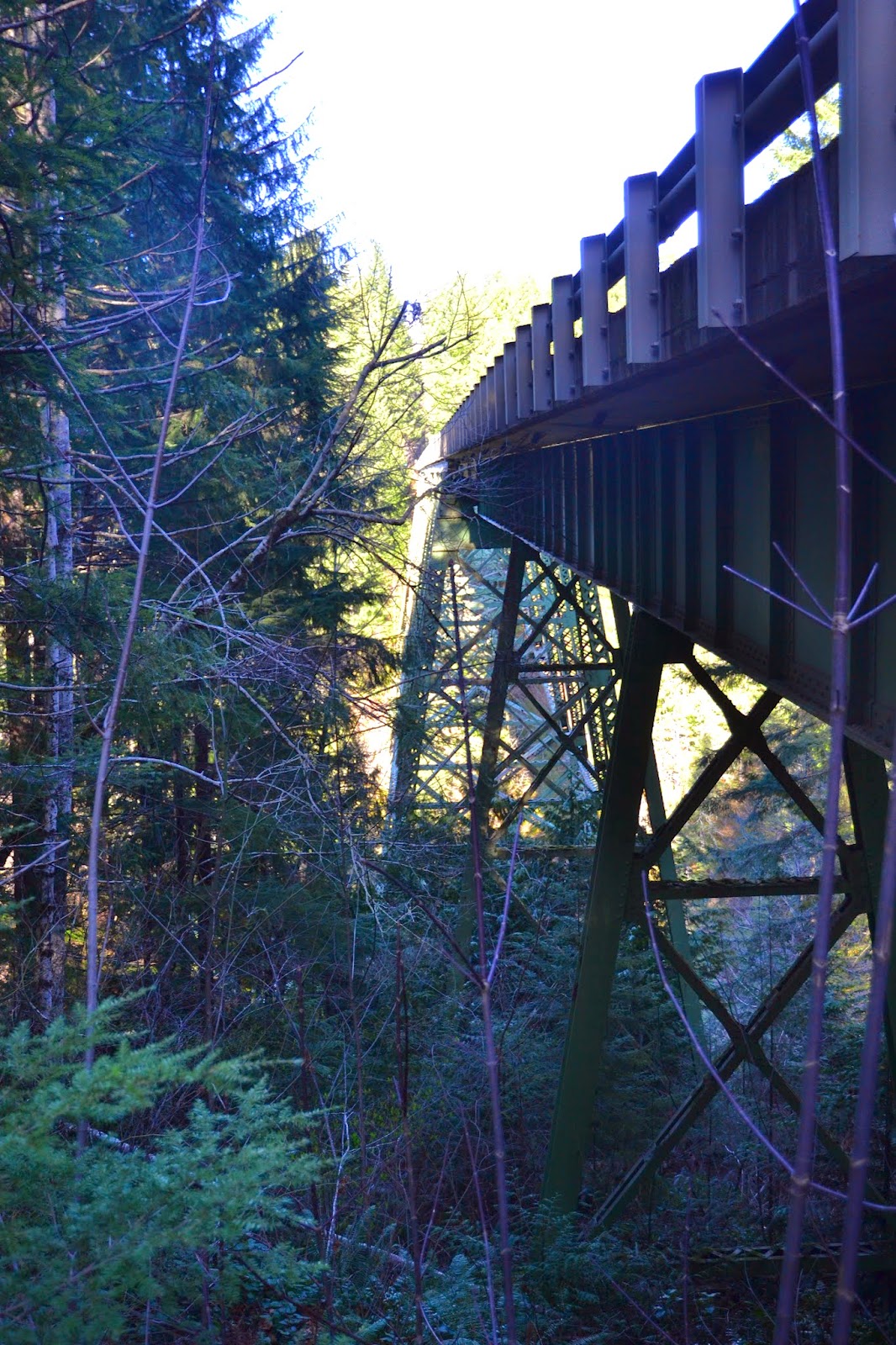 We traipsed about and I took way too many pictures to make up for last time.  But, eventually, we had to wrap it up.  Hugs were given all around and promises for future trips made.  We figured out our way home on Sarah's phone.  It required some back country travel because we couldn't get the rest of the maps to load and didn't know if this one road went through.  We drove down the dirt road and found our turning spot.  The road had a sign.  It said, Primitive road.  Large trucks traveling, CB channel 16, lights on for safety.

We turned around and decided to risk the blank spot on the map.  It led us quickly to a paved road and took us home in just over an hour.

I was so hyped to go check out the rainforest.  Man, I was jazzed.  The Olympic park is one of the biggest reasons we came here.  We have always wanted to get to the rainforest.  I could see this very blog post forming in my mind and it was excellence deep fried in wonderful and dipped in awesomesauce.

I wanted everything ready.  I get the camera batteries on the charger, made a note about what to pack in the backpack.  Do I bring the tripod?  Nah, but don't forget the zoom lens.  We already know there are eagles and such in the area.

I woke up, got the backpack and started packing.  I decided to put the camera in the backpack instead of carrying the big camera bag so we only had to carry one bag.  Don't forget the zoom lens.  We got food, we got water, we got it.  Let's go.

Packed up into the car.  It was a beautiful day.  This was way nicer than we had any right to expect in late February.  The drive north carried us through working forests in various states of regrowth and cut.  Small towns arose and disappeared looking a little worse for the wear.  The logging industry isn't what it used to be around here. After around 20 minutes, yeah, only 20 minutes, we passed the sign for the Olympic National Forest and found the old growth trees.  We turned off for the Quinault lake loop road and soon stopped at a roadside trailhead.  It was a rainforest loop trail.  0.5 miles.  This should be a good start.

I left my phone in the car, Sarah brought hers, we prodded the kids on to the trail with our handy dandy kid cattle prods and off we went.  It was only a few steps onto the trail when we ran into this huge Douglas fir tree with a little platform built around it for close up viewing and ease of climbing a slope.  I lifted the camera and...nothing.  Turn it off and back on again...nothing.

And it hit me.  I forgot the battery.

Heck, I don't even have my camera on my phone.  I suck at this.

Sarah, as usual, comes to my rescue.  She has her phone on her camera and takes pictures.  The camera on this phone is OK, but it isn't the big old trusty Nikon.  Sigh.

At least she brought something. 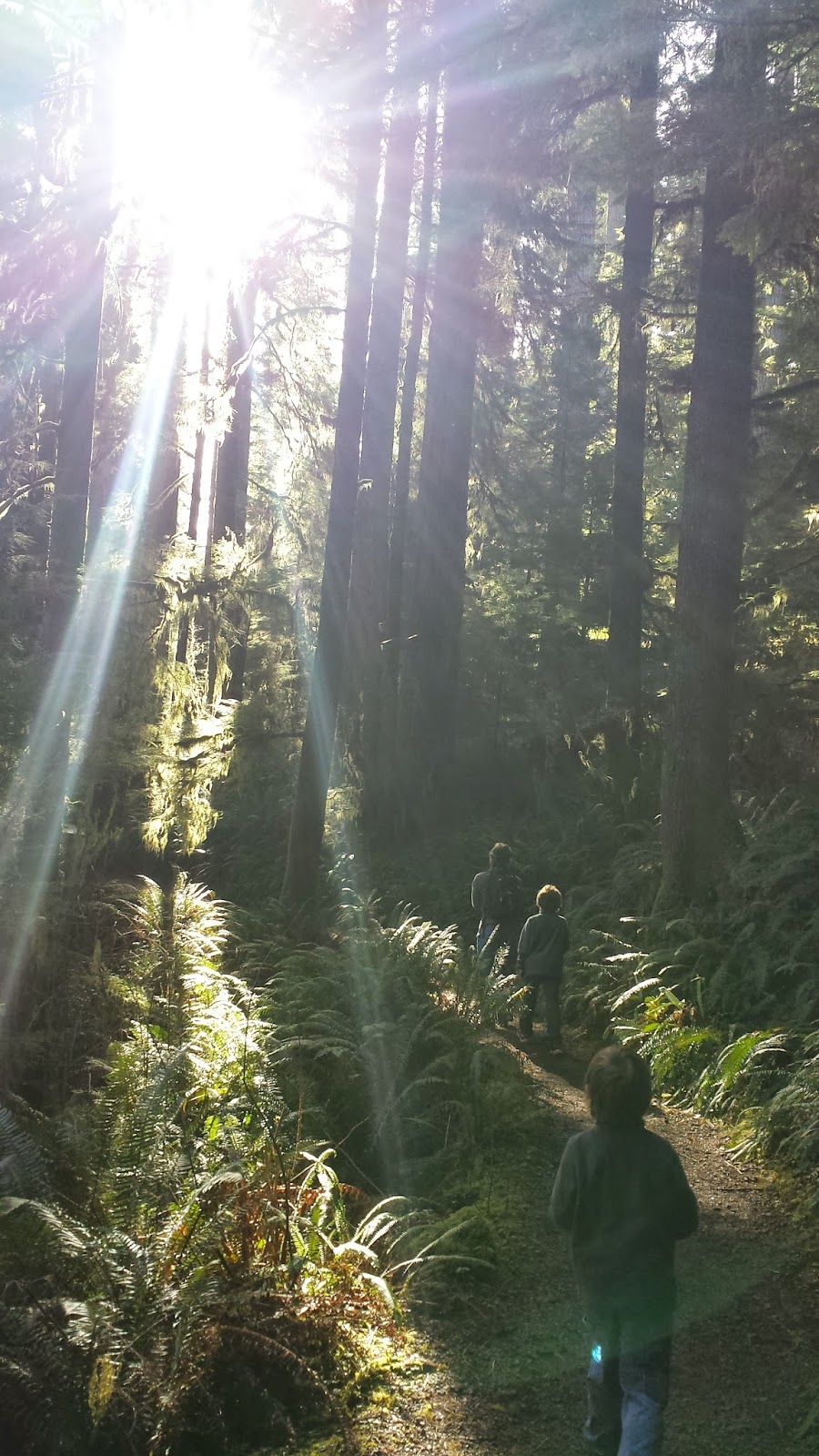 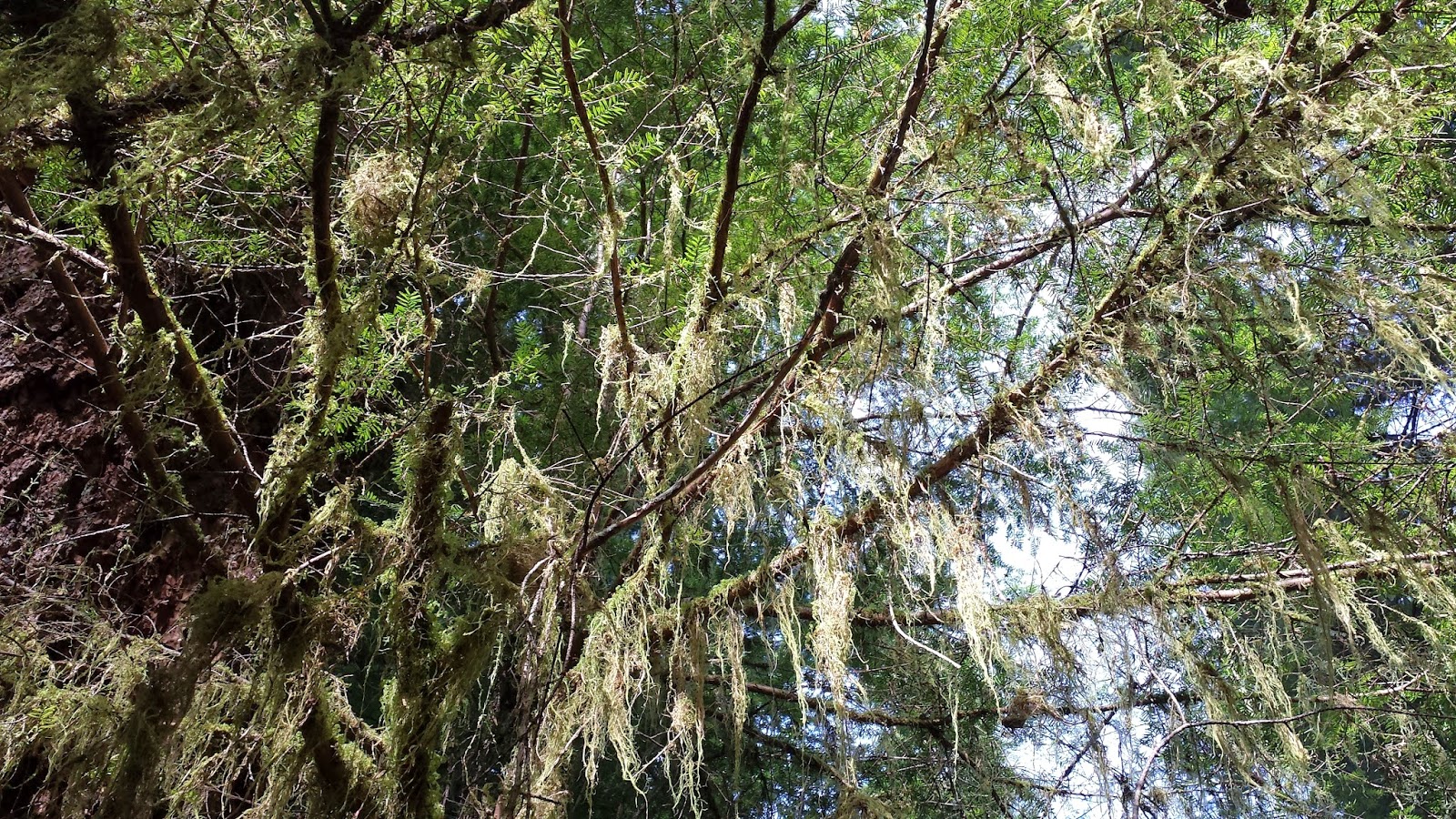 We finished the short loop and drove on a way further to a ranger station where we got maps and informative brochures and the like to better plan future excursions.  Everyone was really friendly and helpful.  Just past the station was the turnout for something we wanted to see. 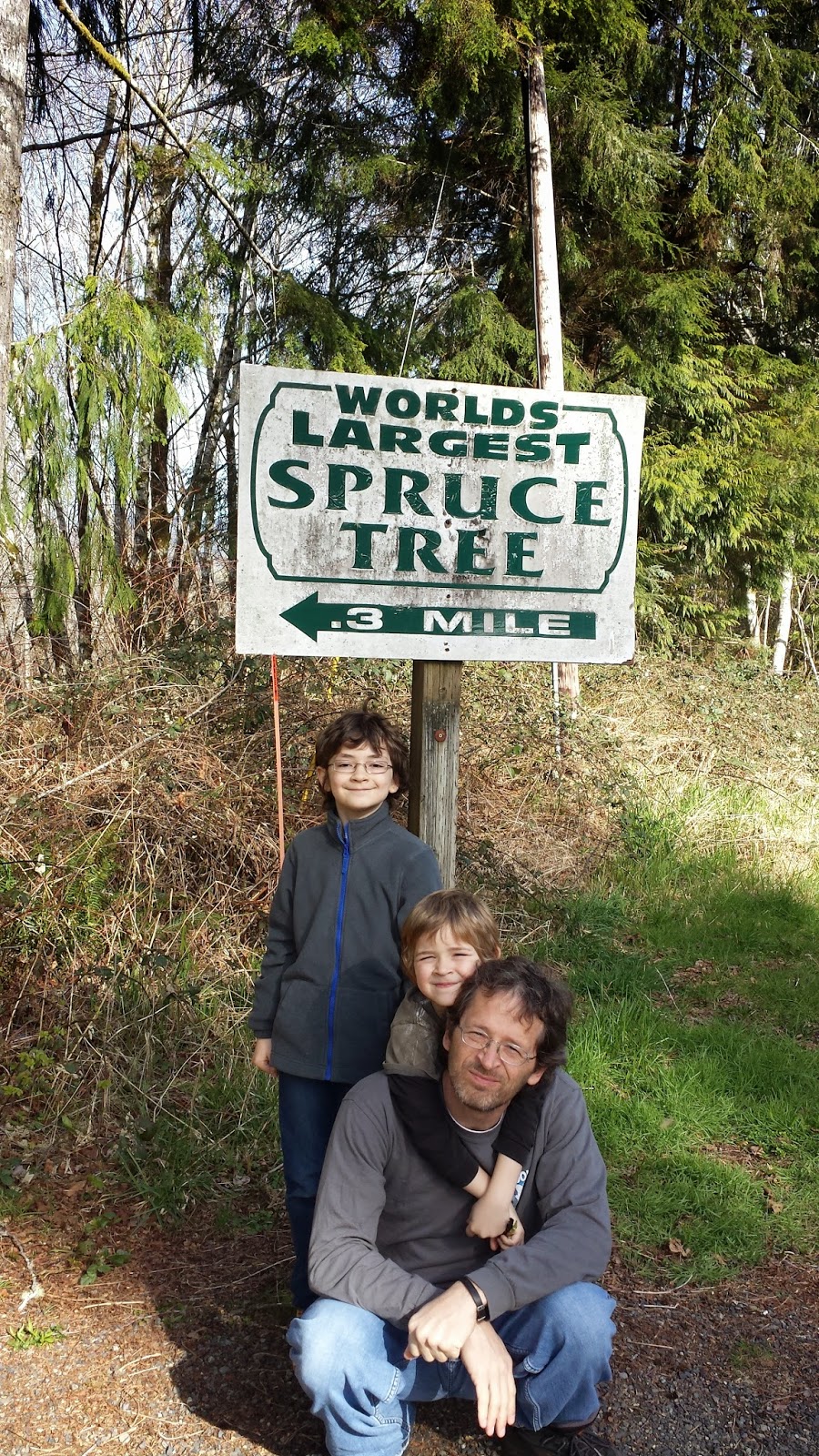 Yep, the tree hugging hippies have some superlative trees to see and embrace.  WOOHOO!  It was only a 0.3 mile walk over level ground, turn a corner and... 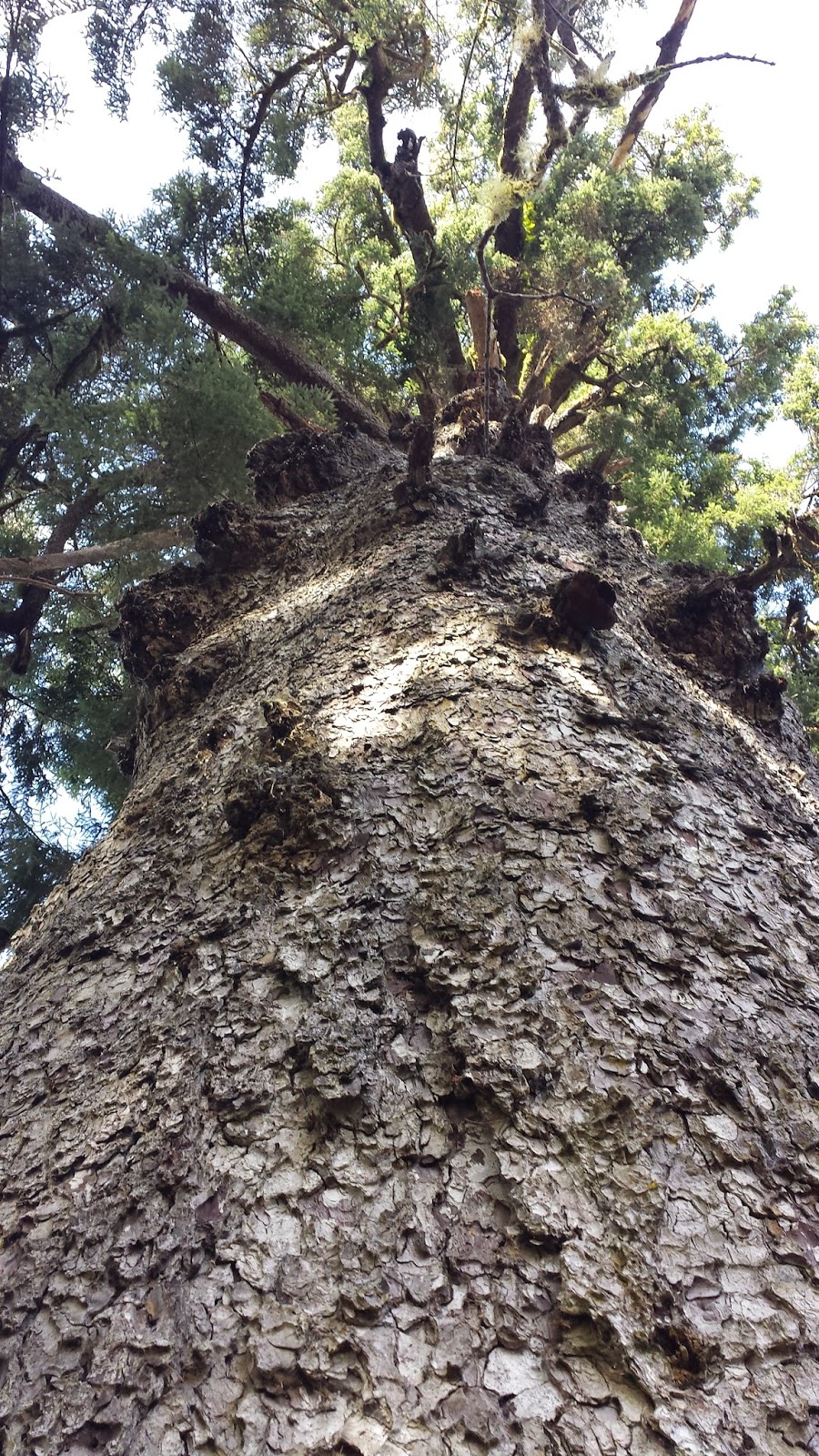 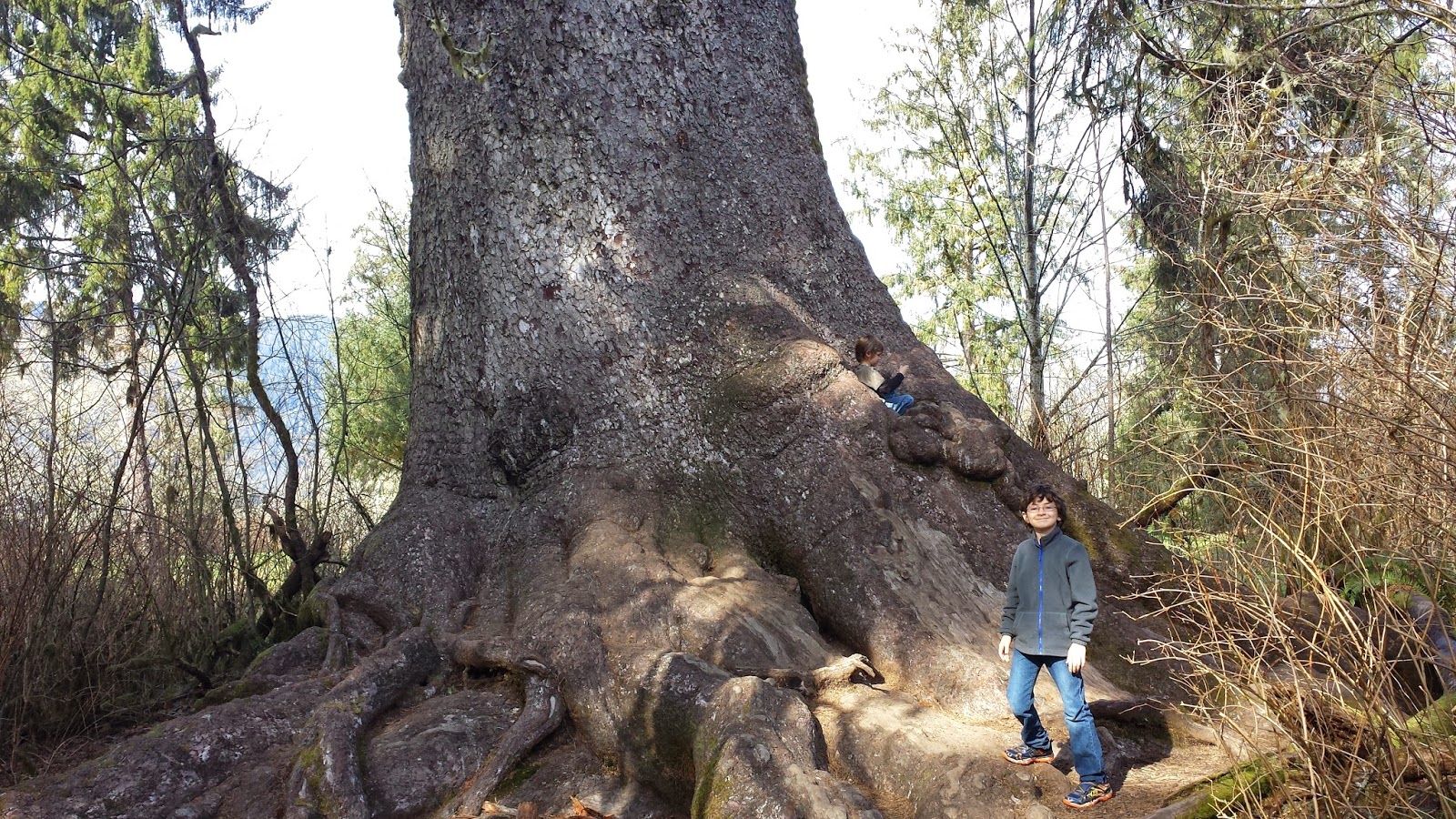 We drove on, intending to complete the loop drive.  We eventually did, but kept getting side tracked by little things like ... 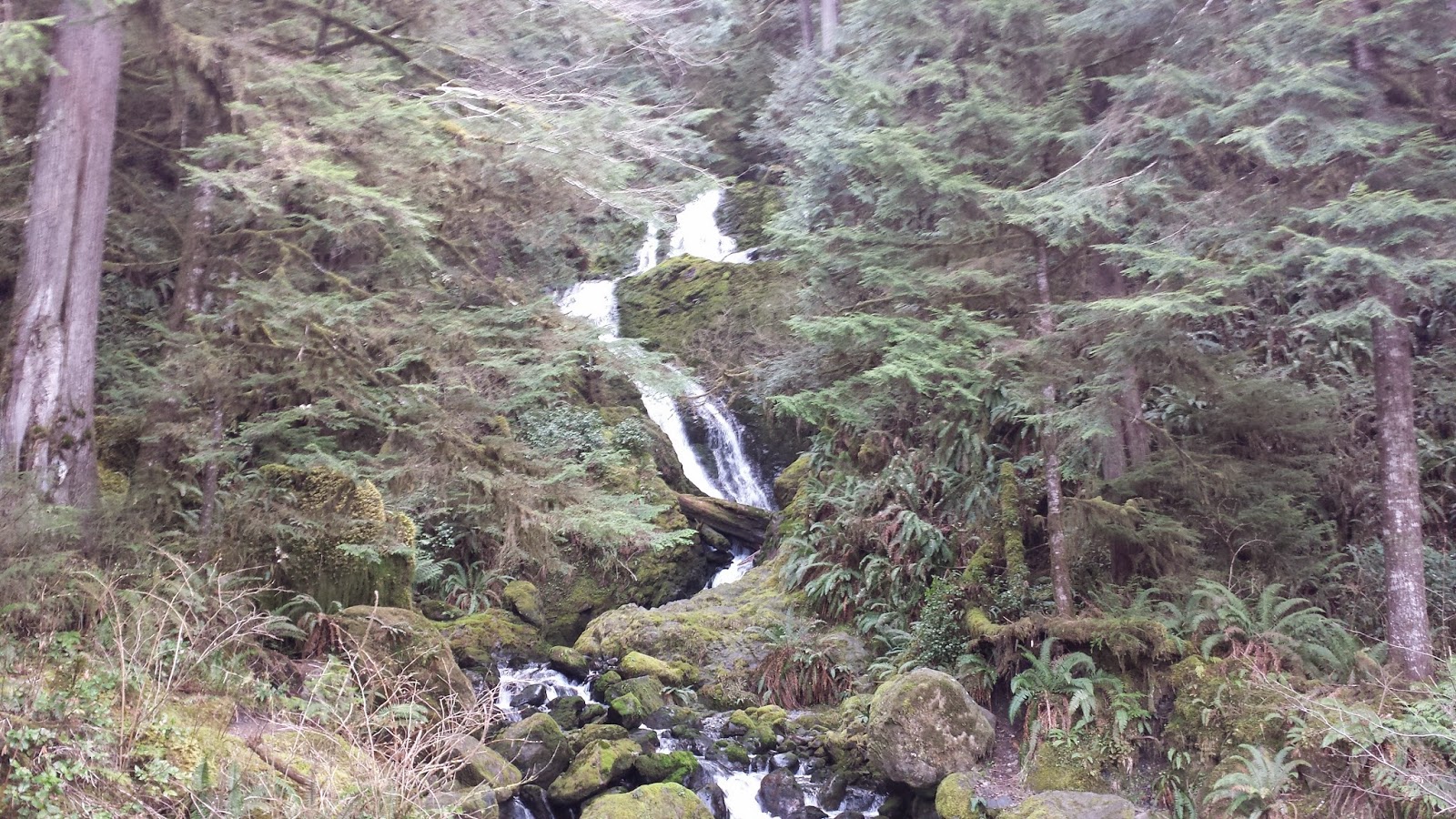 Eventually we got to the turnaround and continued back down the north shore of the lake.  The road is not paved for much of the way.  It meanders through old growth forest filled with ferns.  It broke open into a series of meadows.  I told Sarah this was prime elk territory and not two seconds later. 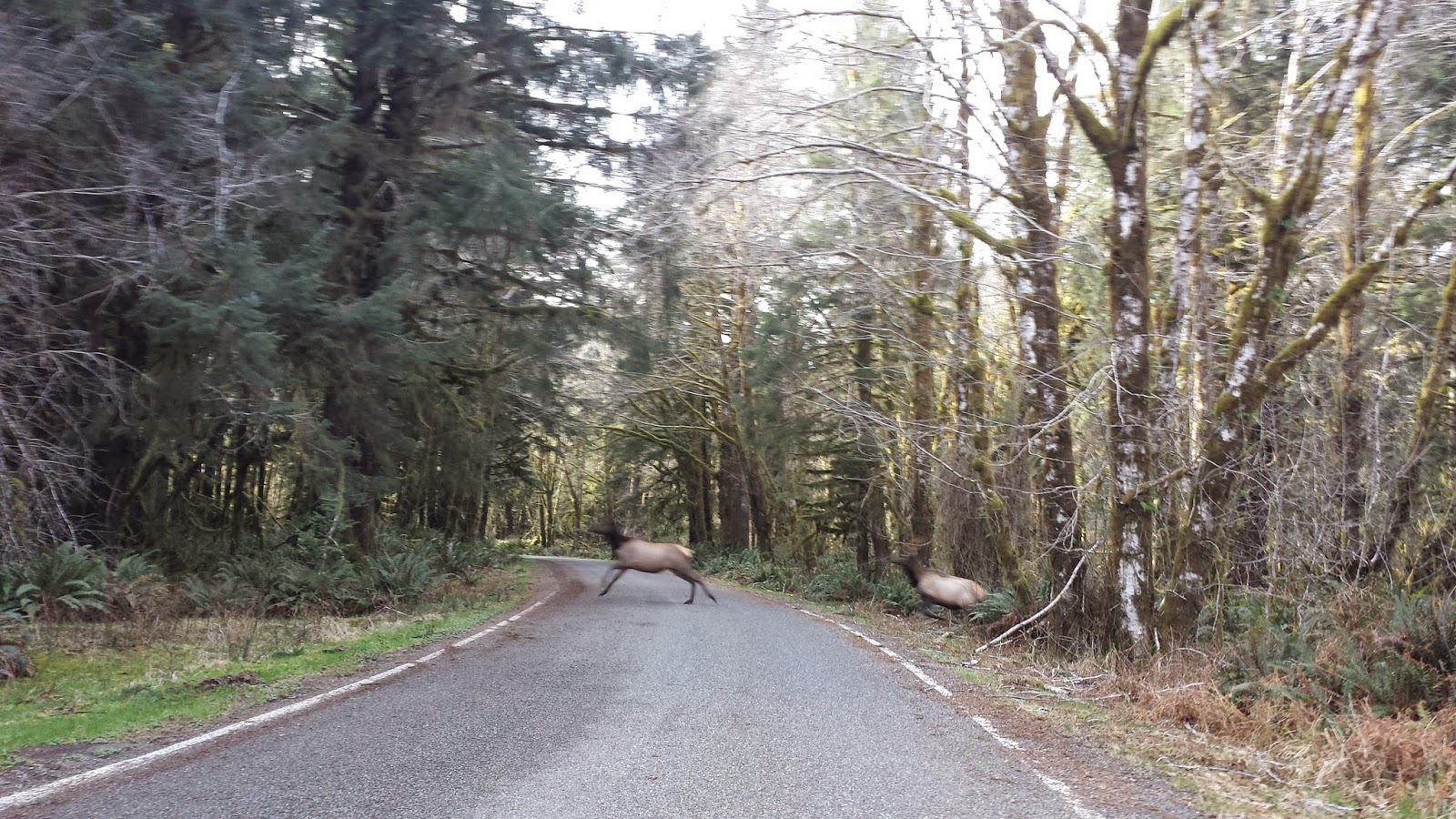 We drove on and caught a glimpse of the Quinalt river.  It looked like there was a fly fisherman in waders or something in the water.  Sarah thought she saw a bird flapping it's wings right next to him.  We stopped and took a look. 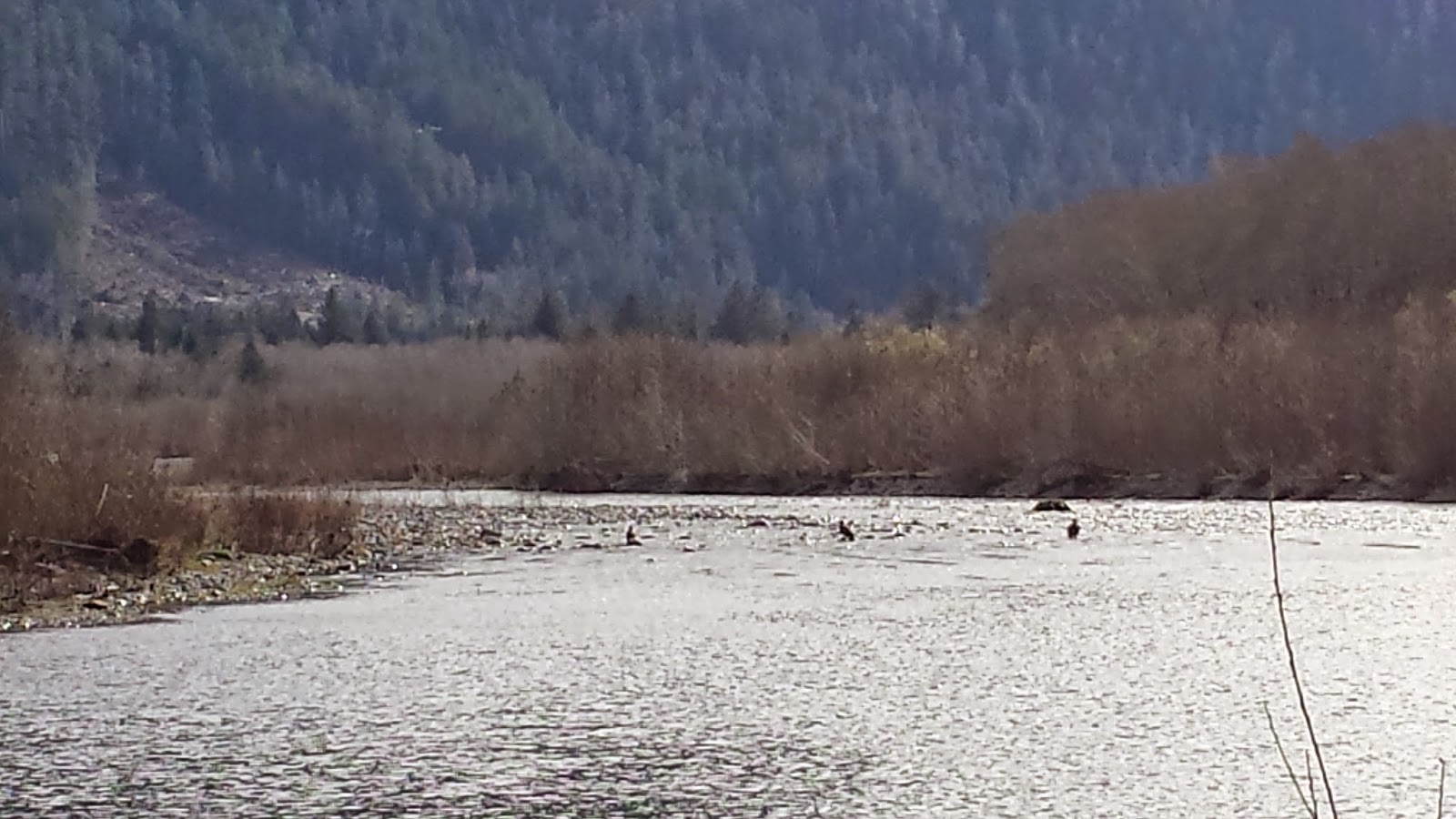 It was getting a little late and everyone was hungry.  We decided to call it a day and head home.  That meant passing the trail to yet another huge tree.  Oh well.  We will just have to go back.  And bring the camera.

And the batteries.
Posted by Adventure Nickel Farm at 9:22 PM 3 comments: