Safely arrived in Abiline. No big hiccups. As usual, the first time packing everything after three months of sitting takes longer than expected. Then when we finally stopped, there was some extra adjustment as we remembered how the slide outs where supposed to go.

Something different this time though. I don't have that excited buzz about this trip yet. We will be seeing my sister tomorrow though and that will help. Seeing Mom again after such a long time will be awesome too. OK, now I'm getting excited.

There is another Open Range here in the park. I stopped and talked to the very friendly Frank who owned it. He bought it new in 2008 though it is a 2009 model. He is very happy with it. I have nothing but good things to say about them as well. He had a blowout today on the passenger side rear most wheel. He says he wouldn't even have known if someone driving along side hadn't told him. That is reassuring.

I am trying to remember to post some pictures of how I made my heated hose for anyone that is interested in that sort of thing.

A few notes about Abiline. The Denny's off I-20 on the East side is awful. Worst restaurant I have been to in years. That's saying something. Got a drink spilled on me, every order was wrong, bathroom was filthy. Just don't go. Also, the RV park...apparently there are only two. This one is 40 feet from I-20. Yup. I can almost tell you what brand of car just drove by, except so many are driving by together. Talk about noisy. Oh well. Adventure equals discomfort.
Posted by Adventure Nickel Farm at 5:58 PM No comments:

Tonight we prepare to head out of Del Rio TX. It is unusual here in that I worked mostly with the same other nurses. And, there were usually only three staff, one charge and a triage. I got to know these people better than I usually do and I grew to really like them.

Tomorrow, we are off to Abiline. Next day in OKC then on to Springdale for the next contract. Time to see if we remember how to move this pig. 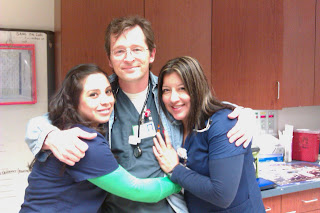 Posted by Adventure Nickel Farm at 7:37 PM No comments:

Got the step ladder rigged back up to the ladder on the back of Irv. Rigged for travel. Air pressure checked in all the tires. Getting ready for more travel. The route is not difficult, but isn't very heavily populated. That means few RV parks along the way to choose from.

I got the cold weather hose rigged partially today. Stupid kit from Amazon. It comes with heat tape for a 25 foot hose and fiberglass insulation for a 17 foot hose and plastic wrap for a 50 foot hose. Great. Tomorrow I go to home depot and get something better. Gotta keep the hose from freezing. Hopefully it will work.

Max found a dime I left on the computer desk, picked it up and appropriated it for himself today. Then, after holding on to it for a while, he handed it to me and told me, "Here... Take this and go get something you want." 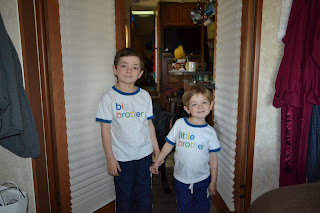 Posted by Adventure Nickel Farm at 4:39 PM No comments: