It is amazing the positive effect a good hike in a beautiful place can have on your disposition.

Missoula, you've got yourself a heck of a town here.  Pretty cool.

We didn't have to get up early or anything.  The trailhead is right there behind the campus of the school with designated parking and everything.

It was time to hike the M.

What a beautiful day.  The trail is switchbacks crowded with college students and trail runners. 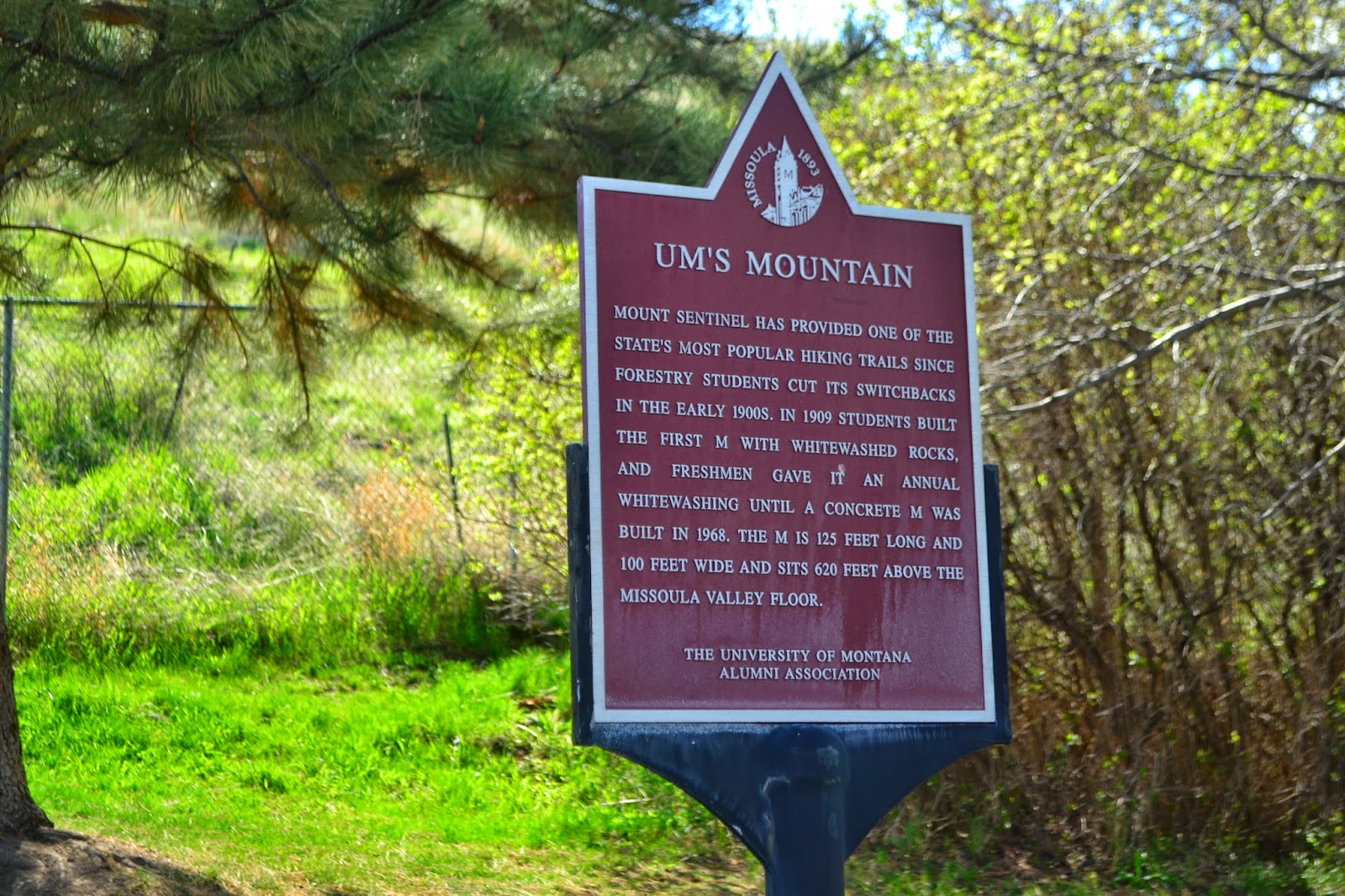 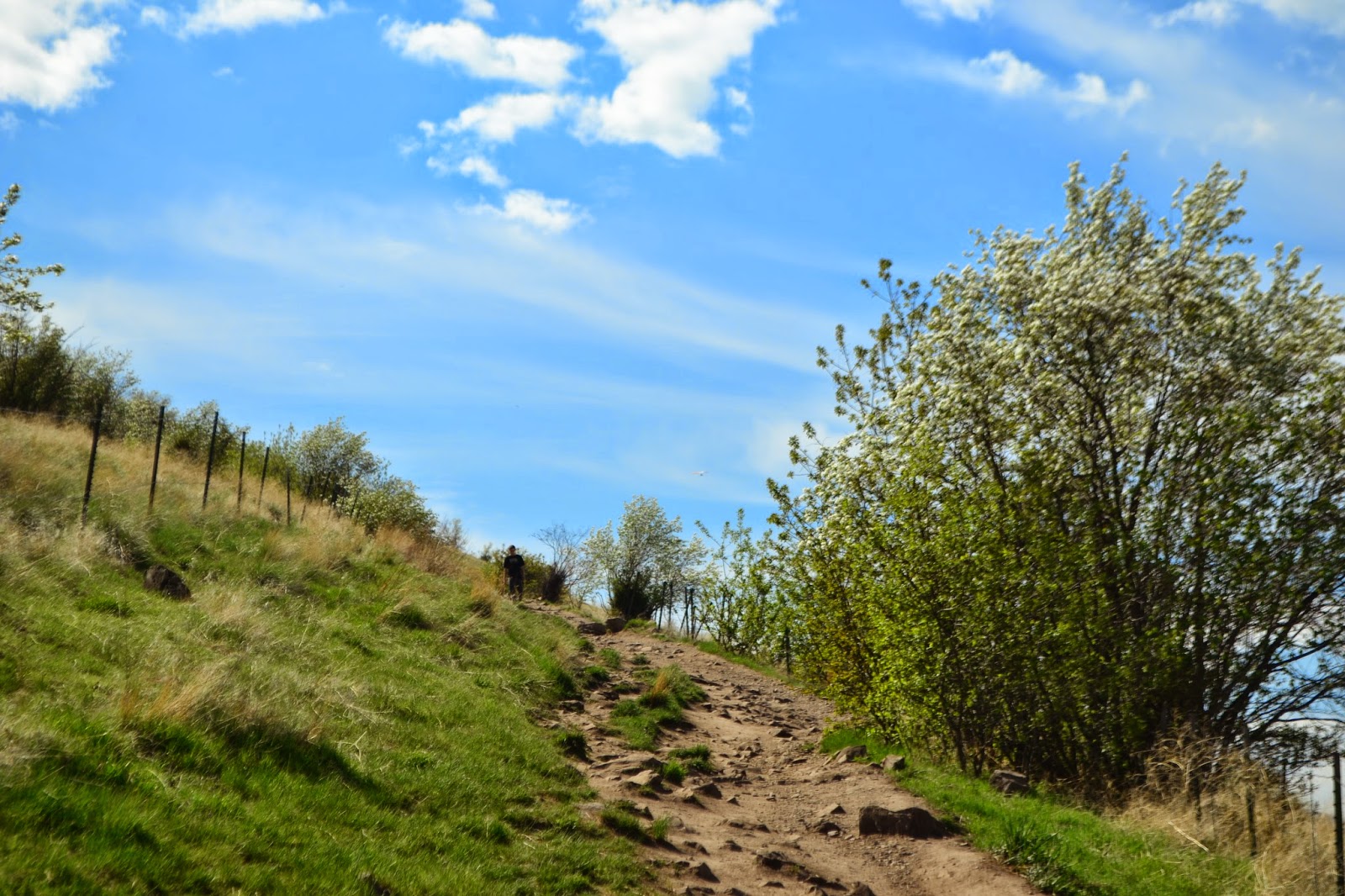 It wasn't long before we caught sight of a neat little surprise.  Unfortunately I don't have a zoom lens, so the picture isn't the best.


Then we reached the actual M.


Then something weird happened.  We convinced the kids to keep going up.  Beyond the M.

And they agreed.  Well, kind of.  Nobody cried. 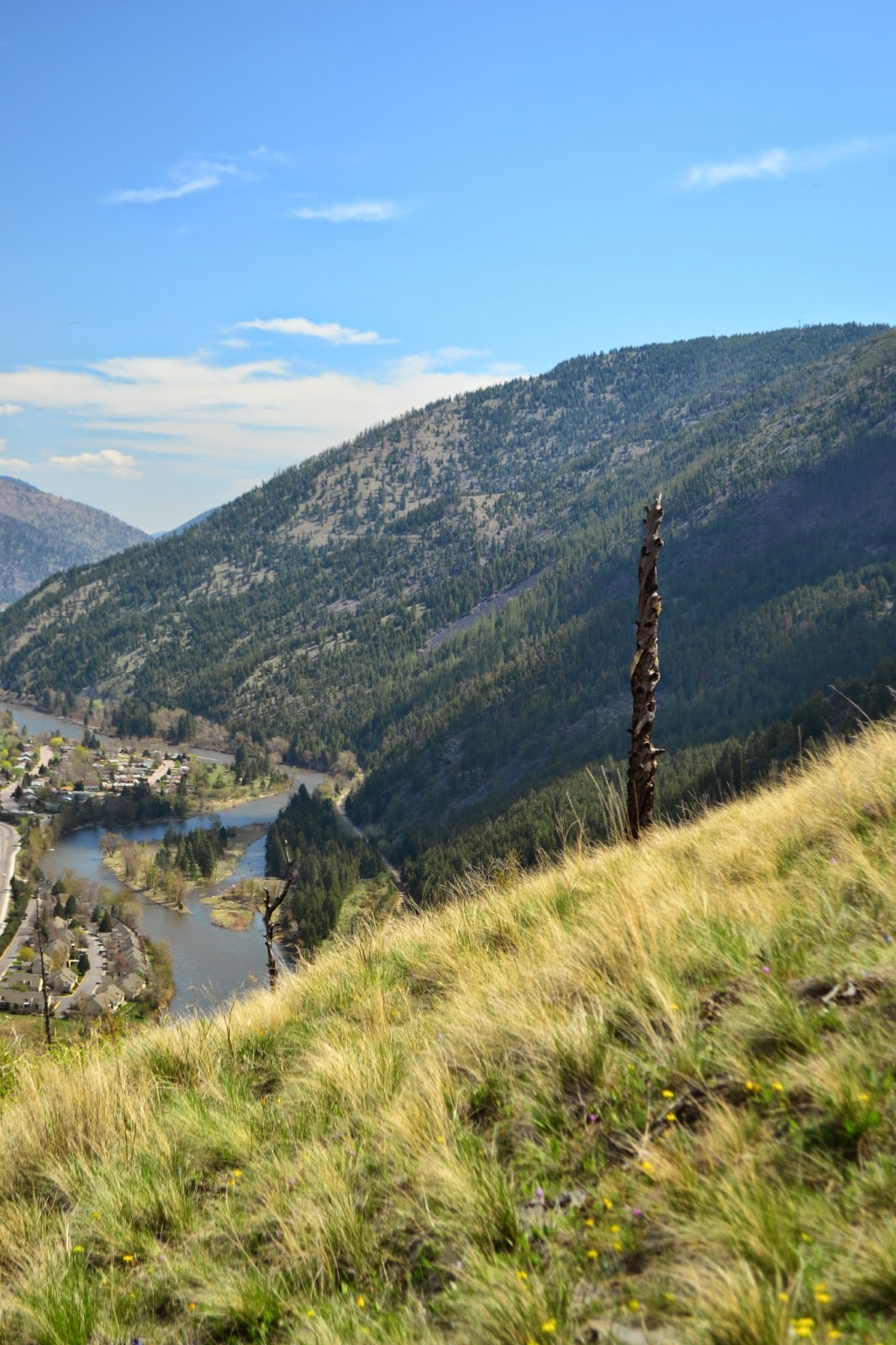 The kids weren't quite up to the summit push though.  We topped out and joined a different trail for the descent.  It was nice and certainly enough for the first hike after a winter of lethargy. 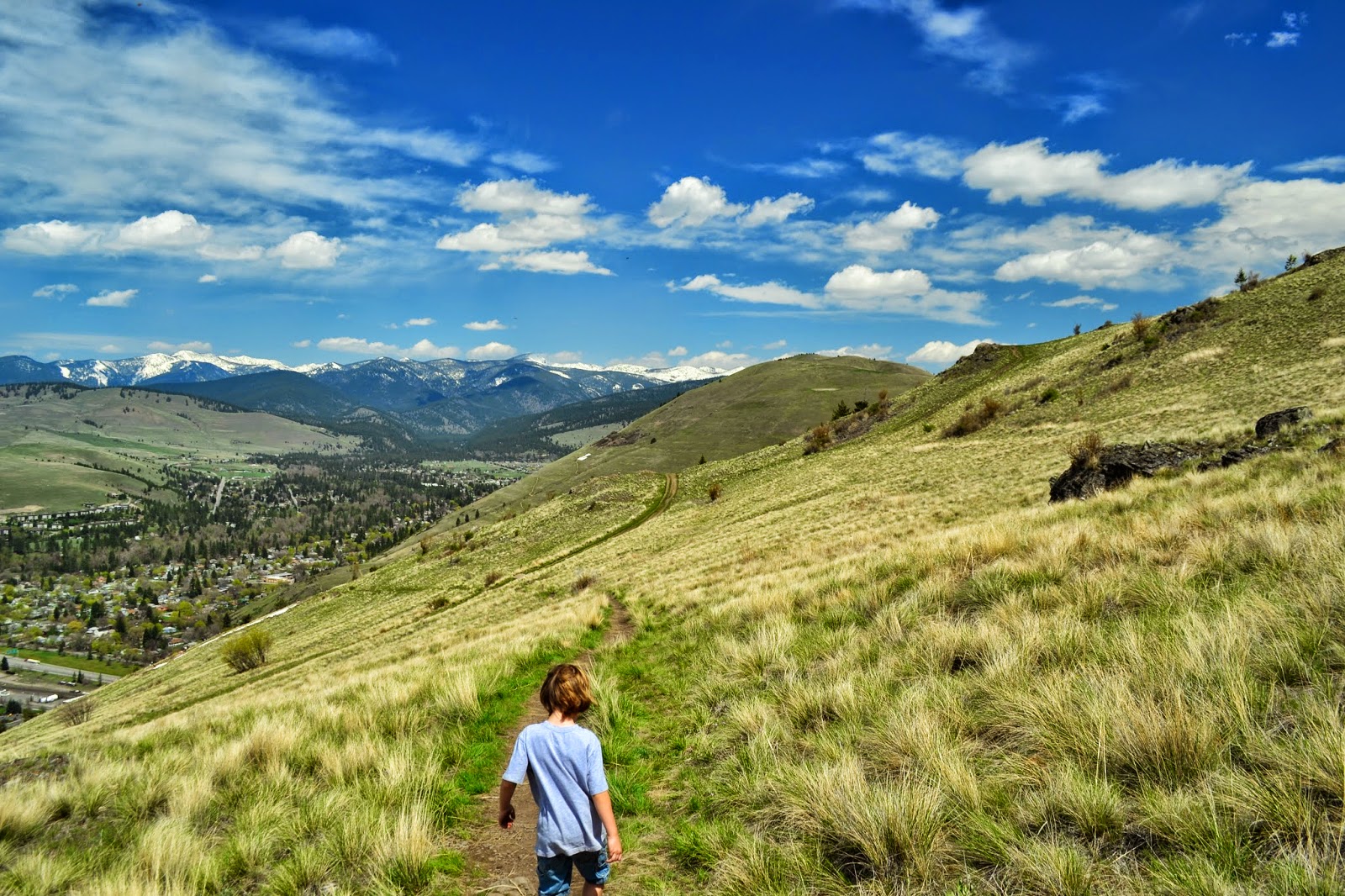 After the hike, we went for ice cream at a place USA Today rated as the best in the nation once upon a time.  Big Dipper Ice Cream.  While sitting there munching sugary deliciousness we could look back and see our accomplishment of the day.

We topped out just above where the bottom power line marks the mountain.  About 2/3 the way to the top.  Missoula has turned out to be a great little town.  I do recommend it.


Tomorrow we are on to Coeur D'Alene, ID.


Posted by Adventure Nickel Farm at 5:19 PM No comments:

Is this it?  Is this the place where Sarah and I finally shake off this funk that has clung to us since the middle of the Virginia contract?  Might just be.  Having a hike planned for tomorrow might have something to do with it too.

But I get ahead of myself.

We woke up this morning in, where in the hell were we again?  Oh yeah, Columbus, Montana, just outside of Billings.  It was cold and clear.  We knew today was going to be a long one and there would be some more challenging driving. I got out while Sarah was getting things ready inside and checked all the tires (at Sarah's urging) and checked my temporary repair of the wind damage on IRV.  I don't have any pictures of the repairs at the moment.  It is JB weld and gorilla tape.  I am just hoping it is strong enough to finish the trip and I can try to find something a little more permanent.


The kids found some way to occupy themselves while keeping out of our hair.


Then we hit the road.  Today was the second longest of the trip and also the day we crossed the continental divide.  So you know what that means.


There was some pretty scenery though. 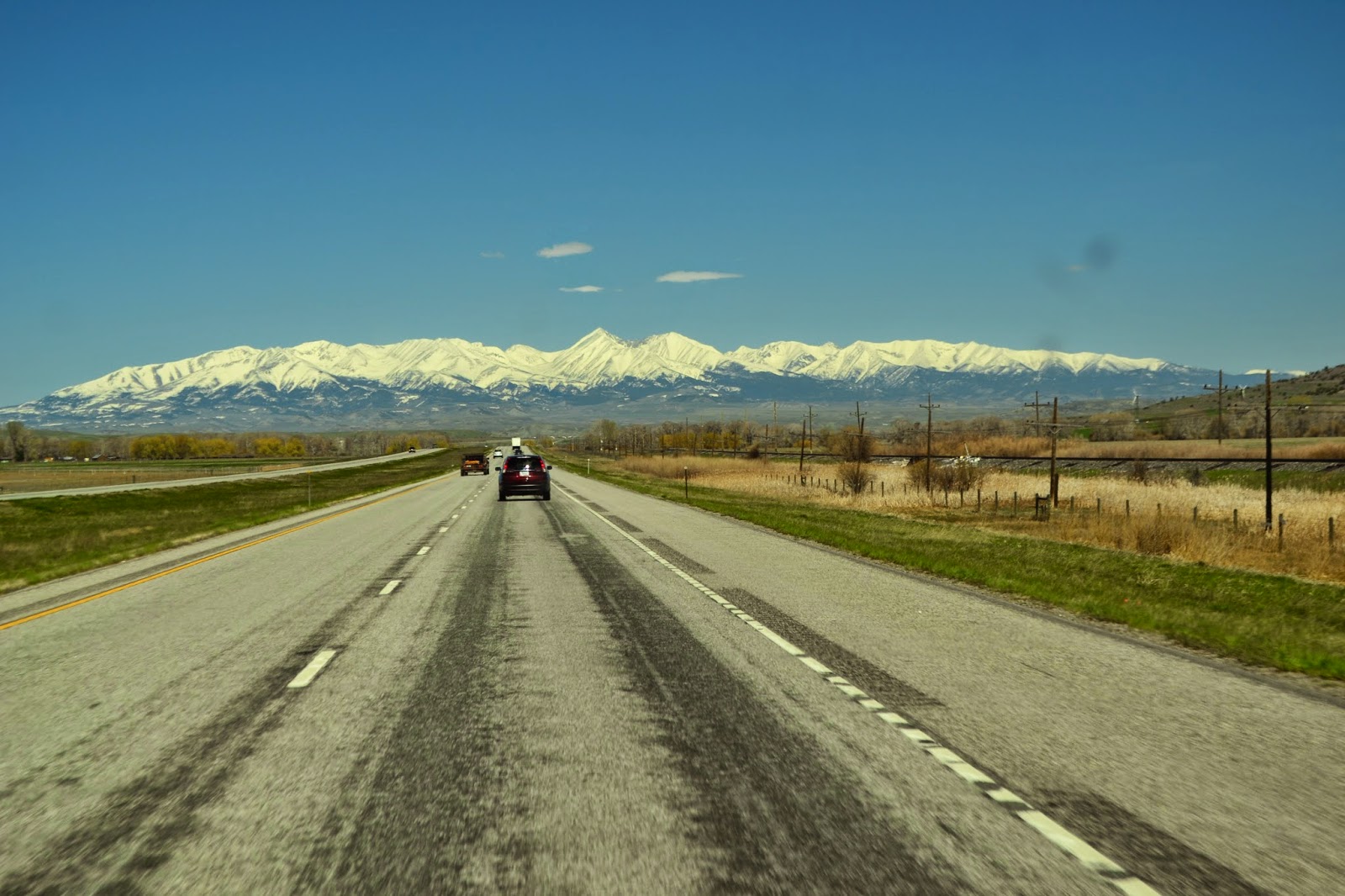 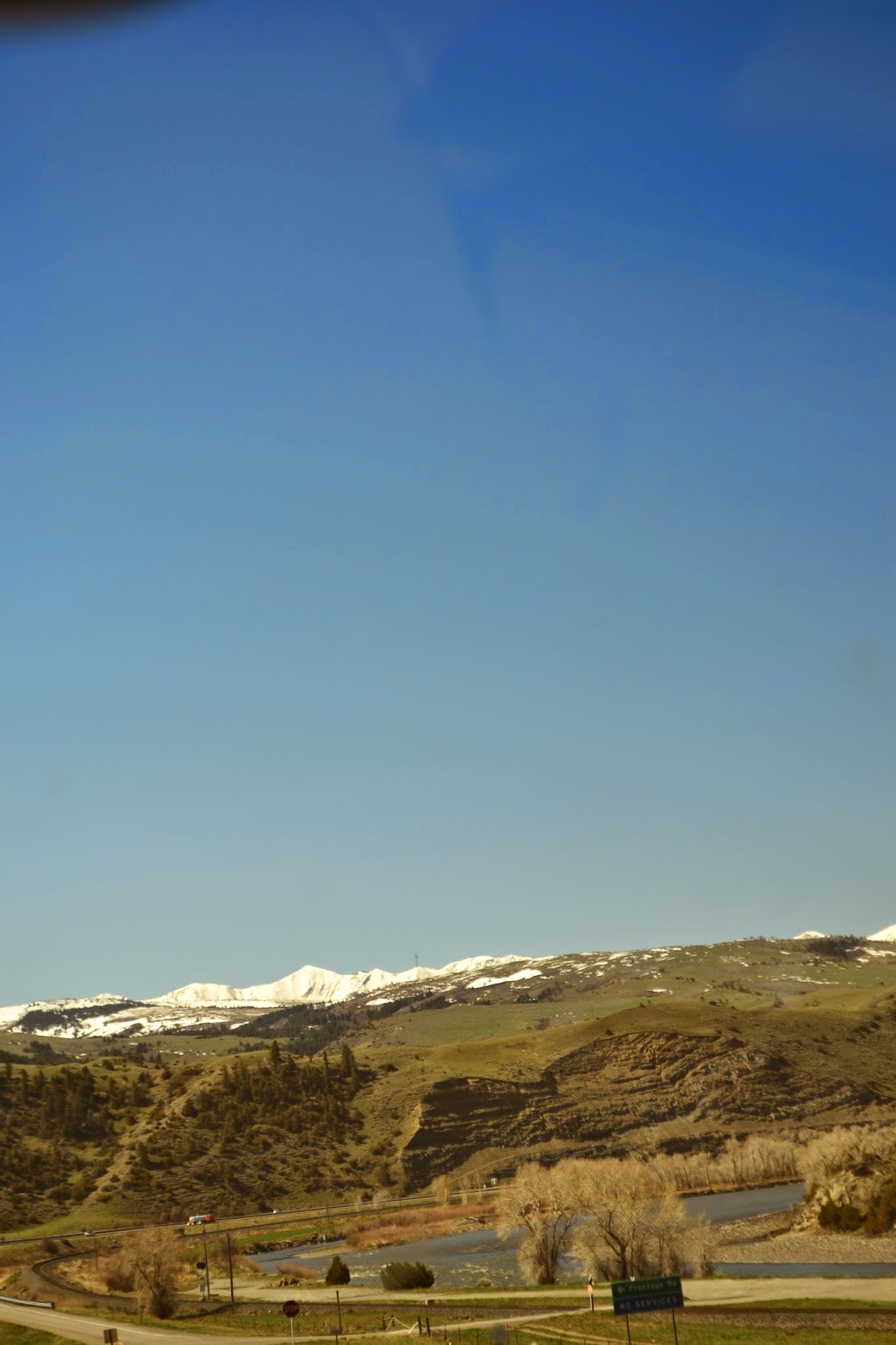 Then we arrived in Missoula.  It is pretty here.  WE went downtown  to get something to eat.  After a long day of driving, we didn't feel like cooking and doing dishes.  We found a nice little Mexican restaurant called La Cazadores which had a famous local beer (Cold Smoke Scotch Ale...excellent) on tap.  There just happened to be a little festival or event of some sort going on with a live band nearby.  We watched for a moment and then saw some other people gathered up on a ledge.  We went to see what they were doing.


So we have a hike planned tomorrow and some more pictures to come from Missoula.

First, we haven't slept well in days.  The constant 35 + MPH winds against the RV give the feeling of a ship on the rocks.  Each gust and wave of wind shakes the place and causes billowing of the slide toppers.  You can just feel damage being done.  And this morning, we woke up and checked.  Sure enough, the slide topper over the living room is growing ragged edges and one side split away from the RV totally.  And, if that weren't enough, it appears the sail action of the topper pulled the slide in enough that one of the cables used to move the slide in and out was jostled out of position and was hanging down and banging against the side of the RV.

I went in to Gillette and bought some heavy duty tape and tried to repair the topper as best I could in driving winds and snow.  We almost bailed.  We really did.  We thought hard about packing up and driving west until the winds slowed down.  But in the end, we didn't because we have already come so far.  Oh yeah, and it didn't look like we could drive out much faster than it was supposed to pass anyway.

So, we drove out to Devils Tower.  In a snow storm.


As we got closer and closer we kept seeing signs about Devils Tower view and lookout and could see nothing.  The kids decided it didn't actually exist.  We were just making it all up. 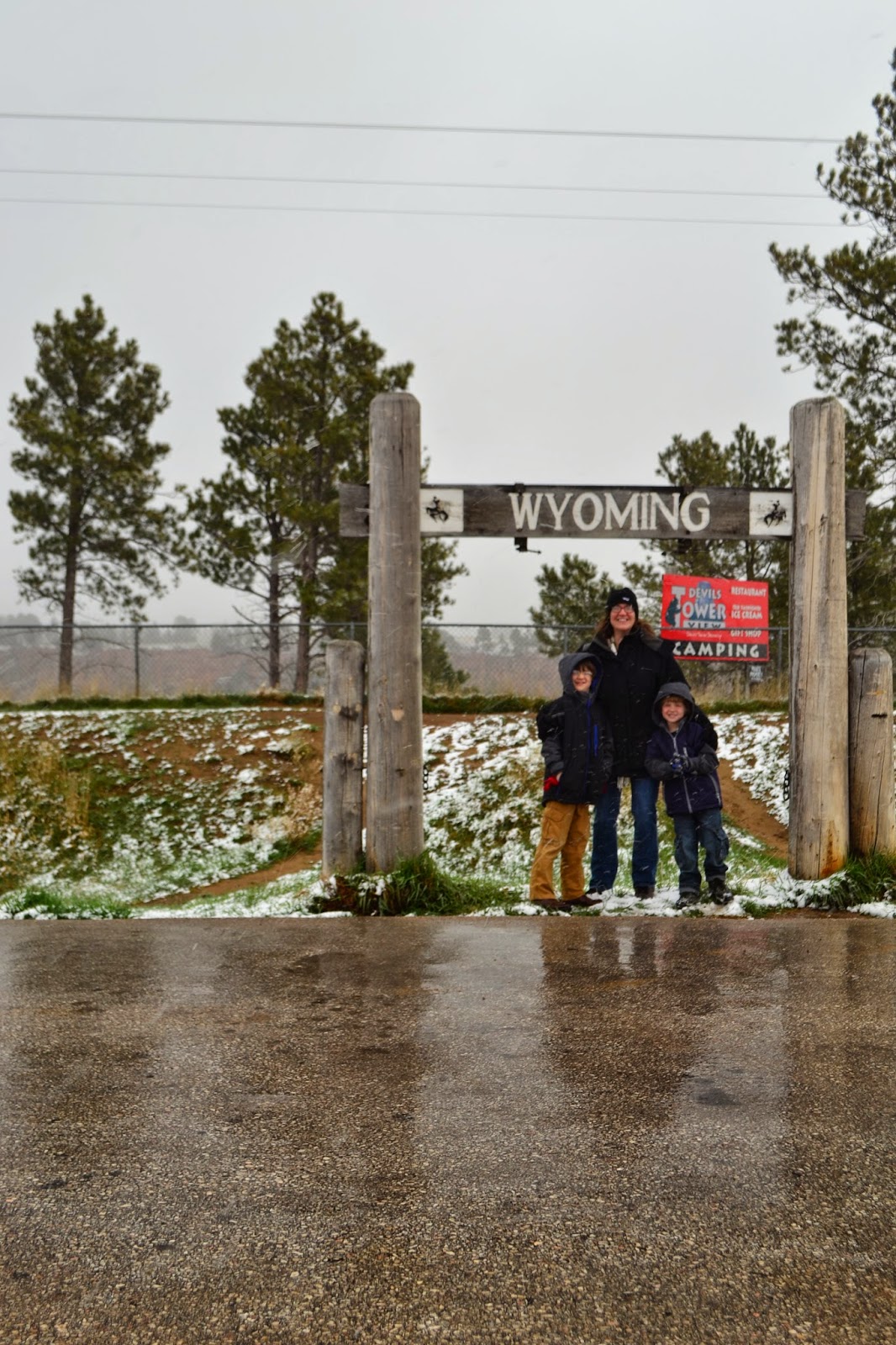 OK, so it turns out, in the above picture, that the view was across the street in the other direction.  But hey, we couldn't tell.

Eventually we saw it coalesce from the misty surrounding. 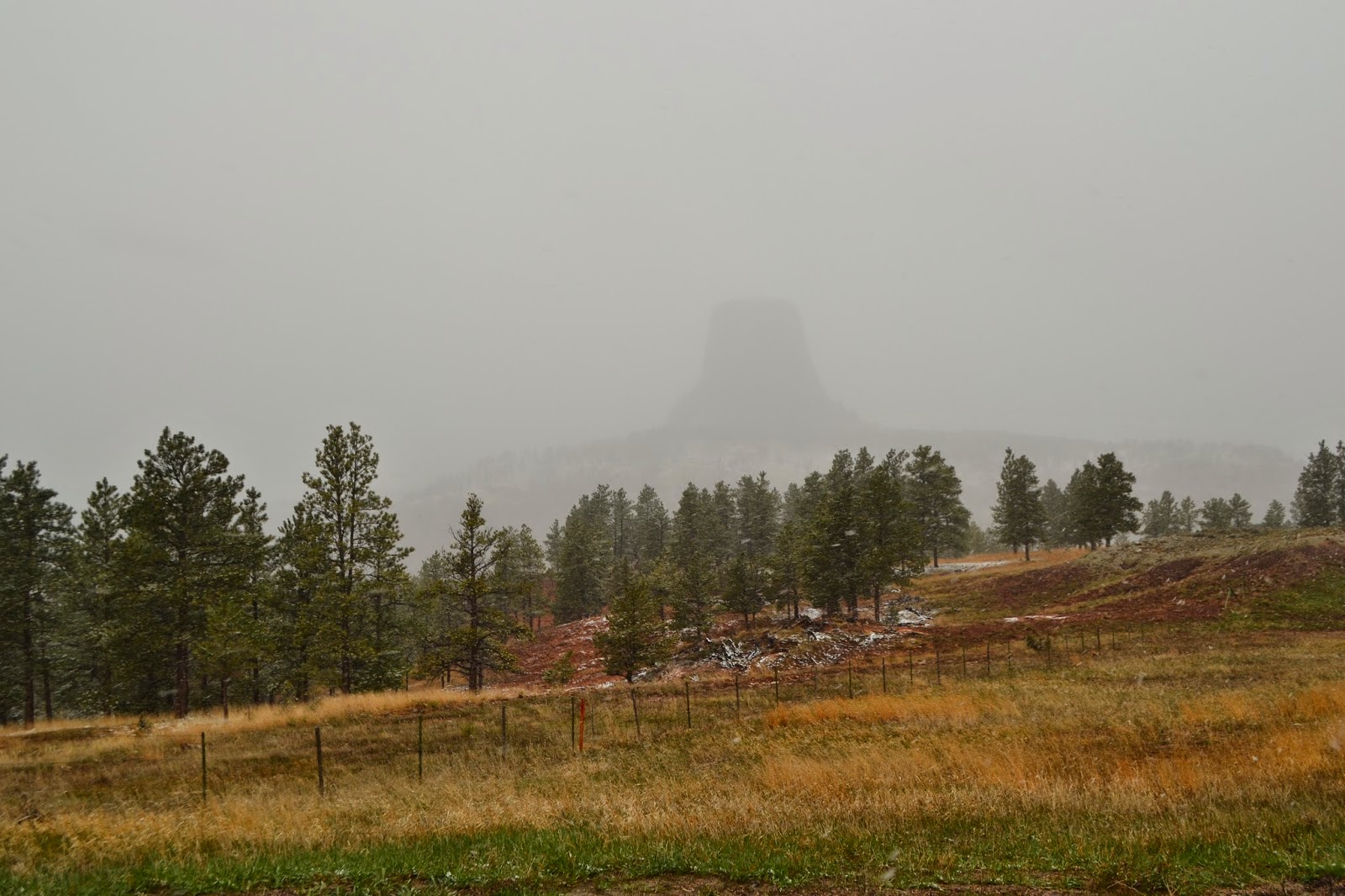 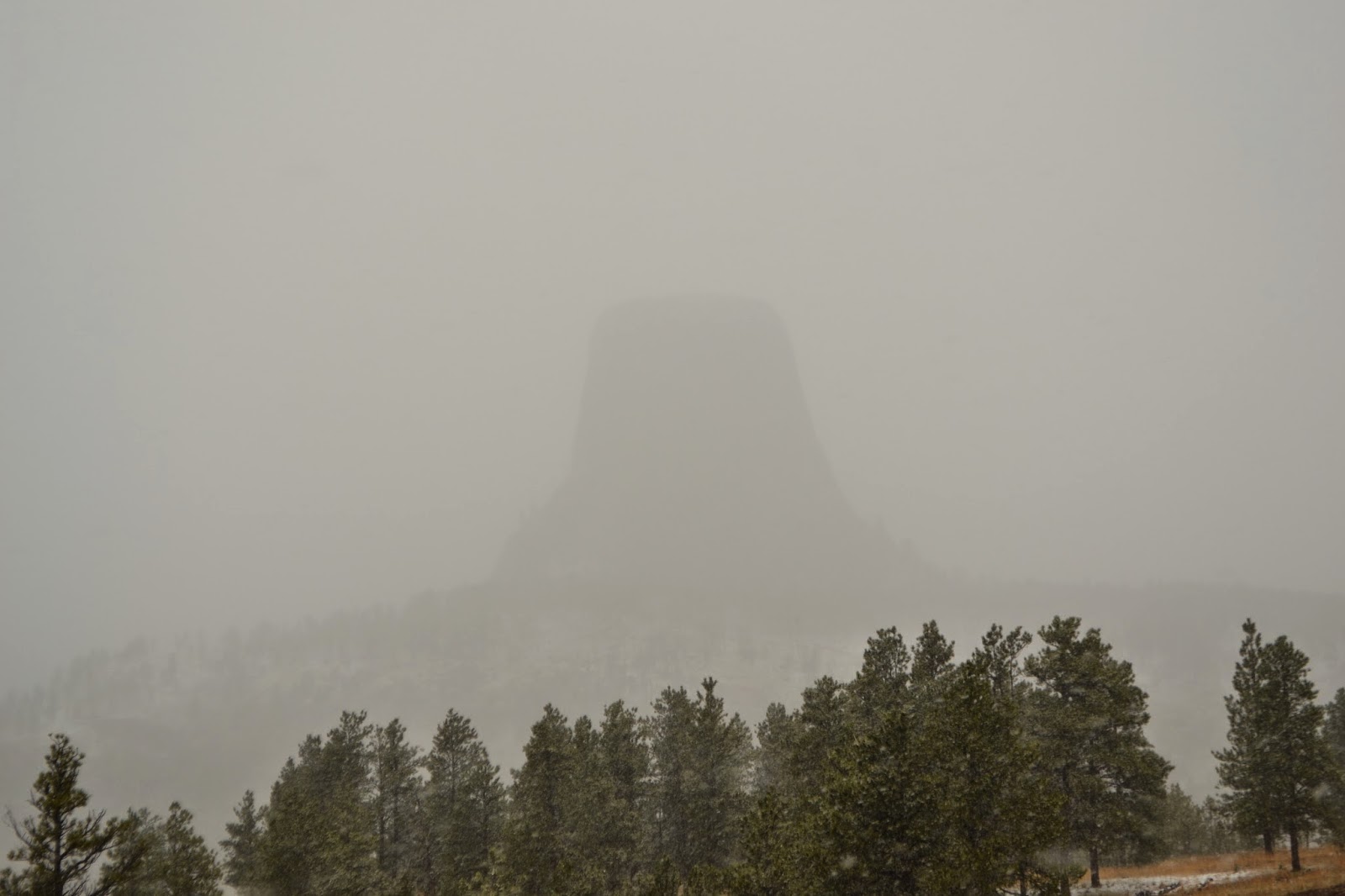 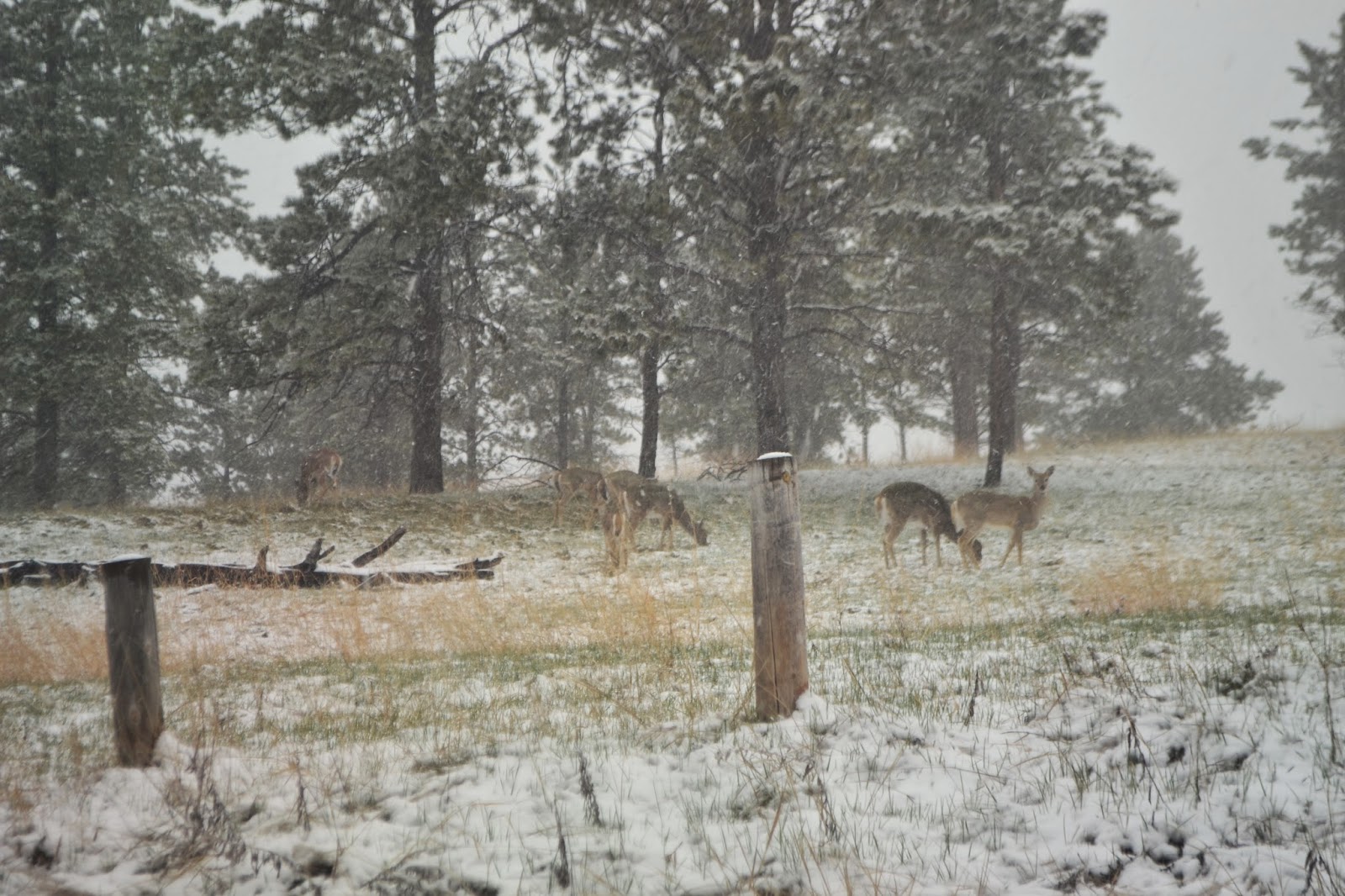 The view from the visitor's center was pretty cool.


Inside the visitor's center, we were treated to the standard set of informational displays and gift shop.  The boys worked on their junior ranger workbooks and eventually won their badges.  They are working on a pretty good set.

Then it was time for a hike around the base of the tower.  1.3 miles in the snow.  The kids even loved it. 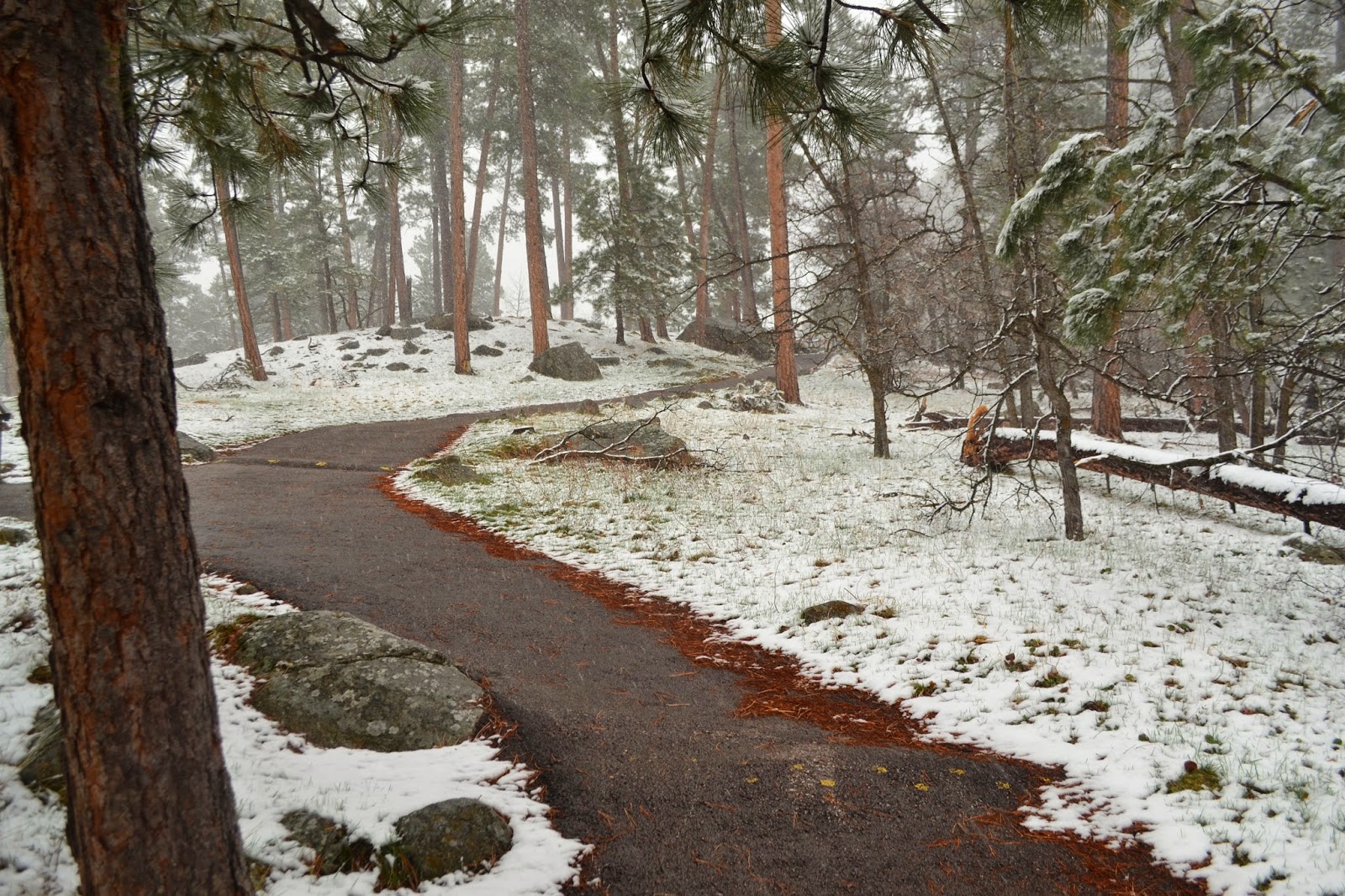 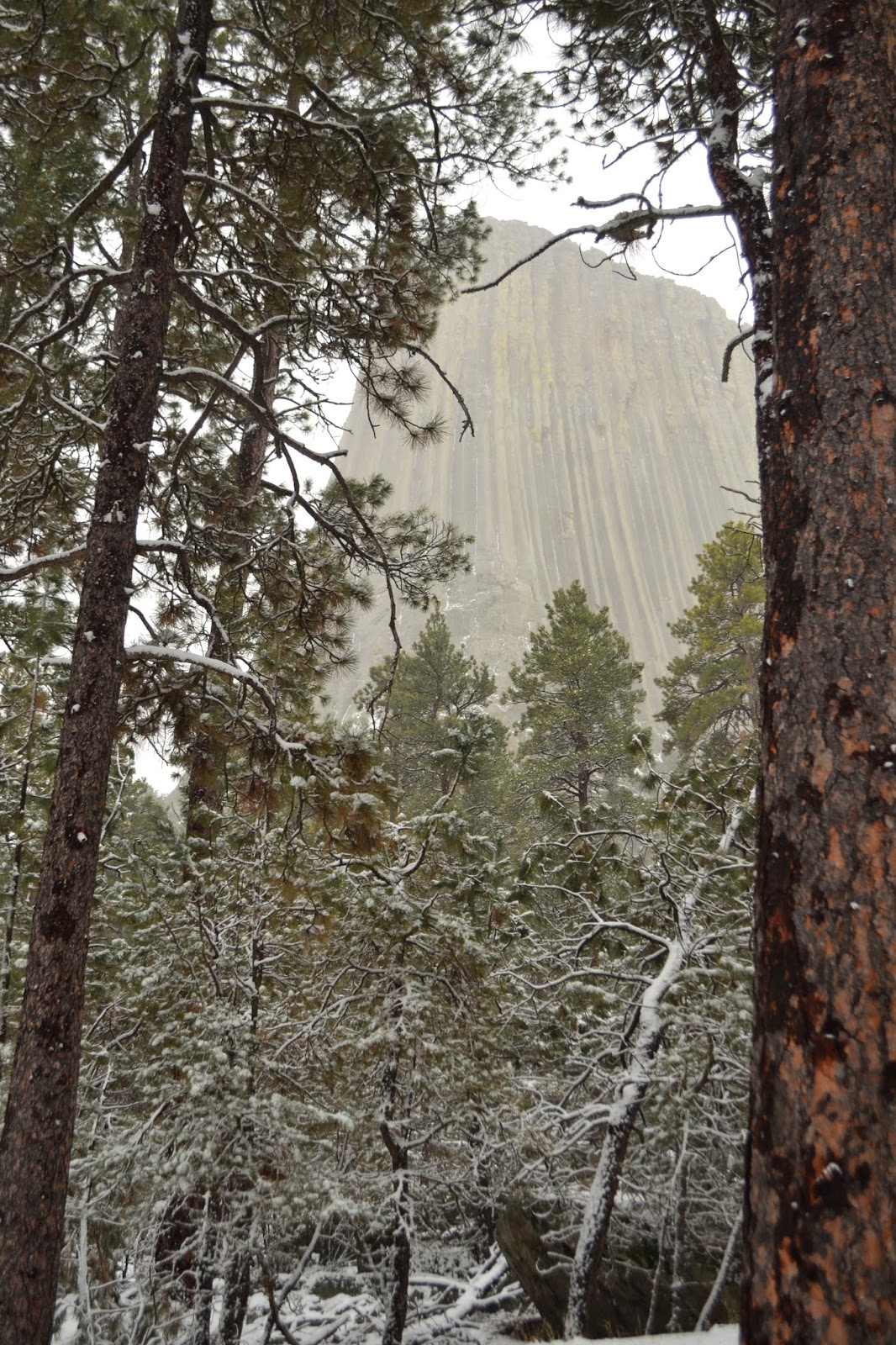 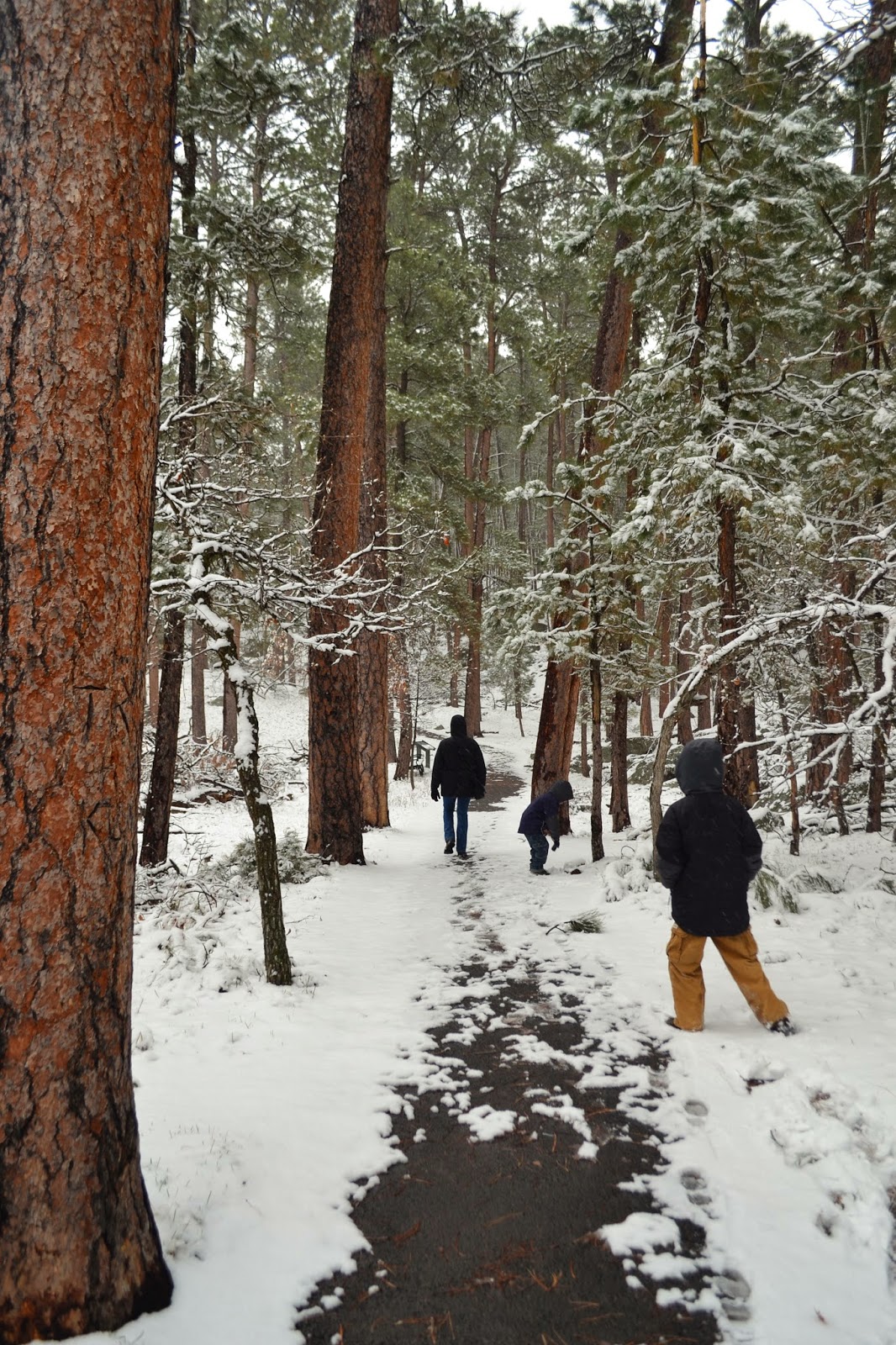 The signs of spring were there, just covered in some snow.  It made for a pretty hike and some scenery that I don't think many people get of this place.  We saw about 6 other people here. 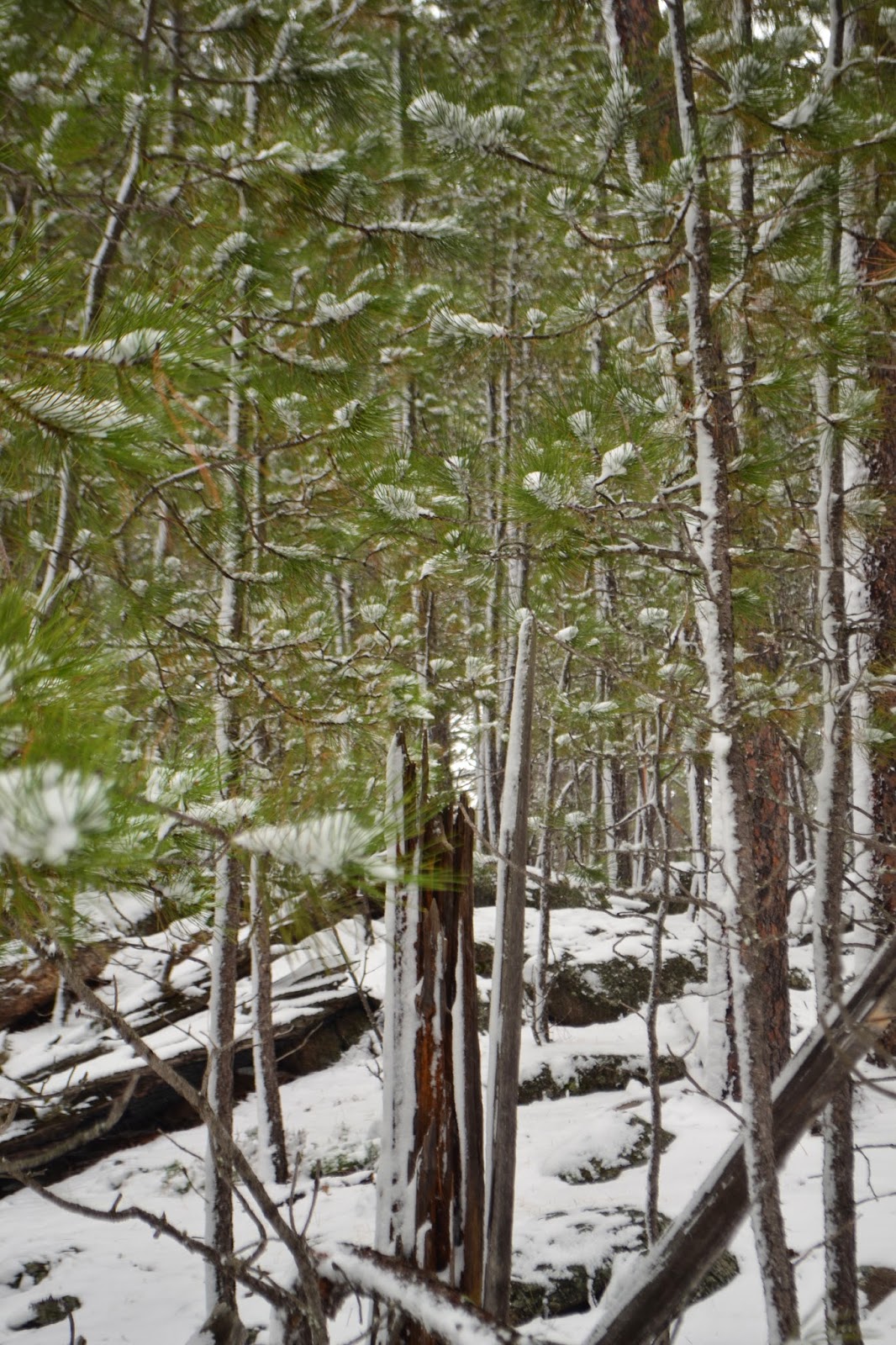 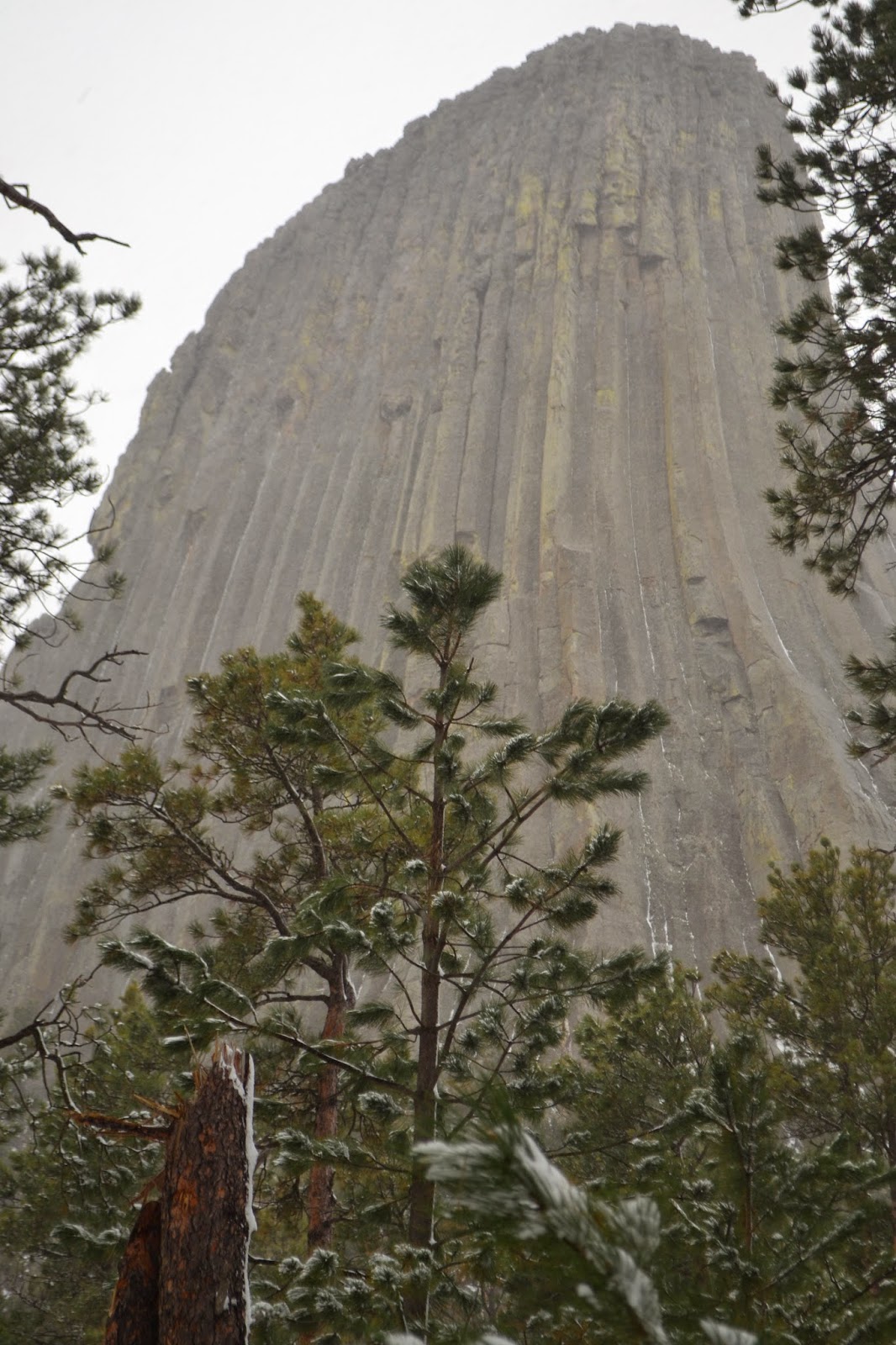 Sarah was trying to get some pictures too. 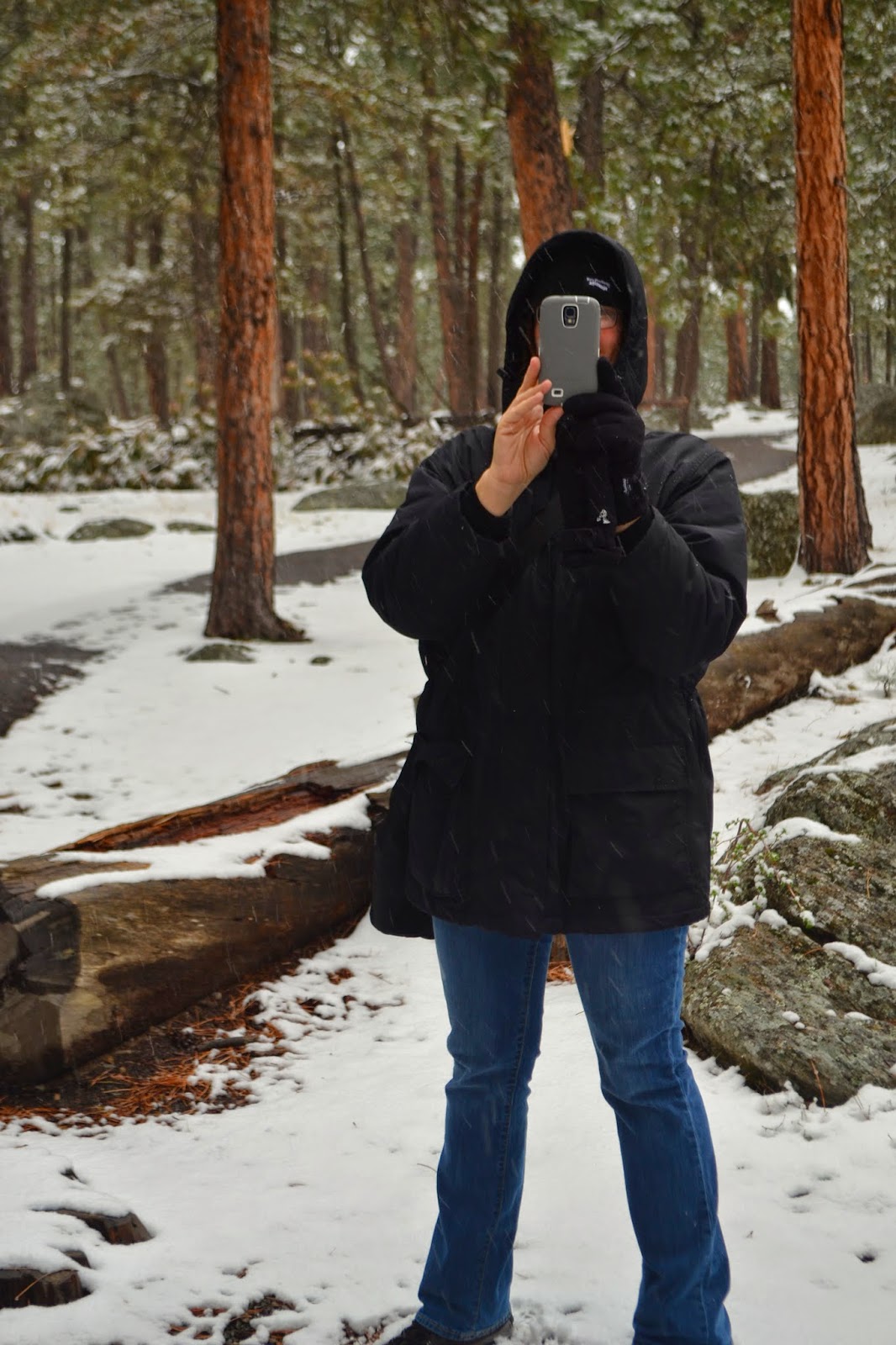 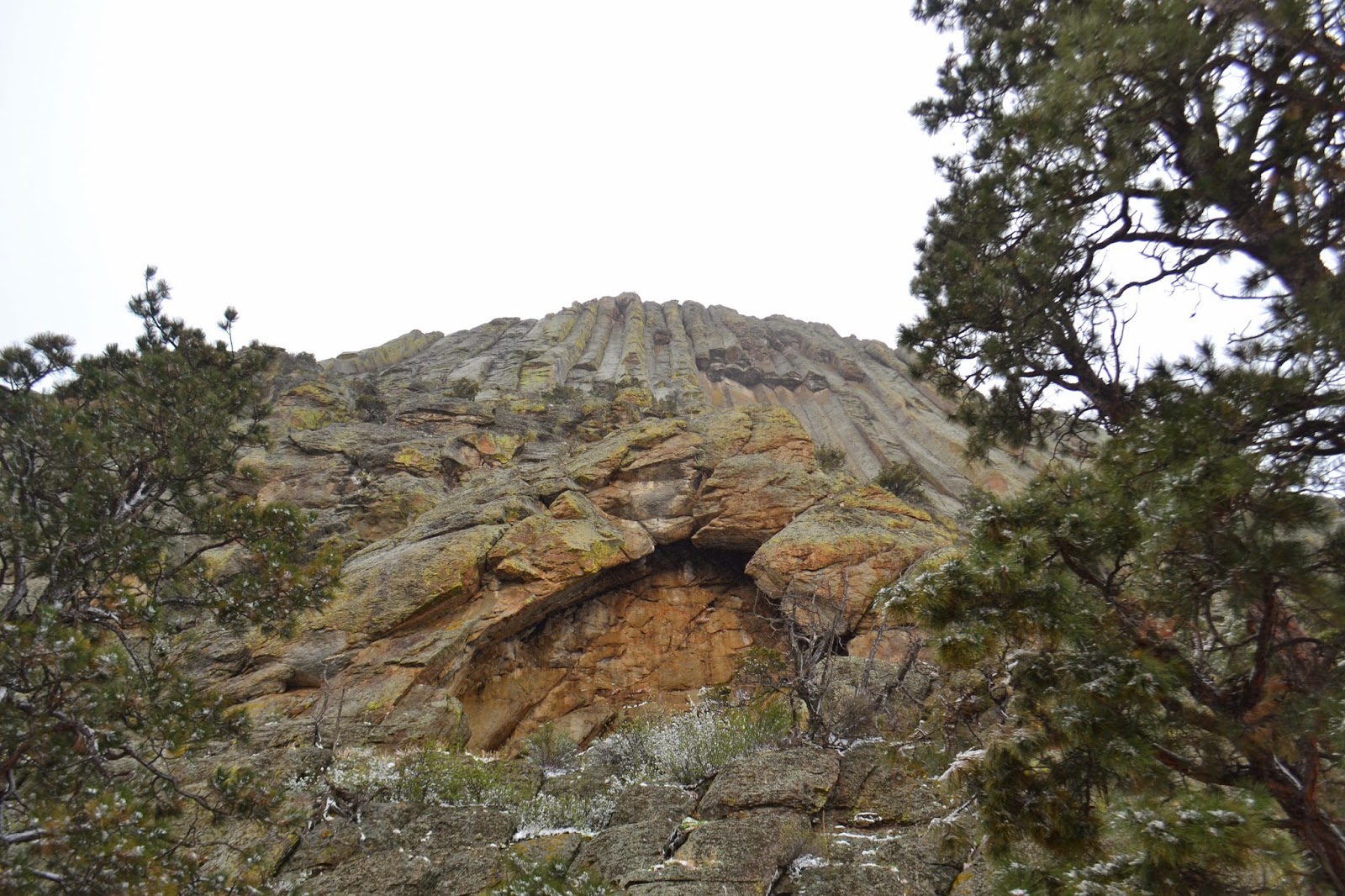 It was a beautiful surprise for us, all the snow.  What with the cold and wind though, we were about ready to be done.  One last picture for the record books. 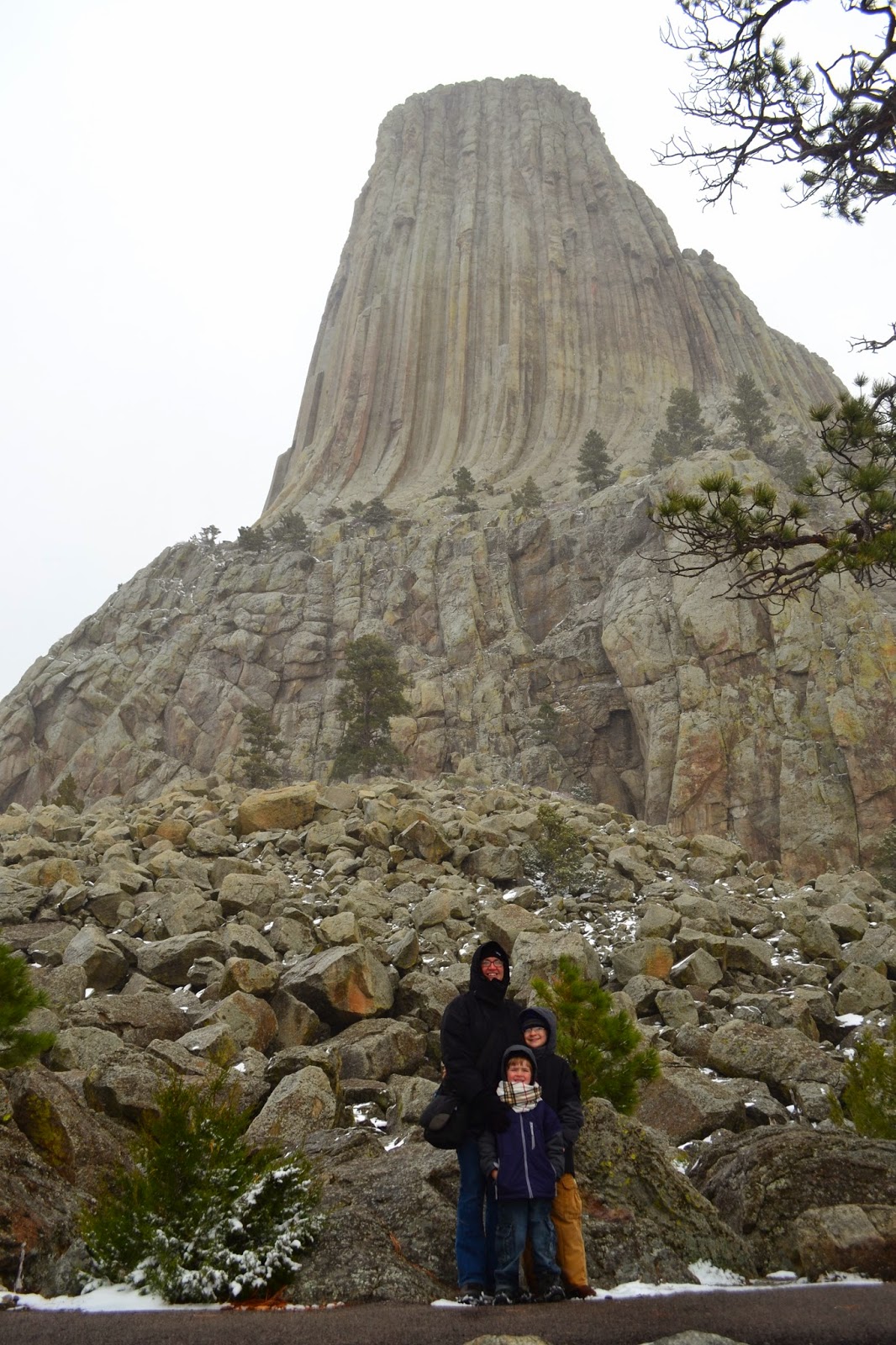 Now next time we visit. 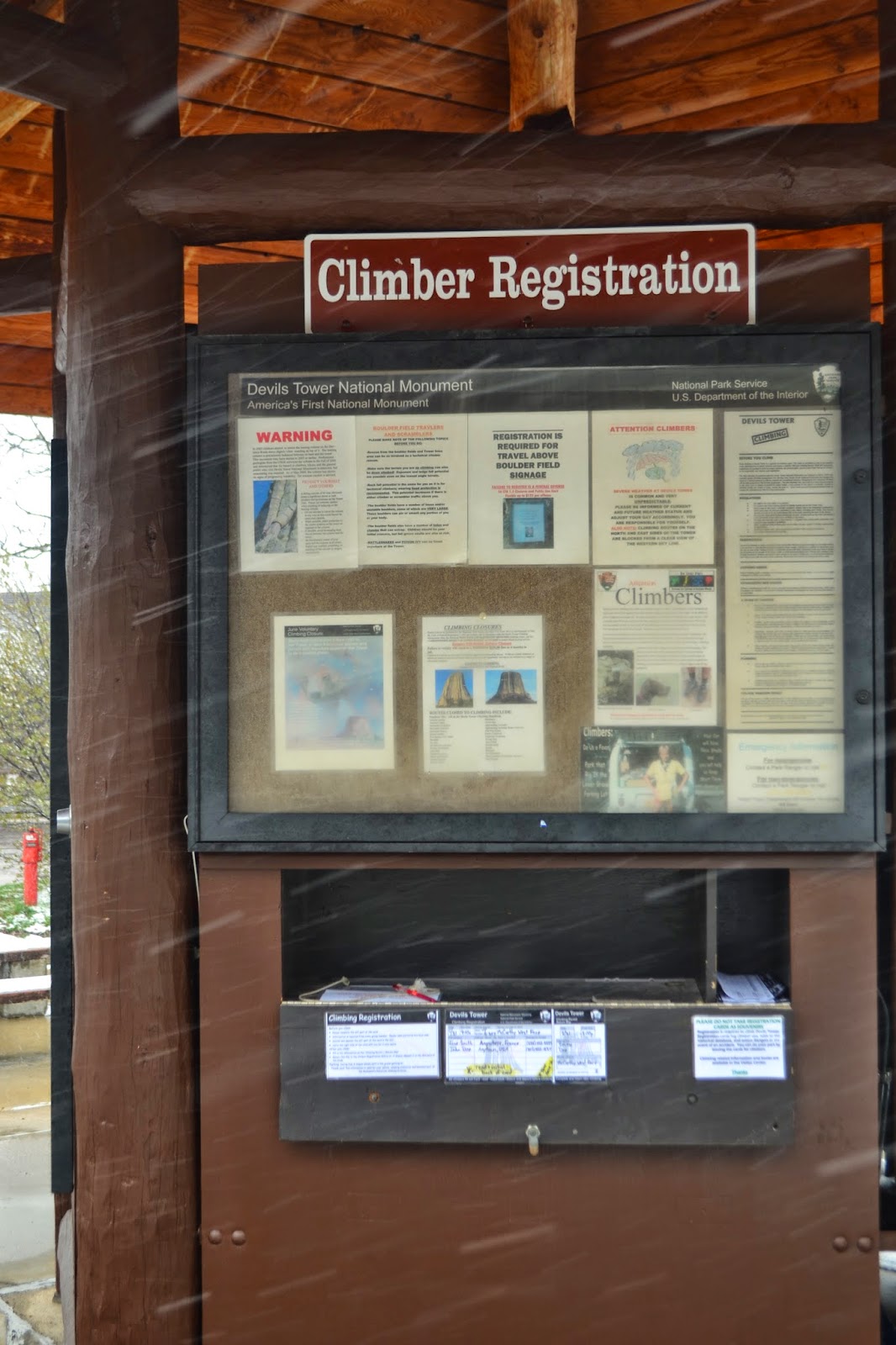