Some places are defined by events in their history.  This area is a prime example.  The stretch between Washington, D.C and Richmond, VA doesn't have any mountains, the rivers are not extraordinary, there are no canyons.  What makes this area so special is the human history and there is nothing that had so great an impact here as the Civil War.  This stretch was the scene of some of the most intense fighting in American history.  It was time to get out and see some of it.

I had been doing some research about the major battles and personalities of the Civil War.  I am no expert, by any means, but I have learned a ton about who did what, where and why.  I did this so we could visit some of the more important battlefields with some context as to why they were important.  I also had to know it well enough to explain the broad strokes to a 4 year old.  Nope, not a typo, 4 year old.  You see, Sarah met a guy at the park, it is actually much cooler than it sounds.  He is half of a really cool couple with kids near Michael and Max's age.  They are very interesting in some very awesome ways which will be detailed more in a future blog post methinks.  And of course, in their own blog, when they start it which should be any day now (hint, hint).

Anywho, Philip brought his kids with us today to the battlefields.  His youngest, Bodin (sp?) is 4.  Sorry for the digression.

I chose the Chancellorsville battlefield for a couple of reasons.  First, proximity.  If given the choice, Gettysburg wins, but it is a three hour drive one way.  Yeah, six hours in the car.   Nope. Antietam is also pretty far.  Chancellorsville is under an hour away.

Second, significance, this was a huge battle.  It is called by some, "Lee's perfect battle'.  He employed some pretty risky tactics that allowed his 60,000 man army to take on the 133,000 men of the better outfitted and trained Union army and win.  He split his army not once, but twice in the face of a numerically superior force.  The second split let Stonewall Jackson, his best commander, encircle the Union forces and run rampant through an unguarded flank.  It was a brilliant move brought on by the temerity of the Union commanders.

It was also possibly the battle that cost the Confederacy the war.  You see, after Jackson destroyed the flank of the Union army, they stopped an formed lines so they could rest.  They had a fast forced march of 12 miles to get around the Union position undetected and then a fierce battle when they engaged the enemy.  It was possible they could have continued to drive through the Union forces, but they were exhausted.  As the Confederate troops set the lines. Jackson and his staff went out beyond the lines to scout the Union position.  The Confederate troops, seeing someone out their beyond the lines, opened fire and wounded Jackson in the confusion.  He died 8 days later.  Many think that it was the absence of Jackson that hurt the Confederates most at Gettysburg and beyond.  Amazing to have Lee's best victory and the seeds of his greatest defeat all wrapped up in one three day battle.

There was a hitch in the plan though.  The visitor's center for Chancellorsville was undergoing renovation and everything but the gift shop (of course) was closed. No dioramas, no guide books or artifacts and most importantly, no movie.  Well, that just wouldn't do with kids in tow.  The site recommended to visit the Fredericksburg battleground visitor's center.  So we decided to head there first and check it out.  This turned out to be awesome because it had one thing that Chancellorsville lacked, an iconic physical feature: The Sunken Road.

On with the pictures.


We went in and watched a 22 minute movie about the battles in the area with a specific focus on Fredericksburg.  Pardon me while I go into another lesson.  This battle took place a year before Chancellorsville.  The Union troops were again numerically superior by 114,000 to roughly 73,000.  The objective was to take teh city of Fredericksburg on the way to Richmond.  This time the Union army was under the Command of General Burnside.  He was notable mostly for his facial hair but had also needlessly killed many troops under his command by sticking to a rigid plan in spite of its obvious futility at Antietam.

At Fredericksburg, the Union army gathered to the north of the Rappahanock river in preparation for the crossing.  The big problem was that they gathered soldiers and artillery, but not the pontoons needed to cross. So, for a few days, they just hung out nonchalant like.  No, we aren't here to invade or anything.  Don't mind us.  For some reason Robert E. Lee wasn't buying the innocent act.  They evacuated all the citizens of the city and sharpshooters took up positions in the brick buildings overlooking the river.  This was problematic for the Union soldiers who went out and started putting the pontoons together.  HA HA HA!  We fooled you, we are going to cross right here BANG! Eventually they had to abandon the pontoon bridges and started shelling the city with artillery.  The river sits in a valley, as rivers are wont to do.  Both
the north and the south sides rise up from the river making for excellent artillery positions.  Great for shelling the city.  So they did, and well enough that they were able to start getting men across in canoes.  Of course, the sharpshooters were still hiding in the rubble so the crossing was bitterly opposed.  After many hours of fighting, the Union had taken Fredericksburg.  That night the Union soldiers put much of the rest of the town to the torch.  All the belongings left in a hasty evacuation that weren't taken, were destroyed.  The next day the Union was to discover that the high ground worked both ways and they were now in the lowest position.  To the east of town, there was a high ground held by artillery and Burnside decided to concentrate his forces there.  He would set orders for the heights directly above the town to be taken, but only intended for that to be a diversion.

The effort to the east of town failed.  In typical Burnside fashion, he continued to throw forces at the problem well after it was obviously futile.  He stated that he really should have been paying better attention to the east.  I guess I'm not sure what he was paying attention to then, because what was happening just south of Fredericksburg was worse.  You see, just south of the town, was about 600 yards of empty, cleared ground rising up a hill.  At the top of the hill was artillery, and a little below was a sunken road carved out of the hill with a stone wall running along it.  It was a stone breastwork perfect for troops to hide behind. 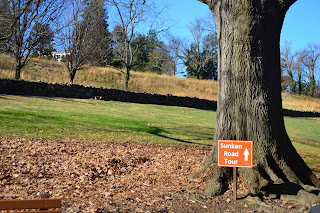 Of course the kids were fired up after the movie.  Phillip borrowed a couple of wooden muskets from the visitor's center and the kids went nuts.


The Union soldiers weren't having as much fun.  Crossing 600 yards of open ground under such circumstances was suicidal.  And for some reason they kept sending them and they kept going.  Wave after wave after wave trudged up the hill only to be mowed down.  And then they sent more.  Eventually they stopped and were repulsed back to the other side of the river.  This action earned Burnside a nickname among some: The Butcher of Fredericksburg. 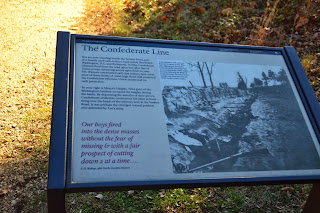 There is more than just the wall though, there are other crazy stories associated with those battles. 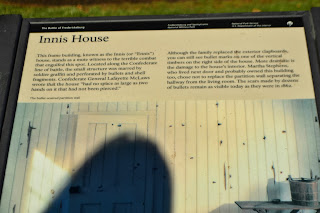 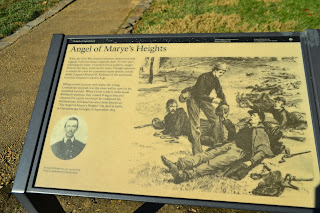 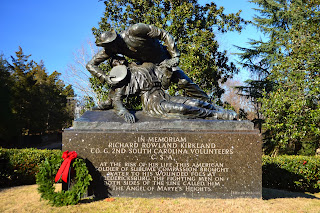 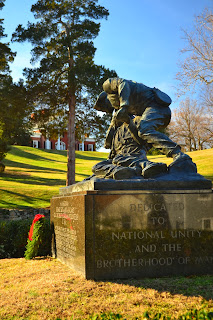 We wandered through the area, up and down the sunken road.  For some reason it wasn't as much fun watching the kids play war when you think about the other people here who weren't playing.  The kids, however, really had fun. 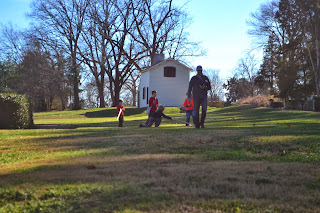 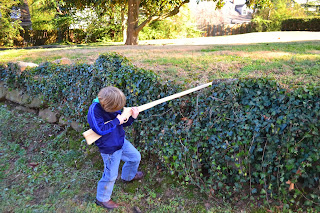 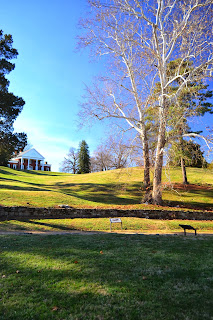 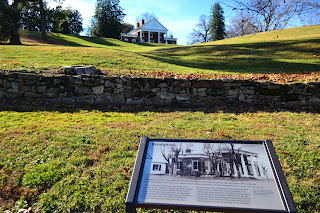 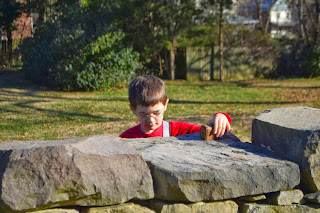 Then it was time to head of to Chancellorsville.  Man, and I bet you thought it was over.

Nope.  It was an eleven mile drive over and we wandered the forested area of the Chancellorsville battlefield where the Union troops were surprised by Jackson. 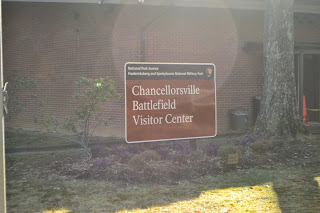 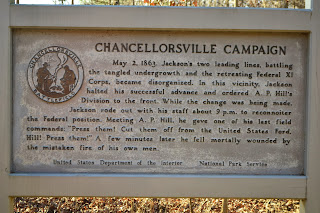 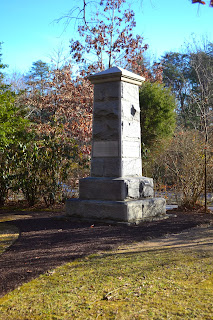 Next up was a pleasant walk through the woods.  Imagine being a Union soldier surprise attacked and fighting while you retreat through this.

Thanks to the National Park Service, we had a nicer time of it though. 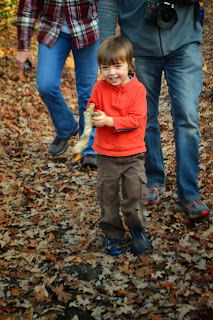 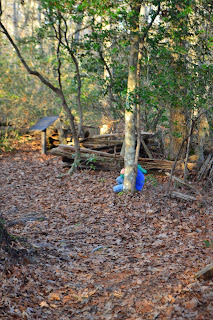 Enough was enough though and we had to wrap up the day.  The kids had a wonderful time playing and us adults liked the educational walk in the woods with friends.  We split up in the parking lot and went our separate ways promising to get together soon.

Then, on the way out, we passed by this field, with artillery set up and Daddy got to get artsy with the camera.  It was a good day. 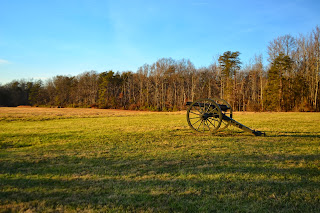 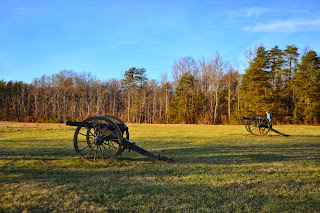 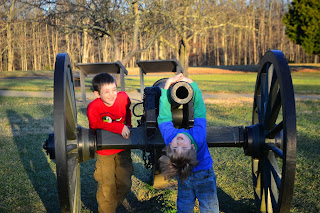 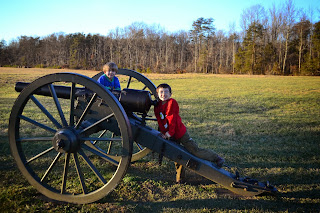 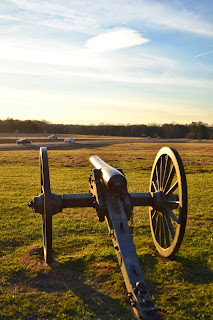 But one of the coolest things was later.  We bought some civil war soldiers at the gift shop.  The kids played with them the whole way home and then got home and set up a battlefield.  Learning can be fun. 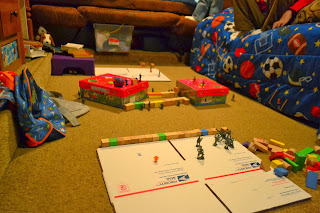 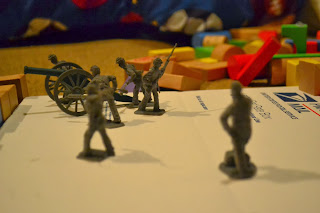 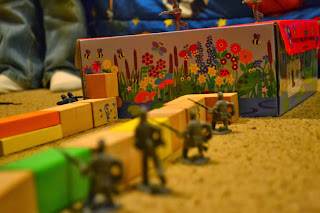 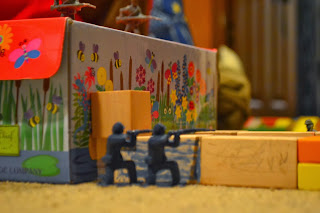 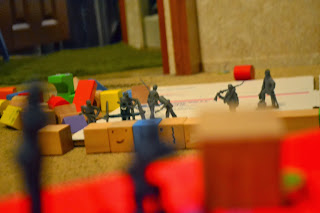 Posted by Adventure Nickel Farm at 8:09 AM No comments: