We went to another president's house.

What's that dear?  The Jeffersons want us over again?  No, we're going to the Washingtons this time, tell the Jeffersons we will have to do it another time.  He is the father of the country after all.

It seemed like a good idea to go to Mt. Vernon before the weather turned too cold.  Also seemed like the pictures would turn out better if there were still some pretty leaves on the trees.  We were heading north toward DC again, which meant silly traffic, but it seemed like it would be worth it.


We went through the visitor's center and picked up our guide. Then there was a 10 minute video presentation of Washington's life in the military and politics.  I had been doing some research and it was pretty interesting stuff.  He had some very admirable qualities and did some pretty cool things. But first, we had to get to the house.  There were 300 school children there on a field trip and they were filling the house tours at the moment.  So we were advised to wait until 1230 to go on the tour.  This gave us some time to explore the greenhouse and associated buildings.

Having dawdled enough, it was time to make our way around to the front of the house for the tour.  This is apparently the most visited house in the US with a total of 8 million visitors in its near 300 year history.

And of course...they don't allow photography in the house.

So, the highlights are pretty cool though.  In the entryway hangs the key to the Bastille prison which was given to Washington by the Marquis de Laffeyette who helped take it down after the French Revolution. There is the game room where the Founding Fathers frequently met to talk politics and strategy over cards.  Upstairs, there was Washington's bedroom with the same bed in which he died.  It was interesting to walk down the private back stairs thinking that Washington probably held this same handrail.  Then to realize, with 8 million visitors running their hand on the same rail, the wood he touched is probably gone.  I wonder what size the rail used to be.  Finally, they run you through his private study and out the back door.  The main dining room was closed due to restoration.

Then we could take pictures again. 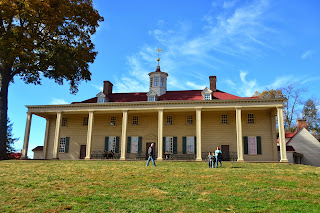 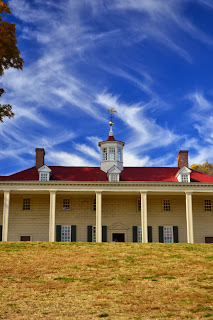 What I learned in my research is that many people, including myself, think that Washington's most important act was giving up power.  After the Revolutionary War, many of his senior staff and many politicians thought he should be made a military ruler of the country.  Think about that.  You are the Commanding Officer of an army that just pulled off the most stunning upset victory in the world.  You are world famous and popular in your own country beyond belief.  It would be be very easy to just assume power.  Instead, he resigns and goes home, to Mt. Vernon, to be a farmer.  Not too long after, he is called back to power and unanimously elected the first president.  Then re-elected, again unanimously.  These are the only two times ever that a president has been elected unanimously by the electoral college.  After his second term, though people are clamoring for him to stay and keep power for life, he resigns and goes back to Mt. Vernon, to be a farmer.

Finished at the house, we toured the grounds. Situated on a hill overlooking the Potomac river, I can see why it would be an attractive place to which to return. 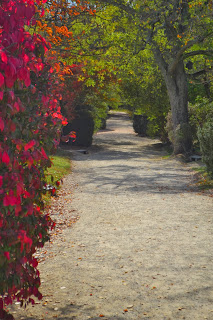 This led us down to the Old Tomb, where Washington and his family were interred initially.  He decided this was neither a good location, nor a good structure and began plans to have a new one made.  He died before it could be constructed.  When it was finished in the 1830's, he and his family were relocated.


There is another memorial area at Mt. Vernon. 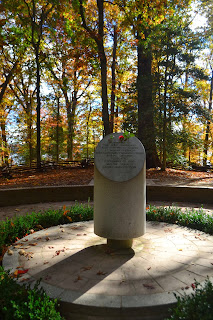 Finally there was time for a nice stroll across the property before lunch and the museum. 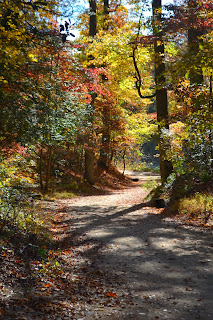 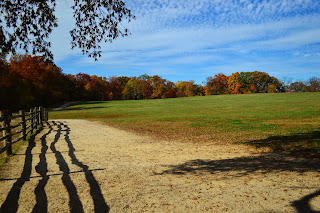 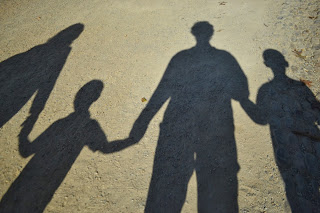 After a much needed meal, it was quieter when the hundred or so middle schoolers left, we made our way into the museum to check out some history.  The museum tells more of a narrative history of Washington.  He was the son of a wealthy planter, but his father died when George was relatively young and a lot of the benefits of a wealthy father didn't quite make it down to him. So, he became a surveyor, among other things, and made his own way.  Then he joined the militia and in turn, the King's army.  He took part in a battle near the Monongahela River where he rallied the troops after his commander was killed.  His actions that day started a reputation as a war hero that led to certain appointments with the Virginia militia and eventually the Continental Army.  The rest, as they say, is history.

There was a really neat theater in the museum with rumble seats, strobe lights, fog and snow machines, the works.  It outlined the major campaigns of the war in a way that enthralled even the children.  All in all, it was a pretty awesome day.  Heck, we even got to see an authentic set of Washington's dentures.  No pictures allowed though.

Again, if you are in the area, I recommend it.  Even a history buff is likely to learn something new and interesting about a famous world historical figure.

After three days of gloomy weather, the sun finally came out today just as it was predicted.  We had been waiting for a nice day to come along when I was off so we could go to Monticello.  I have always admired Jefferson.  Heck, anyone on Mt. Rushmore really.  The chance to go visit the house he designed and lived in was just to awesome to pass up.  And it was yet another chance to try to sneak some actual knowledge into the heads of our children.

It was only an hour or so driving, so we didn't even have to get up early.  The fall colors were amazing around here, but they grew just a little less spectacular as we went East and I think the altitude inched up a notch. 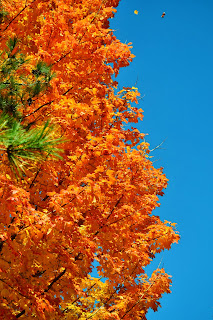 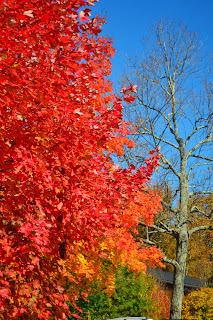 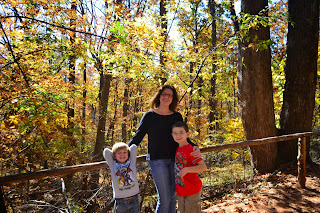 Midway up the trail is the Jefferson Family cemetery.  It was started when Jefferson and a friend decided they would be buried under a large oak tree.  It is still used by descendants today. 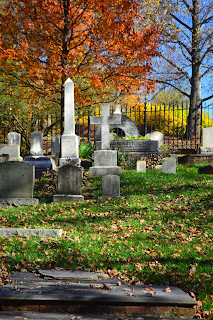 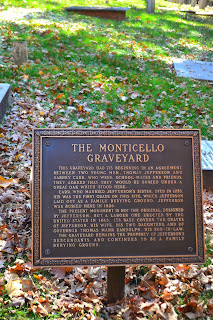 Continuing up the trail brings us to the grounds just below the house from teh West.  We can't see the house, but instead arrive in the gardens which makes Michael happy.  Like Jefferson, he enjoys studying plants.  When you buy your ticket, you are assigned a time to tour the home and so we can't stay and muck about in the garden as long as we might like.  The view down the hill and across the landscape is beautiful and it is easy to see why he chose this particular spot.


Then it was time to tour the house.  They gathered everyone together in a group and gave us a speech about preserving the place for future generations with the standard no eating, no drinking, no chewing gum stuff.  Then they dropped another hated little tidbit.  No photography inside the house.

So you will have to settle for some outside shots, internet research and a few descriptions. 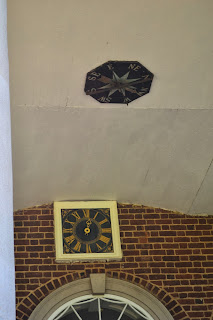 Some of the coolest things are the little details.  If you get curious, you can Google most of these things to get more information.  In the picture above you can get a taste of what I am talking about.  The first shot is an elevation of the front of the house.  Note the weather vane.  It is connected to the compass that you see in the second picture.  That way, you can see the wind direction from inside the entrance or on the porch.  Neat, right?  The clock face is actually only a small part of the clock.  The inside has another face of the same clock.  It is powered by weighted balls hanging on a cable.  The cable also, as it descends to power the clock, marks the days of the week.  There are tons of ingenious gadgets and inventions, many of them invented by Jefferson, scattered through the house.  You could spend days just soaking in the details.  The tour is guided though and you only get a brief time in the designated tour rooms.

The first stop is the entryway where Jefferson set up a museum of things that interested him.  He had fossils, Native American artifacts, maps (He loved maps) and various other artifacts.  One or two of the artifacts were even original to the place like moose antlers from the Lewis and Clark expedition.  We got to see the North square room, Jefferson's book room (with a small number of his original books), his bedroom/study which was filled with many of his inventions and gadgets. Then we went into the parlor, which was where the much entertaining was done.  It was filled with paintings, musical instruments and artifacts.  I was entranced with the mirrors as they were original to the room.  It was very cool to think of seeing my reflection in those mirrors and think about who else has been reflected there.  Pretty cool.

The tour finished by taking us through the dining room that has a wine dumbwaiter and an octagonal bedroom where the Madison's stayed when they visited.  Then it took us out on the walkway toward the North pavilion.  The tour ended and we were again free to wander and take pictures. 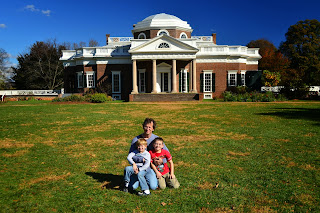 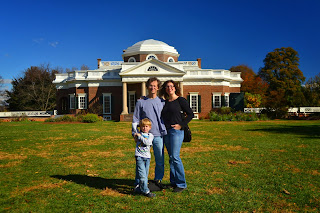 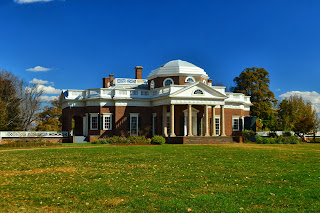 Then we peeled around the side and checked out the dependencies.  These were the areas under the house where all of the work was done by the slaves.  And they go out of African American couples walking around on the tour and, after wondering if they were related to Jefferson, pondered how different their impression of the place was than mine. 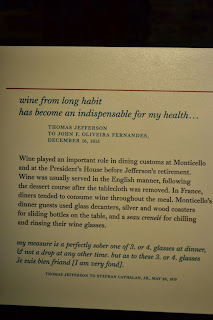 Then we stopped learning for a minute and just enjoyed the beautiful grounds.  This place is really nice, well thought out and designed. 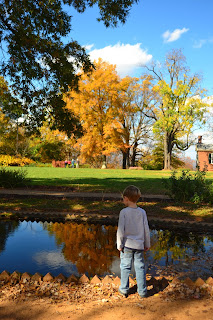 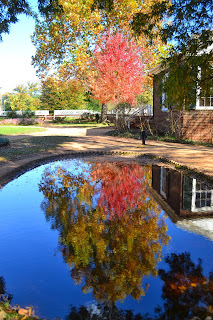 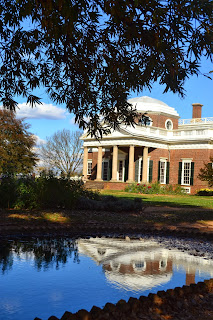 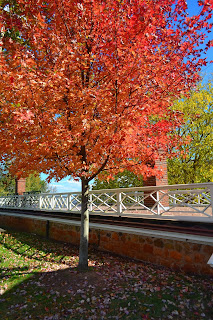 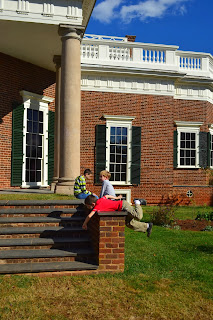 By this time we were really hungry.  We went to the little cafe on site and expected the worst.  We were pleasantly surprised though at the good food and reasonable prices.  I even managed to have a Monticello Reserve Ale in a souvenir glass. 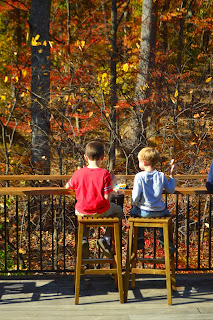 After lunch we went to the kid's discovery center where Michael and Max played and practiced their architecture. 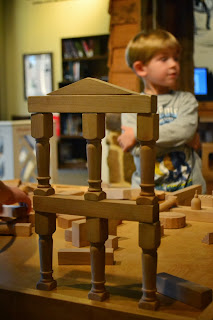 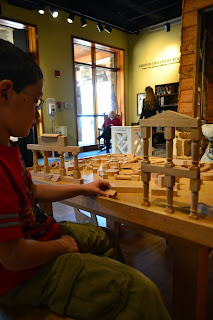 Then we made our way home.  It was beautiful, interesting and educational.  That is everything you ever want in a field trip.  Pretty great day over all.  If you are ever presented with the opportunity, I do highly recommend it. 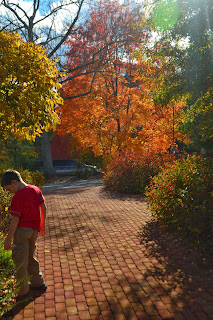 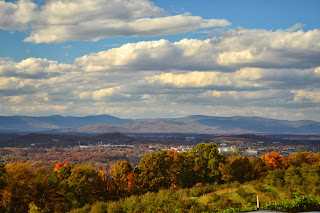