When last we left, I had just finished a productive day off from work and was looking forward to getting a few things done in the hours before I had to head off to work.

Wouldn't be much perhaps, but with small nibbles, whole meals are consumed.

There was something holding me up.  And it looked like this...

In order to access many more parts, I needed to get the fan clutch off.  That required a tool I didn't have.  So, there would be a trip to the auto parts store.  Time was limited that day, so I looked around for something big to take off and found.


Yeah, that wire was sitting right on top of the AC compressor.  It wasn't hooked up to anything, just sitting there.  This, of course, means it is vital to the operation of the vehicle and will certainly be my doom.

What can I take off?

This is what never seems to get mentioned in shop manuals and write ups like this.  Something simple, like pulling off a radiator hose, will drive you batty.  No matter how I pulled, pushed, twisted and tugged, it wouldn't come off the other side. The hose clamp is one of those types you have to squeeze with pliers instead of unscrew and it was also built in to the actual hose, so I couldn't just move it up or down past the ridge on the pipe underneath.

I sweated, struggled, cursed and spat at that damn thing for an hour.

I wanted to cut it off, but had visions of it being some specialty radiator hose for a hundred million dollars or something. Besides, it should just COME RIGHT OFF!

I returned the next day, in the few hours before work for...

I got the fan removal wrench as a loan-a-tool from Autozone (thank you Autozone.) I also got a breaker bar for the serpentine belt tensioner pulley. And look right there.


Then, I attached the wrench to the fan clutch and turned.

And the whole thing turned with it.  I had left the serpentine belt on because I heard it would keep everything still when I turned the nut, but alas, no.

Again, I appeared to be short a tool.  However, the universe occasionally makes up for things like radiator hoses that don't come off.  Right there, in front of the truck, something caught my eye.

Something that was sitting there acting as a lock on a sliding window.

No way that happens, right?


The next day, I gave the whole truck the finger and just rested before my shift in the ER.

Then, on my first day off, I went back at it.

But, I forgot to take a picture of a seven so,

Day seven started with a bang. I took the AC compressor off and pulled it out of the way. I read on a diesel forum that I could just take it over to the passenger side battery tray and didn't have to disconnect the pressurized hoses. YAY!


Then it was a bunch of fiddly little wires and connectors that I hadn't been able to reach or needed to get out to get at things.

Such a pain in the butt.

I got tired of chasing down wires and realized there was this thing that straddled the whole engine that was blocking access to so many thing.  I think it is called a crossover tube.

The little freaking thing took forever to get off.  But, I'm improving.

Then, I took off the pipe that goes into the blopck from the radiator. The two thermostats were in it. I took a video to remember which one goes in which position. It seems important. If anyone is interested in seeing the videos, I will post them. Just ask. Otherwise, I'll save the time.


Then, it was the big fu*(&ng metal thing.  I don't know what it's called, so that will have to do.  It can be seen best in an older picture as I didn't take a good picture when I pulled it out.


And that was about all I got done on that day off.

Today, I was primed for more.

I was tired. It was a beautiful, sunny day. We decided to say to hell with it and take the day off.

We went for a walk in the woods.  We found mushrooms. 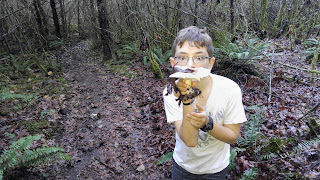 Posted by Adventure Nickel Farm at 11:16 PM No comments:

Back at it today.

And, not a work day, so I can hopefully make some real progress.

I got my morning coffee, shook off the antipathy for the project, and dug back in.

The state of affairs at the start of the day.

So, I got started. I fought with the fan shroud some more. Whatever evil Nazi bastard designed those plastic rivets should be forced to listen to his favorite band played as elevator music for all eternity. I couldn't get enough room to do anything.

Frustrated and wasting time, I switched tactics. Let's take something else out.


It ran between the alternator and the grounding bracket. Then, I thought I might just have better luck from underneath.  So I crawled under and pulled off the splash pan. I think that is a 12mm socket. That was my tool for much of the day.


Then, we got a delivery.


We are getting our wood-burning stove installed this week and thought it would be a good idea to get some wood to burn.

We had a cord delivered which we then had to load into our semi-truck trailer/woodshed.

I really didn't want to go back to working on the truck. Wouldn't it be nice to just take the rest of the day off and watch some football?

Of course, I don't really have a TV. And the truck won't fix itself.

I still couldn't free the fan shroud, so I decided to pull out something big, something that would make me feel better.

Nothing was going to be easy.  I just wasn't getting this.  Something needed to give.

So, I took off the easy upper radiator hose and labeled it.

Then, I started eyeballing how to get the bigger one out.


Frustration was reaching a boiling point.  Of course, that's when learning happens.

I thought, my problem was access.  So I looked for something easy to access.  I found this bracket on the top of the engine for the oil-filler tube.  Came right off.

We can build on this.

I started looking around for another easy target. I spotted the fuel filter.


Label all parts taken out, log the step into the notebook.

It seems I need to pull things out of the way to access the other things.  Hmmm..

Let's try something a little bigger.

I pulled out the wheel well on the driver's side so I could access the bottom of the electronic module that was attached to the battery tray. It looked important, like it wouldn't like being bathed in water and coolant when I disconnect the upper radiator hose on that side.  I forgot to take a picture.


I think this is the moment learning occurred.  The whole job here is removing things to get better access to remove things.

Anything that is impeding access to another part that needs removing has to go.

Fine.  It comes out.

Starting, now on the passenger side, with the tray that holds the airbox.

Fine then.  Passenger wheel well has to go.

I pulled off the fan shroud, finally, and saw something weird down by the bottom of the radiator.

That was all I managed. The next three days are work days, so limited progress expected.


Posted by Adventure Nickel Farm at 12:27 AM No comments: