Tomorrow it is off to the airport and a flight to Ft. Lauderdale.  It will be the longest stretch away from my family ever and I am really not looking forward to that part of it.  I have been making the joke that I feel like the dad from an 80s movie about getting your priorities right.  "Sorry son, I would love to see you in the championship baseball game, but I have a really important business meeting right now."

It is just three weeks.

So, let the adventure begin.

There are reams of paperwork for all of this, some of which has even been done.  Thanks of course to Sarah.  She has been the logistical and sanity coordinator for quite some time now and does an unbelievable job with it.  Heck, it might be good for me to leave so she can get a rest from all the crap she does for me.

I hope that Michelle and the family get along.  I think they will, but you never know.

Oh well, eventually you just have to jump.  Stop worrying and just jump.
Posted by Adventure Nickel Farm at 8:36 PM No comments:

The new year finds us in a new locale.  By new I mean new to us and new to existence.  My sister Michelle had an RV pad built on the land behind her house, had electricity wired in and here we are.  It is really cool having a family member so close.

That being said, there have been and continue to be some challenges.  First was getting us in here.  If you see a sailboat in the marina surrounded by other boats, you form an impression of its size.  See that sucker hauled out on blocks and alone and that initial impression can change.  Same thing here.  When you see the RV in the park, it looks comparable to the other RVs around, maybe a little bigger.  See it trying to pull into your gate is another.  This thing is big.

We managed to get through the gate with 2-3 whole inches to spare.  I don't know what I was so worried about.  They only had to pull up one post.  Then we had to back up into the road to make another turn.  Then it was 4 wheel drive time as we drove through unimproved field around the edge of her house.I got lined up and then tried to make the turn up a short, steep slope onto the pad.  The first attempt up I hit a patch of mud caused by drainage from the horse's water trough.  Since I was turning at the time, it didn't go well.  The nose of the truck started sliding down the slope and to the side...right toward the light pole.

I managed to get that slide arrested and backed up to try again.  Maybe if I turn sharper, earlier, I will be straight enough going up the hill that I won't slide sideways.

Same thing.  Halfway up I start sliding sideways.  It probably didn't help that I had the kids in the back of the truck and they had unbuckled to jump around the back seat to get a look at the horses, and dogs and everything else.  Let's try this again.

Third time was the charm. I made it up to the pad  However, the pad wasn't really long enough for the RV and the truck.  So the nose of the truck is down and off the pad making it harder to get level and get unhitched.  After several repositioning runs, we were there.  There were some small custom modifications of the pad to make places for the leveling jacks to touch down and we were parked.  Good thing the electrical cable reached.

We got a water hose set up.  The only thing we didn't have was sewer.

After we set up, we went inside.  My little sister Kerri was there with her son Nicholas.  I was nice to see my side of the family again.

That night the forecast called for rain.  So Michelle and I had to go out and set up a temporary wire fence to keep the horses from messing with the trailer.  The horses had to come up from the back pasture for the shelter of the barn.  One of the horses, Buddy, was very curious about the new thing in the pasture.

Next day was fence day.  We tore down some fence from around what used to be a pond and set it up around the RV.  We also took down the fence between our RV and Michelle's house.  Did I mention that it rained the previous night?  The mud was awesome.  Five pounds extra on each foot and all you could do not to slip and fall on your ass. Several hours later we had a fenced compound. It wasn't particularly straight fence, but it was there.  That night, New Years Eve, was supposed to freeze, so we disconnected the water.  Couldn't use it anyway, we figured, we didn't have sewer hooked up.  We rang in the new year with fondue and alcohol.  Good times.

Next day was working on the sewer.  The problem was that it was New Year's Day.  Not much was open.  And apparently, there is a new phenomenon of giving RV sewer hoses as gifts, because both the Wal Mart and the RV store we had been to on the previous day were out.

So, here we are.  Set up, but still some work to do.  Keeps it interesting to take it to the last minute.  I fly out Friday. No pressure. 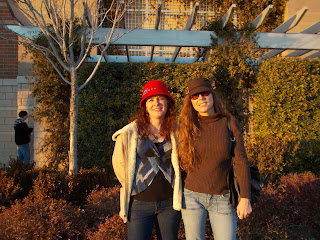 Time to put up some fence. 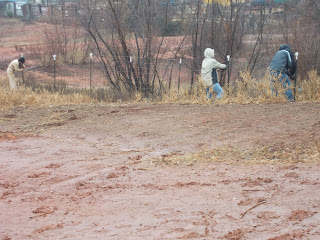 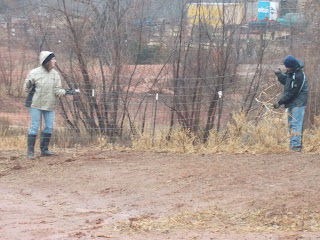 Kerri watched the kids inside. 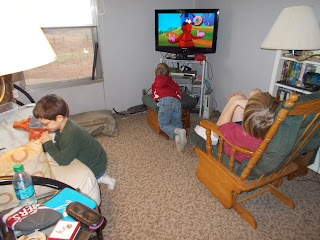 Did I mention the mud? 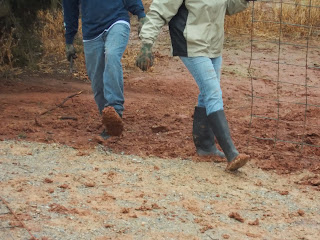 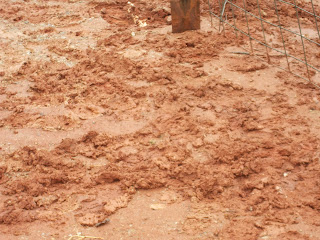 Not too muddy for kisses. 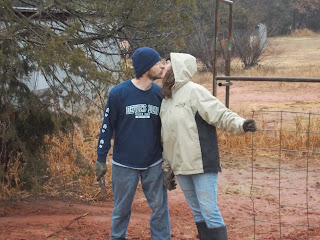 The girls getting it done.  Sarah drives a mean t-post. 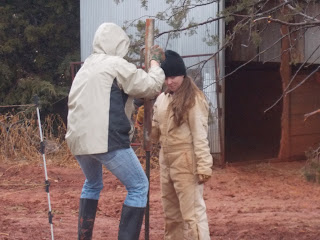 They let me help every once in a while. 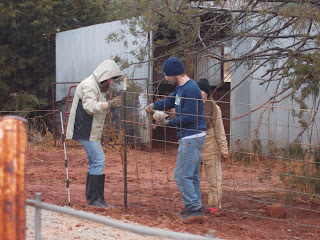 Then we started the half naked fondue party. 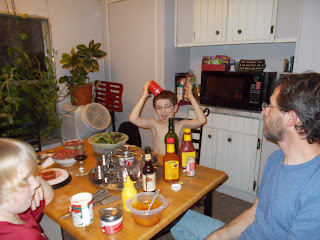 Then we took some pictures. 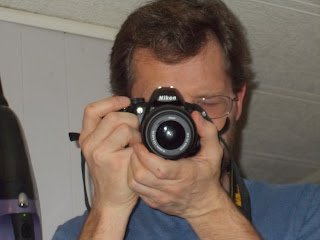 Now for the eating. 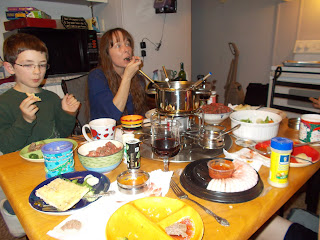 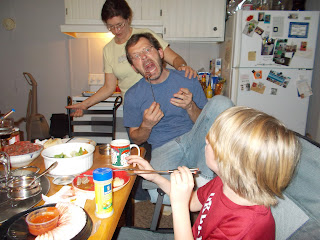 Then we started with the alcohol.  And the cameras were turned off to protect the guilty.  All of these pictures were from Kerri's camera.  I may throw one or two off of my camera if time permits.

Posted by Adventure Nickel Farm at 8:51 PM No comments:

It was an interesting year.  Time for another one though.  Time to forget and write 2012 as the year for a few weeks.  I do catch on eventually.

We are safely arrived in Oklahoma.  Getting into the RV spot was probably one of my top 3-4 driving accomplishments ever.  We currently have electricity and water.  No sewer yet, I guess that is a problem for next year.

I will be writing a bit more of a report, but not now.  We are trying to do the whole New Year thing and probably will fail miserably.  I just can't get excited anymore about the prospect of staying up til midnight for no good reason.  HEY YOU KIDS!!!  GET OFF OF MY LAWN!

Sorry.  Showing my age a bit there.

Just wanted to wish everyone a Happy New Year!  I hope the good is better than the bad and the balance finds you well.
Posted by Adventure Nickel Farm at 8:29 PM No comments: