Woke up, had coffee and decided, eventually, to drive North to Big Sur and check things out.  So we did.  There was a waterfall hike we wanted to do and another short, but interesting hike we looked at.  Drove for a few hours.  We checked out some elephant seals on a beach, saw the Hearst Castle from a distance and drove the twisty roads.  We got to the state park and found that no dogs were allowed on trails.  So we left Satchel in the truck at the really short hike and checked out a neat waterfall.  When we got to the park for the longer hike, still only 1.5 mile round trip, we were reminded by the park ranger that no dog were allowed on the hike and it was too hot to leave the dog in the car.  68 degrees in the shade.  Too hot.

Not wanting to piss off a ranger and get cited, we turned around and drove home.  Oh well. 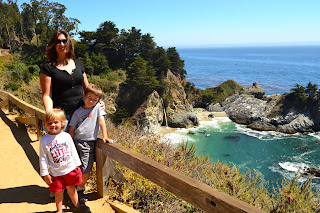 Posted by Adventure Nickel Farm at 10:47 PM No comments:

Just got home from work and cleaned up.  Normally I don't blog after work...too tired.  But there is something I wanted to mention while I was still kind of excited about it.

This morning I got an email from the Tough Mudder folks.  It was an invitation to the World's Toughest Mudder.  The requirements are that you finish in the top 5% of the times at your event.  Now, before I get too high and mighty there are a few caveats.  There is no official time keeper.  My time was measured from my scheduled time til when I remembered to ask Sarah how long it took.  Not everyone reports their time.  Only those interested in being invited to the WTM.  So, it could be that only 5% of the people who ran reported their time, so everyone reporting got an invite.  It also might be that anyone that seems interested gets invited as the entry fee is over three times the normal entry fee.  Still, I am proud and I have the email saying I was in the top 5%.  Yeah me!

The WTM is like a normal TM course, but it is a 24 hour endurance event.  Whoever completes the most distance in the time allotted wins.  It is a $15,000 prize.  I don't think I could win, I don't even think I could go.  Sure would be interesting to try some day though.  I guess that makes me weird.


Posted by Adventure Nickel Farm at 12:22 AM No comments:

Good day today.  Actually a couple of good days in a row.  Yesterday we called off the chores and went on a hike to Montana De Oro up North of us.  That's what we were missing, some adventure.  It turned out to be a wonderful day for viewing wildlife.  We visited tide pools and saw lots of sea creatures including sea start, anemone and many others.  Coming back up from the bay we saw a rattlesnake searching through the bushes.  Later on we saw another rattler on the trail.  They didn't seem too interested in us so we marched on our merry way.  Later we saw some ground squirrels, pelicans, lizards and such.  It was a good day and a nice hike.

Today was back to chores.  I managed to get our front toilet fixed and knock that off the list.  Then it was on to the daily grind of laundry, dishes etc.  We decided that we would have a movie night tonight.  We rented the worst movie I have ever seen.  It is called Smitty. It's about a city boy going to the country and getting a dog.  It has no redeeming value at all.  Some movies are so bad they are good.  This one isn't.  Yikes.  Now, Sarah and I are going to watch the movie we rented for us while the kids sleep.  Wish us luck.


Posted by Adventure Nickel Farm at 9:38 PM No comments:

7/15/2012
Posted by THEROTU.
Well, today I'm struggling with my sanity so I thought, "what the heck, I'll put it on the blog".  After dragging kids to do laundry at the local laudromat on a Sunday afternoon, in an oceanside vacation city, with a huge GMC3500 dually that doesn't fit anywhere...I'm tired.  One of the kids then had an accident at the grocery store right after all the laundry was clean.  Yay.  Then we HAD to get the next book for Michael because he finished his book report (which is his assignment he now has to complete to get a new book since he whips through them so fast). Of course, they don't have the book he wants so the nice lady who owns the used book store calls a few other stores to see if they have it to no avail.  She takes down my number and said she'd call if it comes in.  An hour later she calls and says she has it.  Gee.  Michael begs and pleads so I go BACK to the store and pick it up.  Don't forget.  I'm driving this big, huge, red truck.  Michael also likes to remind me that this truck is not "green" and it's really bad for the Earth.  Thank you, Michael.  Oh just a typical day for Mommy.

So when the "real world" gets me down, the best way for me to get over the blues is to go on an adventure.  Eric has been a little down since the Tough Mudder as well so I sent him a text saying that I thought we should go on a family hike tomorrow to Montana de Oros.  Now I find we can't take the dog.  Darn.  Why can't anything be easy?  I also have to pack for our hike tomorrow or we'll never get out before noon, and I need to make dinner so Eric doesn't have to eat frozen food again after working a grueling 14 hour day.  It's 615pm.  I'm tired.  Now I wonder, if I lived in a "sticks and bricks" house would I still be this tired?  Probably.  Would I be considering hiking around the California coast tomorrow to see a chain of ancient volcanic peaks by the Pacific Ocean?  Probably not.  I'd be considering pulling weeds or mopping a floor that is much larger than 8'x4'.  I'd be reminded we need a new roof and thinking that the walls needed cleaning or some insane thought such I this.  So rv living still has its ups.  Now if I can just shake off "the real world" and try to enjoy my "vacation life".  Oh yes, the rv walls need cleaning too.  Darn.  Tomorrow we're hiking and I'm going to see pretty stuff if it kills me!