Coldest stretch we have done so far.

We lost the water last night as the Y I had on the park spigot froze over and I couldn't get the hose directly onto the park water without it leaking. So we turned on the water pump and had a bit over 30 gallons in the tanks. Today I pulled the Y off and hooked directly up and couldn't get the hose to not leak. Sarah took a shower and I pumped 60 gallons into the tank. Then, I hooked up the pressure regulator and the hose and managed to get the leaky hose down to a slow intermittent drip. We have water onboard in case of another loss. The heated hose seems to be working with the exception of the crappy fitting at the end. I will have to find a better hose if we are to use it again. I suppose. Well, if it isn't cold, I won't think about it and if I don't think about it there is a chance it won't get done. So we may yet struggle through this same problem again later. sigh.

Michael has been doing experiments, a bit prompted and fully supported by us of course, about what freezes and doesn't. Last night he left out plastic cups filled with water, antifreeze, and 1/2 water 1/2 antifreeze. He couldn't wait to get out and see the results this morning. We even got him the antifreeze tester to check how cold each is supposed to be good for. Tonight we mixed up some salt water to see how it will do. Sarah and I both managed to get in a run and a workout today despite the 30 degree temperatures. That cold air sure burns the already burning lungs. I was so concentrated on not dying that I almost stepped on a raccoon. Missed it by about six inches. Satchel never saw it either though. I snuck back and took some pictures after the workout. I have a sinking suspicion that it will still be in the same place tomorrow. Another sigh. 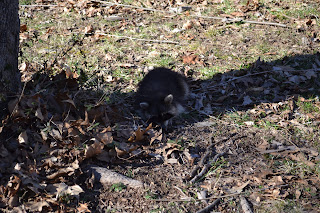 And on a lighter note, I finally bit the bullet and registered the domain name Adventurenickel.com I also signed up for domain hosting and I hope to be moving the whole show over to a real website. The production values will be amateurish and poorly done, but it will be mine. Hopefully it will evolve into a better site and more traffic and so on. Time will tell.
Posted by Adventure Nickel Farm at 5:49 PM No comments:

Today Sarah did the taxes, no hiring anybody. Not that we ever have. And I changed the brake pads and rotors on Hondo. I had never done that before so it was good. The second one went faster than the first. Now I know I can do it, so I hope to never have to pay someone to do that again. Next time I work on drum brakes and maybe I can do the trailer some day. I would add pictures, but the connection has pooped out on me. Maybe some other time.
Posted by Adventure Nickel Farm at 6:08 PM No comments:

Sitting at the dinner table tonight, we had a discussion about the stomach. Where it is, how big it is and whatnot. Sarah got up to try to find an old place mat with human biology stuff on it, there was a diagram of the internal organs. She couldn't remember where it was which brought on a discussion of memory and how hard it can be to remember something from a long time ago. Michael said his memory was so good he even remembered things from the green house. The first was sitting around the big round table and the second he would never, ever tell us about.

HE did give us hints. It started with the letter A, but that is it. We asked him what it rhymed with..."It rhymes with...Maxident."

Kids.
Posted by Adventure Nickel Farm at 4:41 PM No comments:

Interesting day at work today. There was a mass casualty incident. One of the local chicken processors had an ammonia leak and we suddenly got 15 patients coming in with inhalation exposure. Pretty cool to see the hospital disaster plan go into effect. Lots of people show up from home, other floors, other departments. Everyone is eager to help, to be a part of the action. It grew crazy busy for a few hours and then it was playing catch-up for the rest of the day. I managed to get pretty well caught up and get out on time. Just as I was walking out EMS was walking in with a CPR in progress going into a room I had just given to the oncoming nurse. Perfect timing.

Then home, where the sweetness and wonderful can be sublime in its simplicity. Max was using a floss pick to clean his teeth before bed. These things are shaped like animals with the floss strung between to arms, or a beak or something. Max was flossing when he told me he needed a little help. Before handing me the pick, he tells me, "But, it's got some slobber right there. You watch out for that."

And getting hugs from them both is so awesome. Max gives these hugs where he clings on so tight he is almost like an appendage. Micheal still wants to snuggle too. He gets so tired he is almost falling down and then just wants to lay in your lap while you read him a book. Life is good.
Posted by Adventure Nickel Farm at 7:18 PM No comments: