Wow, there has been a startling lack of adventure this December.  Too few nickels too, I suppose.

That's the way it goes when there is only sixteen minutes or so of daylight each day.

But now we are past the solstice and the days grow long again.  I think we had eighteen minutes today.  We decided to use all that extra time to go out and find some snow.  We had heard there was lots of it nearby, but couldn't see more than a mile or so out, due to the rain.  We pointed the car toward Rainier and started driving.  Sarah found a webcam up at Longmire that showed several feet of snow on the ground, so we went for it.

After the two hour drive, there was a line heading into Rainier National Park that wasn't moving very fast.  I guess going up there over the Christmas holiday, on a Saturday no less, is a thing up here.  The daylight was trickling away and we made a desperate decision.  We would turn around and go back toward a city park we passed earlier and just let the kids have at it.  It's important to be flexible. 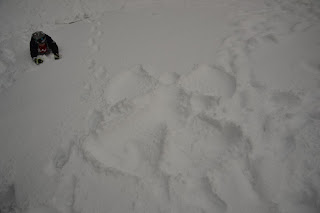 I think it was a good idea to turn around.  We had a pretty good snowball fight with some of the other kids there.  The boys built snow forts and snow angels and nobody ate any of the yellow stuff.  Maybe we can hit Rainier on some other, non holiday, non weekend day. 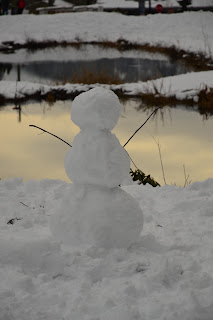 Posted by Adventure Nickel Farm at 6:50 PM No comments: