Last day off before I head back to work.

There was a tree hanging over the RV with some dead branches.  Steve, the park owner, called his tree guy who came out today to fix it.  So, we packed up what we had to and moved the house out into another spot while they took down the tree.  So it was a pain in the butt to move the house, but we got a free aerial show out of the deal.

I posted my story for the September Challenge over on the AFO forums and was the only person to post a story.  I fear for the life of AFO.  Oh well, I will still write and post even if it only means talking to myself.  I do that already anyway.

The Tough Mudder is this weekend and I haven't run for the single longest stretch this year.  Oh well.  I guess that is why it is a Tough Mudder.  I better try to get to bed early.  I never sleep worth a crap the first night I have to wake up to an alarm.  I'll see if I can share some pictures. 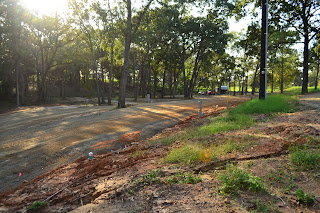 Plenty of space when you are the first occupant of the new park. 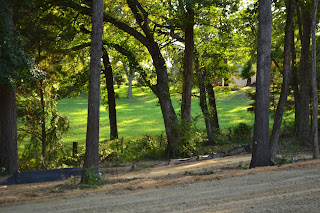 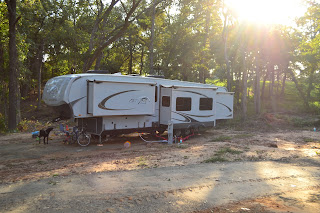 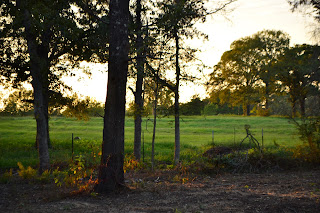 I was going to post some pictures of the tree trimming aerial act, but left the good camera in the house...which was all folded up.  I took some on my phone but the camera stinks, so no good.

Posted by Adventure Nickel Farm at 6:49 PM No comments:

Some days are easier than others.

We arrived in the park and got set up.  After our first night we awoke to the presence of ants.  Lots of ants.  After examining our priorities as living beings we decided to come to grips with the infestation and try to live in harmony with the little creatures.

Hell no.  We killed them and impaled their tiny little bodies on toothpicks to serve as a warning to the others. During the night, it also began raining.  Now, we haven't seen real rain in around 6 months. Then it started raining in the night.

Three inches yesterday and continuing into today.  The newly designed and constructed park resembles a construction area in many ways.  And those of you who have spent any time in a construction zone in heavy rain know that it becomes a mud pit worthy of anything I could face in a tough mudder.  Sarah had to put Flo in four wheel drive just to get up the hill to get out.  A large dead tree whose roots were loosened by the rain crashed down and through a fence.  Rivulets of water turned to stream which cut ravines.

The RV has developed a few leaky spots.  The large rear window had weep holes in the bottom to let the water that inevitably gets in drain out.  Those became plugged with dirt and crap from the road which caused the slot in which the window slides to fill with water and drain into our bedroom.  So I fixed that.

The slides have canopy toppers above them.  When it rains really hard they tend to fill with water.  When a large gust of wind comes up, it lifts the topper like a sail and throws probably ten to fifteen gallons of water at a time down the side of the rv.  This leaks in around the bottom corner of one of the slides.  Not a lot, but enough to notice.  Can't fix that right now, so we just try to keep that dry.  Then there is the leading window on the living room slide.  The water from the topper above that slide drains over that window.  It has developed a leak around the base of the window frame.  I can only assume that the water is leaking in at the top where it comes draining off the topper and is seeping around the frame to drain out the bottom.  Nothing I can fix now, but I think I have a patch in place that will stop it until I can fix it more permanently.

Did I mention that the flush pedal for the back toilet comes off at random times.  Or that the flusher on the front toilet sticks and threatens to flood everything ...again.

And our cell phones don't work well at our spot.

There are days when we ask ourselves what in the hell are we thinking.  Beats mowing the lawn.
Posted by Adventure Nickel Farm at 2:20 PM No comments: