I have been to work two days already and I haven't even finished the trip reports.

We left Old Fort, where we parked for three days while we went to the Biltmore and drove to a park near Winston-Salem.  We had an unremarkable overnight stay and then drove through Richmond and into Ashland where we settled.

There, done.  That last bit was just about as exciting as I made it sound.

No, no, no, I haven't forgot about the mistake post, I will get to it.  First I have to adjust to this new schedule.  Getting up at 0530-0600 is hard after not using an alarm clock for 3 months or so.

I had to post a finish to the trip though as we are probably going to Monticello tomorrow and I will want to post pictures and what not.  I hate to get to far behind, so this is a shoddy little catch up.

Soon we will be back to the quality work you have begun to expect from the Adventure Nickel.  :-)

Tomorrow.
Posted by Adventure Nickel Farm at 6:03 PM No comments:

Since the government was shut down, we decided to not stop and see the closed sign at the Smokey Mountains National Park.  Seemed like we need not spend two days there, we read fast.  Instead we spent one of the extra days with Dad and one of them extra in South...wait, North Carolina.  For some reason, I couldn't get it into my head that we were in North Carolina and required frequent correction.

The roads through the Great Smokey Mountains are exactly as twisty and steep as they sound.  We were going to stop just east of Ashville, North Carolina.  Sarah had found a nice little RV park a few miles off the highway.  We crossed over the Eastern Continental Divide, and at the same time I learned there was such a thing as the Eastern Continental Divide.  Then we started the descent.  It wasn't much fun.  The grade is steep and long with three runaway truck ramps.  One of those ramps showed the furrows of recent use.  I was sweating when we got down.  First exit down was ours and it led us on to a winding and narrow country road with lots of trees lining the road.  I found the first opportunity to pull over and we let Sarah scout ahead with the smaller car.

Good thing she did.  Her first attempt at getting to the park, following the directions of the park owners, led her up the side of a mountain on a dead end dirt road with branches hanging 5 feet over the road.  That would have been stressful.  Then she found the place and had serious enough questions about our ability to get in that she drove back and took me there in the Honda.  No way.

Despite the owner's assurance that "We get 40 footers in here all the time." I declined.  Then we searched for another park.  Turns out there was another one a few miles further down the road that Sarah though we could get into.  We called, they had room, and we went. 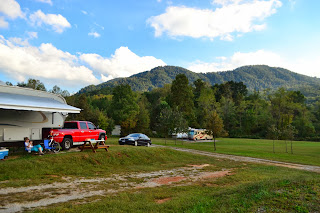 There was no wifi, no TV and little to no cell service, but we fit.  And it was close enough to what we wanted to do that we liked it.  After all the stresses of travel, we decided to take it easy.  I mean, if you had a nice, quiet scenic area like this all to yourself, wouldn't you try to relax a little? Maybe you would take the time to play some football with the kids, even if their version of football is a weird and modified tackle the man. 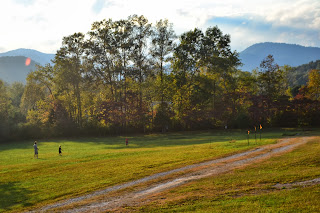 Our purpose here though, was to visit the Biltmore Estate in Asheville.  Mom had always wanted to go there and it seemed silly not to since we had the time and were going right past it. 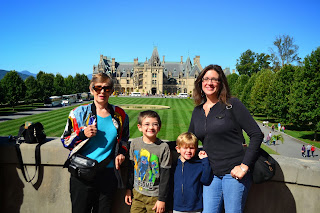 Whoever thinks there isn't an American aristocracy hasn't seen this place.  It was built by the son of the man who earned the fortune.  I won't let my personal politics get in the way too much though.  There is some interesting architecture here.  We weren't allowed to take pictures inside the place, only on the grounds.  So we didn't take as many pictures as we might have otherwise.  Take my word for it when I say that opulence doesn't really even begin to describe it, especially when you take into consideration the time in which it was built. 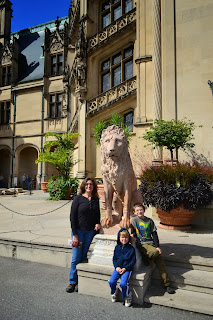 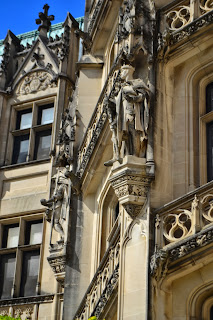 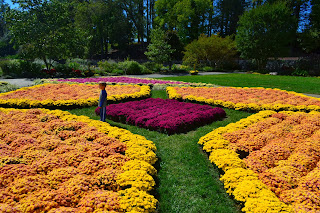 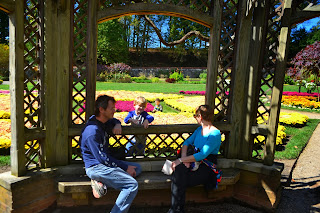 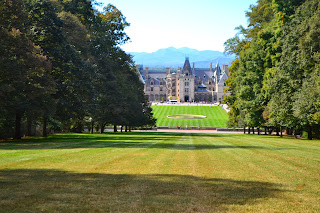 It was a neat place and a nice visit.  It was a little expensive for my taste, but Mom wanted to go and had already bought tickets.  The estate is situated on 8,000 acres of the North Carolina mountains.  The house has over 250 rooms, about a third or so of which are open on the tour.  It features a bowling alley and a 70,000 gallon pool in the basement.

It is a beautiful place.   We were tired from wandering the grounds all day so we went home to rest before taking off for another leg of our trip.


Posted by Adventure Nickel Farm at 7:11 AM No comments: