Spring is all over the place up here and we couldn't be happier.  We have had a full week of sunshine and it has been awesome.

So, what do you with a week of sunshine when it has been raining for a thousand years? Of course, we went to see a waterfall.

There is a picture of a waterfall in the hospital where I work.  It looks awesome and I vowed to go find it.  A little internet research and we thought we found it in a place called Wallace Falls State Park.

We had a bit of a drive, this place is a little northeast of Seattle. It took us two hours to get there.

But it was worth it.

There are lower, middle, and upper falls.  The big ticket item on this one is the middle falls.  We set out and started our first real hike of the year.

It was a beautiful day. The kids tolerated the drive well. They were even willing to pretend to be happy about the hike right up until we hit that first hill.

On that first hill, we realized we hadn't been hiking in a while.  There would be an adjustment period.

Luckily, the kids are troopers. We pressed on through the forest and over those lovely little wooden bridges the trails people build. We even got a waterfall preview called small falls.

The day grew warmer, the trail a little steeper, and the kids a little grumpier.  We had to fight a little harder and cajole a little better, but we kept at it. 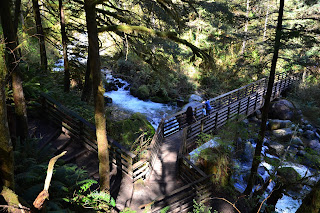 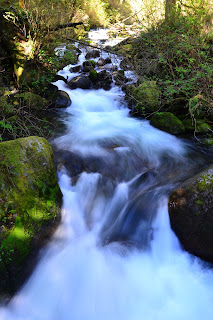 After an hour and a half, we made it to the lower falls. There is a picnic pavilion. We didn't bring a lunch though.  Maybe next time.  I can think of worse places to have a picnic.


After a brief pause, we got back on the trail and continued on to the middle falls.  More trail, more up, more cajoling.  We did find the occasional distraction.

After an hour and fifty-two minutes, I checked, we made it to the middle falls overlook.

In the picture from the hospital, there are people sitting down close to the base of the falls.  That would have been fatal on this day. 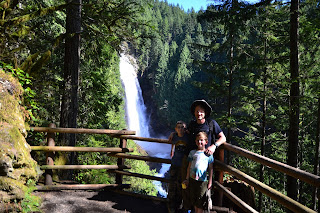 Then it was time to head back, and down.  For some reason the trip down seemed easier.


Then we passed this one bench, and the light was perfect.

An hour later, we were back to the car and finished with our first hike of the season.  It was good, but we need to work on our fitness after a long winter of not doing much. We hope to have lots of adventures to share this year. 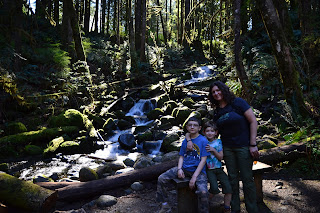 Posted by Adventure Nickel Farm at 11:08 PM No comments: