The park here in Tyler is an interesting situation.  This guy retired and decided to build an RV park near his house on an undeveloped piece of land.  21 sites on 5.2 acres.  We are the first guests.  With our travel experience he is picking our brains about how other parks run and things he could do.  Neither he nor his wife have ever spent time in an RV.   Should be interesting.  He chose a multi-level wooded lot for the park.  It suits us just fine.

Today marks Sarah and my 11th anniversary.  What a strange and wonderful trip it has been.  I'm glad I found someone whose crazy so well matched my own.  I love you.

It looks like the internet connection here might be good enough that I can update the website and start posting some pictures on the blog again.  That will be nice.  Tonight though, I am going to work on finishing the AFO challenge piece I have been working on and just relaxing.


Posted by Adventure Nickel Farm at 8:11 PM No comments:

A nice relaxing day in Albuquerque.

Yesterday's drive, thankfully, was uneventful.  Woke up, drove for several hours and then parked.  Just like in the manual.

Today we took the day off from our travels to enjoy Albuquerque.  We have been through here a few times and enjoyed it every time.  The city is scenic.  It has a distinct culture and history.  There are mountains and the Rio Grande runs right through it.  And the sunsets are awesome.  Granted, we have only seen a half dozen of them, but they have all been beautiful.

We met up with Sarah's cousin today and he took us out to lunch.  Thanks Russel.  Neat guy and interesting.  He is a Chef at a local restaurant chain.  Great conversation and good beer was the order of the day.  That's the good stuff. 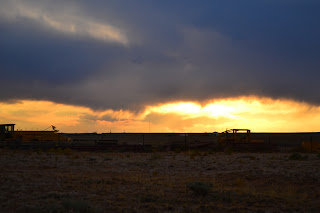 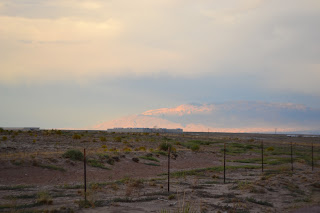 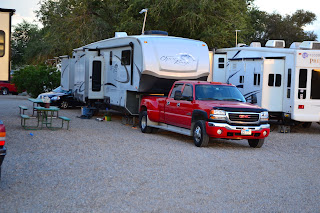 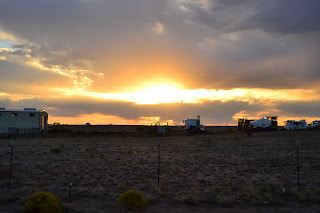 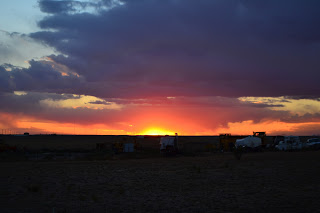 Posted by Adventure Nickel Farm at 8:05 PM No comments:

The beginning I suppose, that usually works.

Last night we sent swimming at the RV park pool.  It was nice when, after dark, the temperature dropped into the 80's.  When we returned, Sarah remarked that when we arrived at the park yesterday and opened up the door, it smelled like spoiled milk.  We started to worry about the refrigerator.  Nothing to do about it right now though, just go to bed.

Woke up a little before 8 so that we could get on the road a little early to try to beat the heat a bit. Got up, went through the morning routine and got ready to roll.  We needed to stop and fuel up before we left though as Needles is kind of in the middle of nowhere and I wasn't sure how long it would be before we would find diesel again.  The Mobil station charged 5.09 per gallon.  This is the highest I can ever recall paying.

While we were pumping the liquid gold, a man from a tire shop next door came up and said, "I hate to be the bearer of bad news, but you have a tire that's about to go and rip up your fender."  My first thought is, "I just bet."  Call me a skeptic, but the guy who sells tires is sorry to tell me I have a bad tire.  Either way it isn't true.  Unfortunately he was only lying about being sorry.

The tread was starting to separate from the tire.  I had only changed two of the tires on IRV while we were in Santa Maria because they are so stinking expensive.  I had hoped to make the trip to Texas on the other two, which looked OK when we left.  Nope.  So the guy tells me he just so happens to have some of those exact brand tires for sale.  Right here.  How convenient.

Except he wants twice what I paid in Santa Maria and double the balance and install charges too.  Yikes.

I told him there was no way I could or would pay that price unless it was a dire emergency.  Sarah got on her phone and found several tire stores in Kingman.  Two of them were even open on Sunday.  One quoted us a price about the same as what Needles guy wanted.  Sarah told him they weren't so expensive last time we bought tires and he replied something along the lines of gosh, when gas prices rise so do tire prices.  They are both petroleum products.  Not to double in two weeks they don't.  So we called the other place and they had the same brand as the newer tires we had put on in Santa Maria for a legitimate price too.  All we had to do was put on the spare where the worst tire was and drive 55 miles through the 100+ degree heat towing 16,000 pounds or so.  No problem.

We stopped in Kingman and got the tires changed.  Took the opportunity to eat lunch too.  Got to see the end of the Chiefs/Saints game.  Still paid more than I wanted to.  That adds up to six new tires in the past month.  Out of 14 possible.  Sheesh.

Back on the road we climbed.  The elevation in Needles is 495 feet.  We passed through Flagstaff and peaked out at a little over 7000 feet.  At least the temperature started dropping as we got higher.

With the added delays of tire changes and whatnot we didn't get into Meteor Crater until almost 6.  Beautiful sunset.  They are consistently gorgeous every time we come here.  We pull in to a nice level site and start setting up.  As I open up the storage area to get the shore power connection stuff I smelled the rotter smell.  It was rank.  I thought for a second that maybe it was some nasty leakage into the bags where I store the sewer hoses, but I had flushed them out pretty good last time.  So I sniffed around, not a pleasant experience I tell you.  But I did find the source of the stench.  Turns out the the several thousand worms in our compost tray system couldn't survive the 106 degree desert crossing.  Yep, rotting gelatinous worm mess fermenting in the heat.

I pulled it out and cleaned everything up.  It even wasted the compost in there as it stunk so bad.  I guess we will start over again at some point.  Sigh.

Cowboys won though.
Posted by Adventure Nickel Farm at 8:57 PM No comments: