What an interesting few days.

We had been planning our first ever hike in camping trip for months.  We acquired gear in fits and starts (Yaaayyyy REI garage sale!) and we acquired knowledge at about the same pace via books, blogs, websites and the like.  Finally, the time arrived.  A quick check of the weather forecast dampened our spirits a bit.  The remarkably dry and sunny weather was about to come to a close.  We had initially planned a one night outing, just for practice.  Then, a friend announced she could come and we pushed it out to two nights and she would be there the second night.  Then, she could make it the first night and we all decided to stay two nights.  It would be us and Ruthie and her kids.  Couldn't be more awesome...right?  Well, the forecast called for a cool down and rain on our first night and then even colder with snow on our second night.

So we worked on getting a few last minute cold weather things.  We weren't really planning on camping the snow yet.  That seemed a little more advanced a challenge than us rank beginners should undertake.  Not to be dissuaded though, we took off.  Sarah and the boys and I would arrive first and find a campsite.  Ruthie, driving from much further away, would find us.

And we were off.

The trail skirts around the side of table mountain and then into the valley behind.

We got down and passed the first camp area.  It was full.  So we decided to hike further and see if the next was full...it was and the next, and the next.  Camping is first come, first served and you are only supposed to camp in the designated areas.  So we hiked back again to the first lake and found a designated camping area tucked was up and far back from the water.  By that time, we were just glad to find something.  We set the kids out to watch for Ruthie and the gang while Sarah and I started setting up.

I was too busy figuring everything out to take many pictures of the set up.  Before long, Ruthie and Co. arrived and all was furious activity to get everything together before dark.  We got it though.  Then it was time to cook.  Sarah had pre made tons of food for the trip.  All we had to do was collect and boil the water.  We even had a little surprise.  It was Ruthie's birthday! 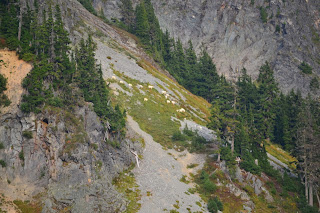 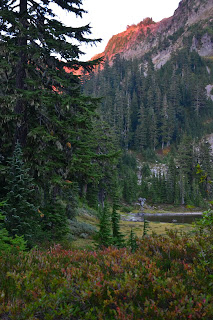 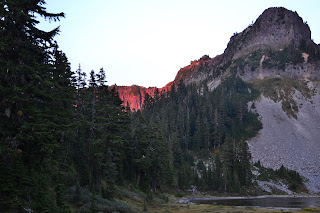 We cooked and ate and got ready for bed.  While we were eating, a headlamp walked into our campsite and asked if we knew of any other campsites in the area.  We told it we didn't, but they were welcome to come into our area, there was room.  It seemed suspicious of our dogs (Satchel was with us as well as Ruthie's puppy Sweet Pea) and our two woman one man living arrangement.  It eventually left and camped right down by the water.  Not very leave no trace, but I understand.


I'm not gonna lie to you.  It was a rough night.  Several things conspired to keep us from getting any sleep.  Max's sugar level kept dropping due to the activity level of the day and we kept having to wake up and check it and then feed him something. We forgot to close the vents and had a nice, constant cold breeze through the tent.  It did indeed start to rain, heavily at times. And so on and so on.  Sarah and I had terrible headaches and were not well rested when we woke up.  Ruthie didn't fare much better.

We woke to a different world. 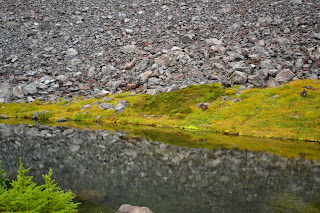 After the night we had, we decided to cut the trip short.  If it was going to get colder and less comfortable, we probably weren't ready for it.  And we certainly didn't want to be trying to find the trail on loose scree fields in freshly fallen snow.  We packed up most of our stuff and decided to hike around a bit before heading out though.  Ruthie and her kids hadn't even seen the other lakes.  So we set out.


And, being us, we searched for mushrooms.


Eventually though, we had to head back to camp and hike out.  Of course, by this time, we all felt better and the weather had warmed a bit.  We entertained thoughts of staying the night.  Alas, we had already packed up much of the gear before the hike.  It was probably wiser to leave. 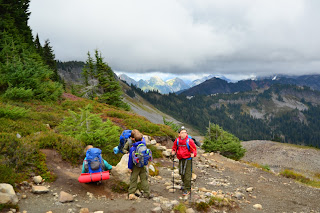 We made it back to the vehicles and drove home.  None of us felt to great.  I developed a fever for the first time in years.  The next day, the storm blew through with high winds knocking over trees and we lost power.  Luckily, in the RV, we still had house batteries and propane.  We got to keep our lights, stove, and refrigerator. I called in sick to work for the first time in decades.  We got power back yesterday.

All in all, I call it a success.  We went, we stayed and we exercised good judgement in not staying the extra night.  The updated forecast called for 9-13 inches of snow driven in by 30-50 mph winds.  With me sick on top of it, could have been ugly.  With the weather turning early this year, it might be the last chance for an overnight trip this year.  We learned a lot and will be ready for next season.