Like I said...it was a busy few days.  Lets catch up.  Now with pictures,

So after our nap when we got back from camping, Sarah and I got up and had to make a decision.  We knew we were probably going to get Michael some form of pet for his birthday, but just didn't know what.  We decided to take him to the pet store one last time and try to figure it out. OF course, Sarah and I are still dead tired.  Even Max is wiped out.  Michael is the only one that seems to have slept well.

As soon as we get there, Michael heads straight for the fish.  He really wants a fish tank, but life in an RV isn't conducive to a fish tank.  We let him look while we go try to find something more suitable.  I am convinced a Bearded Dragon is the right way to go.  Sarah isn't so sure.  Eventually we steer Michael away from the fish area and over to the reptiles and amphibians.  IT was really cute seeing him check the prices before getting enthused about any of the critters.  They had a tortoise for sale, priced at $110.  Michael stopped in front of the cage and said, "Ohhhhh no.  I do NOT want the turtle.  Too expensive."  We convinced him to stop looking at prices and start looking at what he wanted.  Either Sarah or I gently suggested he could even get a bearded dragon and his eyes grew wide.  He grabbed the little stool and slid it over because the tanks with the bearded dragons were on the top row.  He went face to face with the cage that held the youngest of the dragons and started looking.

Most of the dragons sat completely still, basking on a branch or rock.  There was one, however, that walked right up to the front of the tank and went nose to nose with Michael.  Michael turned his head, looked at us and said, "This is the one.  I think he chose me.  His name is Ned."  Michael said he didn't know why his name was Ned, that was just the name that came into his head when he looked at him.

So we were now getting a bearded dragon.  Turns out there are a lot of accessories that are needed when you purchase a bearded dragon.  After a crash course in dragon care we left the pet store with a new family member and a wallet cramp.  The whole way home Michael sat with the tiny cardboard box in his lap occasionally talking to Ned.  He was almost quivering with excitement.  We got home after the kids bed time and started setting everything up.  I had to work the next day and I wanted to be a part of the whole thing, so we pressed on.  Eventually we got Ned set up, the kids washed and in bed with their new reptile tank night light.  As I left the room for the last time that night I heard Michael whisper loudly to Max, "Can you believe that we are going to sleep with a REAL DRAGON in our room tonight."  Happy birthday kid. 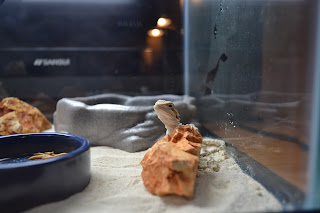 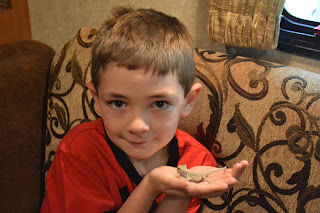 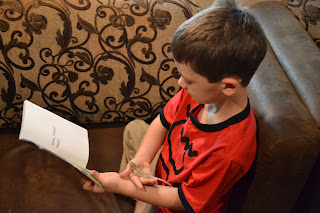 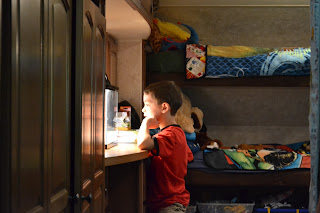 Posted by Adventure Nickel Farm at 10:08 AM No comments: