OK, so I am going to cheat a bit.  Yesterday was busy, so I am posting today to talk about yesterday.  Today was just a day.

Yesterday however, was the King Neptune ceremony for crossing the equator.  So, I'll talk about that.

We actually crossed the equator for the first time on the way down obviously, but for some reason they wanted to hold the ceremony on the return trip.  I told them that the kids and I were pollywogs. They weren't interested in the kids and couldn't have any participants that weren't actually HAL employees for insurance reasons.  I get that now.  And the kids wouldn't have done well anyhow.  At least they got to watch me.

So, the only thing I know is to go to the Crow's Nest on deck 10 at 0930.  Being me, I show up a little early.  On the advice of one of my coworkers who apparently didn't know anything, I changed into my white shirt uniform.  When I arrived, they sent me back down to change.  So I changed into my work scrubs and white coat.  When I get back up there, the other pollywogs have largely arrived and they are all wearing shorts and bathing suits and such.  Once there, they wrapped a plastic chain around our wrists.  thusly lashed together, we were paraded around the ship and back to the aft pool area. 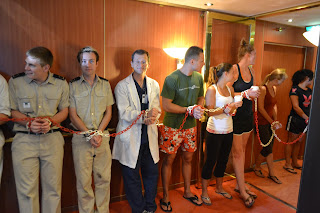 Once at the pool, they led us to a large cargo net and had us sit underneath it while they threw buckets of ice water at us and the crowd boo'ed.  A funeral dirge played over the loudspeaker.  Sarah and the boys managed to find a seat even though many of the spectators had camped out since 6 am to be front of the line for the spectacle. 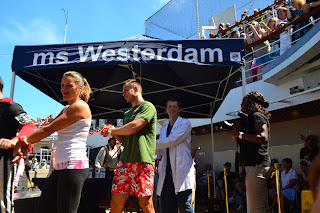 They took us out from under the nets in small groups and read a bunch of trumped up charges.  I was charged with replacing the motion sickness pills with viagra.  And I thought no one knew.  Then we were forced to kneel while they threw more water on us and the crowd was prompted to chant, "Kiss the fish".  Then the judge, who was totally corrupt I tell, ya, read the verdict.  They drug us over and made us kiss this huge fish before they lifted us up and threw us down onto plastic card tables. 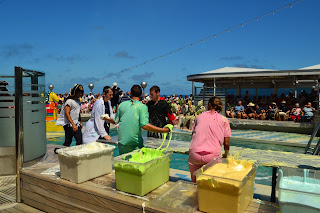 They drug me along, conveyor belt style, applying a thick layer of gooey, slimey, smelly, and yet oddly colorful, foodstuffs into ever cranny, crevice and earhole they could reach. 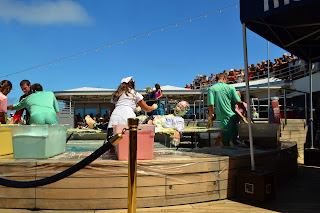 Then they turned the corner and hit me with the rotton bananas. 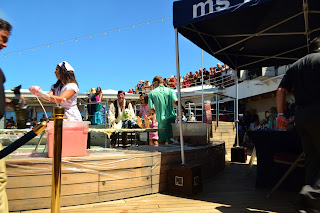 At this juncture of the rigged proceeding, the staff officers were asked if we should stink or sink.  If they said stink,  your group was made to sit at the side of the pool while all this goo dried and crusted over.  If they said sink, you were tossed into the pool to marinate in the now opaque and frothy water.  I got sink.  Pretty lucky actually.  Eventually, we were all tossed in. 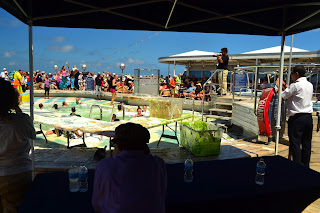 Then it was a quick shower and back to work.  I was first call today.  Laura watched a very busy clinic so I could be a part of the fun.  I think I was grateful. 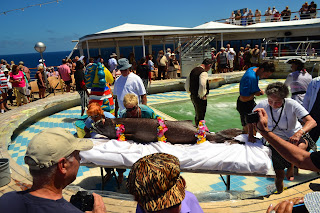 That was one sexy fish.
Posted by Adventure Nickel Farm at 11:49 PM 2 comments:

Sometimes you just get lucky.  Something weird happens and it comes out in your favor.  Today was kind of like that.


Yesterday I was first call and a man comes in to the infirmary to be seen for a cough/cold.  During the routine vital signs something is noticed that is critical and requires the man to be immediately disembarked.  Of course, we were at sea yesterday and couldn't.  So, we spent a good portion of the evening working with the local travel assistance/medical evacuation team.  We had already done several successful disembarkations with them.  This one wasn't going so well for reasons I can't really mention.  In the end, after several hours of working on it, we called in a U.S. based air ambulance company we have worked with before who agreed to fly in from San Diego.  They rock.

So, instead of having the local people come out, possible in their own boat, and transfer the patient over, we had to do it.  This was somewhat problematic because Nuku Hiva is so small that there is only one spot on the pier to which a tender can pull up.  And it was low tide causing about a two foot step up to be taken.  Our tendering operation was taking a long time.  So, we had to arrange a priority tender just for this medical evacuation.  Well, he had to be escorted over by medical. Since there would be room on the tender, I was allowed to take my family on and go ashore early.  Cool.

So, we get the guy ashore and off to the local hospital.

When we arrive at the pier we were greeted by a line of school children doing a Haka for the arriving passengers.  It was brilliant.  I have some video I will share some day soon. 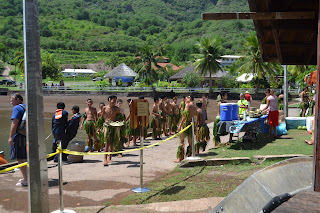 They set up the drums and the arriving passengers walked a gauntlet between dancing and chanting kids. 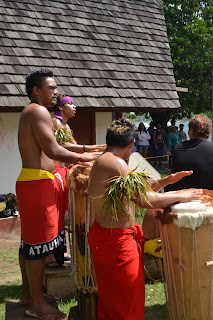 You can see that the kids just hated all the attention. 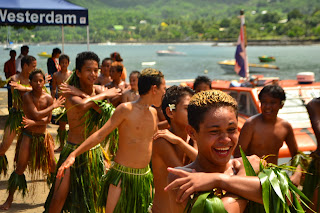 After dancing, the kids went off to school.  Apparently this was their last show of the day.  We were lucky to catch it.

You could rent a horse ride along the beach.  This is one of the young ladies taking care of her horse. 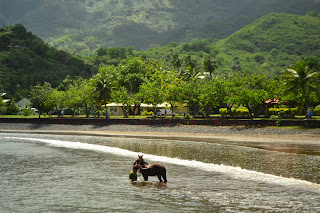 So we went to the little market area that seems to arise at every cruise port.  The people there were busily hand crafting and selling their wares.  I finally broke down and bought my own little trinket souvenir:  A little tiki pendant. 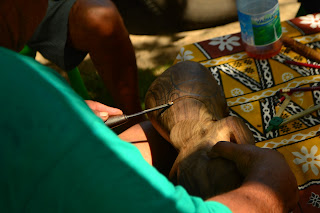 Then we wandered around and found some tide pools.  The only real problem was the oppressive heat.  Man it is hot here, the ocean breeze was what kept us alive.  I am happy we decide to do this instead of our original hike up the mountain because of the heat.  We didn't have time for a long hike either. 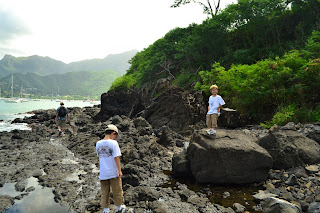 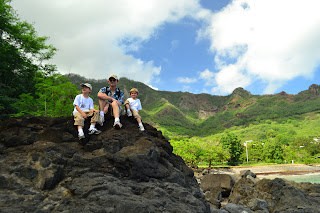 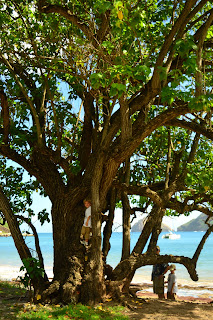 Then we paused in the market on the way back to the ship.  Note the Tiki in the background. 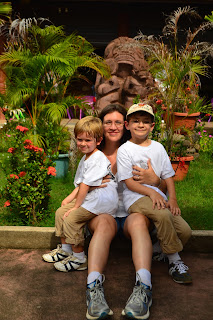 It was a fun day on a beautiful island and a memorable send off to the South Pacific.  When we made it back to the ship we discovered that due to the long tender times, no crew had been allowed ashore.  Only the doctor, his wife, and us made it ashore. 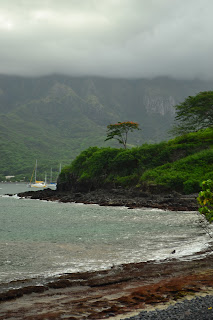