I have been wanting to review some of the pictures from my cell phone camera and this seems like a wonderful time for it.  I have been working quite a bit so that I could have this stretch of five days off so I can run the Santa Fe Thunder half marathon this Sunday.  We had visitors again last week and it seems more fun to visit than it does to post.  Now, back to some pictures.  All of these came from my cell phone.

We were lucky enough to be in Santa Fe at the beginning of the fiesta season.  This area has been occupied by native Americans for thousands of years and the Spanish came here a long, long time before pilgrims landed on Plymouth.  The history here is amazing.  The fiesta season is a holdover from the days of Spanish rule.  The season is a three day celebration of the retaking of the city by Don Diego de Vargas in 1692 and the fiesta has been held since 1712  The kickoff to all the festivities is a little younger and started in 1924 with an artist named William Howard Shuster.

This year for the 89th Zozobra festival, Sarah and I arrived an hour or so before sunset to Fort Marcy Park near old downtown Santa Fe.  The park was crowded, but there was still some room.  We got our first glimpse of Zozobra, AKA Old Man Gloom.

The park is a baseball field.  We made our way closer and stood on the infield dirt waiting for the festivities to start.  There were  young children riding the shoulders of their parents.  Fair type food was everywhere, the usual suspects: turkey legs, funnel cakes and the like.  I didn't see any beer vendors, but a few folks may have managed to sneak in a flask or the like.  There was a stage with multiple bands.  Good, clean family fun.  Every so often an announcement would go up over the loudspeaker reminding you to get your glooms in.  They had collection boxes where you could write your sorrows on a piece of paper and they would be collected and put into Zozobra, which is Spanish for anxiety.

There are children dressed as Zozobra sprinkled throughout the crowd.

There are ceremonies re-enacting Don Diego de Vargas' reentry to they city with a festival queen and speeches.

We sat and listened to the bands singing Spanish music and waited for the sun to go down.  There was quite a crowd. 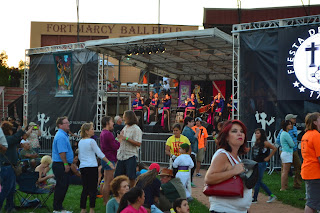 As the sun went down, lights reflected on Zozobra and the crowd grew restless.  A  contest winner took the stage to start the chant, "Burn him!"  As one of the festival goers had said earlier when she heard it was our first, "It gets a little weird."

First, the children got into the act.  They are dressed as little glooms that lead Zozobra to a party he is told is in his honor.


The lights dropped out and Zozobra was bathed in an eerie green light.  This was accompanied by a forward rush worthy of any good rock concert.  That's why the picture is so blurry.

As the kids start dancing in a procession toward and around Zozobra, the sound system kicks in and moans and groans spill out while he waves his arms about.  His head turns and watches the children while his mouth opens and closes.

Then the torch bearers arrive on the scene while the little glooms exit. 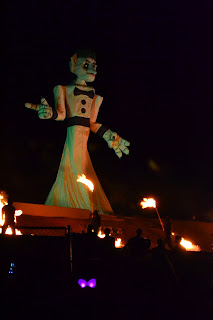 Zozobra is not happy about the torch bearers and his groans and gesticulations show that.  Soon, however, the fire dancer arrives.  She seductively taunts and teases him while he waves about and groans. 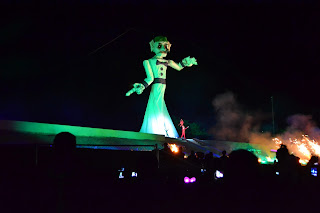 Then the fireworks start.  While the fireworks are going off, the fire dancer continues to dance more and more frantically.  Drums start pounding over the PA system. 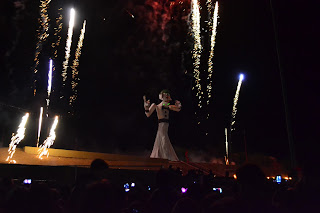 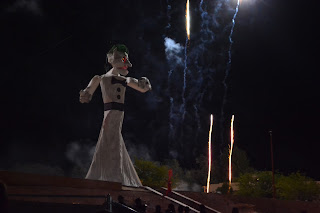 As the dancer exits the stage, the fireworks increase in frequency and intensity.  The drums grow louder the groans reach a fever pitch.  Then the fireworks start inside Zozobra.  The groans turn to screams. 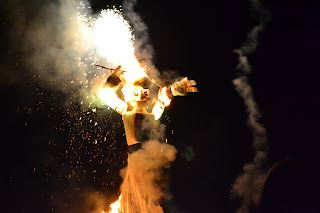 A picture is worth a thousand words, but video...well video tells the story.  Sorry about the focus problems at the beginning.

I couldn't get the video to embed, again, sorry.

The burning didn't take long, just a few minutes.  He continued to writhe and scream while the crowd cheered and chanted.  When he finally collapsed and fell the the ground, the fireworks finale started.  Shortly after, the lights came up and everyone started heading to the gates.  It was a wild and weird experience that was more intense and primal than I expected. 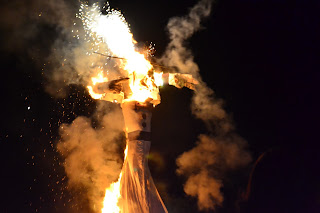 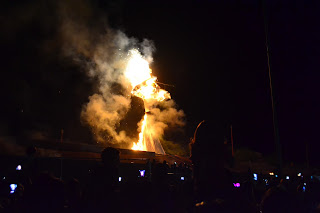 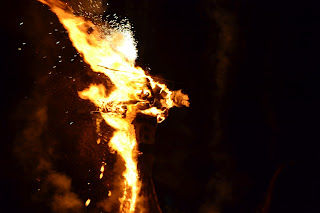 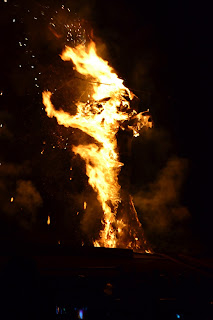 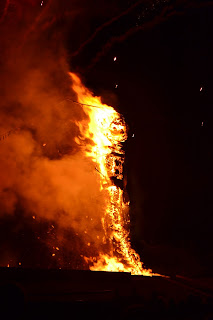 If you find yourself in the area in early September, you should pay a visit and watch the burning of Zozobra.  It is a unique and fascinating cultural event.


Posted by Adventure Nickel Farm at 8:29 AM No comments: