I went for a run today.  Did my standard run to the park, workout, run home route.  When I visited Dad, I checked the soles of my Vibrams and came to the conclusion that I was still running on my heels too much according to the wear pattern.  So I have been concentrating more on my form.  Today I finally really felt like I had it down.  I was landing on the ball of my feet, transitioning to full foot as my weight moved forward and then levering my foot up using my calves. It felt like my legs were spring loaded and there was no real sense of impact, no jar.  I got to the park in a reasonable time and then I felt it.

My calves were tight and swollen a little.  Nothing too bad, but I still had 2 1/2 miles to get home.  So I started running home.  Now, more aware of the pump in my calves, I started trying to land more mid-foot and found myself landing flat.  Thud, thud, thud, each time my foot hit the ground.  No padding.  This wasn't working well.

So I walked most of the way home.  Short bursts of running with walking.  By the time I got home, my calves felt better, but tomorrow will be the big test.

I think I will go back to my other running shoes until after the Austin Mudder.  Then I'll strap the Vibrams back on and transition more gradually this time.
Posted by Adventure Nickel Farm at 6:48 PM No comments:

We woke up to an alarm for the first time in a while.  That sucks.  Reminded me that the entire next contract will be that way again...sigh.

Oh well, back to adventure.  We drove to Central Coast Kayaks and got geared up.  First time in a wetsuit.  It was more comfortable than I thought for some reason.  Then we headed out with our guide John to the beach.  This is John's retirement job.  I thought that was great because it was better to have the older guy who does this because he loves it than the young kid who is just doing it as a summer job.  He gave great instruction and told us a bunch about the local history and geology.  Great guide.

We started off on the beach and paddled out into the ocean.  It was calm, there was a bit of sea fog and quiet.  We turned South and headed for the dinosaur caves.  Along the way we ran across tons of kelp beds, but also sea otters, seals and birds galore.  As John said, those rock aren't naturally white.  Lots of birds.

As we got closer to the caves John had us shoot a narrow-ish gap between some rocks. I think this was a test to see if we were at all coordinated enough to go into the caves.  I guess we passed, but we will never know.

We then turned and paddled into some of the caves.  It was really nice to feel the rock and sway of the ocean again.  I missed it.

The caves were really cool and much more colorful than I thought.  The ceilings were often purple and green and almost iridescent.  The sound of the waves breaking into thunder inside the caves followed us through.

We took a break after an hour or so and hung out on a beach and had a snack bar and bottle of water.  Then back to the caves.  There were a few more adventurous options John offered to us that meant squeezing through tight spaces in moderate swells.  I always took those as you can imagine.  It is easy when you are on the open water to minimize the size of the swells, but around the rocks you are constantly reminded.

We started paddling back North when Sarah spotted the dolphins.  John, being much more agile on the water, sped forward to get some pictures.  We managed to catch up and see the dolphins up close before they swam away.  We paddled through more caves, kelp and wildlife.  I have now added kayaking to the list of "Things I want to do more often.".

We came home and I took a short nap.  Then Sarah took her mom to Pismo Beach and I changed to new tire onto the RV.  IT was a really fun day. 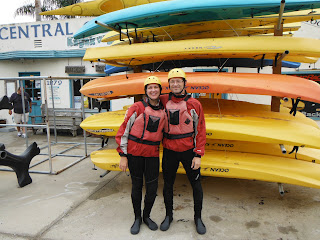 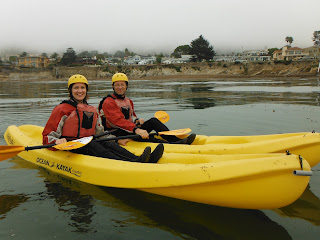 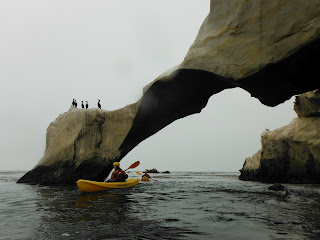 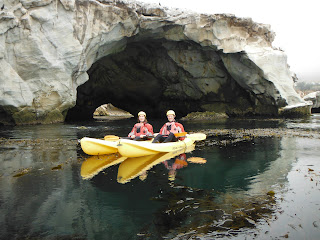 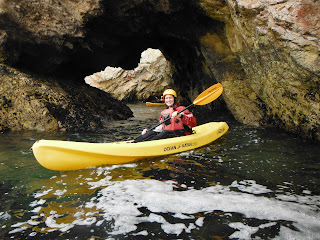 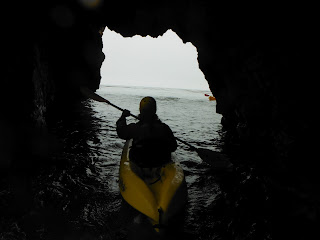 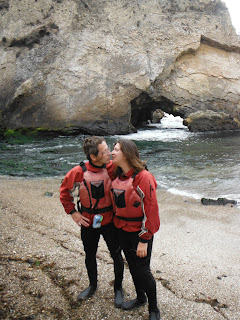 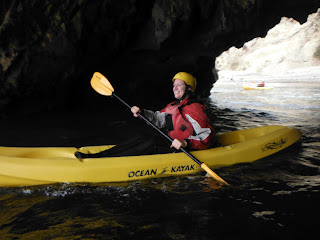 Posted by Adventure Nickel Farm at 10:45 PM No comments:

Well I spent a large part of the day elbow deep in poop.

I awoke yesterday morning to Sarah urgently calling out that the flush pedal had fallen off the toilet and the bowl was filling with water.  I managed to get it stopped and after some half assed repair attempts gave it up for the day and went to work.

This morning I took the toilet out and went through everything.  I also took advantage of the chance and used the hose to spray directly down into the tank to clean it out a bit.  Sarah kept checking on me to see if I had passed out from the fumes.  Nope, I'm an ER nurse.  Stench is part of my work environment.

Got it fixed, got the new tire picked up and the repair cable for the slide out.  But tomorrow I won't likely be doing that.  Tomorrow, Sarah and I are going kayaking in the ocean.  Her parents are going to watch the kids while go adventure.  It should be cool.  Maybe there will be pictures.

Posted by Adventure Nickel Farm at 9:16 PM No comments: