Did another run with the Vibrams today.  I think it was too much too soon.  I think I ran too far too fast the first day and didn't rest enough before trying again today.

Talk about sore.  My calves were killing me.  I shut it down before I made it home.  Still too painful.

An interesting thing happened though, before it got too painful.  It was actually fun.  For some reason running in those goofy shoes is fun.  Reminds me of being a kid again and just tearing off for no reason other than the sheer joy of moving fast.  I'm going to keep using these damn things until my feet and calves are stronger.  Just need to be smarter about it.

Went out and got haircuts today for the whole family.  If we aren't careful we may just pass for respectable.

Posted by Adventure Nickel Farm at 6:42 PM No comments:

Today was Dallas Cowboys Training camp day.  I must say I was a touch disappointed.  First, it rained.  I haven't seen rain in three months.  The Dallas Cowboys website said this was the first day it have ever rained on a training camp practice in Oxnard.  They said it only rains 5-6 times a year there.  Well, today was the day.  Also, the fans in attendance were more than a bit rude.  It appears as though there are a lot of guys there just for autographs, I guess they are selling them.  They get really cranky about space on the fence to watch the practice.  Anyway, we left before practice finished and weren't there for autographs.

Another note, should I do this again some day I think it might be better if it is just Max and me.  The largest number of our group wasn't particularly interested in the practice it seemed, which makes it harder to justify staying around through the less than interesting parts.  Now, if it were wall to wall action with cool stuff happening all the time, it is easy to argue that you can't leave.  When it is raining, you can't see much and the crowd is rather rude, it is harder to justify staying.  Especially when you have a dog at home that just might pee all over your house.  Sigh.  Oh well.  Football is better on TV.

Someone had a really good time there. 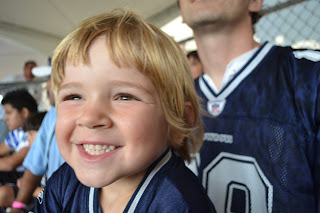 Posted by Adventure Nickel Farm at 9:18 PM No comments:

Just a quick post as a follow up to the run.  Yesterday and today had the calves very sore.  In a weird way it was good.  I can't remember ever having them be this sore, no matter the weight of the calf raises.  Seems to me like they weren't kidding when they said I would be working muscles that I hadn't been working before. It feels like the soleus more than the gastrocnemeus.  Also feels like maybe the tibialis posterior.

So, I am still deliberating on a run today.  And/or maybe a bike ride.  Sarah is out riding right now, which is good.  The sea air has been hell on the bikes and I think we may lose hers.  Oh well, they were Craigslist castoffs anyway.  Still would like to keep mine, I like it.

Headed down to Oxnard tomorrow to see Cowboys Training Camp.  I'm a little excited.  It should be really neat.

I won the AFO challenge this month.  I was hoping for a better turnout.  I hope that it was just a busy month for everybody and that this time around there will be more time for participation.  I set the challenge with a bit shorter word limit in the hopes that would give people time to write, but I know it can be just as hard if not harder to fit the same story into a smaller space.  We will see.

Posted by Adventure Nickel Farm at 6:21 PM No comments:

OK, so I was convinced to try the whole barefoot running thing.  It passes my common sense tests.  We as a species ran very well for a long time before the advent of modern running shoes.  By evolution we were designed to run and do so very well.  The proponents of the modern running shoes argued that we didn't evolve to run on asphalt.  I argue that hard baked dirt is just as bad.  Whatever.  I bought a pair of Five Fingers to check them out.  I was intrigued and figured that if I was going to get better at this running thing, I should switch now before my habits in a full shoe became more ingrained. I bought them last week and walked with them for a day or two.  Today was the first run.

First, they feel way different.  You find yourself walking as you would if you were barefoot.  Imagine.

I took them for a short run out and back with two doggy potty pit stops.  The stride is similar, but the forefoot landing is something that needs conscious effort at this point.  I didn't get the rhythmic jolt of the normal stride, but a soft spring almost like I was jogging in place, but going forward.  My time was comparable to my normal time over that distance, but my lower legs grew much more tired than normal.

It is strange, being a former smoker, my lungs had always been my limiting factor before.  This time it was my lower legs.  When I got home I immediately noticed the tightness in the calves.  They were tight and tired deep inside like the muscles and fascia close to the bone.  I massaged my calves for a while and will probably do so again tonight like Vibram recommends.  I expect to be sore tomorrow, but not injured.  I will call it a success.

Then, because the run was so short, I put the shoes back on and went for an 8.5 mile bike ride.  It was nice.  The sea air is playing hell on the metal on the bike and I have some maintenance work to do.  It's always something. 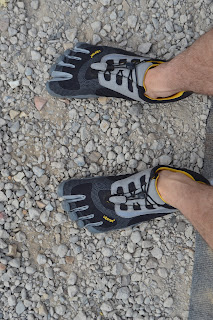 Posted by Adventure Nickel Farm at 5:10 PM No comments: