One of the big things we wanted to do while we were here is to see the cave paintings. They are excellent, about 4000 years old and pretty well preserved and documented. They are trying to get them registered as UNESCO world heritage sites. We had already gone to the Seminole Canyon site and today we went to the White Shaman site. Seminole Canyon is a Texas state park. White Shaman is on private property and is administered by the Rock Art Foundation out of San Antonio. WE had been here before, but had Sarah's parents with us and they didn't feel like climbing the steep canyons and scrambling over loose rock. Well, we did and today we went back. 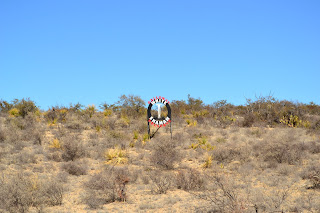 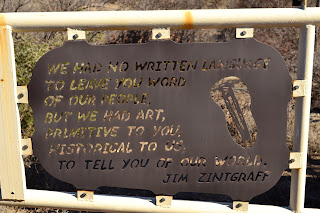 We drove down an old rutted dirt road and met up with a group forming. The tours are given by volunteers and are only given at 1230 on Saturdays. WE descended into the canyon across slick limestone and scree. The canyon is formed by the Pecos river near the confluence with the Rio Grande.

At the first stop we saw some faded red images, not the main event though. The images showed figures that appeared to link arms. They grew smaller as they went higher in the canyon. 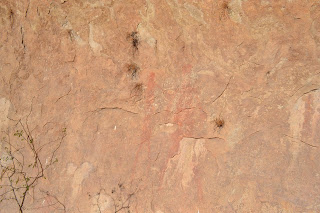 After that we followed the guide down into the main painting area. Michael stopped frequently anytime he found a fossil in a rock or an embedded shell. He is great at volunteering information to the guide and much like at the Sonora Caverns, he quickly became the junior tour guide. The paintings were very cool. Apparently they know the white shaman painting is important because they white paint is the most difficult to produce and therefore the most valuable. It is really cool to think about the people that made the paintings and the world they lived in then. 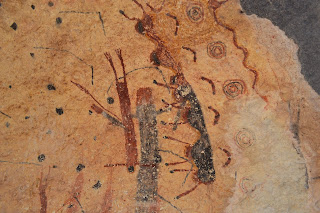 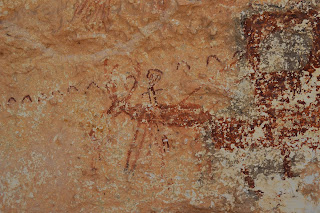 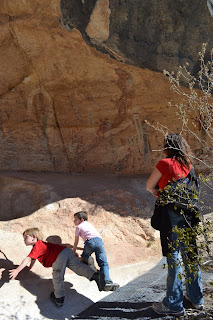 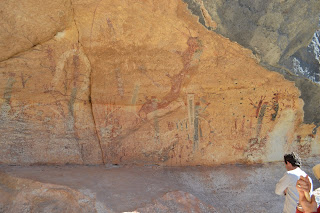 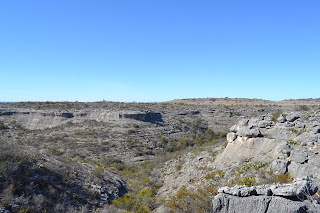 Then we hiked back out of the canyon and drove home. Max hiked the whole way by himself. That's pretty good as he usually gets carried a good part of the way. Of course, he tried to get into someone's arms today, just didn't happen for him. He had a good nap on the way home. When we did get home, we discovered Michael has his first loose tooth. How time flies.
Posted by Adventure Nickel Farm at 7:36 PM No comments:

Just read the kids a bedtime story. Then Michael wanted to read us a chapter from the Frog and Toad book. Nothing quite like having your 5 year old read everyone a bedtime story. 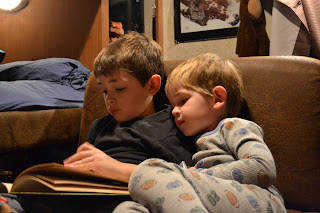 Posted by Adventure Nickel Farm at 7:15 PM No comments:

Happy New Year to everyone. We have made plans for our next destination. WE are going to Springdale Arkansas. It will get us up close to my Mom for a contract and have us in prime position to move either North or East for the next contract in late spring. It is another smaller hospital, but it sounds interesting.

There are a few things I saw when I lived in Branson, that I would like to take everyone to and I am sure Sarah will find more than enough stuff for us to explore as well. Just going to have to adjust to the cold.
Posted by Adventure Nickel Farm at 1:13 PM No comments: