What to do, what to do?  We were posed with this problem today.  Ya see, I had one day off in a stretch of 7 days and it was also the last pretty day forecast for a while.  We woke to no clouds in the sky.  Originally we had planned on an easy day at home taking care of some list items and trying to be productive, but this was the clearest day we had seen in a long time.  So Sarah started looking.  We are always drawn to the Golden Ears that we see on clearer days as we drive home.  I mean, how can you not be?

So she looked up some hikes and we decided to give it a whirl.  After all, the park is just over an hour away or so.  Why not?  At the least, it should be a pretty drive.

So we got away around noon.  Famous already for our late starts, we also had to add planning time and decision time, so this part was inevitable.  We stopped for Mexican food just before crossing the border because who wouldn't want to try the Mexican food as far away from Mexico as you can get and still be in the US?  It wasn't bad, really.

Then we were being grilled by the border security agent.  Who are we?  Where do we live?  What are our intentions in the fine country of Canada?  Satisfied with our answers, he turned friendly and started giving us some tips on where to go and what to see, nice guy.

Then it was as short drive, I couldn't tell you how long, it was in kilometers and we all know Americans can't understand kilometers.  Eventually we got to the Golden Ears Provincial Park.  It was very pretty.  We decided on the Lower Falls trail near Gold Creek.  It was a waterfall, there wasn't much decision making to be done, really.


All along the trail we played peek-a-boo with the jagged and snowy peaks of Golden Ears.  As far a scenery goes, this hike has a lot going for it.  There is lovely forest, rushing water, snow covered mountains.  It wasn't all roses though.  There seems to be a habit of people walking their dogs here.  The bag the poo, and then leave the bag at the side of the trail.  Sarah counted 20 something bags just sitting there.  I think this trail is a little too close to civilization to rate too highly. 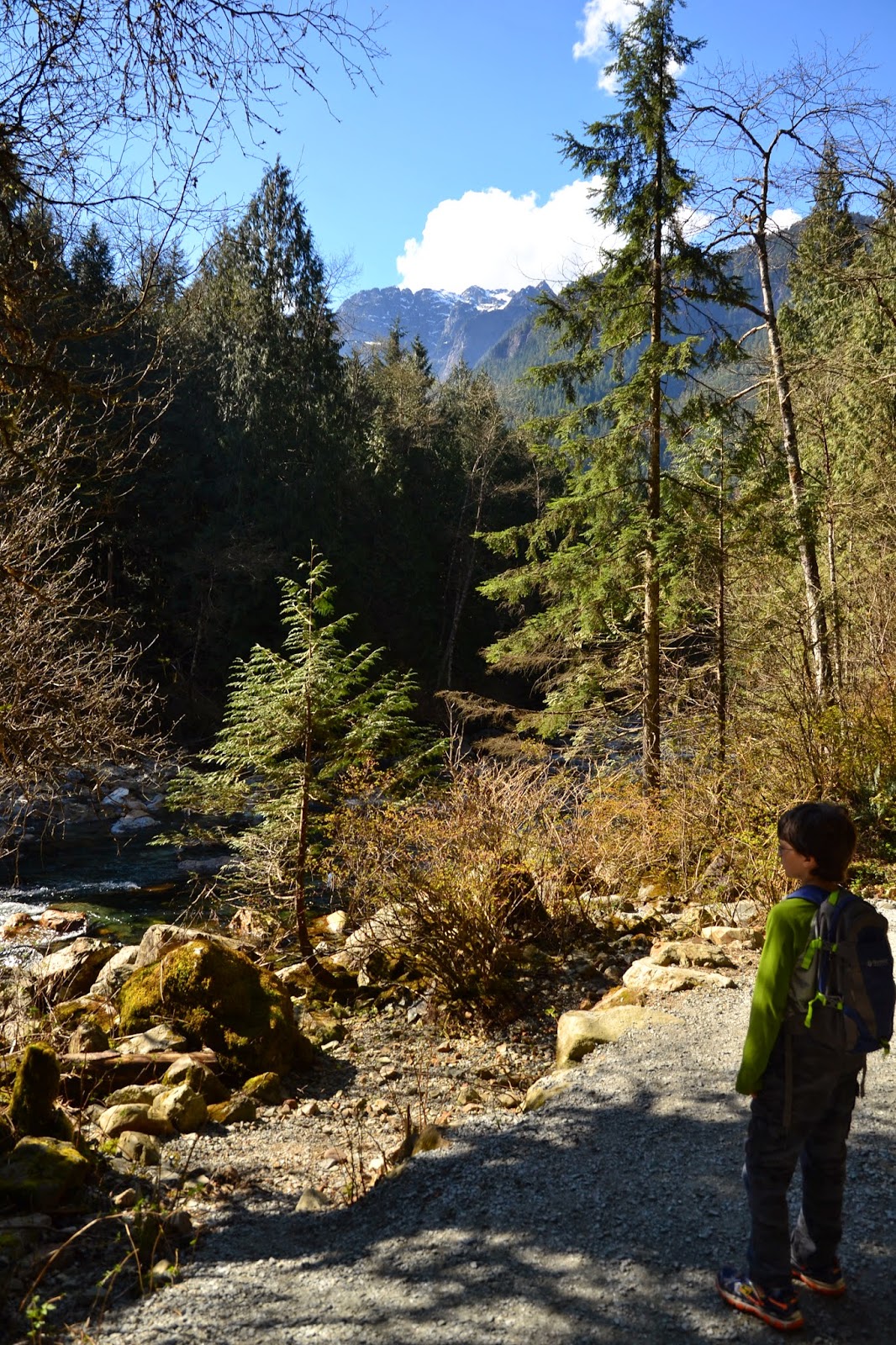 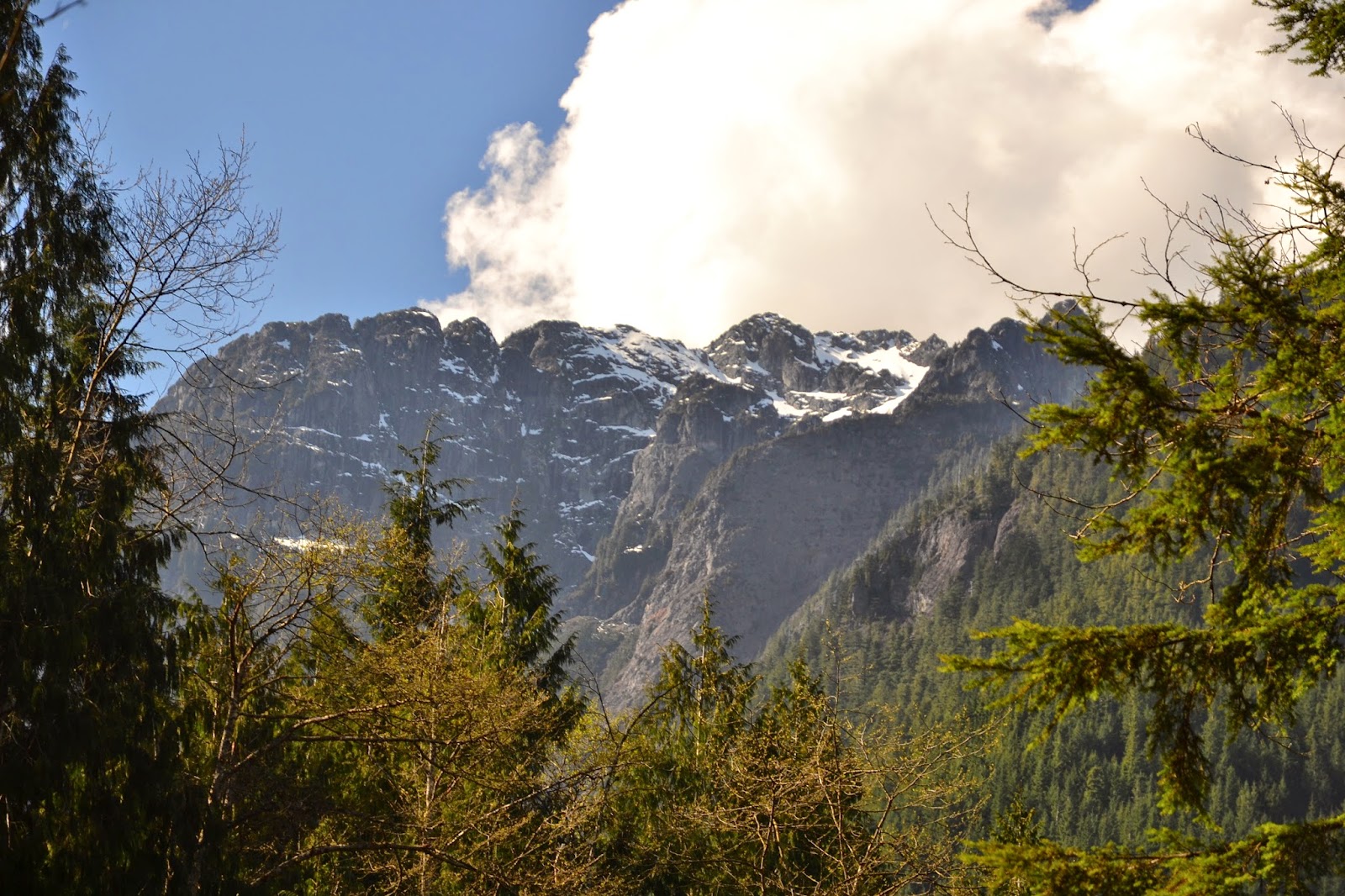 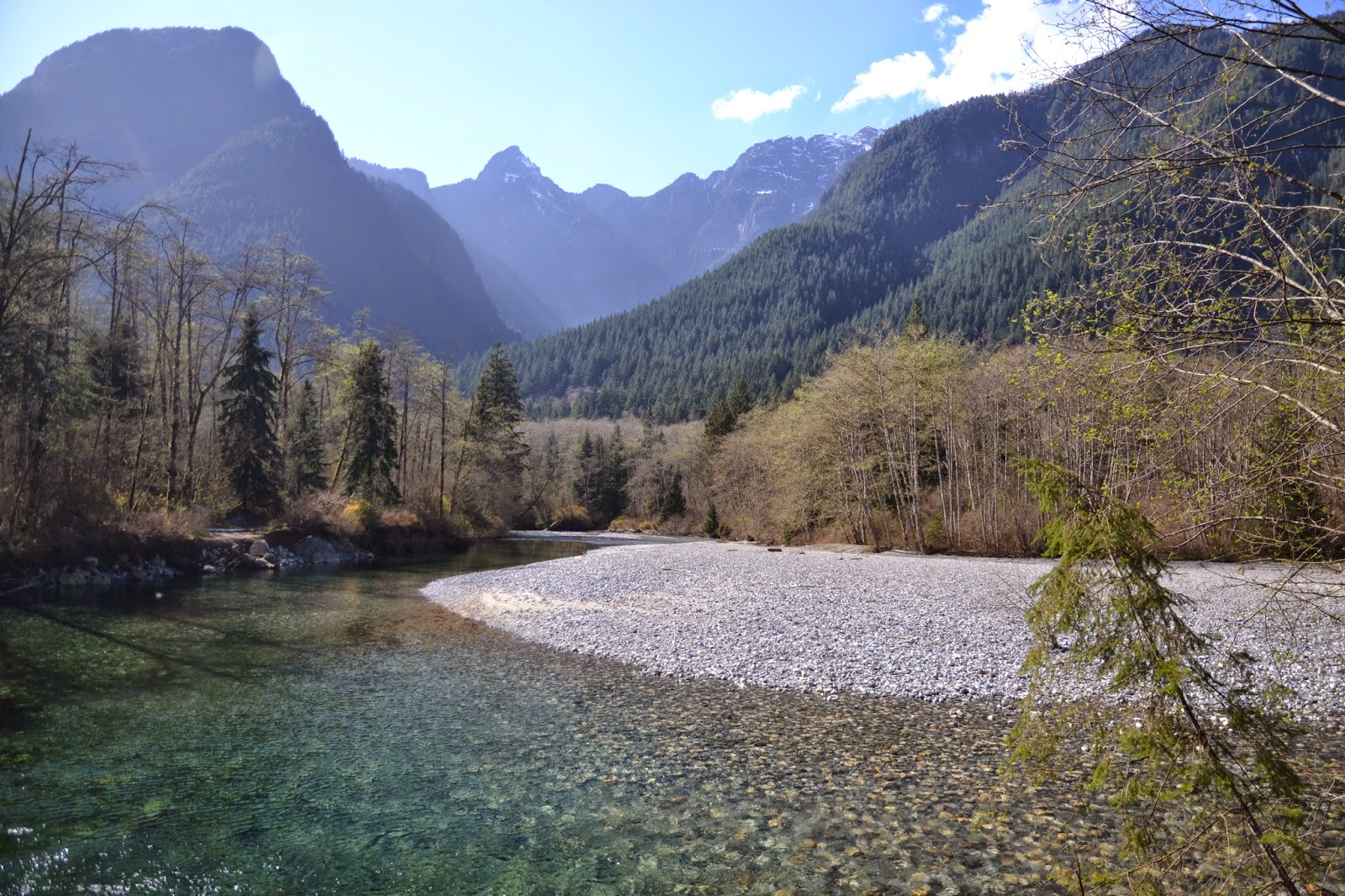 A few kilometers later, we arrived at the Lower Falls.  It is one larger waterfall followed by a smaller set of cascades, it is really a cool place where we could romp around on the rocks some.  You will have to forgive me a little.  I went a touch crazy taking pictures.  I think a few of them came out pretty well. 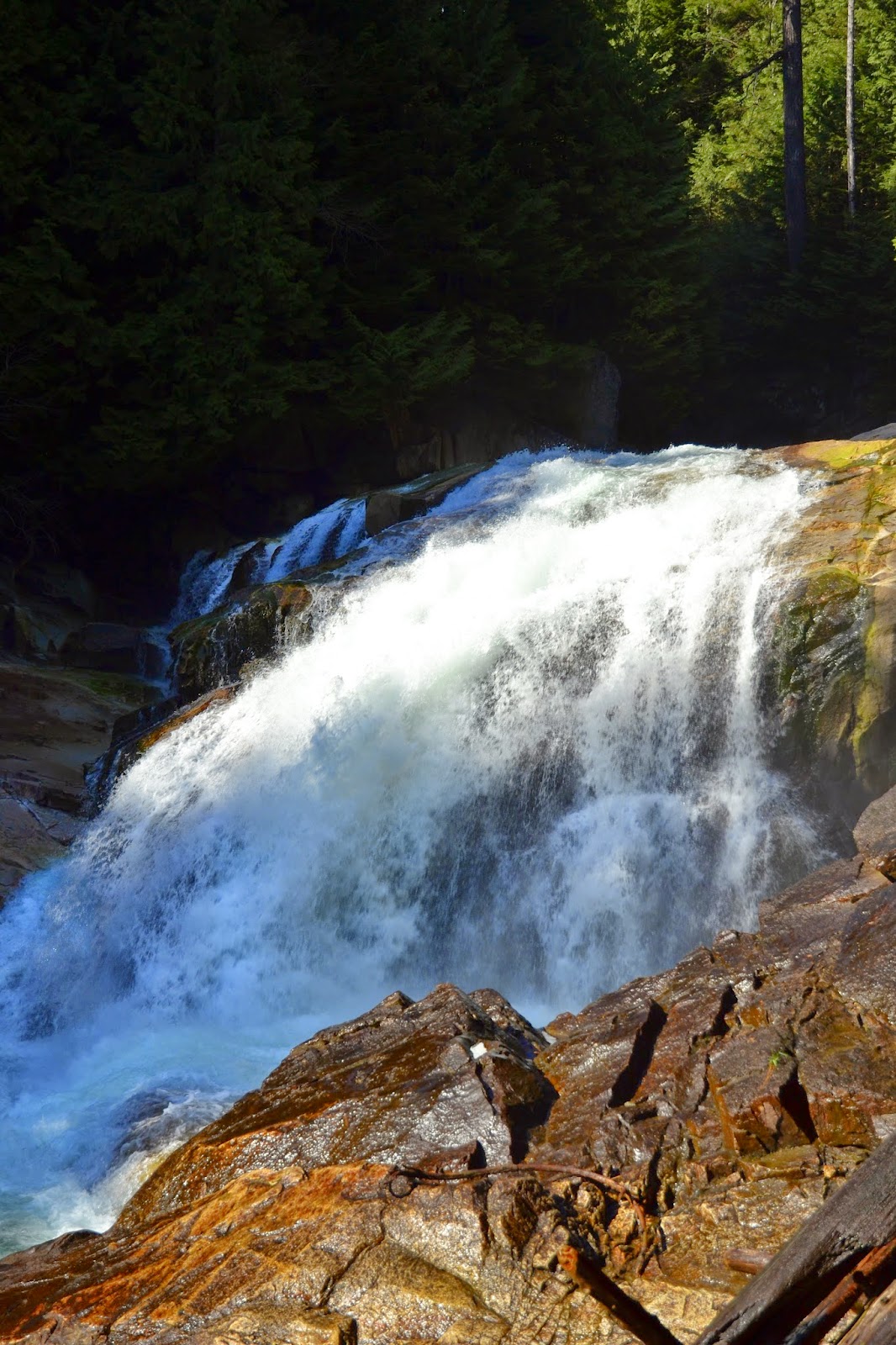 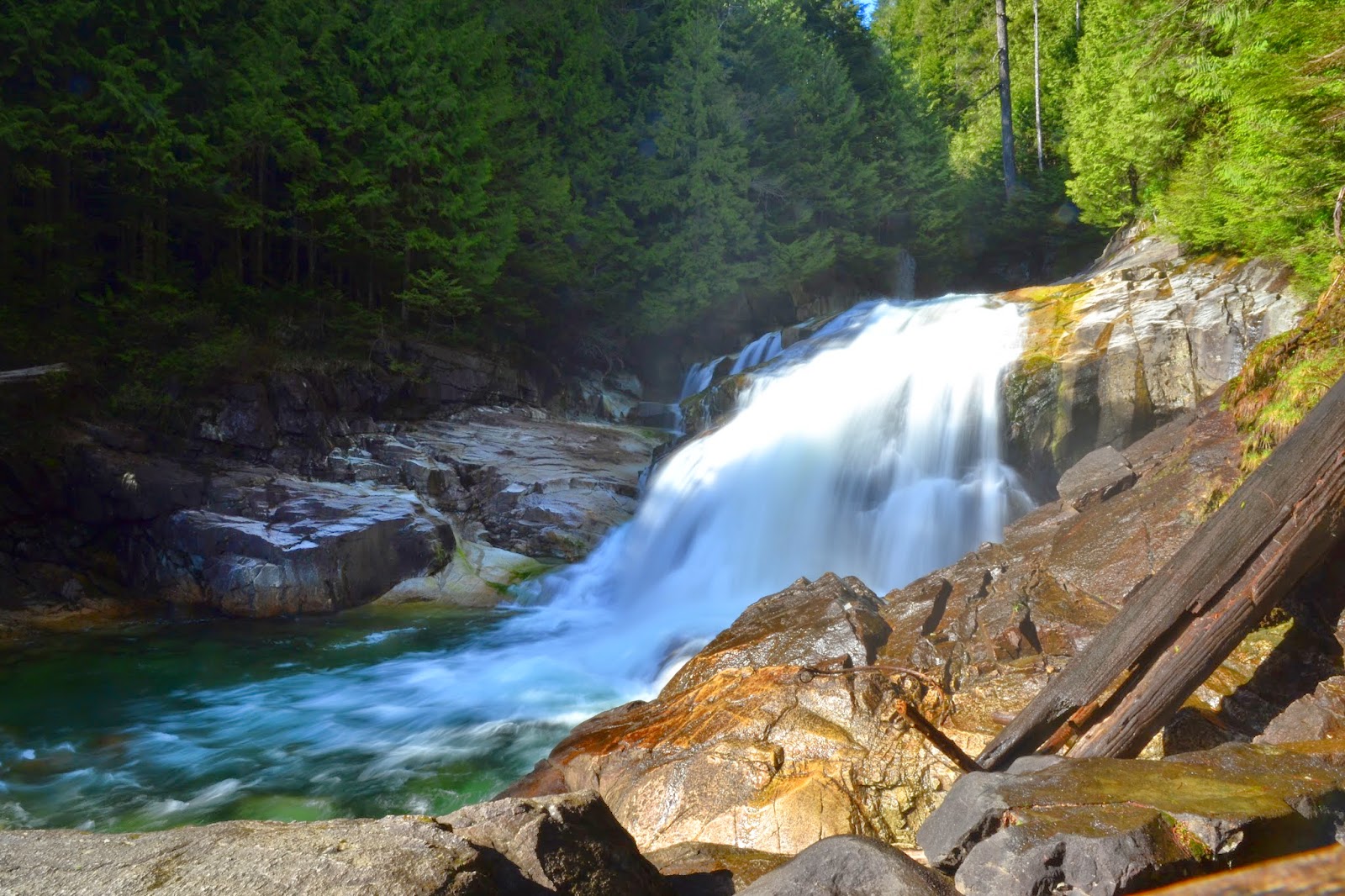 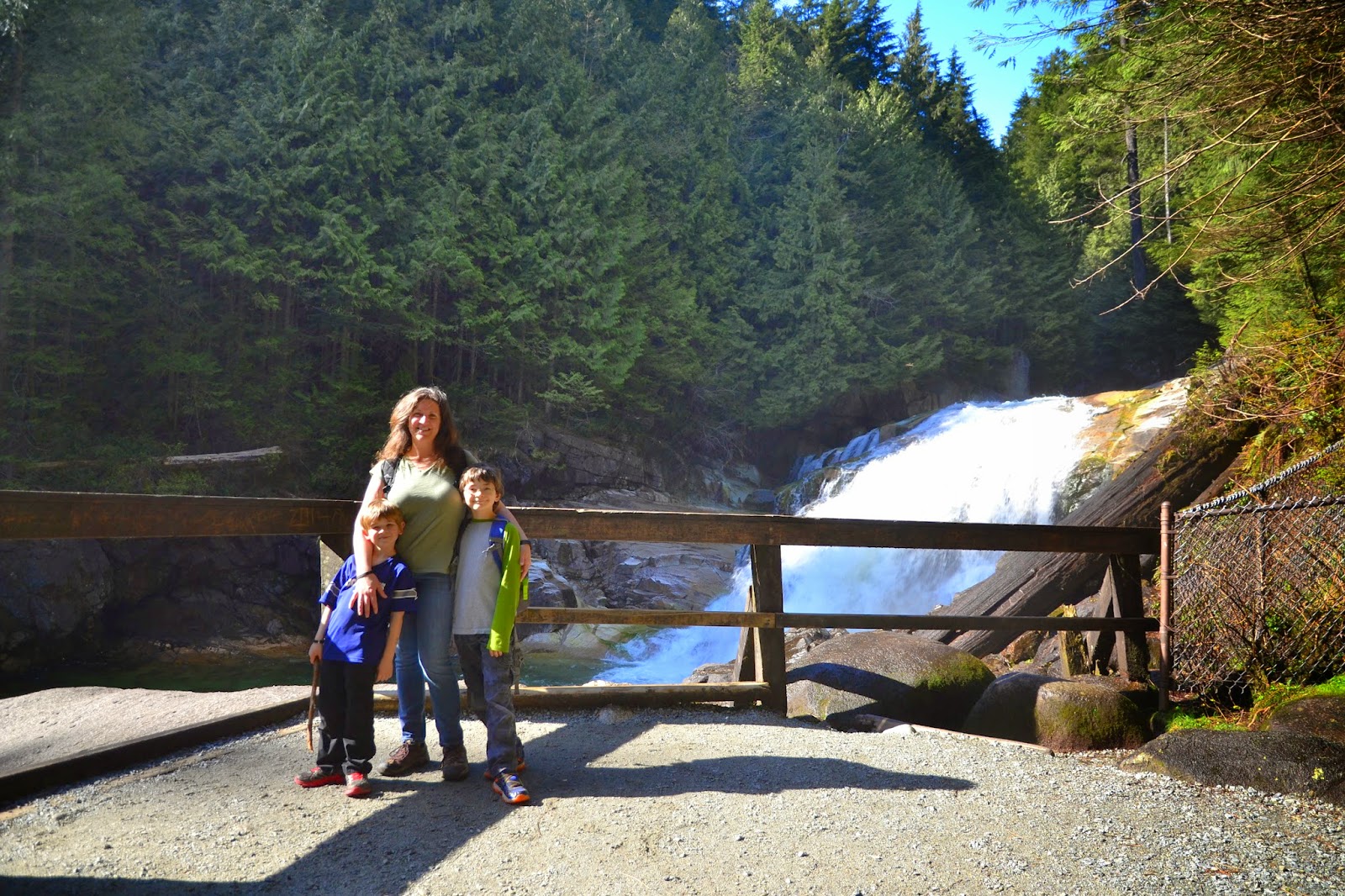 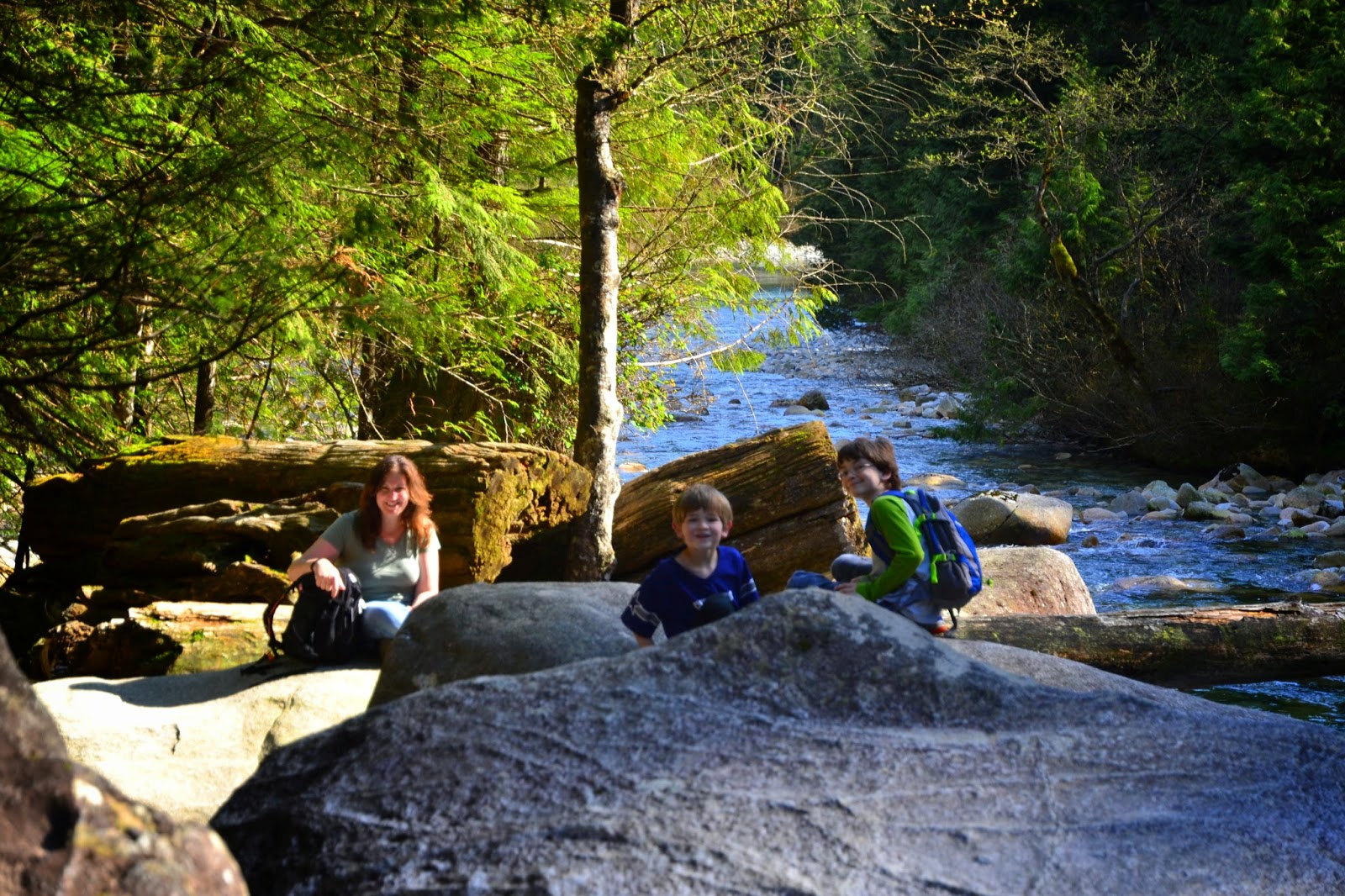 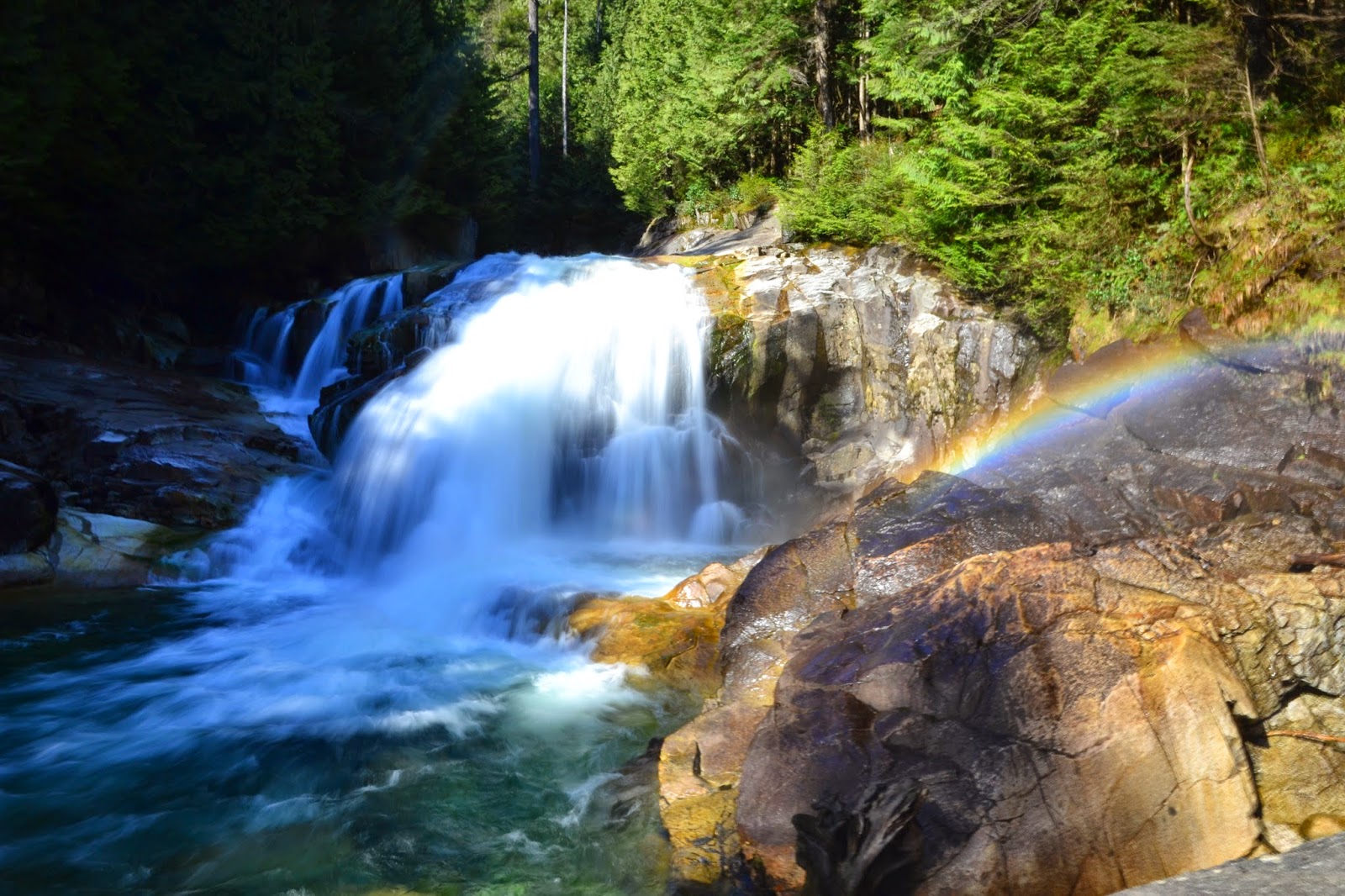 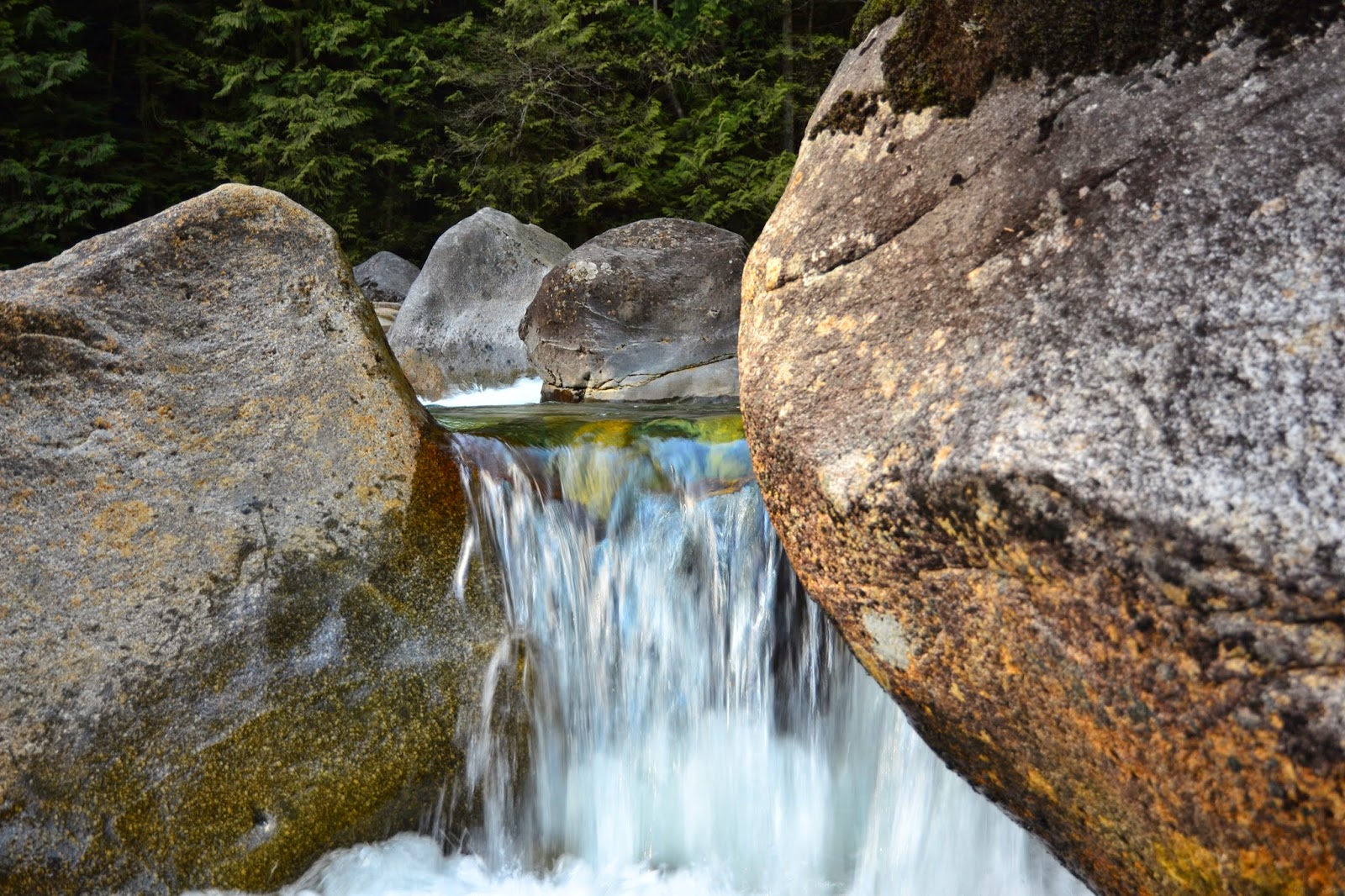 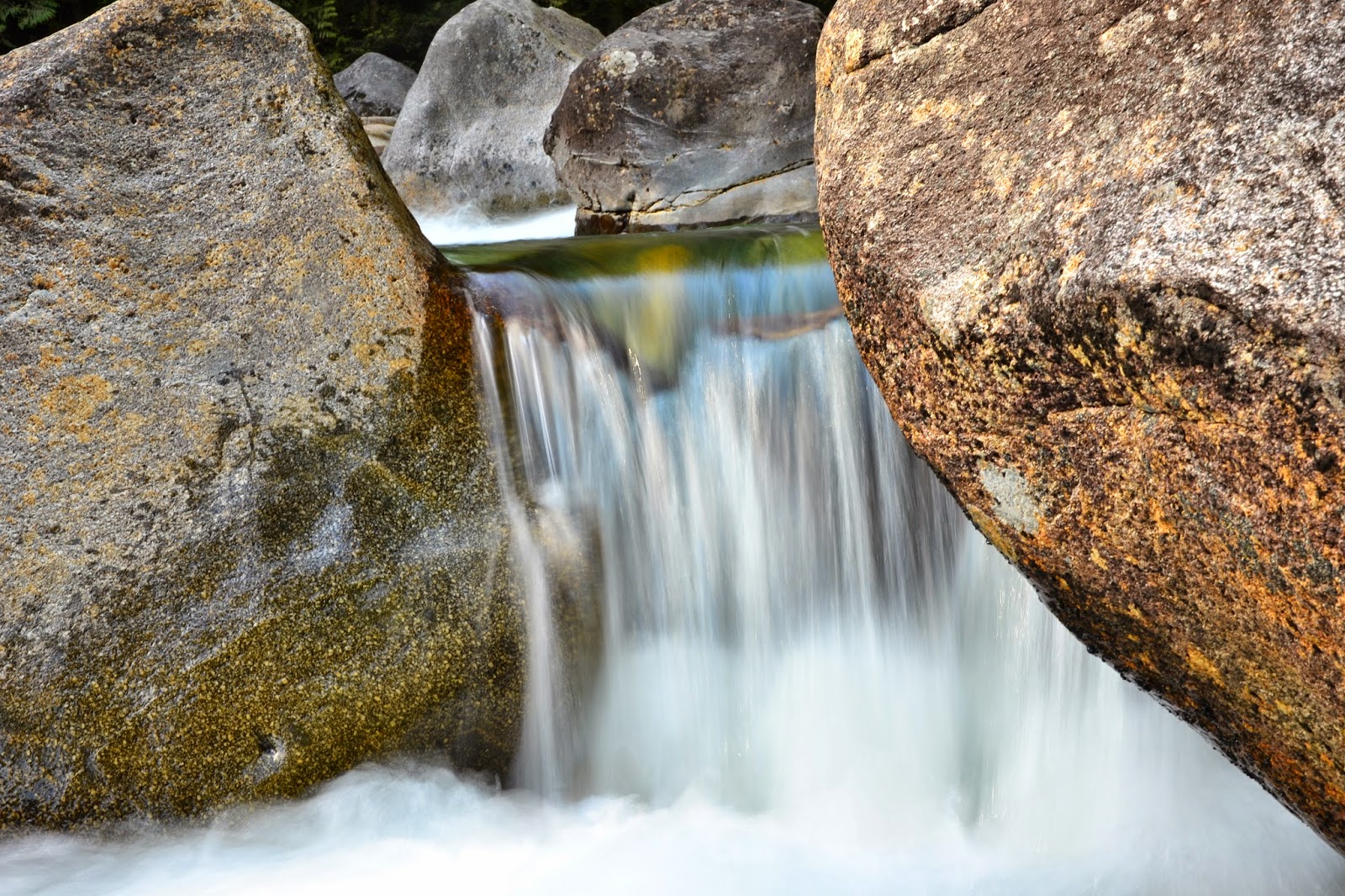 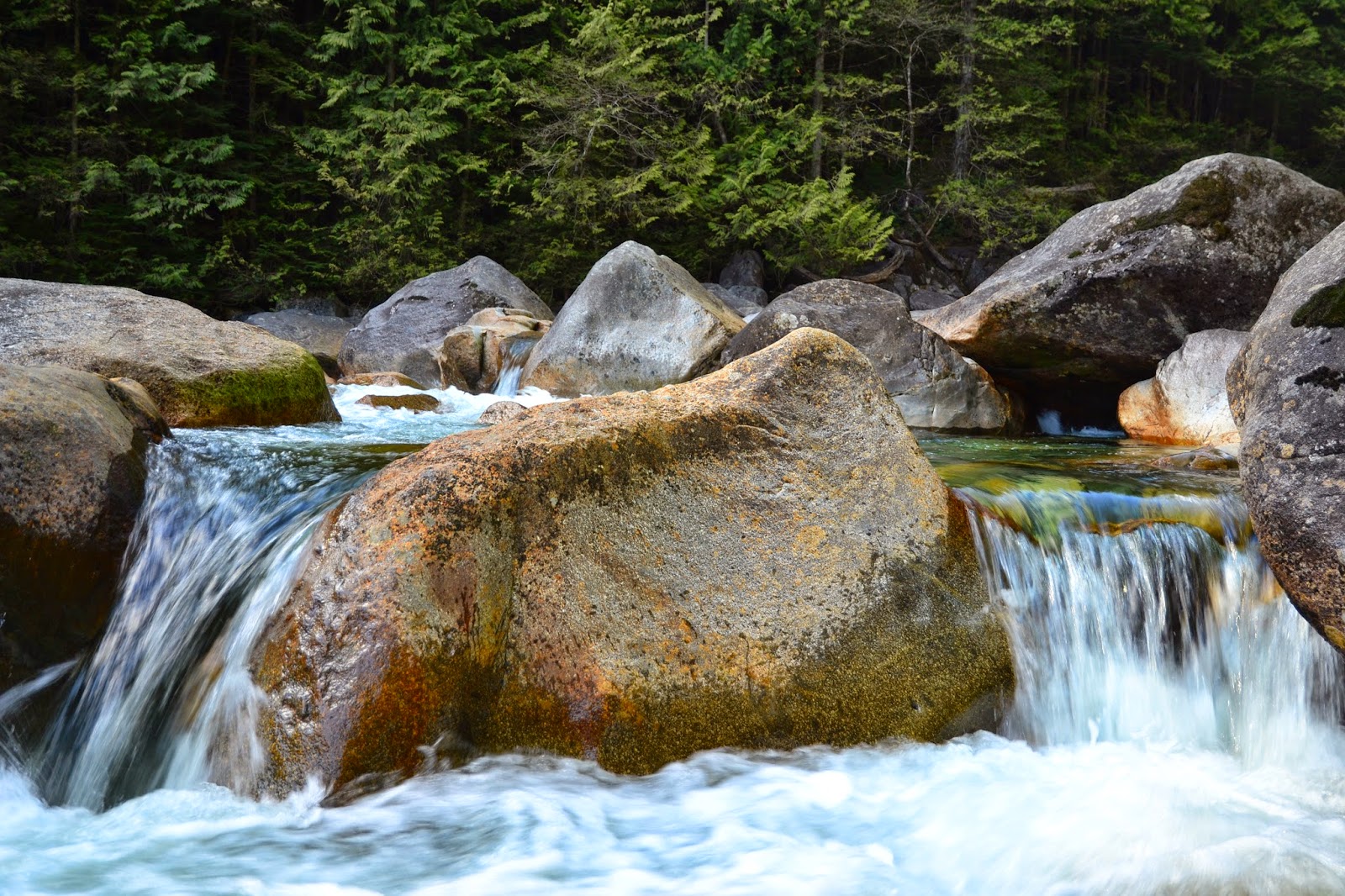 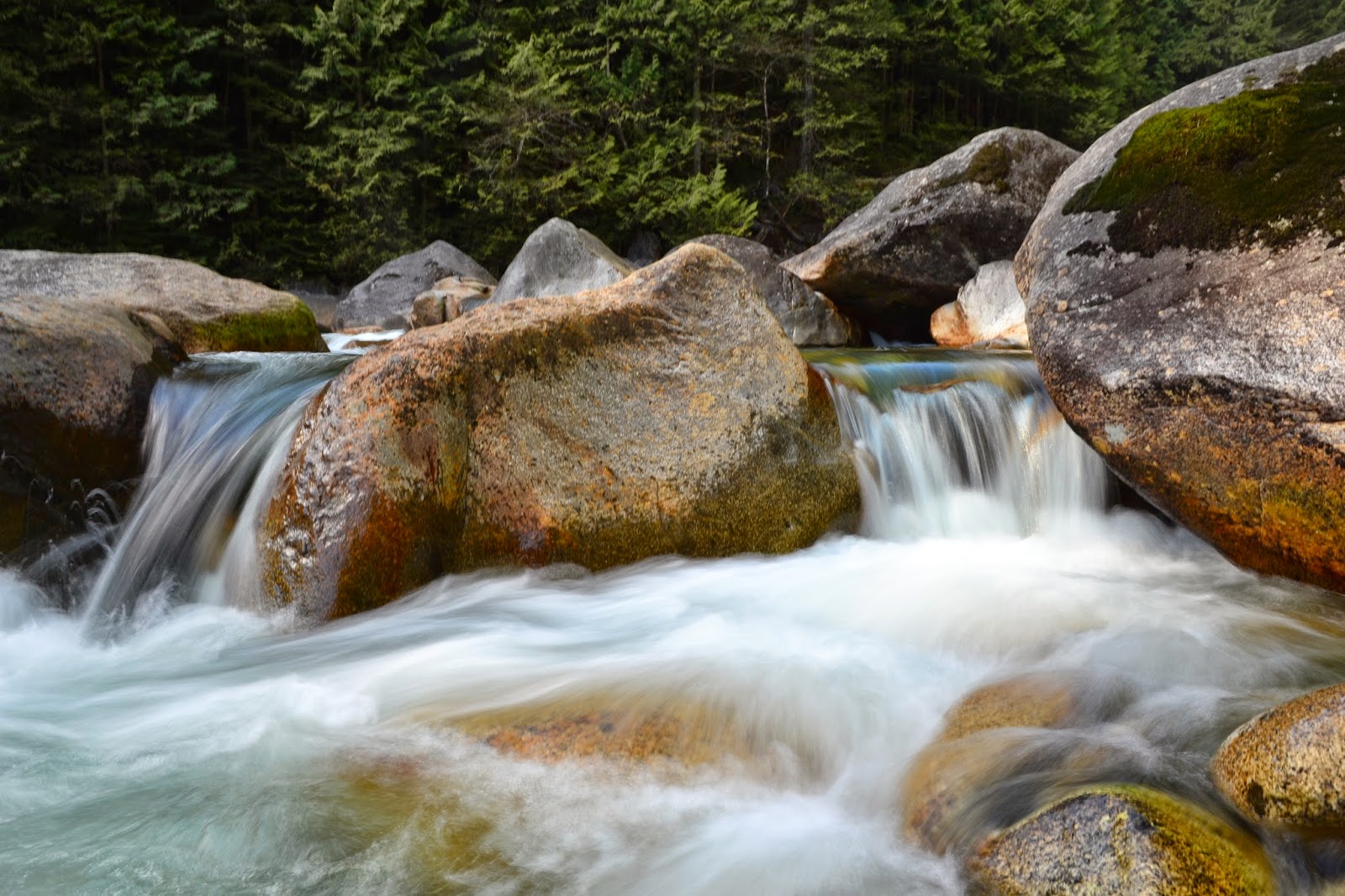 Eventually I had to stop taking pictures and head back.  The kids dealt with the hike pretty well.  It was a relatively easy hike, more than one person was out there with babies in strollers.  As a matter of fact, it was pretty crowded for a Thursday afternoon.  Another fact of life when you are this close to a big city.


We arrived at the parking lot and just as we were walking over to the car, this small, red pickup truck comes screaming around the corner with the tires spinning and sliding sideways.  It straightened up about 20 feet in front of me, slowed down and pulled into a space.  A few seconds later another small pickup comes screaming in sideways, proceeds to do a few donuts next to some parked cars and then pulls in beside the other one.

Now, granted, 20 feet means I didn't feel in any immediate danger, but it only takes a second to lose control and run over me or my family.  I was a little pissed.  Three teenagers got out of each truck and started whooping at each other.  Unwilling to let it go, I glanced at Sarah and she looked pretty pissed too.  I yelled over at them that this parking lot was not the place for that kind of *&^$.  There were kids and moms with strollers in here just a minute before you pulled in. They replied they didn't hit anyone and no one was close to them when they came in.  I told them to cut it out.  They told me to go back to Texas you Bleepity bleep.

I must have stiffened, I may have even stepped forward.  They said, "You don't want to do it man."  I actually kind of did.  It was 5 teenage boys and one teen girl.  But, the thought occurred that if I go to them, it is assault.  Don't do it.  I stood for a second and then decided to just leave.  No good would come of this.  I flashed them a peace sign (No, really, a peace sign.) as we drove off.  It took a minute to cool down.

It is ironic.  I have hiked and trekked all over the world and the ONLY true assholes I have met on a trail or trail head was in Canada where everyone is supposed to be so polite.  Go figure.
Posted by Adventure Nickel Farm at 10:25 PM No comments:

I don't know what you did this Easter.  I imagine it was something like dressing up in nice clothes and finding eggs followed by family time and too much food.  We decided to do something different.  We decided to hike up the side of a mountain!  We chose Blanchard Mountain and set our sights on Oyster Dome, the famed lookout over the bay. There are two main ways of getting up the trail, you can go up the Chuckanut side (he he, chuckanut) which is a little shorter, but a lot steeper or you can go up the Lily/Lizard lake side, which is longer, but not as steep.  We chose the latter.

We weren't exactly sure about the route, the distance or the elevation.  We did a little research the night before, but there are several different trails and different reports from different trails.  We decided to wing it.  So we got up Easter morning, found the eggs the Easter Sarah hid around the house and set out just before noon to go for a hike.

It started well, at least the first few hundred feet.

Then the protests start.  They are tired, not interested, it's too far, are we there yet, is this a loop trail?


We had to encourage, prompt, cajole and wheedle our way through the first couple of miles. 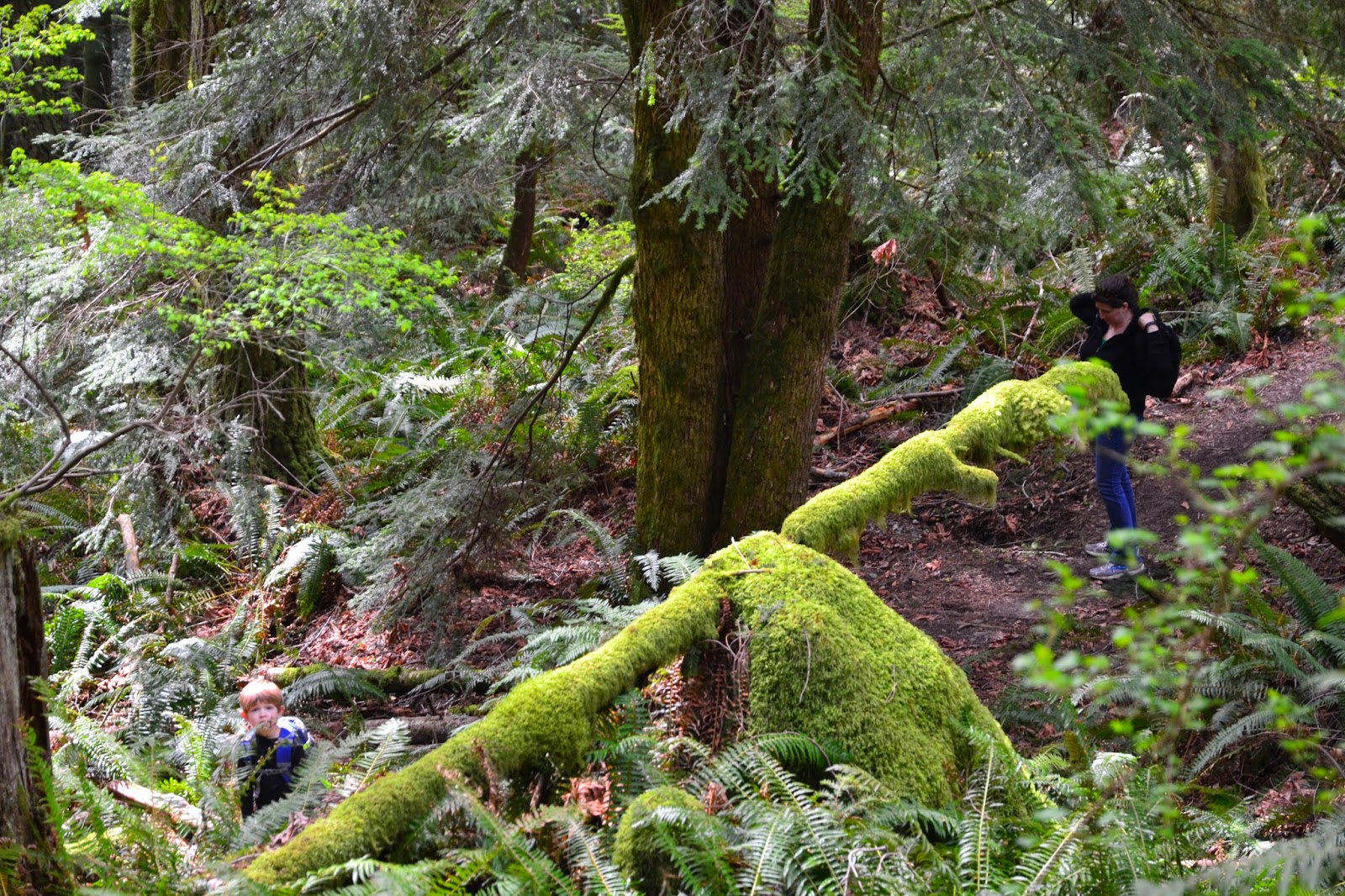 We needed something to lift us up and out of this spiral of negativity and grumpiness.  What could we do?  What would give us the energy to carry on this epic adventure?


So, what was it?  What magical thing pulled us out of the muck and the mire and delivered us through our adventure?

Sarah brought Mad Libs for the kids to do in the car and Michael remembered to pack them in the backpack. It started out innocently enough, we were doing the normal Mad Libs thing when we needed a noun from Max.  The boys recently read a Bloom County comics book and there was some reference to GORBACHEV SINGS TRACTORS! TURNIP! BUTTOCKS!  That started a cascade which led to every blank space in the Easter Special edition of Mad Libs being filled with buttocks.

That. ladies and gentlemen, is funnier than it sounds.  We recited our buttocks laden Easter stories until we could bear it no longer.  We were also getting some pretty sideways looks from any hikers we passed.  Eventually we had to tone it down as our trail joined the more heavily trafficked steep trail.  We were almost there. 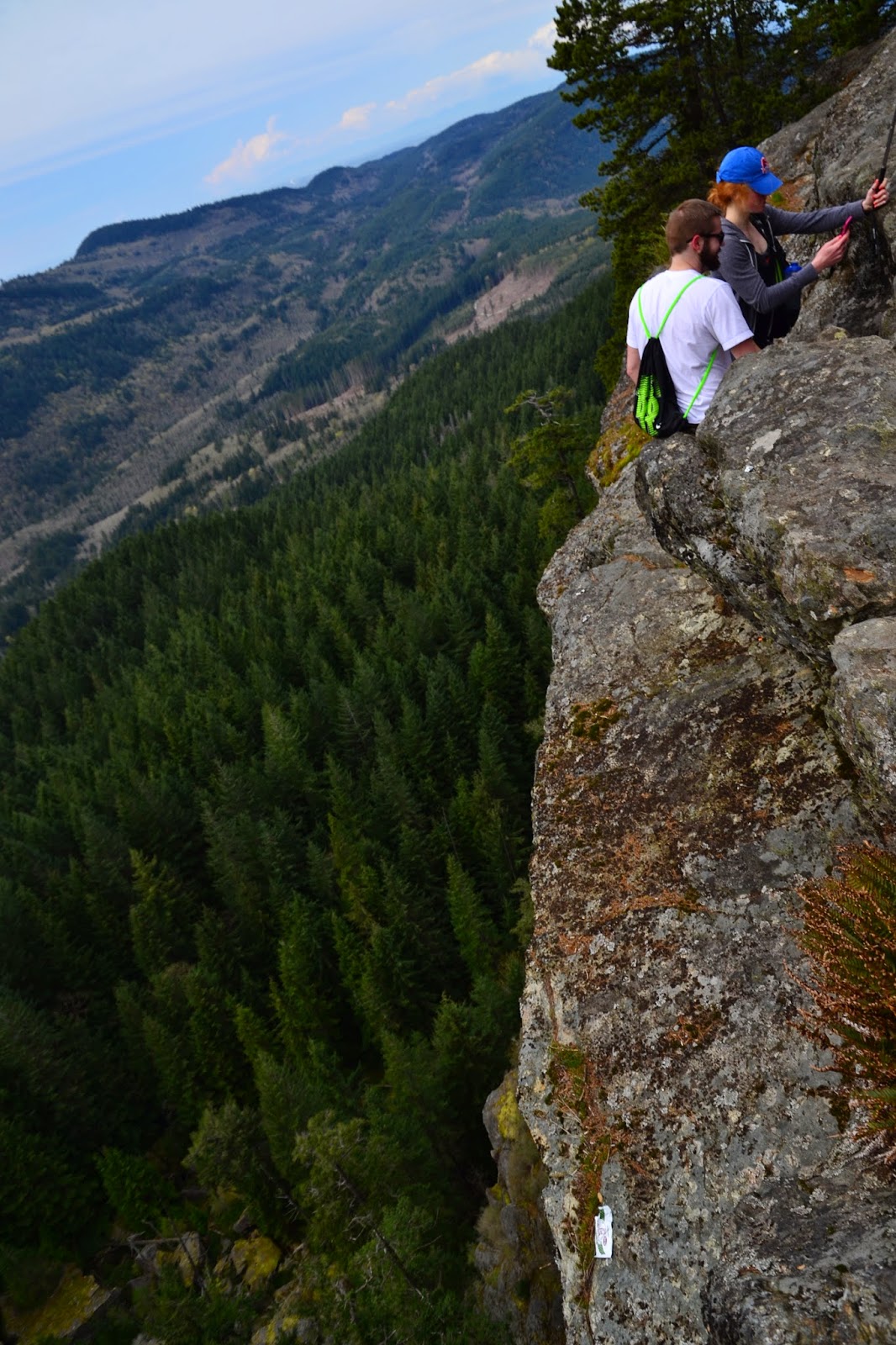 Then it was time to head back down.  The wonderful view was only half the journey. 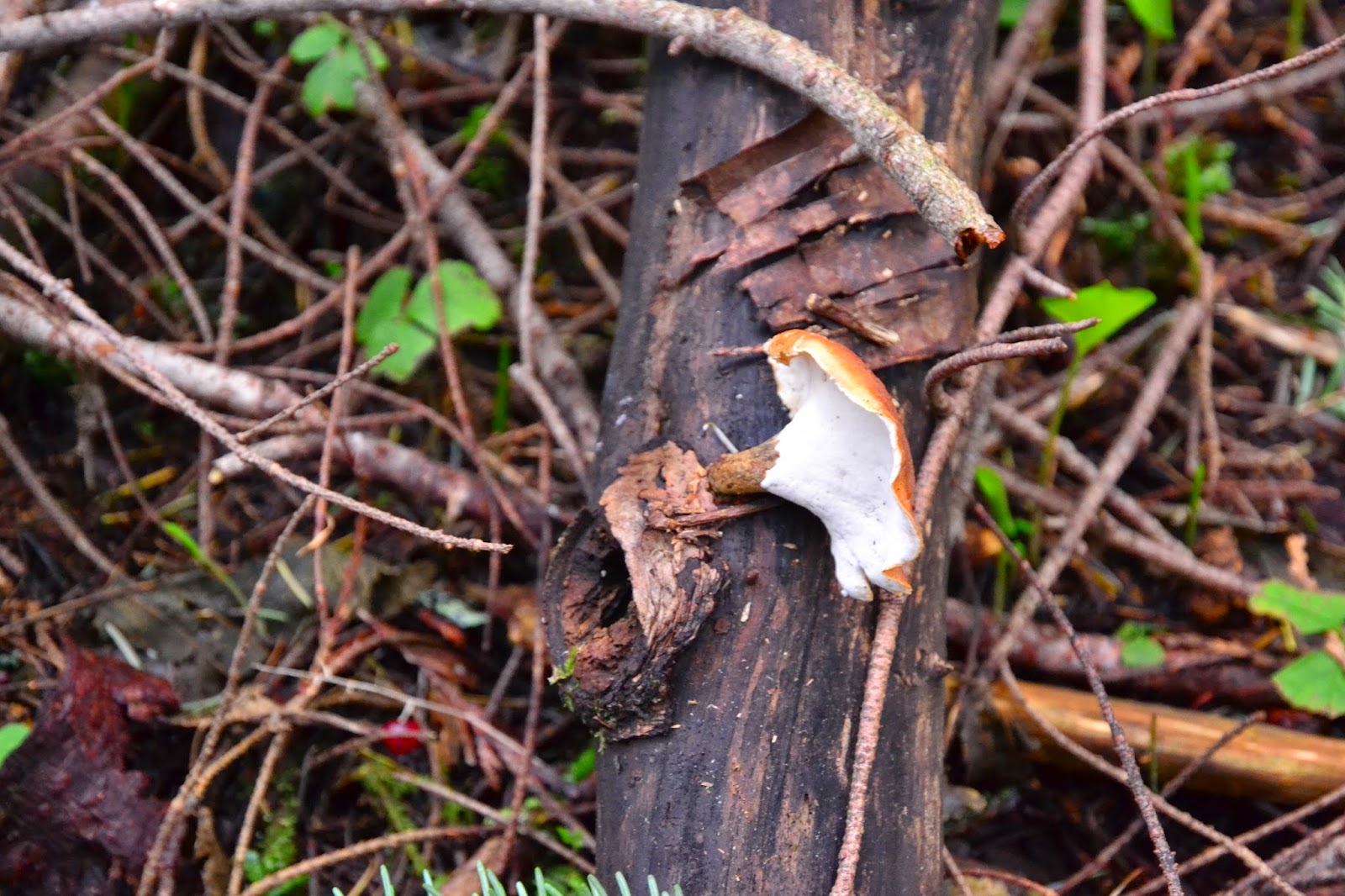 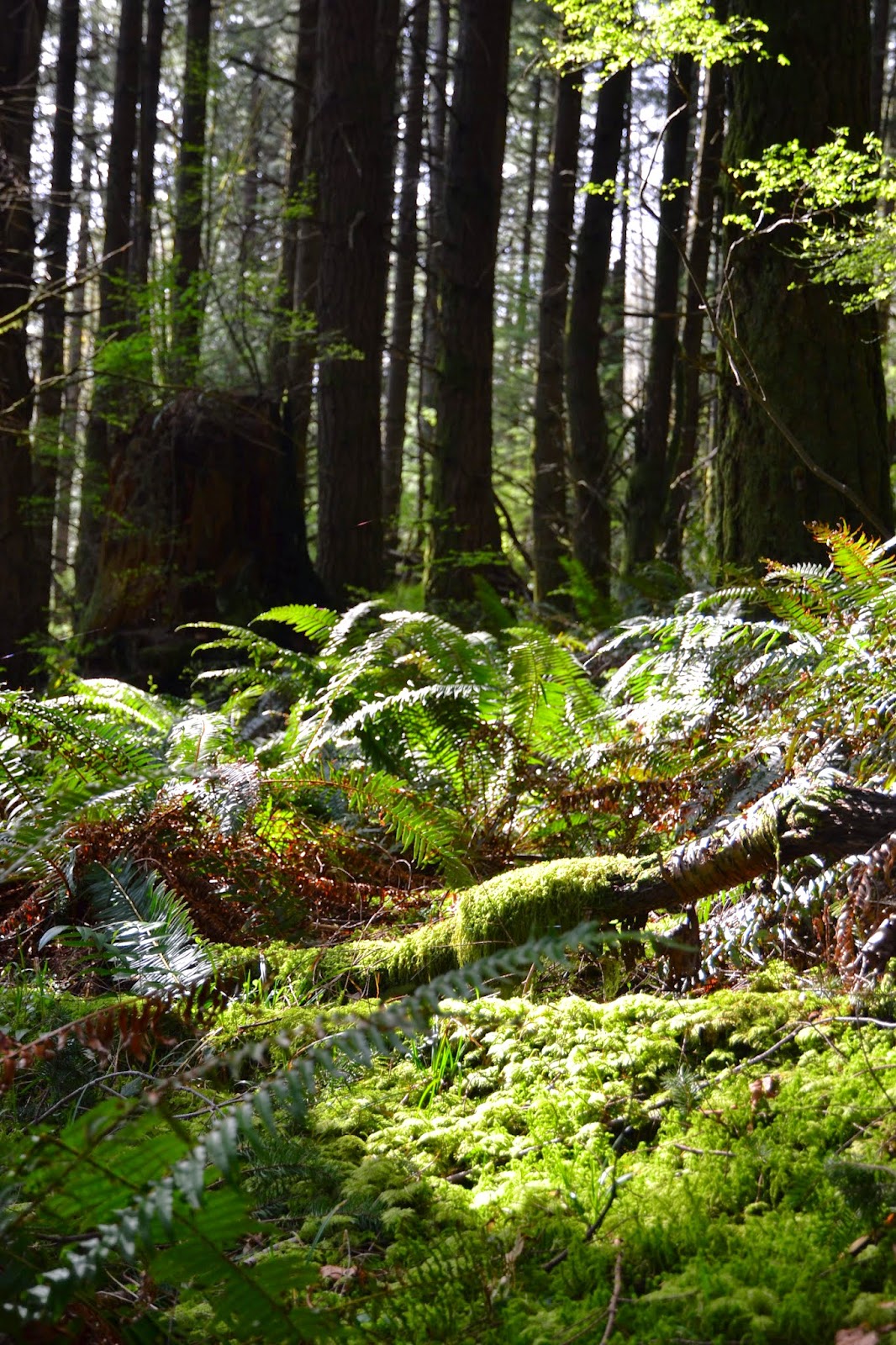 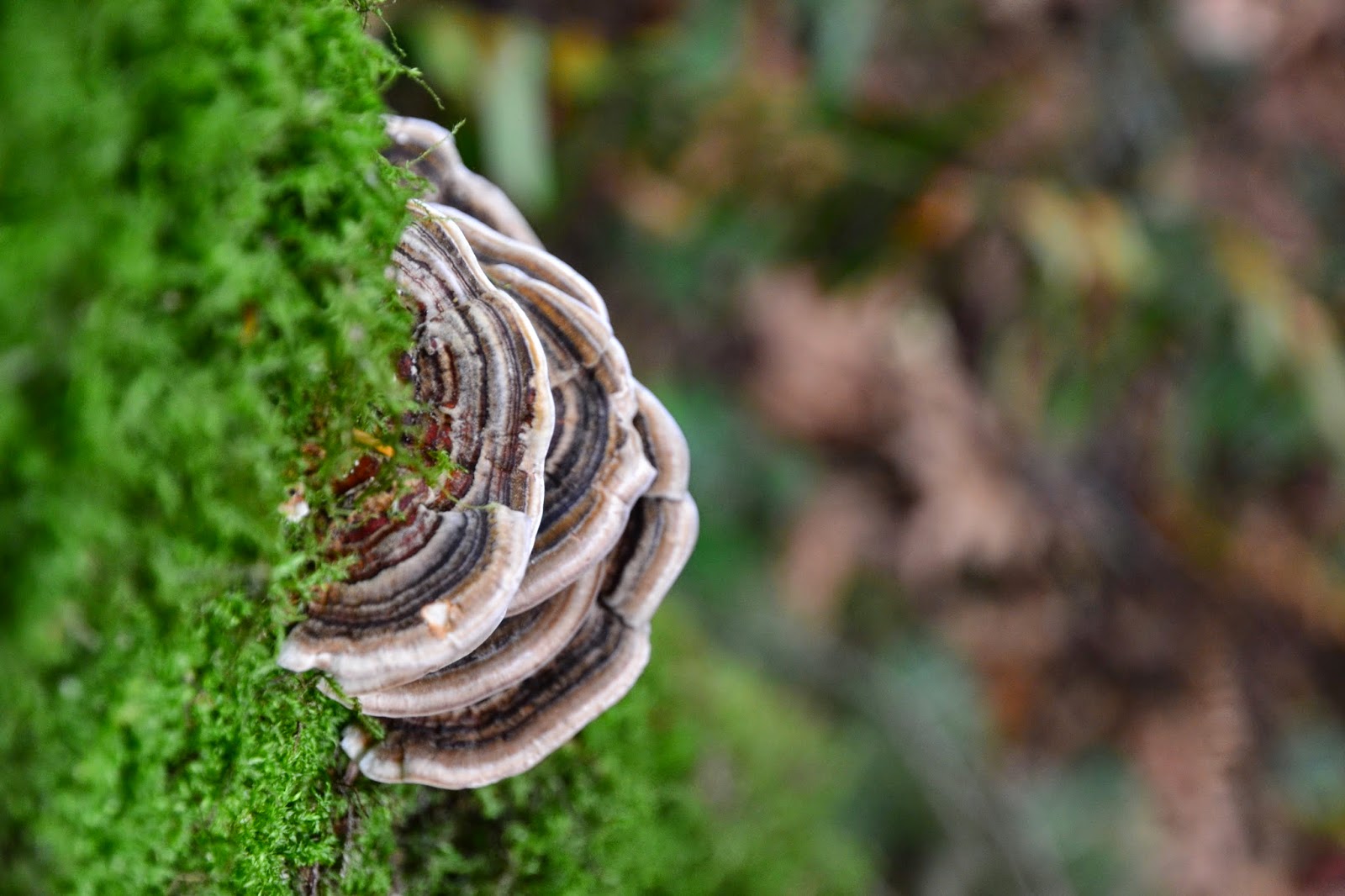 And then we were done.  My tracking program on my phone died, but it looks like it was around 8.2 miles total distance with an elevation gain of 1700 feet or so.  Good hike.  We were all wobbly legged when we made it back to the car. 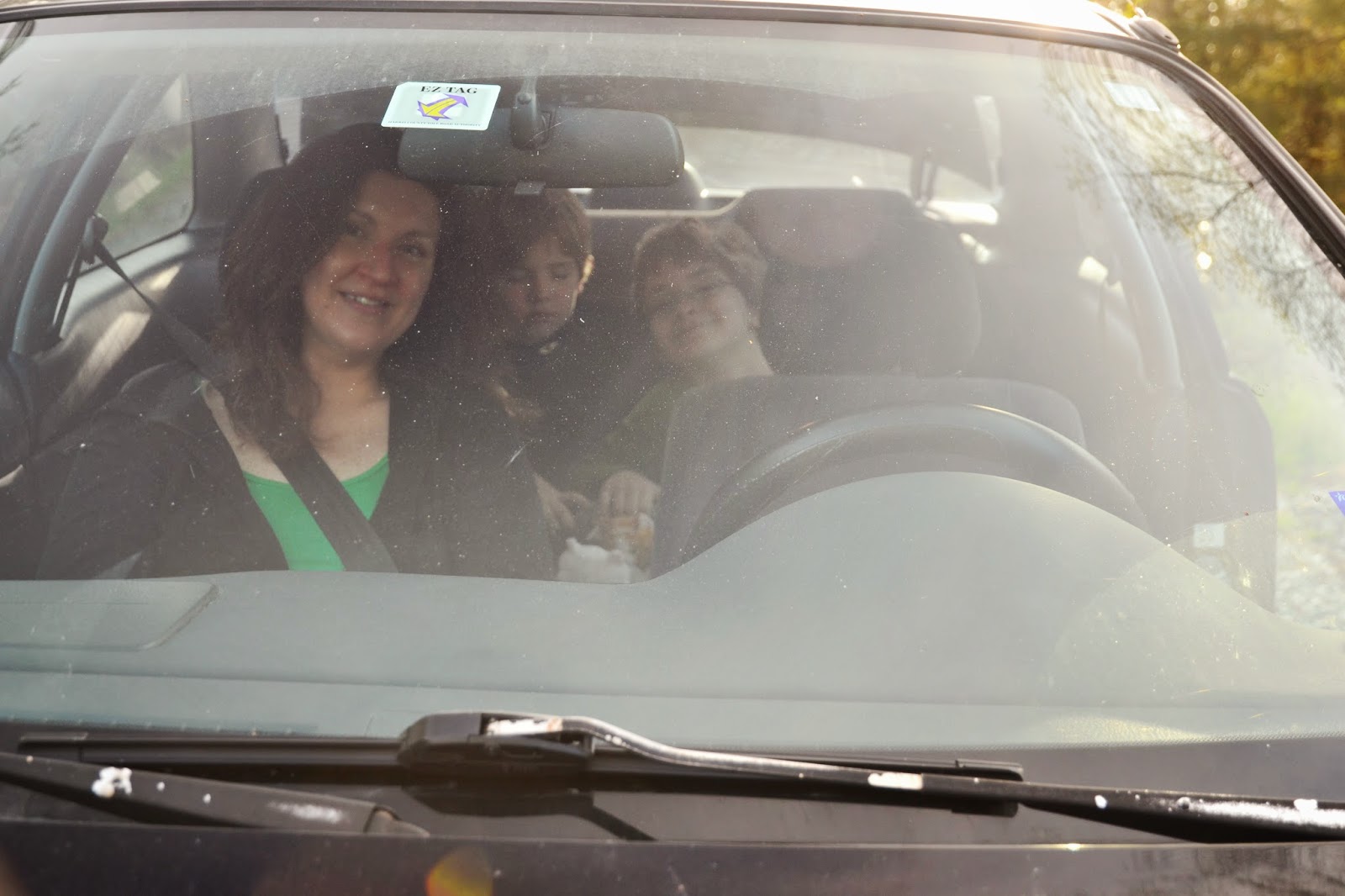 Then we decided to drive over to the Samish Bay Overlook.  Yeah, it is a drive up spot that give you a similar view over the bay.  We didn't want pictures there, we wanted a picture looking back on Oyster Dome.  Well, we couldn't see it from the overlook, so we got back in the car to head to our reward:  Bacon Cheeseburgers and Chocolate Easter Bunny Buttocks.  Along the way we found one spot where we could just barely make out Oyster Dome.


It was a great hike, we ended up having a good time.  Can't wait until next Easter.

Posted by Adventure Nickel Farm at 3:50 PM No comments: