Headgasket Chronicles: Down to it.

Back in it, still taking things off.


The electric impact wrench made the head bolts easy.

Well, the ones it could reach. Several were too cramped for the gun to reach. Then, it was the breaker bar and the deep-well impact socket.  And one, just one, that was too cramped even for that.

Got the passenger head off and turned back to the engine.

Oh yeah, I never drained the coolant.  Probably should have. 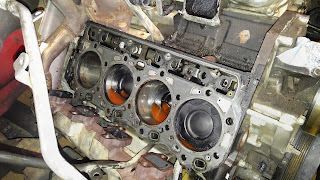 Here's the thing. I didn't see anything that looked like a blown gasket.

There were the stains on the outside that looked like a leak, but nothing else.

Maybe the other side.

The rear, bottom, head bolt on the driver's side required the purchase of another socket. The deep well I had been using was too long. So I had to get a regular 17mm 12 point.  The bolt can't come out until after the head comes out. There is no room.

But, come out it did.

Oh yeah, don't forget about the grounding strap connected to the passenger head. 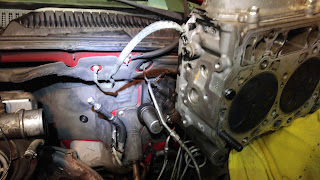 And there it was.  Heads were off.


Tomorrow, the heads and injectors go to different shops for testing and cleaning. 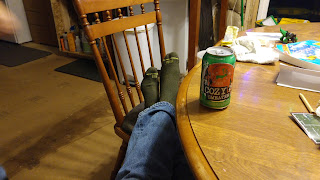 Posted by Adventure Nickel Farm at 9:22 PM No comments:

I'll blame the holidays instead of my fear of actually getting inside this engine.

Yeah, that sounds better.  Where were we?

I was battling the Y-bridge.

So, I had some hard to reach bolts.


And I mean a LOT of cursing. There is a rigid fuel line that runs right under the turbo, which is directly in the way.

Stick with it, it will come off.

Guess what I found?  Guess.


Shortly after, I found the little dead mouse body in the garage.  It was either the car, or the antifreeze that spilled. Either way.

But, man, there is so much disgusting to clean up.

I'll get there, probably.

Next up, the injectors.

The injectors came out much easier than I expected. Just unbolt the hold down and then use a screwdriver to pry it out.  These things need to be cleaned or something.


The weather took a turn for the worse about this time.  The days are cold and the garage is unheated at the moment. Working on metal parts sucks when you can see your breath.


For some reason, several pictures are missing from the camera.  I don't know where they went.  You will just have to imagine the valve-cover gasket removal process.  It went pretty easily. There were two bolts that were a real pain in the ass on the driver's side, rear.  They required actual allen wrenches, using the short end. Nothing else would fit in there.  And more cursing.  Lots more cursing.


Almost there. The driver's side valve cover was a pain too because the steering column gets in the way. Oh yeah, and two fuel lines.  One of the push rods came loose from a rocker arm when I banged it. I hope there was no permanent damage.

Damn, it almost sounded like I knew what the hell I was talking about there for a second.

Then I worked on the exhaust manifold.  The bolts were hard to get to and on there pretty good.  I used the breaker bar and a 17mm socket. I used a regular and deep-well impact socket as the case demanded.


The driver's side was a little different.


Eventually, it relented, and I got the bolts out.  Mostly. This was a huge, time-consuming pain. I had to disconnect the steering column just to reach one of the bolts.  Oh yeah, and one of the studs stayed in. I'm not sure yet what I am going to to when it comes time to take the actual head off. We will see.


I managed to get one of the rocker bar things off before Sarah came and got me. Coffee was ready and I was cold and tired.  Enough for one day.

So I left it unfinished. I figured I could take my time. I work the next three days and the shop that will test the head wasn't open over the holidays anyway.

Suckers are almost off. 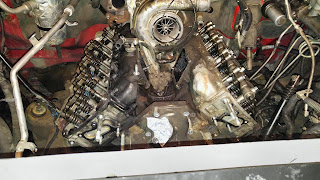 Posted by Adventure Nickel Farm at 10:48 PM No comments: