Got more stuff done today. Missed Sarah and the kids more too. Was whiling away the hours goofing off on the internet this evening when I heard what sounded like Satchel eating his food. But Satchel was sitting right behind me.

Every morning we find Satchel's water dish filled with mud. We knew from tracks and the occasional glimpse that it was a raccoon washing his food in Satchel's water dish. Water can be hard to find here in the desert. Tonight I managed to sneak the door open a little and watch what turned out to be two raccoons eating the dinner that Satchel left behind. I snuck back and grabbed my cell phone because Sarah has the good camera. I would have loved to have had the good camera. It didn't take long for the little guys to notice me. They seemed not to mind as long as I moved slowly and didn't come out too far. Satchel was a vibrating bundle of nerves right behind me, but to his credit, didn't move after I told him to sit. 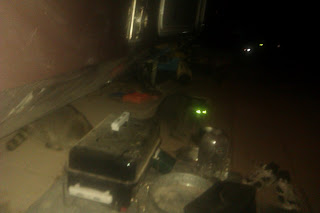 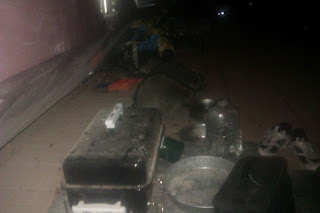 Posted by Adventure Nickel Farm at 6:50 PM No comments:

Sarah and the kids are in Houston. It's lonely here.

I did manage to get some things done. Truck washed, work out done. Dishes, shopping. OK, so not too much really. I get more done with Sarah here. More chores tomorrow.

On the other hand, Sarah got a clean bill of health from the doctor and we are now officially done with the HAVE to do list prior to leaving. Free to go.

It's amazing how much better life is with your family around. I'm looking forward to spending some time closer to my Mom.
Posted by Adventure Nickel Farm at 7:08 PM No comments:

So, Michael went ahead and sped up the tooth extraction process by standing too close to a dancing Max. There was a head collision and a much looser tooth resulted. Last night he woke up and decided to work at it a bit. The result: 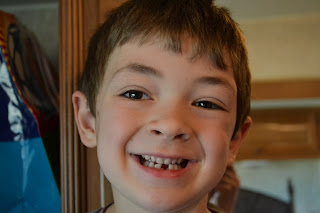 Starting the preliminary stages of organization for the trip to the next contract. Nothing big, just getting oil changed, donating unused stuff and so on. Ready for the next adventure. This one promises to be more consistently cold than we have had to deal with before. Should be another interesting adjustment.

I am going to start making more of an effort to record some of the crazy and fun things the kids do, just so we remember. In that vein, the other night Michael was sitting on the toilet just before the shower and invited Max to come 'pull my finger'. He seemed pretty impressed with the results. Stay classy kid.

Sarah is taking the boys to Houston again next week which leaves me alone here with Satchel. We have spent more time apart this contract than at any other time since we were married. Don't like. We work best when we are together. I can think of half a dozen couples right now who routinely spend days and weeks at a time apart from each other and I don't know how they do it. I'll miss them and count down the time until they return. Meanwhile, I'll try to take advantage of the relative calm to get a few things done.

I am considering changing the Adventure Nickel over to its own website instead of using blogger. Don't know if it will make a difference or not. I may try to grow it into something more than just a blog. Time will tell.
Posted by Adventure Nickel Farm at 5:10 PM No comments: