OK, when last we spoke we were swimming with a cold penis in the pool outside of Corvallis. The next day we drove to the coast and saw the Oregon Coast Aquarium. That was pretty cool. Michael was excited to see the giant Pacific Octopus and the Wolf Eel. We walked through the underwater tube with sharks circling above and other fish in different tanks. One of them even had some divers in cleaning everything up. I overheard one parent using this as a teaching moment about how everything needed to be cleaned even if you had to get in a SCUBA suit to do it.

We made our way over to the octopus display and there was no sign of him. Couldn't see anything. We thought maybe he wasn't even there. Very disappointing. So we went to see sea otters. Then on to the tide pool area where you can touch things, a big hit. It is a nice aquarium, if you are in the area I do recommend it. After a bit we moseyed back over to the octopus tank. Still nothing there. I searched and searched and finally found it stuffed into a back corner blending in to his environment very well. Then I saw a tentacle move. I called Michael over and he stood front and center while the octopus came out and posed right in front of him. Too cool. It sat there and made itself look big, changed shades of gray and then retreated again to the corner where it seemed to disappear. Pretty cool stuff.

We wandered around and saw more fish, jelly fish and other neat stuff. Took lots of pictures and even bought Michael and Max stuffed animals. Michael wanted a Wolf Eel until we hit the parking lot and then he decided he should have bought a Moray Eel. Max wanted a sea otter and seemed quite happy with his choice.

Then we went home, had dinner and chillaxed for the rest of the day. After that, it was on to Mountain Man RV park in Cave Junction. I know I am behind a few days, but I'll catch up.
Posted by Adventure Nickel Farm at 10:14 PM No comments:

First, the water at this campground is, Sarah and I have decided, the worst in the world we have experienced. That covers a large chunk of the USA, some Mexico and Canada, much of Europe, Hong Kong, Persian Gulf, the Carribean...all better than here. Sulpher and metal. Awful.

Second, the pool water is cold, so cold that Michael screamed at the top of his lungs at the pool, as he entered, "It's so cold on my penis!"
Posted by Adventure Nickel Farm at 11:16 PM No comments:

Today we went from Vancouver WA to just outside Corvallis OR. 102 miles. Easy enough drive, but too much traffic for my taste. Now it is sunny and hot and time for the pool. We woke up to this back window... 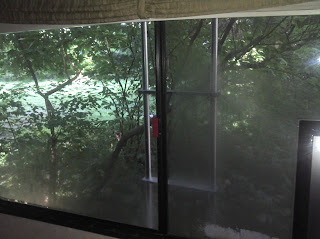 And will go to sleep to this back window... 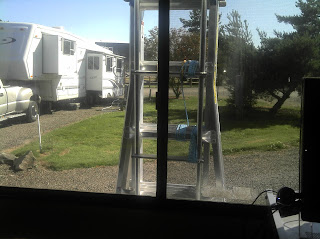 Posted by Adventure Nickel Farm at 5:17 PM No comments: