I worked, did ACLS, PALS, worked again and managed to get a little done on the truck.  Yesterday was a day off and I just shut it down.  I tried to do stuff and "Nope"ed instead.

Our house is a manufactured house and as such, is up off the ground. The skirting that surrounded it and kept our air was mostly rotten and partially ripped off. We had 600 cinder blocks delivered a few weeks back with the intention of building the skirting wall out of them.

Then the truck broke.

And here we are.

I was going to put up a picture of the wall, but even I have some pride.

Winter was coming too fast and I just stacked the blocks next to the house.  I didn't have time to make it all nice and neat and level.

I know, I know, on to the truck pictures.

With the wiring harness out of the way, things are a little more accessible.

That one took a minute. I couldn't figure out how to get the larger connector undone. I slid the exterior of the body of the connector out from under the plug and toward the driver side fender.

Behind it, I found a bastard.


Yeah, there's another bolt on the left, inboard side behind the bracket and snuggled up near the firewall.  It's a 12 mm for those of you playing along with the home game.  The space is too small for a ratchet. So, the only option I could see was a box wrench with my hand sliding back behind the bracket.

This stupid bolt frustrated me to no end. I actually didn't get if off until I had lots more off. I got it after I got the fuel rails and fuel lines off the top of the engine. I crawled up on top of everything and used the closed end of another wrench over the open end of the 12 mm so I could push it down.  Finally came off.  I called that thing several names unpronounceable in any language.

After struggling and failing with that bracket for a while, I moved to the passenger side and pulled off the little bracket up at the front.


For some reason, the picture won't upload.  Don't worry, it is easy to remove, one allen wrench and thirty seconds.  That's why I chose it.

I pulled all the fuel lines going across the top of the engine and the lines going from the fuel rails to the injectors.

Then, I pulled off the big tube there in the middle, the exhaust gas recirc maybe?  Big funnel, that's what I'll call it.


And that is where I leave it.

Now, I have to figure out how to get the y-bridge out without pulling the turbo. They say it's easy, just unbolt the 4 bolts.

Yeah, guess where two of those bolts are?

Some more research is required. Nothing tomorrow though, kid's flag football party and then off to work.  Maybe Sunday or Monday.

Posted by Adventure Nickel Farm at 10:39 PM No comments:

Yeah, a little much.

Sometimes I just get a little overwhelmed.

So, I say to hell with it and take the day off, mostly.

Where were we? How many days?

I've decided it doesn't matter anymore. Crediting a whole day when I got to spend thirty minutes or an hour working on the head gaskets is depressing.  It will take how long it will take.

As an aside, one of my co-workers laughed and asked if I knew how much the mechanic was going to charge to fix it when I couldn't get it back together.


I had a couple of things I wanted to get accomplished, and I almost did.

I needed to disconnect the fuel lines to get the ignition wiring harness off.

Yes, my level of ignorance is borderline dangerous.

I live this way. Don't judge me.

So, it turns out I needed a special tool for that.

Then, I went underneath and disconnected to the glow plug wires and fuel injector leads just like the other side. I disconnected the glow plug controller by pulling the bottom part of the bracked toward the driver's side and it came off.  I thought I had a picture of that, but I can't find it.

Then, I pulled it out. 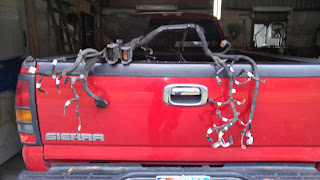 With that out of the way, it was going to be easier to access and pull out the fuel injection lines which would be near to end of the tear down. Things should really speed up.

Work days, then a cold snap that required me to try to build some of the skirting around the house to keep the pipes from freezing. Oh yeah, and I had to recertify in ACLS so I could keep working.

None of this helped the truck

So, I have to work tomorrow and I have to recertify PALS on Tuesday. I will get back to truck stuff and hopefully get the heads off soon.  There are a few more tools to buy.

Just have to keep at it.