OK, so Andy did the majority of the back of the house.  Watching him go was an education.

I was, and am, determined to do as much of this myself as I can.  So, I have to make mine look at least as good.

I have my work cut out for me.

I had removed the rotten sections of floor joist and sistered them with more joist running back to the frame rail.  It felt pretty sturdy.

There was still a problem though.

The particle board sub floor was still rotten. It had to come out. Unfortunately, pulling the rotted flooring out from between the joists and the sill of the wall was a labor intensive and persnickety process.  I could, however, pull out the joists and remove the material a little more easily. Oh yeah, and I checked for nails this time.  No impaling myself on the house today.

And those staples! And nails!  I think the weight of fasteners in this house might rival the weight of the wood.  Well, the dry wood anyway. The stuff saturated with water is pretty heavy.
But, eventually, I was able to remove all the rotted subfloor and I put pieces of plywood in place to hole everything until I was able to get a larger, continuous pieced cut and placed. 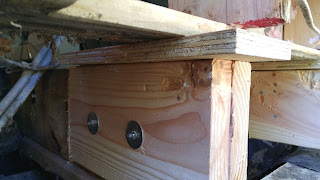 Then, I used a large scrap piece that just so happened to come right up to where  I will be putting the bathtub drain hole. I installed the piece, squared it up with a rubber mallet and a sacrificial piece of wood for banging.

There were still some rough bits to finish up, but we had a visitor.

One of my bestest nursing friends came to town with a birthday lunch for Sarah.  She has kids about our kids age and we all skipped work to go to the local swimming hole after lunch.

It was made from an old rock quarry.


It was formally requested that I not post pictures of the ladies in their bathing suits on the Internet.

She didn't kill me for flooding the house.  Those are all the swimming pictures you're gonna get.

Then, it was back to the house for an hour or so until the kids Jiu Jitsu class.  I managed to sneak in a little more work on the house.

I think it's shaping up.

Then, it was off to kid's martial arts class.

On the way home, we noticed the sunset was going to be a good one so we stopped at our favorite viewpoint.

Then working on the weekend.
Posted by Adventure Nickel Farm at 10:59 PM No comments: 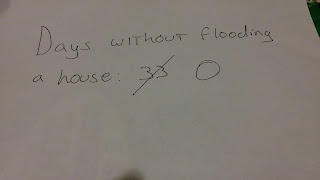 Woke up this morning, had coffee and went to take a look at the house.  You know, the sound of water dripping in an unoccupied house is particularly disconcerting.  Terrifying in fact. It makes you move fast.  I ran inside.

A water fountain appeared to be erupting from the floor.  I saw the problem.

For some reason, after holding for two weeks or so, the glue decided to give way and send ten gallons a minute into what will be Max's bedroom. I pushed the end of the tubing out of a conveniently placed hole in the wall and took off.

I ran outside.  Sarah was sitting outside talking on the phone to her brother, it is her birthday after all, and I ran past to the well house to shut off the water.

That's where I discovered the door was closed to the well house.

Yeah, I didn't even know where to try to turn.  It wouldn't open. At least the water wasn't pouring into the house anymore...probably.

"What? Where? I gotta go, the house is flooded."

I guess I will be replacing the subfloor in Max's room after all. It looked alright yesterday.  Today, not so much.

Guess what we spent our morning doing?  Yep, cleaning up.

Eventually, I got back to work on the place.

I left it, prior to Great Flood II, looking kind of like this.

The ends of the floor joists and the sub floor under the sill were crumble-in-your-hand rotten.I was fixing them by cutting away the rot and sistering another piece of 2x8 next to what was left, but it left me unsatisfied.  This is where the heavy bathtub will be.  It needed to be stronger.  So I did some research and decided the sistered segment needed to go back at least to the steel frame and I needed to find a better way to join the two boards than a crap ton of wood screws.

That seemed a lot better.

Then, the existing particle board sub floor was so rotten that I decided to pull it all out, all the way to the outside, and replace it with plywood.  Even under the sill of the wall.  So, I cut into it and was pulling it off the nails that held it to the sill.  A piece I was pulling on pretty hard finally gave way and I suddenly found myself one with the house.

Yep.  I impaled my forearm on the rusty nail.

It's not like it was probably rusty because the septic tank backed up and drained sewage all over it or anything.

I cleaned it up and irrigated it with a saline flush I had in the truck. Yeah, sometimes I forget to empty my pockets at work. The kids loved watching that, by the way.

I managed to get back to work, my tetanus is up to date.

Did I mention it was Sarah's birthday.  I know, right? She didn't even mention divorce. She's awesome.

The boys baked her a birthday cake and decorated everything. It was pretty cool. 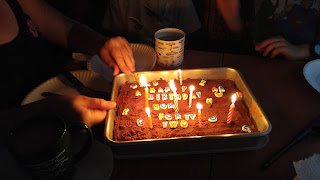 Not many pictures today.

Got a lot of work done though.  The back of the house is starting to look like it could be habitable some day.

Some more tomorrow and one more day of Andy. Then, back to being a do-it-yourself guy.

Oh yeah, and back to work in the hospital. Gotta pay for all of this somehow.


Well, Sarah did half of the dishes.  It takes teamwork.


Posted by Adventure Nickel Farm at 10:07 PM No comments: