It's been a long time. I know.

Crappy excuse, but true.  Real life sometimes keeps me from promoting this fantasy idea that all we do is go to amazing places and see amazing things.  But, alas, I still have to shovel out goat poop. I still have a regular job, I still do all the normal things normal people do. This blog hasn't made me independently wealthy.

Today we took a trip though. A good one.

There is a picture that hangs in one of the corridors of the hospital where I work. I have studied on it for quite some time. I finally thought I figured out where it was and today was the day we went to find out. Today's hike was a year in the making.

Today we went to Comet Falls. Sorry for the pictures, I haven't been adventuring with the big camera in a while. Again, real life intervenes. 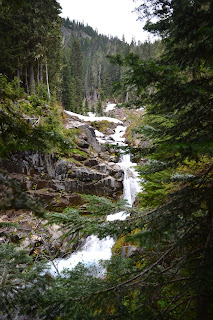 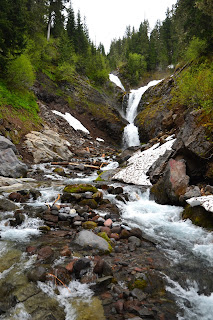 At this point, our guests - Rachel and Chris from It's a Wanderful Life - decided they were done. This worked out pretty well though. Sarah and I continued hiking down toward the waterfall and Rachel was able to take the picture that I wanted.

Pretty stinking awesome if you ask me.


I managed to take a few pictures while I was down there. They aren't as cool as Rachel's pictures, but I try. 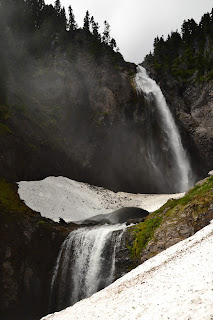 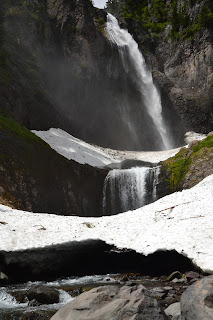 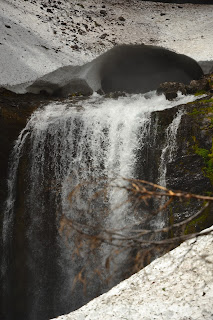 Then it was time to head back. 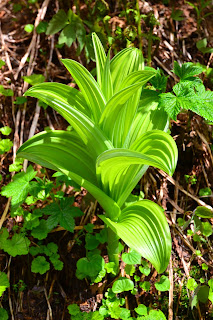 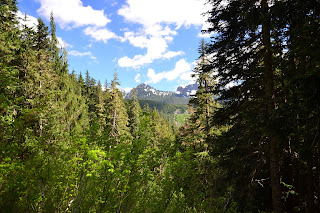 The hike was a round trip of about 3.6 miles with an elevation gain in the 1200-1300 foot range. We might have to go back later in the season when there is less snow.

Good trip, I recommend it.

Oh yeah, and go check out It's a Wanderful Life. They're pretty cool.

I texted my sister Michelle.

Want to climb St. Helens with me?

And with that, it was on.

We arranged our schedules, got time off, and bought some necessary supplies. Sarah didn't go with us and we tried to get another sibling to come, but he wasn't interested enough. It was just us. She bought the permits.

A guy at work advised us to go up the winter route when there was still snow as it made for better hiking. Apparently it can be a pain to hike up the slope in summer as the ash is loose and you end up sliding back quite a bit on each step. That meant we were taking the Worm Flows route.

We arrived at the Marble Mountain Sno Park the evening before and set up the tent. Miche wanted to sleep in the truck, but we brought the tent and I though stretching out to sleep would be better. We went to bed around 10.


The alarm rang at 0400, or Oh-Dark-Thirty. I managed around 4 hours sleep total. The combination of nerves and discomfort kept me from sound sleep. Miche slept a little better, but not much. We rose, packed up the tent and made sure our gear was together. Then, we started out. We hit the trail head at 0507. Girls take so long getting ready. :-)


The trail starts out in the woods. It was damp ground, but no snow. That lasted all of a quarter-mile. We started hitting patches of snow and by about the half-mile mark, it was mostly snow. The slope was gradually upward, but nothing strenuous at all.

A couple left a little before us, but were a little more conservative with their energy than we were, so we passed them and ended up leap-frogging them all day. The sky grew lighter, but there was no sunshine.


We climbed up and watched the sky get lighter.

The trail kept wandering up through the woods. I tried to get my GPS/running watch to track us, but I didn't think about it until about 1.5 miles in and then it had trouble hooking up with the satellites through the clouds.  We just followed the tracks. A couple miles in we reached Chocolate falls. I think it is named that because it darkens with sediment when the melt starts.


About this time is when I realized I had made a mistake. I filled the bladder in my backpack with water from a jug in the truck.  It was horrible. I don't know how long it had been in there. I filled Michelle's from a different jug and hers wasn't great, but wasn't too bad I guess. Mine was essentially undrinkable and I didn't have any other liquid.

I started eating the cleanest snow I could find and we trudged on.

Eventually we started to get above the clouds and the sun tried to show up.

The trees thinned out more and we followed a ridge above Swift creek. Eventually we saw a sign that meant we were on the right path.


The trees grew thinner. Then, we hit the ridges called the worm flows. These are made of scree and boulders. It was nice on one hand to get off the snow for a minute, but the rocks were unstable in places and it made for less snow to eat.

We picked our way through the boulders and kept climbing. The view was incredible. When I wasn't searching for the next footstep, I was watching the shadows of the clouds on the tops of the lower clouds. It was pretty awesome. 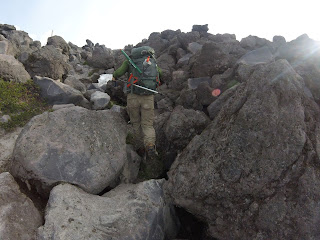 The worm flows went on and on. It seemed like we scampered up those rocks for a long time. But, eventually, they ended and we had to put the spikes back on and hit the snow. We could see the snowy mountain rising above us, it couldn't be far.

The cool thing was we could see Mt. Adams and Mt. Hood out above the clouds.


The dehydration was starting to get to me a little bit. Somewhere around here, I dumped all the water out of my camelbak and replaced it with snow. It cooled down my back and gave me the occasional sip of not terrible water.

We started up the slope. The path now seemed to be just go up until there isn't anymore up.

This weird thing kept happening. I would get so used to walking forward and up that when I looked to the side and saw the horizon, it looked unlevel and I would get a little disoriented. It was discombobulating.


It turned out the rim we saw wasn't the top. There was another one beyond that one. And another and so on.

It started to get a little depressing. Each time I would look up and see people so far away they looked smaller than ants and I would think surely they must be near the top. Then, when we got to where they were I would look up and see more people so far up they looked smaller than ants. I started to believe the mountain was still growing just to taunt me.


It was better just to watch your step.


We had been eating a little as we went, but it was time to break out my secret weapon.

I wasn't sure, by that time, what the question was, but the answer was Trader Joe's sour gummies. The sugar rush was instant, but short-lived. Miche and I shared them and kept on trekking.

We lost the will to take pictures it was so bad. There aren't any pictures of the approach to the rim because we were never sure anymore if it was actually the rim or just another fake out and we didn't have the energy to fiddle with the camera.

We just walked up.

Sometime after noon, we reached the top. The up finally ended.

And it suddenly got cold, like really cold. Wind whipped across the top and my hands and face grew numb. I got a good snot-cicle going. We watched in horror, along with everyone else, as a guy started to chase a dropped trash bag out onto the corniced edge. Luckily, he let it go. I hate litter too, but damn. We watched as the others started their descents. One or two were on skis, but the rest grabbed trash bags or put on ski pants and started sliding down on their butts.

Eventually, my hands regained feeling and my butt went numb. The trip down was much faster and more fun than the trip up.

Miche was rumbling something about climbing Adams or Hood for the next day. 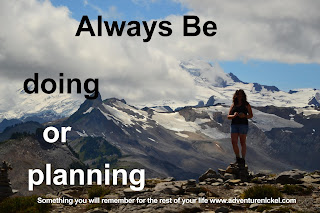 Posted by Adventure Nickel Farm at 3:58 PM No comments: