It's been a long time, I apologize.  Things have been busy.  Took the grandparents to Bandelier National Monument and got some pretty good pictures, fixed the AC on the car, fixed the hot water heater, Papa fixed the awning.  Like I said, busy..Then I had three days of work.  We had asked the grandparents to stay an extra day for us and they were willing so we set our plan in motion.  I got home from work around midnight and got up around 0600.  Then Sarah and I drove to Taos Ski Valley and set out on our quest to summit Wheeler Peak, the highest peak in New Mexico.

We knew we would only get one shot, so we planned this one.  After some research we decided to go up the Bull of The Woods trail and down the Williams lake trail.  We knew it would be a long day and wanted to get out early, but after three days of 12 hour ER shifts, I didn't want to try it on anything less than 5 hours sleep.  So we got up at the aformentioned 0600 and drove two hours up to the ski resort.  We ended up on the trail just before 0900.  This is late for this kind of thing.  Especially here and in the summer monsoon season when thunderstorms threaten most afternoons. But we were there and happy and ready to go.  The 20+ pound packs we were carrying seemed heavy, but doable.  We hadn't prepared for a hike of this magnitude before and usually we are toting two kids with us as well.  We over packed.    Regardless, we were off.


At first, the trail was pretty steep and rocky as it ran alongside a babbling stream.  We were eager to get up a little higher so we could get away from the back up beeps and crashing noise of some construction going on at the ski resort.  The trail was somewhat well marked, but there were places where it split or a small offshoot would originate that left us wondering.  If you go, follow the horse trail whenever you see the signs.


As we hadn't done a hike of this caliber before, we were still getting used to a thing or two..  First there was the heavy backpack.  We were packing three 1.5liter water bottles each and then stores of food and other gear.  Second, were the trekking poles.  We had just bought them and were figuring out the best way to use them.  At first, there was much debate about their utility.  Were they doing anything?  Also, we only had two, should one of us use both or each of us use one?

We were taking our time, taking pictures, and enjoying the beautiful hike.

After what seemed like a long time, we emerged from the shadowy woods.  Though we had climbed quite a bit, we were still well below the tree line.  Here is where we encountered our first other hikers. 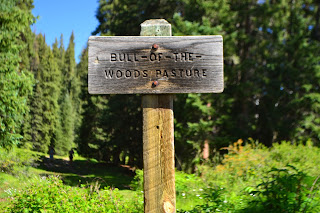 We were also treated to the first scenic views afforded by our new elevation.  The sign said it was Red River Canyon.


Then back into the forest for some more twining trails heading ever upward.

At this point we are feeling great.  We are a little tired, but surely we are halfway there or so.  There is still time for pictures and scenery.  Yeah!


That valley below is where the car is parked.  We have gained some pretty good elevation.  We were so naive.  :-)

Continuing on the trail, we surprised someone.


Then we broke free to a ridge with a view and got a reality check.

Seriously?  We had been on the trail for close to three hours by this point.  It was nearing noon.  The afternoon storms can arrive any time...well...after noon.  We still haven't cleared the tree line yet.  We checked our altitude and it was around 10,800 if I recall correctly.  Well now...I guess we better get moving.

Right after we take some more pictures.

I made a video of this meadow because of the sound.  It was covered in grasshoppers that made a loud clicking noise as they flew around.  But then, back to the climbing.

Then...finally, getting above the tree line.


If you look closely in the above picture, you can see a faint line just above and to the left of the sign.  We don't know it yet, but that is the trail.  That trail is also where we seriously considered scrapping the whole thing.  But for now, we are happily trudging along.

As we crested this ridge something weird happened.

What?  Why are we going down?  Surely that peak just in front of us is Wheeler...right?  I guess we are just going to cross the valley here.

Nope...back down below the tree line.  I don't know why the trail doesn't just cut across that valley, but it doesn't.  It switches back away from the peaks and drops down well below that tree line.  Then we had to start climbing again.  It was about this point when the dark clouds started rolling in and we heard the thunder.


We knew we were up against the weather and hadn't been stopping for pictures in some time.  The dark clouds were building and we knew it could start pouring any time.  The thunder came from downwind and it was very far away.  From what we could see, it appeared as though the storms might go around instead of over us.  We stopped and took a few pictures.  This may be as high as we got.


This next picture is interesting because you can see the spot on the ridge where we were when we took the picture of our moment of uncertainty.  The faint zigzag scar on the side of the hill.

The trail took us down into those trees, then brought us back up.  We decided then that we would press on unless and until we heard another clap of thunder.  We were pretty high above the tree line by this point and decided we would take the straightest line down if we needed to make a run for it.  You can see we put jackets on because it was growing a lot colder.  In this next picture you can see the switchbacks leading us up the slope.

Of course we think that is Wheeler Peak and of course we were wrong.  We were tired and still in fear of the weather.  We decided pretty much to take the trail for Williams Lake when we got there. Making it to the top of the mountain didn't seem as important as not getting struck by lightning, but we figured we were closer to the Williams Lake trail head than we were to the tree line going back.  Of course we were wrong, but we didn't know that yet.

Luckily we were distracted by pretty things.

Again, we were just trying to make good time at this point and we weren't stopping for pictures.  So there is a gap here.  Also, it was cold enough, and the backpack straps were digging in enough, that we were experiencing some finger tingling.  The wind was a constant 30-40 mph and cold.  We kept going, looking for the intersection of the trail.  Instead, we go here...


That hill you see to the right of the above picture is the peak we though was the peak.  Obviously not.

Ahead on the trail was a saddle between the two peaks.  In the middle of the saddle was a large stack of stones marking the trail for Williams Lake.  Beyond was Wheeler Peak.

What would you do?


We dropped our backpacks and headed up.  Just beyond where you can see, we reached it.


Of course, there was a pile of rocks off to the side there, which is technically the highest point.

Then we tried to leave and found our way blocked by a vicious, killer marmot...with fangs.


We exercised what wits we had left and flanked him. Then we hit Williams Lake trail and started down.

When we did our research we decided to take Bull of the Woods up because Williams Lake was described as steep and rocky.  Uhhh...yeah.

Luckily we had the Pica to keep us company with their shrill whistles.  I didn't call them Pica, I called them large mountain hamsters.


Once we got through the scree, it would be back to good, easy trail.  You can see how exposed we would have been had the weather turned.


The rest of the way we didn't take many more pictures.  We were tired and hungry and sore.  At the base of the mountain we stopped in an interesting meadow for some pictures before we made our way to the ski resort and a 2-3 mile walk back to the parking lot.

The stats:  15.1 miles covered in 11 hours.  Net elevation gain of 3,800 feet.  Two weary travelers.  Thanks Grandma and Papa for watching the kids so we could become mountain climbers.

If you want to go we would suggest taking trekking poles, they really help.  Also, were we to go again, we would want to be on the trail no later than 0700.  We really started late and got lucky.