Had to get out of the house today.  It has been raining and flooding almost constantly for the past two weeks or so.  No complaints, I know how much this area needs the water.  But, when the weather reports says cloudy more so than rainy, it is time to get out and enjoy the mediocre weather!

Our expectations were pretty low.  Let's just get out of the house, maybe go for a drive and see the coast.

The coast was beautiful.  We were headed out to Point Reyes National Seashore.  It is always fun to go find the very pointiest tip of land you can find and get there.  Mountain peaks work, so do peninsulas.  Heck, I'll walk out to the end of a dock just to get out on the pointy bit. Along the way we came across this view down to a beach where the surf was pounding like crazy.  The sign said South Beach, so we went.  It wasn't anything like the one in Miami.  This one was better.

We kept seeing signs for the lighthouse.  That and it is on the high pretty place up over there.  So, of course we had to keep going.

We drove up to the headlands and got out to walk around.  The lighthouse is closed on Tuesday, Wednesday, and Thursday.  It was Thursday, so we settled for just walking around.  We saw this hawk hovering over a field in the 20 knot straight winds.  He hovered, adjusted, hovered and adjusted for quite a while.  This is when I kick myself.  ALWAYS BRING THE ZOOM LENS IDJIT!

Fine, we will just walk down to the lighthouse.  SQUIRREL!  or more like, TREE!

Not they don't Max!  Light houses are cool!  And you never know what what you might see on the way.  After all, I forgot to put the zoom lens in the backpack, so it is likely to be really cool!


Seriously though, a whale and a peregrine falcon.  How cool is that?

A little more time to soak up the vibe of being at a high pointy place with a lighthouse and a whale and a slightly snobby peregrine falcon. 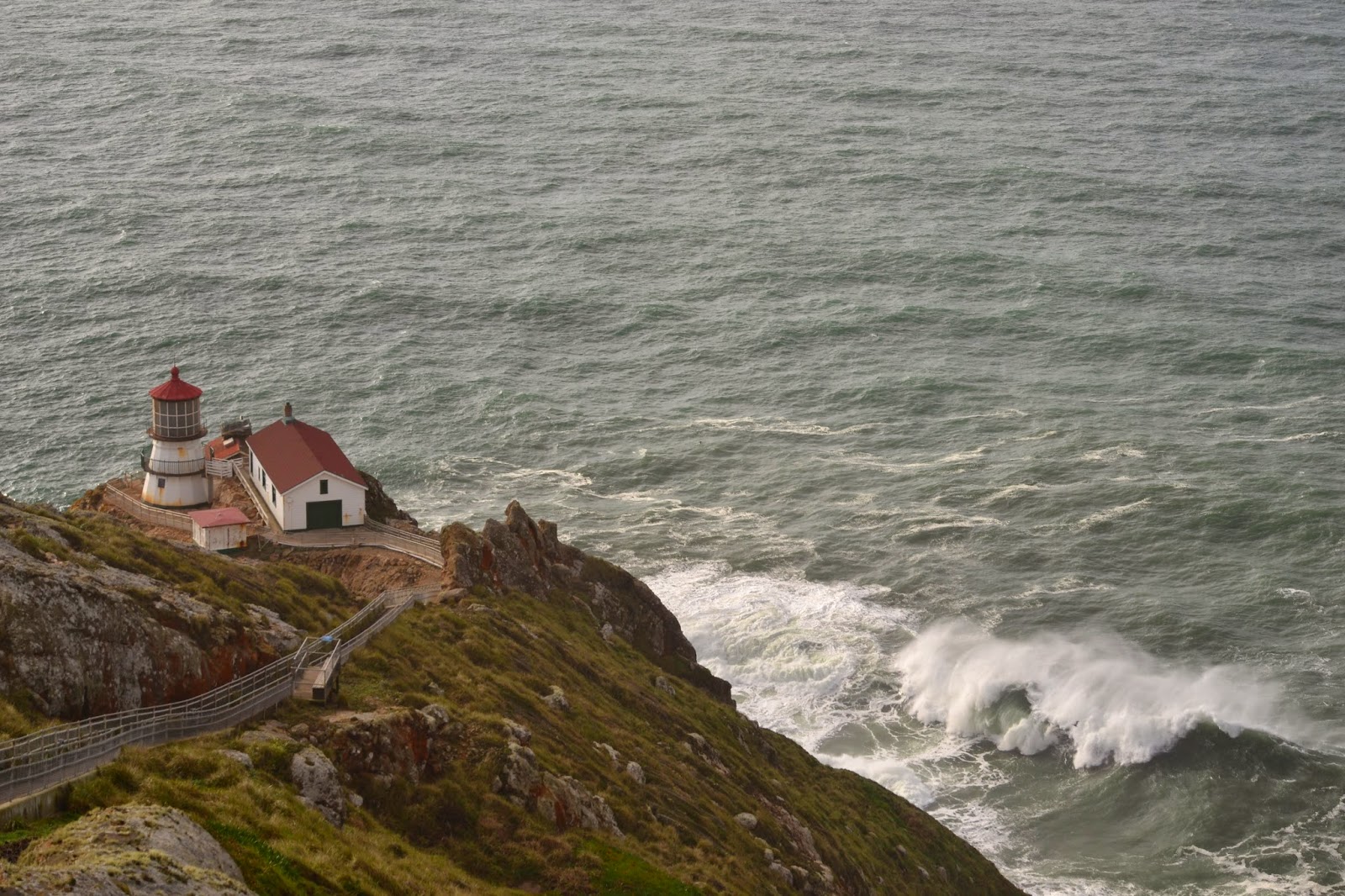 Then it was back toward the car.  Oh yeah, and the trees.

So it just goes to show.  Some times it pays just to get out of the house.

Posted by Adventure Nickel Farm at 10:38 PM No comments:

We loaded up on the stretcher for the ambulance ride to the other hospital.  As an ER nurse, being wheeled out of your own ER on an EMS stretcher is a disconcerting feeling to say the least.  Sarah had Michael and was waiting to follow us.  We were set up and drove over.  When we got there, we were met by the special pediatrician that my ER doctor had contacted.  About that time I got a message from our good friend Ruthie saying she remembered working with a pediatrician from Yakima when they were on a mission trip in Cameroon or something.  Did we know Dr. Harthcock?  Shortly thereafter, Dr. Harthcock, the specialist my ER doc had called, walked in to the room and introduced himself to Sarah.  Weird, small, and amazing world sometimes.

Max was still on an insulin drip and feeling pretty bad, but improving.  Sarah was now there and trying to get up to speed on everything.  There is a huge initial shock to get over and I had several hours worth of a head start.  We talked with the doctor and with each other.  Every little way we could think of to try to deny the truth at least crossed our minds, but if there is one thing we have a lot of practice at, it is adapting quickly to change. We don't have to like it, but we do it.  This one was going to take a while.  With Sarah there and as caught up as it is possible to be, I was able to go lie down on the couch and pass out for a bit.  It was around 11 or so, I think, and I hadn't slept much.

I have some experience dealing with diabetic ketoacidosis.  I have seen many patients with that particular problem.  I saw what was happening with Max fit the pattern I expected so now I could relax.  Sarah, on the other hand, was blindsided.  I am amazed that she dealt with everything so well, but she did.  Mommy bear looked down at her baby and did whatever it took.  It was nice to know that whatever happened, Sarah could handle it.  Our next job was to get Max on board and up to speed. The first day and night he was still in bad enough shape that he didn't really fight us about it.  Sarah wanted to stay that first night with him, so I took Michael home with me.

On the way back from the hospital Michael asked what would have happened if we hadn't taken Max to the hospital.  I told him that Max would have gotten sicker and probably would have died if we had waited too long.  There was a long silence as he processed that.  Then he gasped and with a bit of a hitch in his voice said he just thought Max's tummy was sick, he didn't know it was that serious. From that moment on, Michael became a superlative big brother.  He read everything he could get his hands on about diabetes and has never once has complained about subsequent diet and lifestyle changes.

The next day, Max was improving.  This was obviously awesome, but one thing became a problem.  Now that he felt better, Max couldn't understand why he couldn't go home (and he couldn't eat...he was STARVING), the shots had to keep coming and we kept having to check his sugar with a finger prick.  This led to a blow up when he refused to cooperate with an insulin shot.  The ER nurse in me took over and I tried to convey the sense that you can't fight this the same way you can't fight the oncoming changing of a season, or the turning of a tide.

On the second and third day we had another doctor from the group.  She was awesome, I wish I remembered her name, I think it was Dr. Mendoza.  Something other than the obvious problem was happening and it took Sarah a bit to figure out what it was.  As if she wasn't dealing with enough right about then.  The doctors and nurses all had heard that I was an ER nurse.  So they would come in to do some education or talk about Max and they would talk to me.  They would also talk to me in such a way that skipped over valuable information that they knew I would already know, being a nurse. Sarah, the one who probably needed to hear everything most, wouldn't get everything she needed to hear.  It got bad enough that she would get mad and I would have to sit away from her or behind her to make sure the educators and doctors talked more to her than me.  But, we figured it out.  We work well as a team.

By the third day, they agreed to release us.  They told us the deciding factor in discharging us wasn't actually Max's health.  They kept the initially diagnosed pediatric patient in the hospital until they think the parents are ready and able to assume care of a kid with diabetes.  I guess we convinced them.  That is one of the moments when reality set in.  We would now be responsible for all of this...every day.  Sugar checks, insulin administration, carb counting and all of that was now on us.  Finding the right supplies and making sure everything was on hand and stocked up in sufficient quantity was on us.  Who am I kidding?  Mostly it was going to be on Sarah.  I am surprised she didn't walk out of the hospital a few inches shorter from the weight of all the new responsibility.

They thought we were ready.  Max was only too happy to get the IV out and head home where, he assumed, we would get back to normal at last.

Our journey had only begun.
Posted by Adventure Nickel Farm at 11:10 PM No comments: