Third call today and in port so, off we go.  We woke up, ate breakfast and headed out for a day of walking aimlessly around Willemstad, just the way I like it.

I like Curacao, at least the parts I saw.  We stuck around town mostly.  We crossed the pontoon bridge, Queen Emma bridge.  It is a large pedestrian bridge that has a pivot point on one end.  It spans the channel from the sea.  When a boat comes through, an alarm sounds, the gate closes and if you are stuck on the bridge, you ride it out as the pontoon bridge swings open like a gate until the boat or ship is through and then swings closed again.  The kids were disappointed that they didn't get to ride it.  We just missed it once though.

We wandered over to the floating market which is where boats laden with fish, fresh fruits and other produce pull in and open stalls on the street to sell their goods.  One guy charged us one dollar for three bananas.  I didn't want to argue with him, so we left in search of a better deal.  It wasn't long before we were hungry.  You can use Dutch Guilders or US dollars here.  Most of the stall were apparently going to require some haggling and the restaurants were aimed toward the higher end dining so we found a McDonalds and gave in.  Yep, I used to groan when Pat and Ali over at Bumfuzzle raved about Macca's, but I think I get it now.  I think it would be different if it weren't for the kids, but I get it.

After lunch we wandered some more and ran into Emma, not the queen for whom the bridge is named, but the Club HAL worker who is better than a queen to the kids anyway.  She bummed around with us for a while too just reveling in being off the ship and away from people asking us which way is forward and how to get to the Vista lounge.  We took her through the sites we had found that morning and just enjoyed the day.

A few notes about Curacao.  The people seem really friendly and nice.  They saved places in line for strangers at a crowded McDonalds.  There were a ton of high school kids around as it was lunchtime and it seems as though they all went to Macca's for lunch.  Everyone was smiling and enjoying themselves.  They don't, however, seem to understand how trash cans work.  There is a ton of litter everywhere.  Same for Aruba really.  The plastic bag epidemic is pretty bad around here.

And now, if I can get them to upload, the pictures.

OK, after an hour of trying, not one picture was fully uploaded.

I will try more later. 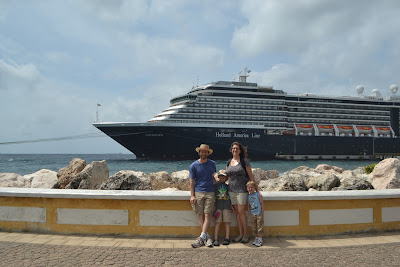 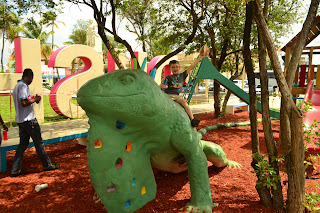 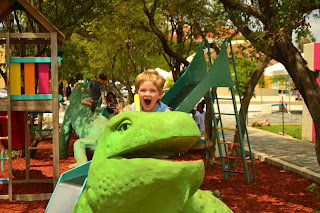 And this is a three picture series:  "From the Left"  But seriously, I didn't intend them to all be from that perspective, it just kind of happened that way. If I get a chance, I think a close up of the details on some of the graffitti would be a fun picture. 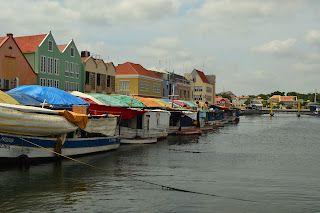 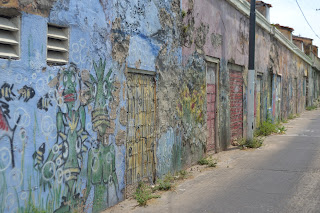 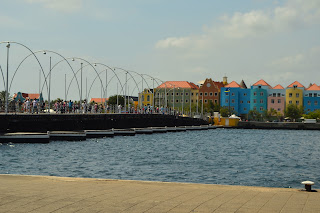 Posted by Adventure Nickel Farm at 6:31 PM No comments:

After a fairly non-descript day at sea, we arrived this afternoon at Aruba.  I was first call, but Chris, the legendarily generous soul she is, offered to take a few hours of my day so I could get out with the family and relax.  It was my first real chance to get off the ship in a non work capacity and just hang out with the family.  So, after a somewhat disasterous all hands crew abandon ship drill, we left.  I say disasterous because Sarah got turned around by a misguided traffic director and was very late to her life raft and was chastised a bit before being shown how her and the kids life jackets were tied incorrectly.  Of course, I am on a different life boat on the other side of the ship.

So, we did get ashore eventually.  My apologies to the more visually stimulated readers out there.  I didn't bring the camera.  I didn't want to leave it sitting out on a touristy beach if we all wanted to get in the water.

Ahhhh, where were we?  Yes, the beach.  So, we spent wayyy too much money on a taxi and he took us to the beaches over by the hotels.  He explained that these were the best beaches today because it was so windy.  The hotels block the wind and kept you from being scoured by the sand.  30 mph winds and fine sand can be painful.  Turns out he knew what he was talking about.  We swam and goofed off for a couple of hours and returned for dinner.  Nothing spectacular, but much needed.  Tomorrow I am third call and we are in Curacao with no specific plans.  My favorite.  Should be a nice day and I plan on bringing the camera.  Hopefully tonight can go back to the no call routine.  I won't count on it though.  So, off to bed.
Posted by Adventure Nickel Farm at 5:22 PM No comments:

It was Half Moon Cay day.  The kids loved it, I think it is their favorite destination.  They played and swam and then discovered the world below them.  The kids club people were there and let them use masks to see underwater.  They saw fish and coral and some pink sea slug looking thing that stung Michael when he tried to pet it.  They say pink fish, purple and yellow fish and some were as big as my head!  It was like the best day ever!

Of course, I didn't get to see it really.  When the three days of first call with no calls streak ended, it ended with a dull thud.  I was up from 0200 to 0500 taking care of a woman whose cabin mates called despite her objections.  When I arrived she was lying there {This part redacted for our more sensitive readers and to protect the privacy of the innocent - Managment.}, It was awful.  One of the cabin mates kept apologizing to me for having to do such work and I told there was an ER nurse in Minnesota right now working a 12 hour shift doing similar work that would pay to trade places with me.  Hard to feel sorry for yourself sometimes.

So, back to bed after a much needed shower and it was around a quarter of 6.  I had to be up by 7 to make the first tender over because it was Half Moon Cay day and third call isn't really a day off.  We got ashore and did all the inventory.  Then I manned the fort until a replacement arrived. While the kids were discovering the delights of an underwater tropical world, I was discovering the delights of the backs of my eyelids on the ship.  I still haven't caught up, but after bed tonight I think I'll be fine.

This evening the kids were good so they got to go to club HAL.  Sarah and I decided to go to the Officer's bar and have a drink.  After a drink or two and some fun socializing we decided to head out to the bow.  On this ship, the bow isn't really accessible to the passengers on a regular basis.  The Officer's bar opens on to it, mostly smokers go out.  Sarah and I headed out and snuggled up against the gunwale and watched the moon over the water...so romantic.  Until the spotlight from the bridge lit us up.  I turned and waved and the light went out.  So we snuggled up again and the light comes back on.  OK, not so romantic.  We headed back in.

Inside we related our story and the wife of the 3rd officers said her husband was up on bridge watch.  I knew him.  So when he and the staff captain show up in the bar a few minutes later we find out they thought I was the HRO and she was a cast member and they were getting the gossip of the century.  They were quite disappointed to find out it was just an old married couple.  Sigh.

It was really nice hanging out and getting to know some of the people onboard.  They are obviously characters.
Posted by Adventure Nickel Farm at 7:11 PM 2 comments:

We were in Fort Lauderdale today.  Still can't say or type that without thinking, in my best Spiccoli voice, "Lauuuderdaaaaalle."  I know, Fast Times wasn't located there, just the best voice for that cry.

So, I was first call.  A few trips out to the terminal to check on passengers.  Nothing big.  Sarah and the boys had to get off the ship for a bit and go through Customs and whatnot.  They tried to make the best of the day.  Then, back on board to find new passengers trying to find their way around the ship. And after we spent all that time training the last ones too.  Shucks.

And tonight I broke the first call/no calls streak.  Oh well, it was too good to last anyway.

Tomorrow I am third call, but it is Half Moon Cay day.  That means I get to work on the island anyway.  Oh well, to work in a clinic on a tropical island doesn't sound so bad if you are stuck in a snow storm in Minnesota or somewhere.  I guess I'll take it.
Posted by Adventure Nickel Farm at 6:29 PM No comments:

Last day of the first cruise together as a family.  It was a good day.

We have settled in enough that we are finally able to enjoy and take advantage of our surroundings a bit.  Sarah and the boys went to a towel animal folding class and came back to the room where they promptly made a towel Jabba the Hut.  Just kidding, it was better than that.  She says they are going to go to it on the next cruise and get in more practice.

Then she and the kids went to a talk about the real pirates of the Carribean.  It was an historical slide show presentation about the history of piracy.  They learned about Sir Francis Drake, Black Beard, Black Bart and Captain Kidd, among others.  Michael and Sarah loved it, Max was bored, but behaved.

We took the kids to the Lido for dinner and then dropped them off at Club HAL for the first time in the day so Sarah and I could enjoy a dinner at the Pinnacle restaurant.  That is the it's so fancy it costs extra restaurant on the ship.  We had a delicious dinner and got to talk and relax a bit.  I think we have had more alone time on this cruise than any time since we had the boys.  It was nice to reconnect like this.  I think it will do us good.

I am up late finishing, I think, the voyage report.  I still have a few things to do before we finish tomorrow and bring on another load.  Sarah and the boys have to get off and then get back on for reasons that are important to someone else.  Then we start all over again.  I hope to get a phone call or two in.

I hope everyone is doing well out there in the real world.  We are find here in our little illusory cocoon.  Maybe some more pictures soon.

Posted by Adventure Nickel Farm at 7:35 PM No comments: