What to do on a beautiful spring day in western Washington?

We weren't sure what we were going to do when we noticed the forecast called for a beautiful, sunny day on my day off, but it was going to be outside.

There are plenty of things to do around here on a pretty day. We are discovering that timing is important sometimes. For instance, the tulips are blooming.  This doesn't last all year. We decided to head down to Woodland and check out the Holland America Bulb Farm. It is closer than Skagit Valley and we wouldn't have to drive through Seattle.  Nice.


We first came to this place on the Vancouver contract in 2011.  A few things have changed since then.  See if you can spot the difference.


Okay, that wasn't bad.  There is a second difference, let's see if you can spot it in the next two.

As much fun as tulips and wooden shoes are, we were done pretty early. There was still a fair amount of time before we had to head back. What to do, what to do.  Well, last time we were here, there was this mountain. You may have heard of Mt. St. Helens.

Well, we couldn't get there.  The road is still closed until at least next month. So, we went to Silver Lake and checked out the boardwalk. 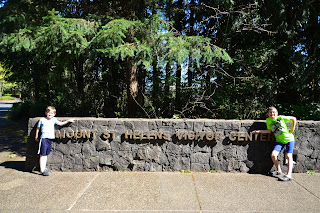 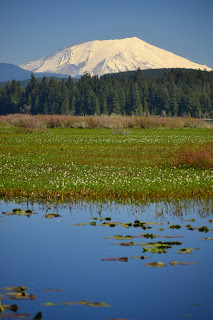 As we were walking, Sarah had the boys stop so she could get a picture of them together. Max held his fingers up behind Michael's head for the classic "Rabbit Ears" pose.  Sarah told him to put his fingers down and just take the picture. Max scowled, but did it. Sarah's picture came out pretty well.

I jumped in behind her to get a picture with the big camera and, well, Michael's timing was better on this day. 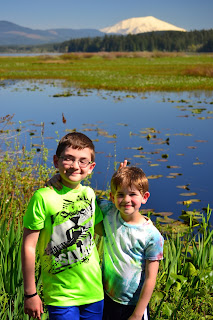 We went back to the visitor's center and talked to a very helpful and awesome park ranger about climbing Mt. St. Helens.  You have to reserve a day to do it. I was so tempted.  Not yet.

But, the ranger was cool.  I threatened to put her picture up.  If she wants it down, I'll remove it.

Then it was back to Olympia in time for Jiu-Jitsu and just in time to miss the sunset on Mt. Rainier.  Sigh.

One of these days, I'm going to get the picture.  Not today though. 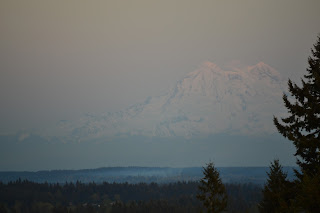 Posted by Adventure Nickel Farm at 10:57 PM No comments:

Most of the posts here are for you, the reader.  But, every once in a while, I write one for me.  Well, for future me.

This is one of those.

It is weird, sitting here on the first day of a permanent job.  I know, I know, I've done this before.  I had a "permanent" job at Holland America Lines.  I also had one at Stafford Creek and look how those turned out.  I lasted six months and three weeks respectively.

I think that is the only way I can do this though. I have to know that permanent, doesn't mean permanent. I have to believe there is an out or I won't do it.  Talk about commitment-phobic.

Nursing has never been a calling for me.  I didn't dream of becoming a nurse for years. The idea never even occurred to me until I was already past thirty. I think I do well enough as a nurse and I know I can stay a nurse until after the boys are grown, but I'm always looking for a way out.

So, I write a book.  I plan a mushroom farm.  I plot world domination. I always look for the next thing.

I don't know if I can ever catch it.  Or if any of that matters.

So, buy the book.  Maybe I can make it as a writer and see if that works.
Posted by Adventure Nickel Farm at 6:07 PM 4 comments: