We went to Ketchikan yesterday I think, it was raining and kind of dreary.  We decided to walk to a funicular car we saw in the distance.  And no, I didn't know it was called a funicular car at the time; I learned that later.  Just this time we rebelled against the constant need to document our every step and left the camera, the good camera, on the ship.  Sarah brought her phone for a quick snapshot or two.

We wandered abou the excessively touristy cruise ship port area and up to the funicular, which is a hillside rail.    It was two dollars each and Max was free.  Nice.  The kids were grumpy and didn't want to do anything, so we drug them outing and crying.

Then we wandered down to a fish hatchery which turned out to be closed and then wandered home.  Nothing exciting.

Today we cruised south, headed for Victoria.  We have decided against going out.  It seems silly when we only have an hour or two.  We arrive at 6pm and stay till 11pm.  Young party people may like those hours, heck old party people might too, but we have the kids and the kids have a bedtime.  Tonight we stay aboard.

Some other trip highlights, we found gold in Alaska.  Juneau to be precise.  And it may be glitter, or a broken pen or something, but I call it gold.  We shall soon be fabulously wealthy.  Also, today I saw a whale leap out of the water entirely.  Michael was able to see the splash, but everyone else missed it.  They could only see the white water disturbance.  I teased Sarah about it mercilessly.  They only jump for me.  And...well, that's it really.  Not a ton going on.  It has been kind of nice.  I got some sleep last night.  I hope that trend continues.

I heard that my grandfather's funeral was a party and a celebration of a life fully lived.  That is awesome.  I wish I could have been there.

Posted by Adventure Nickel Farm at 4:11 PM No comments:

Weren't we just at the equator? 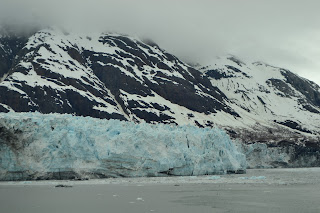 We still have fog shrouded mountains rising majestically out of the water, but what is all this other stuff?  And, WHY IS IT SO COLD?! 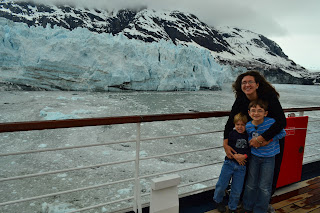 You can see here that Sarah and Michael put on their game faces for this one. We're cold, but we are still happy picture posing.  Max, on the other hand, says no way.  It is COLD out here.

So, yesterday we were in Juneau.  What do you do in Juneau?  Glad you asked.  If you are the Adventure Nickel clan, you look around... 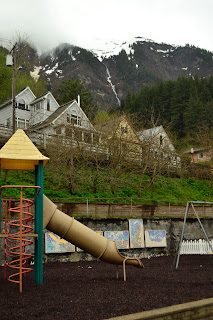 WE get some coffee, good coffee - not ship coffee, and hot chocolate for the kids.  Then we wander around where Sarah says she saw a park listed on a map.  Of course, what is that in the background?  A mountain.  Is that a waterfall cascading thousands of feet down the side?  Yep.  So we wander some more, conspicuously up the slope and closer to the waterfall until we find a staircase leading...somewhere. 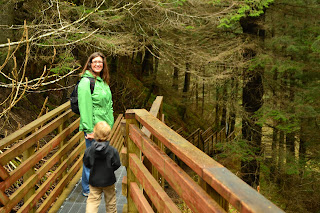 You can tell by the grin that this was Sarah's cunning plan all along.  The staircase led down to a soggy, muddy, baseball field.  We crossed it, lured by the sound of a rushing river and found...a rushing river.  With a trail alongside.  We walked the trail a bit until we found a river crossing.  It was very pretty. 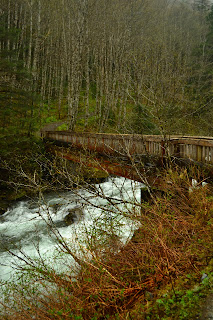 So we...uhhh...crossed it.  We continued the trail until we found a stream running across that was too rough to try to walk through.  Above we spied another trail and we hiked cross country until we made it.  Did I mention it was raining?  It was raining.  And slippery too. No matter, we hiked on until we again reached the slightly intimidating stream.  Then we turned around and hiked back out and into Juneau to return to the ship for dinner.  A few pictures: 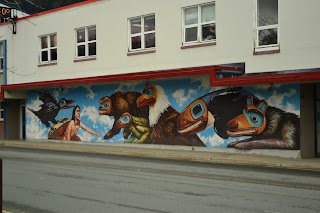 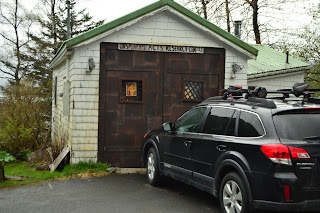 Today was scenic cruising.  We sailed up Stephen's passage and saw Norris Glacier. 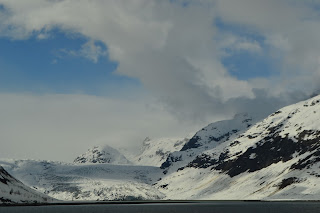 Hard to understand without a sense of perspective, but that glacier is much taller than the ship.  We obviously couldn't get very close to that one, so we got close instead to Marjorie glacier.  Which was featured prominently in teh opening montage, waaaayyyy up there on top.


So, I'll show this picture.  I had just walked out on the deck and found a young woman had fallen.  Just as I determined she was OK, I heard sharp craking noises like tremendous Rice Crispies accompanied by several people shouting, "Look!"  So I turned and hipshot this picture.  You can see the snow fall after a large piece broke off and fell. 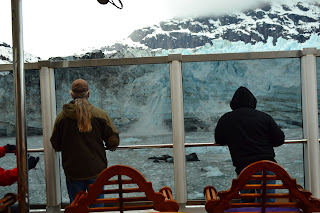 We were close enough to hear the popping and the groaning as the glacier moved.  You could feel the cold radiating off the 200 foot high walls.  It was pretty cool.  As we sailed around, scenic cruising, we would occasionally pass an iceberg the size of a school bus. 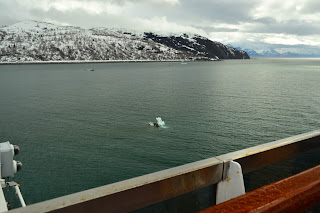 OK, so maybe a Volkswagon bus.  There were bigger ones too.

And in case you are wondering why this is such an awesome and exceptionally well done blog post, it is because I am up standing watch with one of the two disembarks tomorrow in Sitka.  So, I had time.


Welcome to Alaska.
Posted by Adventure Nickel Farm at 10:04 PM No comments: