Man, I got a lot done over the last few days.  I thought the rebuild would be the harder part, but it hasn't been as bad as I thought.

When last we spoke, I had just magicked the y-bridge back together.


Working back out and trying to go in reverse order according to my notebook, it was time to rebuild the fuel system.

A couple of pointers.

Don't torque anything until you are sure you have everything where it goes. I forgot to put the bracket that goes on the driver's side common fuel rail and had to pull it off.  Take detailed notes, better than mine, about the order in which you removed the fuel lines, it will help.


Right about here, the pictures start to get a bit spotty.  Two things: First, the lines only go on one way and if you were good about labeling things as you took them off, putting them back on is pretty straight forward.  Second, it has been cold here... Really cold.  Temperatures inside the garage were probably high twenties. Stopping to take pictures just didn't always occur to me.

This is the next picture I took.  Fuel system is largely put together and I had the air intake tube in as well as the thermostat housing on.

At this point I was just following the sequence in the notebook.  I took a couple pictures when I remembered to.  They were somewhat random. Hypothermia will do that to you.

I'll try to remember what I was thinking.

Then there was this one.

Fuel filter bracket.
This next one gets an explanation.

I put in the glow plugs. Then prior to installing the ignition wiring harness, I pulled the retaining nuts off. Notice the heat shield surrounding the exhaust manifold?  There is a gap between the manifold and the shield. It's a pretty small gap. There is really only one nut in the entire engine bay that could fall into that gap and cause you to pull off the heat shield to get it out.

Things were progressing pretty well.  Using the pictures from the tear down and the order from the notebook, it went pretty well.  Then I go to the wiring harness.  The hydra.

It wasn't as bad as I had feared.  I labeled the glow plug wires and injector connections. With those in place, everything else fell where it was supposed to. The engineers were pretty good about making sure that no connectors were alike so things couldn't accidentally be plugged in where they didn't belong.

Then I started putting on big things. Things like alternators and AC compressors. I also put on the thing I labeled The Big Fucking Metal Thing. I could probably give the technical name, but I like TBFMT better.  Oh yeah, another interesting note. I didn't know what things were when I pulled them off a lot of the time. So I called them one thing without realizing until later, they weren't that at all.


Tonight I go out and get a new serpentine belt, seems sill not to change it. I also get oil and coolant. I should be ready to try to fire this thing back up on Monday or Tuesday. I could probably try tomorrow or Sunday, but I work and I want a full day off to account for the inevitable unforeseen contingency.

For those playing along with the home game, these are my notes.  I won't call this a how-to article until it fires up and works. Until then, this isn't what to do so much as what I did. 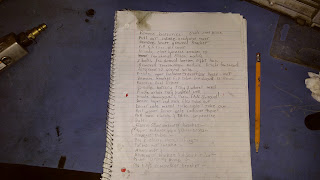