A tale of frustration

And no, I'm not talking about book sales.

Yeah, I'm mentioning the book again. I wrote a book, you would mention it too.  Get used to it.

I'm talking about working on the truck.

Where were we?  Oh yeah, freezing cold, snotty and working on the exhaust manifold.

I managed to get the manifolds and gaskets back on, after trying for way too long. The trick for me was to get the top-rear bolt in first. Once that one was started, the rest went in pretty easily. Still freaking cold though.  I got the passenger side manifold hung and then I got started on the driver side. Somehow, I discovered, I was missing three of the huge washers that go with the bolts to get the manifold on.  No problem. It was the Monday after New Year and I just went out to the auto parts store.

Of course, O'Reilly's, Autozone, and Advance Auto didn't carry anything that big. They referred me to a Fastenal store and a local place called Tacoma Screw Products. Both of them were closed for a holiday.

Try again the next day.

Fastenal was a no go, but Tacoma Screw had some washers that would work.
With those on, I consulted my notebook and started on the valve covers. I never took off the upper covers, so I just had to make room for the full set up.

Just as much awkwardness reaching some of the bolts going on as coming off.

The next thing on the list was the injectors. I have brand new injectors from Injectors Direct.  They are shiny. I tried to make every other fuel component equally shiny in the areas that count.
You have to attach the hold down bracket to the injector before sliding it into place. You can either push it in hard enough to make it seat of let the bolt do the work for you.

Another frustration. After putting in all the injectors and getting them torqued down, I realized that the little plates the hold down brackets clamp on to had come off while I cleaned the valve covers and I had to pull four of the injectors back out and put them back in. 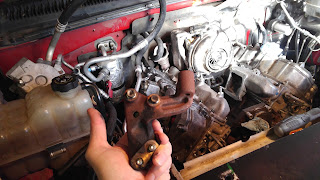 It took some extra time and gymnastics, but I got it on there and torqued to "As tight as I can get it".  I don't have an open torque wrench. Some things you just can't reach.

The next thing up was the CP3 pump. I looked up lots of stuff and it looked pretty easy. Just put it in. The hardest part is getting all the stuff out of the way and I think I'm pretty good on that note.

I tried for two freaking hours to get that thing in. I pulled, I wiggled, I cussed, every mechanic thing I knew how to do.  I pried on it and tried everything.  I resisted the urge to hit it with a hammer.

But oh, what and urge.

Eventually, after anguish and anger and a sandwich, I puzzled it out. 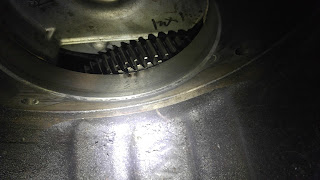 These are the gears inside the housing into which the pump installs. Notice that, for some reason, there are two gears together instead of one.  They were imperfectly aligned and the pump gears were hitting the face of the second set of gears.

So, I manually turned over the engine a few times, watching the gears as I did. When I found a section that seemed a little more together, I tried the pump again.

Next on the list was installing the Y bridge. Yeah, that should go well.

First, I cleaned it.  If you will recall, it looked like this.


Well, I figured it was probably fine, but then Sarah's voice came into my head and told me everything was better if you cleaned it.

So I cleaned it.

And installed new gaskets that came with the kit from Merchant Automotive.


Reaching the bolts and nuts for this was pretty much another pain in the ass.  At least it was an expected pain.  The four on the front were easy. The top, driver's side, rear was easy. The other three were not.

So, with the one above, I put my right pinkie finger under it and my left angled in from the top. Meanwhile, I had a flat blade screwdriver prying the piece into place which I was pressing down with my right forearm while I was laying across the top of the engine.

Did I mention it was below freezing?

I should have just paid someone.

For the bottom driver's side, I used a magnetic bolt retriever to push the nut toward the post. Then I met it with a 10 mm socket on an extension just over the post and screwed it on


The passenger side bottom one was another thing. There is this metal coolant tube in the way. I couldn't get the socket on it at all.  So I used the magnet to hold it on the post while I used a flat blade screwdriver to push the nut edge and turn it on.

This took a while.

Then I put the heat shield on, the common fuel rails and the pipes to the injectors, but man, that was enough. I was too busy and it was too late to fool around taking pictures.  You'll get them on the next installment.  For now, whiskey.