I know, I know...we need to get out and do something.

Then Sarah showed me her list.  She has compiled a list of things to do while we are here in Richmond.  It is quite thorough and extensive.  We realized that we needed to get cracking if we hoped to even really dent this list.  As we scanned down trying to figure out what to do, a hike appeared.  With waterfalls?  How can we resist?  After all, it is only a two hour drive away.

We drove east past Monticello.  No dear, don't tell the Jeffersons we are passing by, they will insist that we stop in for a visit and we simply haven't the time. Then turned south and wound our way through narrow country lanes to Crabtree Falls.

We were greeted with a warning.

Of course we wouldn't let minor inconveniences like death stand in the way of a good adventure!  Onward!

The sun was traversing the sky right along the top of the ridge which left us in shade for the majority of the day.  We hiked up along switchbacks that carried us near to, then away from the water.  We could tell we were getting closer to the stream by the crash of water, the colder temperatures and the humid air.  Crabtree Falls isn't just a single waterfall, or even two.  It is a long series of smaller falls interspersed with three or four larger cascades. The cool part about that is that each time you switchback, it takes you to a new segment of the waterfall.


Being a picture nerd, I of course have to try the slow shutter speeds that make water look so cool.  The angle of the sun was not friendly to my efforts, but it was fun anyway.

We hiked up and up. 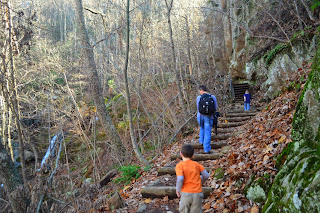 The lack of foliage made it easier to see the falls, but we couldn't help but wonder how beautiful everything would have looked with the colors of fall or the green growth and flowers of spring.  Can't let a little thing like cold stop us though.  Speaking of cold, you will notice a striking lack of warm weather clothing. We underestimated the cold and suffered a bit for it, but nothing major.  It was colder than we looked. 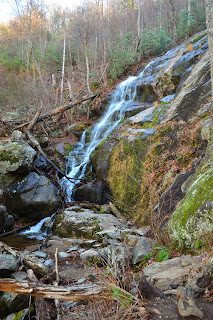 Something weird happened on this hike.  I almost don't want to mention it, in case I jinx it or something.

The kids were enjoying it.  Heck, they were leading the way at times.  They even, gasp, seemed eager.  I blame the  mushrooms for Michael.  No, no, I didn't drug him.  Seriously, I wouldn't do that.  He has become quite interested in mushrooms and fungus.  We bought him an Audobon Society Field Guide to Identifying Mushrooms and he dove right in.  I told him that we would see a lot of fungus on our trip and he couldn't wait.  The downside is that I now have a dozen pictures of fungi and slime molds.  Awesome. 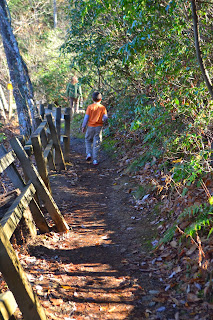 Even Max was having fun hopping around on the trail and climbing obstacles.  We reached a nice spot to sit and have a snack.  I took the opportunity to try some pictures in less than awesome lighting.  Oh well. 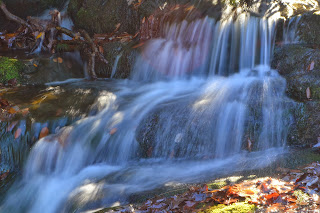 Shortly after resuming the hike we found this cool little spot where several boulders had fallen together to form a natural shelter with a small passage through the center. The kids, of course, loved it. 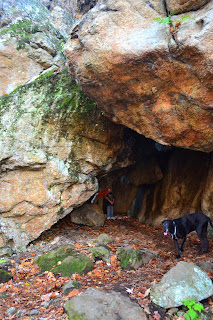 Eventually we had to get back on the trail.  It was 1.7 miles each way with an elevation gain of just over 1300 feet.  We continued to wind our way through switchbacks and enjoy the view of the various falls.

As we got closer to the top, the hoped for sunshine continued largely to elude us.  Instead, the wind picked up.  We could see the top though, and it looked sunny. 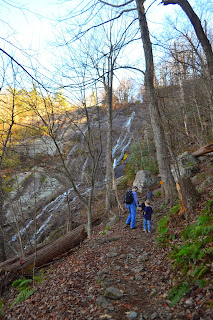 We reached the top and found this poignant sign.  Kleenex up.

We settled in for more of a snack/lunch.  The view was nice, but of course we couldn't help imagining what it would have been like in a prettier time of year.  The sun was nice, but it was pretty windy.  Still a nice hike and not too strenuous.  We enjoyed ourselves for a few moments and then started back down.

Once we reached the bottom, there was a neat little footbridge that used to be the way to the trail.  When they installed the bridge for those newfangled horseless carriages, they kept this one around for the pretty.  And I thank them for it.  A good hike.  We needed that. 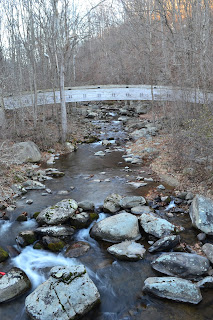 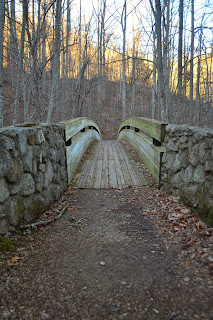 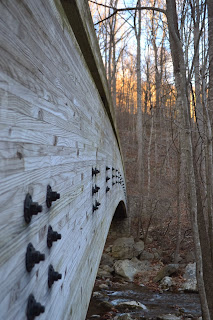 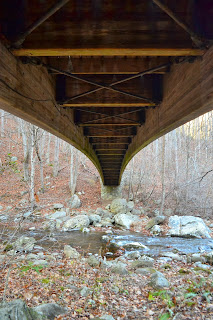 Oh yeah, then there was this.


Posted by Adventure Nickel Farm at 7:33 AM